Before their respective hot laps, David and Ryan line up on the starting line for a few practice starts. Insurance reasons regrettably mean that crankandpiston.com has not been given permission to drive the MINI on-track: barriers built to withstand the impact of a 160kg go-kart wouldn’t stand much of a chance against a car that weighs seven-times more should we get our braking wrong, the dent in our insurance premiums likely to be heftier than that left in the barrier. I’m certainly not worried though. Both Ryan and David have worked at the Kartdrome for many years and know each corner, chicane and braking point like the back of their respective hands. Until relocating to the Middle East, David even enjoyed a burgeoning Formula Ford single seater career in his native UK until the sponsorship money ran out (the ‘Pamela Stephenson’ stickers still adorn his helmet today). More importantly, both men – though they try to hide it during the build-up – are very competitive. This may not be the most traditional of races they have undertaken at the Kartdrome, but neither of them wants to lose.

Ryan sets off first, his first lap spent warming up the tyres and brakes, and as he enters the final left-right-left chicane before the start-finish straight, the MINI’s 2.0-litre turbocharged four-cylinder engine to give himself as much speed onto the straight as possible. Barrelling past us and already up to 30kph, the Cooper S hurtles past the starting gantry and the stopwatch begins its count.

Into the sweeping right hander at turn one, the MINI is utilising all 192hp at its disposal, Ryan staying tight to the inside of the corner to keep the speed up and give him a better braking line into the hairpin right at turn two. Standing on the brakes, progressive deceleration means he’s quickly through the hairpin, the upcoming tight left hander and across the bridge, Ryan flicking from first to second through the paddle shift six-speed automatic gearbox. His next sequence is a little trickier, a tight left-right followed by a left-handed hairpin that tests the front tyres, apex speed critical if Ryan hopes to secure a good lap time. There’s barely a trace of understeer (despite MINI’s traditional front-wheel drive setup) whilst the back wheels refrain from twitching even over the slippery kerbs. The Cooper S is soon into and out of the left-handed chicane. 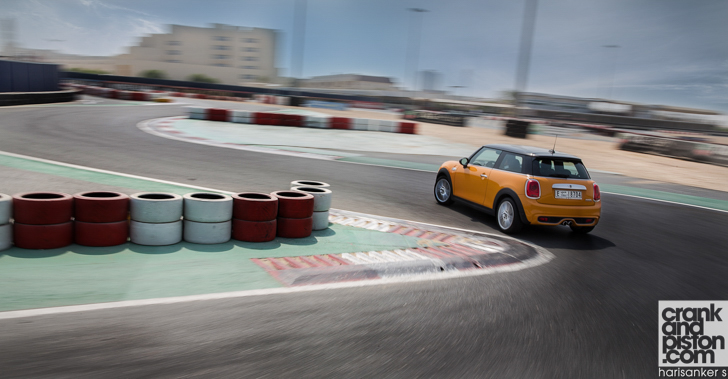 Though not a straight, the long sweeping left hander under the bridge allows Ryan to get the MINI up into third gear and well on the way to 40kph thanks to linear acceleration before throwing the anchor out into the left-right chicane and the long, slow right hander that follows. Once again, the MINI has to stay on the apex for the quickest line, and once again, the weighty steering and solid grip means Ryan has no problem keeping the Cooper S out of the barrier. Through another tight right hander and onto the back straight, Ryan has just enough time to flick into second gear before braking hard into the final complex, the MINI dancing through the tight left-right-left chicane and taking a little kerb on the outside onto the main straight to nail it to the start-finish straight. Ryan has done all he can do. Now it’s David’s turn in the Sodi go-kart.

Like the MINI, the go-kart takes a warm-up lap before firing onto the main straight for its ‘qualifying run’ as the crew has now dubbed it. Aware that the MINI has the legs on the main straight, David hunkers down in his seat and tips his helmet forward to reduce wind resistance in the hope of gaining just a few extra kph (like I say, both guys are pretty competitive). Into the tight second corner the MINI is still ahead, but the go-kart’s nimbleness through the following right-left-left-right-left means the Sodi has hauled in the gap as David heads underneath the bridge. On the starting gantry I have the stopwatch running, and am amazed how much the MINI is keeping the go-kart in its sights. Barely a second covers the pair as David breaks from underneath the bridge into the uphill off-cambered chicane, the back end breaking out slightly as David leaps back on the power again out of the corner. But the first half of the lap includes two long acceleration zones. Through the final twisting section of the Kartdrome, the go-kart must surely pull ahead…

Back end out once again as David exits the final corner, he hunkers down behind the wheel one final time down the start-finish straight, Ryan – off-track and enjoying the MINI’s Bluetooth – can’t help but smile. Nor for that matter can I as I turn to look at the stopwatch. 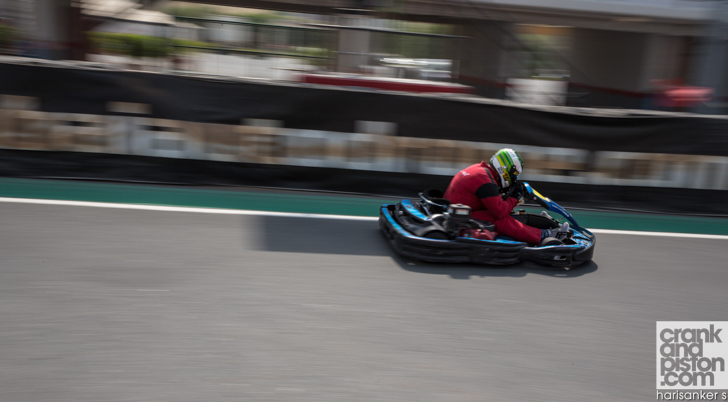 It’s not often, as some of my wordier pieces on crankandpiston.com will attest, that I’m left speechless. But as I stand here, the stopwatch on my iPhone paused and bearing a laptime I can barely comprehend, it’s about the closest I’ve ever come. Around the Kartdrome’s 1.2km National circuit, the MINI Cooper S managed a 1m 18.36s laptime. The Sodi go-kart managed 1m 18…

Now before claims of cheating start flooding our comments box, there are a few mitigating circumstances we should mention. Firstly, the Cooper S was brought to the track with limited fuel for the (naïve) purposes of weight saving.

The sweltering temperatures – well on the way to the mid-50s – have also affected the durability of the go-kart’s tyres: so hot was the track surface, the go-kart spent most of its run skating and spinning for grip, unlike the much heavier MINI which offered better traction. Perhaps the key reason behind the upset though was the go-kart itself. With David sweltering in a full flame-proof race suit and helmet, sending him out for lap after lap to warm up the tyres would be uncomfortable at best and potentially dangerous at worse (jn 50-degree temperatures, heat exhaustion is a genuine concern). David is confident though that given another few warm-up laps, the go-kart would easily have been six seconds faster than the MINI, a point he proves by heading out and immediately setting a time almost a full second faster than his previous. 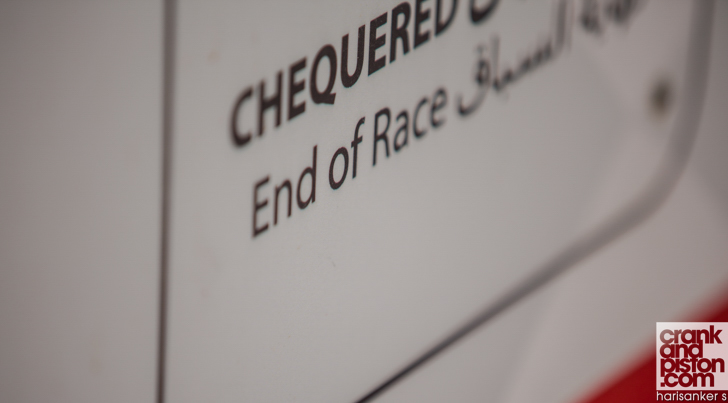 You may think then that this test is ultimately pointless. And you’d be wrong. That the MINI’s time compared with the go-kart offered us a delightfully Hollywood end to the feature was just a happy coincidence. Don’t forget though that the point was not for the Cooper S to beat the go-kart, but for it to demonstrate ‘go-kart feeling’.

Few could deny, given its weighty steering, responsive throttle, superb poise and frankly amazing nimbleness on both the straights and through the corners, that the new MINI Cooper S demonstrated just that at the Dubai Kartdrome. Let’s also not forget that the new $44,900 Cooper S, complete with air conditioning, satnav, infotainment, leather seating and 2+2 seating is no stripped out track day car. Could a drive in the brand new MINI ever be an effective alternative to a true go-kart experience? Probably not. But like our test model today, it may surprise you if you find yourself on a track with it.