Our long term Volkswagen Touareg ends its time on The Management Fleet. And our man has some final thoughts on VW’s largest SUV across multiple terrains

All change this month, with James racking up his final kilometres in the Volvo V40 and me taking the weighty keyfob for the Volkswagen Touareg. And I certainly don’t feel short-changed doing so.

I’ll come back to that in a moment though, since there are a few things I’d like to get off my chest. Firstly, let’s talk first about the 3.6-litre V6. Having taken VW’s largest SUV for a spin on the sand several times this month – and again, I’ll come back to that – due credit must go to that mighty wave of torque, which starts to build from very low rpm. It’s just disappointing that an admittedly pokey 280bhp does feel a bit strained in the low-to-mid range. Approach and descent angles could be better too, and given that the ground clearance is on the low side, the Touareg doesn’t feel as home on the dunes as I hoped it might be.

Of course many might reasonably be suggesting even now that, as a long-haul cruiser, the Touareg was always going to be compromised on the sand. It’s a fair point: you can’t chuck it around with the same vim as a Jeep Wrangler (or even a Toyota Land Cruiser or Nissan Patrol for that matter), but even on street tyres, rarely did VW’s largest SUV come unglued on the rough stuff. So with that in mind, what’s our final thoughts on the road? 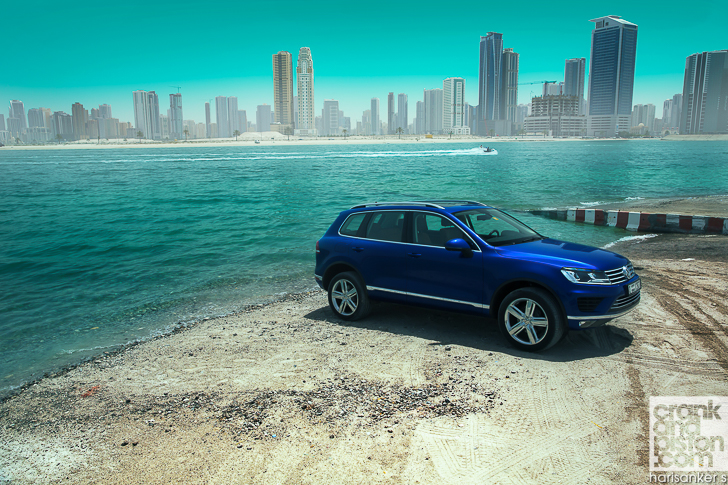 First up, despite sharing the same platform as a Porsche Cayenne or Audi Q7, the Touareg doesn’t feel as agile or nimble. It’s a pleasant enough drive if you keep your sensible trousers on. But harry the front end and body roll is inevitable, even if seriously impressive grip means the big V-Dub really hangs onto the tarmac, the eight-speed automatic sending power and torque to all four wheels for impressive traction out of the turns. Not a hustler then either. What the Touareg categorically is, however, is a heavy-duty workhorse.

Space on the inside is insane: the boot can easily swallow an crankandpiston.com photographer with equipment alongside, there’s enough room on the back bench legitimately for those of us above six-feet, and headroom is monumental, despite the Touareg being ‘only’ 5.5ft tall. Cabin design is as you would expect from any self-respecting Volkswagen, namely well-built, plush and heavily veneered. Tick, tick there. The ride comfort is also amazing, with big, broad seats that swallow you completely and supple damping for a floaty ride comfort. The only cabin noise comes from the low rumble of that V6, slightly more intrusive than I expected. Kilometres simply flick by, making the Touareg one of the most impressive day-to-day-ers we’ve arguably ever had at crankandpiston.com. That should say everything.