Can a 900bhp PRO4 Trophy Truck beat a 10,000bhp dragster on the quarter mile, even with a head start? Find out with the latest Snap-on Seat Swap featuring NHRA Funny Car champion Cruz Pedragon and six-time Off-Road Champion Bryce Menzies.

One video you’ve probably seen doing the rounds recently is a Snap-on Seat Swap between two-time Funny Car champion Cruz Pedragon and six-time Off-Road Champion Bryce Menzies, in which the Red Bull athlete takes a stab at the Las Vegas drag strip in a 750bhp dragster while the NHRA veteran takes an 225kph Pro4 Trophy Truck for an off-road blast at the Las Vegas Motor Speedway short track. Impressively so it must be said, with Menzies even managing to beat Pedragon’s best time on home turf. But let’s be honest, it’s the quarter mile blast to lights that we all came to see at 9m 45s, in which the 10,000bhp dragster humiliates the 900bhp Pro4 on the strip. Still awesome though.

What you may not remember though is that this is not Cruz Pedragon’s first Snap-on seat swap, the California native having jumped behind the wheel of Joey Logano’s NASCAR Ford at the Charlotte Motor Speedway just over a year ago (below) while the 2015 Daytona 500 winner popped his drag strip cherry in a 1500bhp Cobra Jet Ford Mustang.

There’s a couple of things you’ll want to look out for across both videos. The first is the barely controlled – almost maniacal – laughter as each competitor is taken completely outside of his comfort zone. The other the wide-eyed look of terror, either off the line or through the high speed turns.

You can check out more of our Video selection HERE 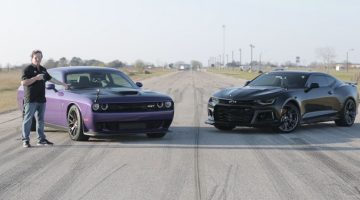 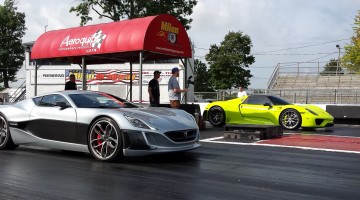