Does today’s MINI still evoke the essence of ‘Mini’? We have our doubts, especially with the Superleggera Vision concept and the brand new 5-Door Hatch.

Mini. The word immediately invokes visions of something small, or if you’re like us, the iconic car that would redefine the small car segment immediately springs to mind.

Designed by Sir Alec Issigonis, the Mini has stamped its reputation in the motoring world for its classic features and its go-kart handling style, winning countless races around Europe. The car was even voted as the second most influential car of the 20th century.

I love Minis (lower case), especially the classic Austin Mini Mark I and II produced by the British Motoring Corporation. So we were left scratching our heads when pictures of the new five-door MINI landed in our inbox.

Beginning with the Countryman, MINIs have been steadily gaining weight with each new model that leaves the factory doors. What began as a small, fun two-door car that spawned films such as the Italian Job, has now become a family wagon, perfect for carting the kids to school and doing the grocery run.

That’s all fine we say, but isn’t this a departure from the essence of Mini? Besides the irony that ‘Mini is growing into ‘Medium’, the ability of being able to cane a MINI within an inch of its life is fast disappearing.

It is understandable that MINI wants to increase the volume of their sales by targeting newer segments, some of whom may not find the small size of the car practical. However, for fans like me, who still prefer the original MINI, such changes are rather heartbreaking.

Fine, the five door MINI is basically a grown up version of the 60s classic. So how do they explain the new MINI Superlegerra Vision concept?

The concept is a combination of British engineering and Italian coach-building, as Touring Superleggera, a Milanese coach-building house, has collaborated with MINI on the project. Alright we admit it, the divided Union Jack style taillights do look pretty cool. Standing back however, the concept is an Italian coachbuilder’s handiwork that while beautiful, is not what one envisions under the esteemed British marque.

Nevertheless, as long as they maintain their basic design philosophy of building fun cars with small engines, they won’t go wrong. Unless some Italian coachbuilder steps in, that is… 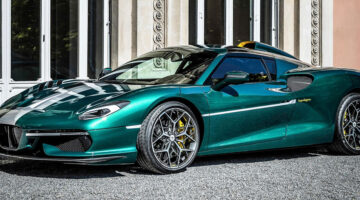