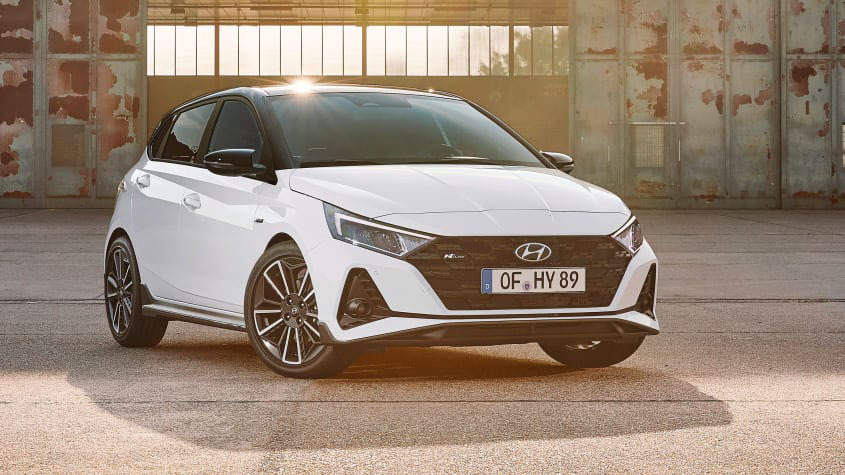 The full-fat i20 N is still under wraps, but to tide us over until it’s revealed in a few weeks Hyundai has shown off the lesser i20 N-Line variant, with interior and exterior changes inspired by the marque’s performance division. Pricing is yet to be announced.

The top of the range is 1-litre turbocharged three-cylinder, packing 118bhp and 127lb ft of torque – a six-speed manual is standard, however an optional seven-speed dual-clutch automatic is optional. The i20’s key rival, the Ford Fiesta ST-Line, is available in both 94bhp and 123bhp forms, but the latter only when specified up to $28,130 ST-Line X trim.

As with other N-Line models, the i20 features a bespoke front bumper, revised grille pattern that references a chequered flag and N-Line badging. A new set of two-tone 17-inch wheels is also part of the package. Move to the rear and you’ll spot a refreshed bumper, now sharper in design and featuring a triangular fog light similar to the brake light on the i30 N hatch. The rear bumper is finished off with chrome exhaust outlets and clear brake light lenses.

While commenting on the design of a supermini like the i20 N-Line might sound a little mundane, Hyundai often shares the exterior design elements seen on full-fat N models with these lesser N-Line cars, which in this case gives us our best look yet at the new i20 N we’ll see in a couple of weeks.

The cabin has also been given an N-inspired overhaul, with more supportive N-branded sports seats, performance-oriented steering wheel, metal pedals and a leather N-branded shift knob included in the upgrade.