Times are changing at GMC. Time for its entry level model to make its Management Fleet debut

It would be easy to cast our new long term Terrain aside with a derisory ‘pfft’. Like Buick, GMC often stands as General Motors’ forgotten middle child between the newly rejuvenated Cadillac and high profile Chevrolet, but even amidst its sister models, the Terrain may struggle to garner attention. GMC’s all-new Acadia for instance impressed our man in the USA and is just three months away from its regional release. That, plus the fact that the Terrain was first introduced in 2009 to plug the gap left by the departing Pontiac Torrent, and has received only the lightest of facelifts and a Denali edition trim since then. Why then should we care about GMC’s equivalent to the Chevrolet Equinox, with which – incidentally – it shares a dated chassis?

You’d be surprised. For starters, the Terrain, as GMC’s smallest compact utility vehicle, is also the company’s second highest seller after the Sierra pick-up truck (which does rather put the more high-profile Yukon and Acadia newboy to shame). GMC also takes great pains to emphasise that 44 per cent of Terrain customers are female, a notch on General Motors’ gun holster as far as diversity goes. In 2013, a ‘bi-fuel’ Terrain – as part of a project with Nat G CNG Solutions in Texas – also became the first natural gas vehicle to receive certificated approval by the USA’s EPA, and bested even the Toyota Prius – the poster child of fuel efficiency – in average figures.

Despite being several years past its sell-by-date, the Terrain nevertheless remains a company lynchpin. Doubly significant given rejuvenated opposition from the new Hyundai Tucson and Ford Edge. Allowing one of its highest selling models to dip beneath the water will just not do. 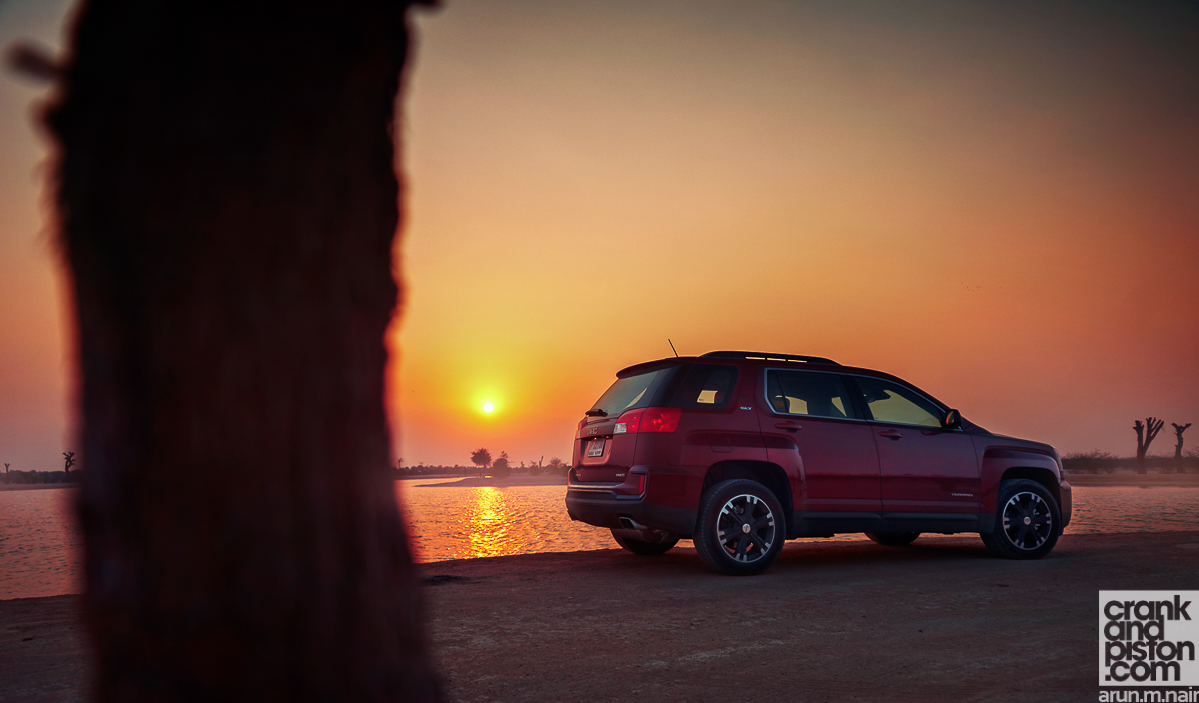 Clearly GMC thinks the same thing, and while a new second generation model is still a year or two away, the company hopes its new Nightfall Edition will ‘attract new and style-conscious customers to GMC’. A three month long term test should give us some answers.

Mechanically, the Terrain remains unchanged after its 2016 refresh, bolstering a 297bhp 3.6-litre V6 that produces 272lb ft of torque. Heaving a 1900kg kerb weight means the 0-100kph is unlikely to rustle any toupee fringes, though the wide torque band and all-wheel drive setup could prove crucial on the dunes. And who knows? That 1588kg trailering capacity could come in handy, as could a handful of driver assistance systems.

It’s the styling though that GMC Arabia hopes will net the Nightfall Edition some much-needed fandom. Revised head and tail lamp designs and 19in wheels remain from the 2016 refresh, on top of which lies gloss black front and rear fascias, luggage rails, window surrounds, and a charcoal grille. See if you can spot the same colour theme running through the inside too, alongside a new 7in IntelliLink infotainment system.

You can check out more of Management Fleet updates HERE, and more GMC stories HERE