A testament to Ford’s engineering excellence 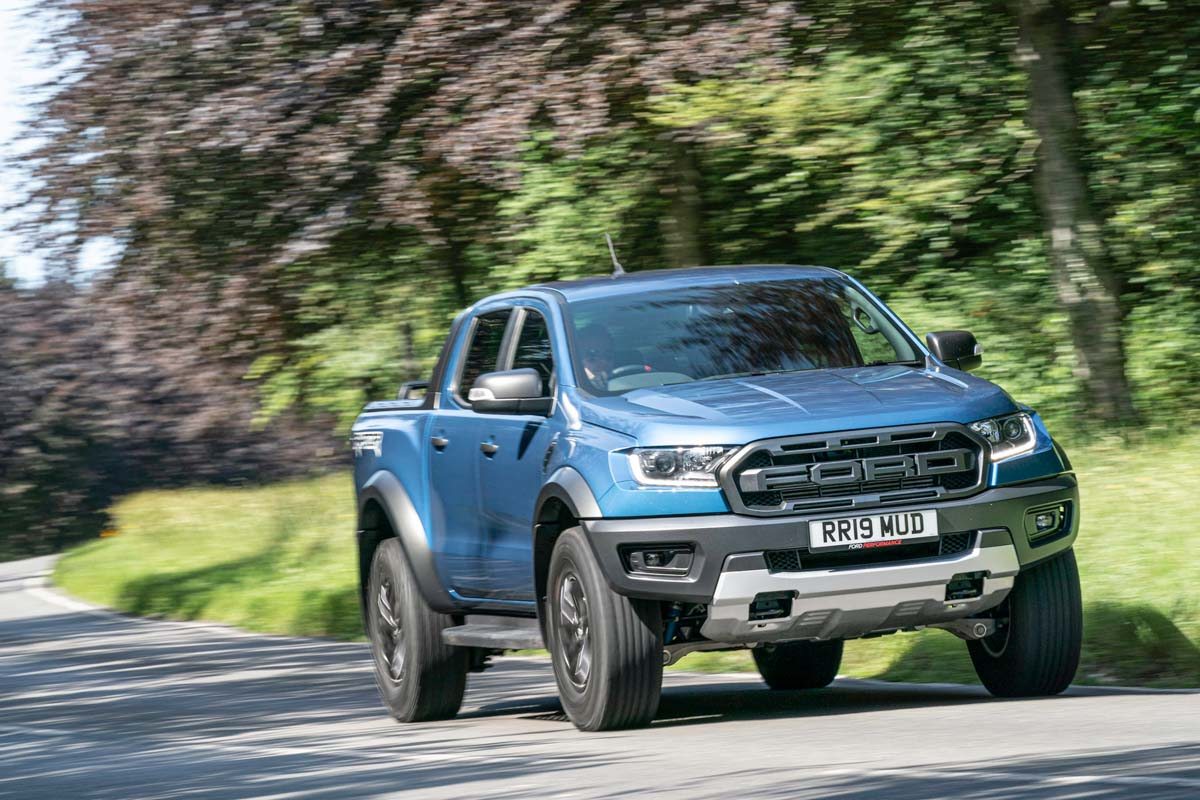 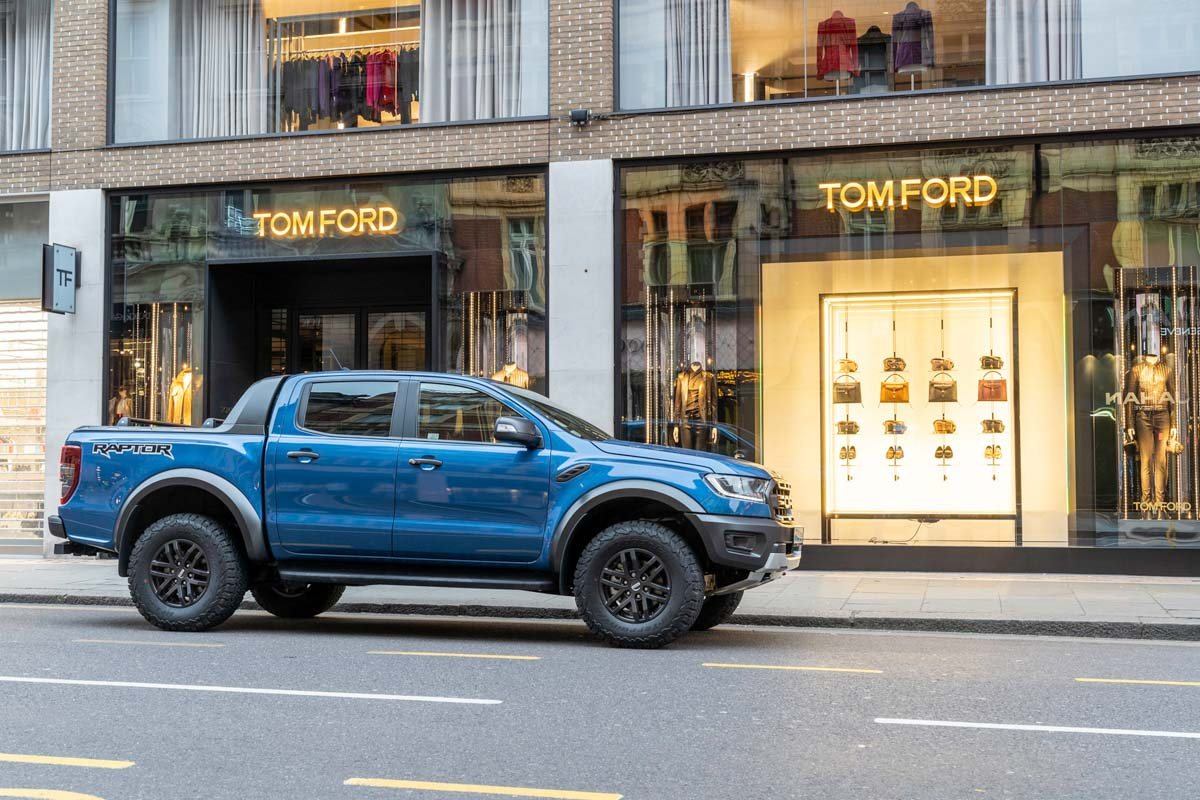 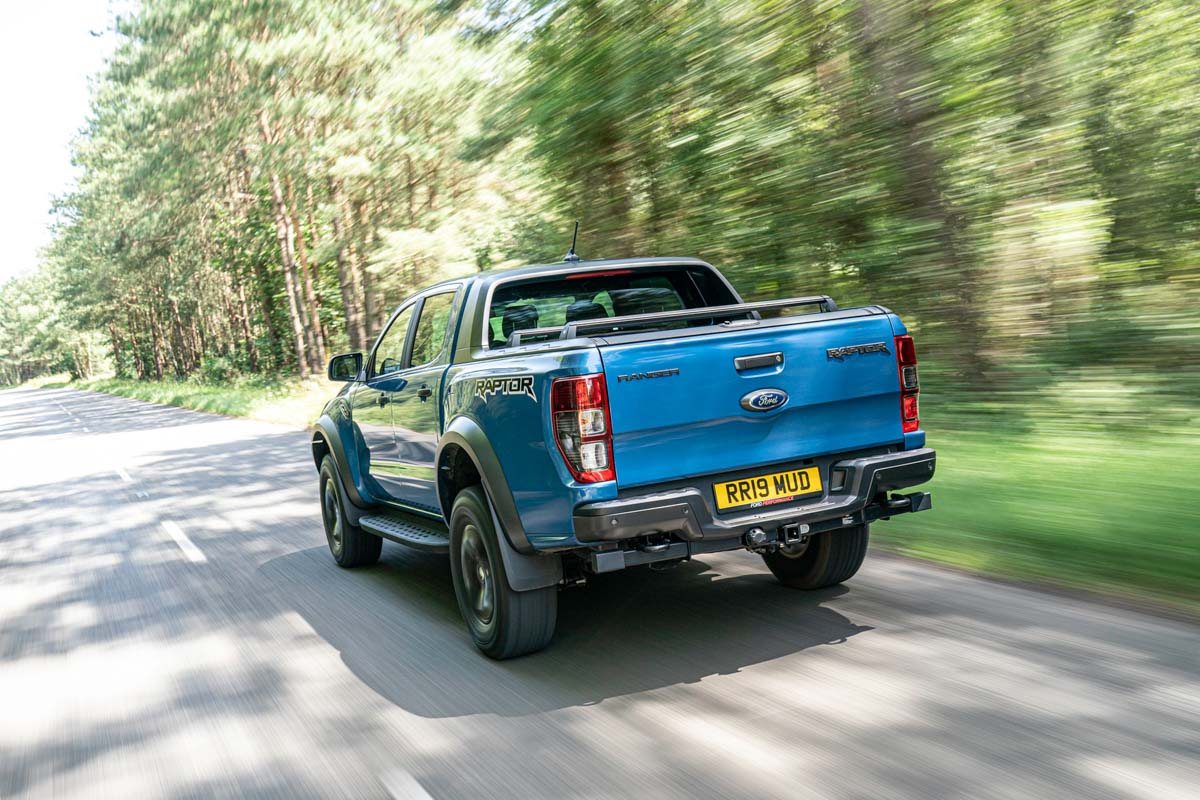 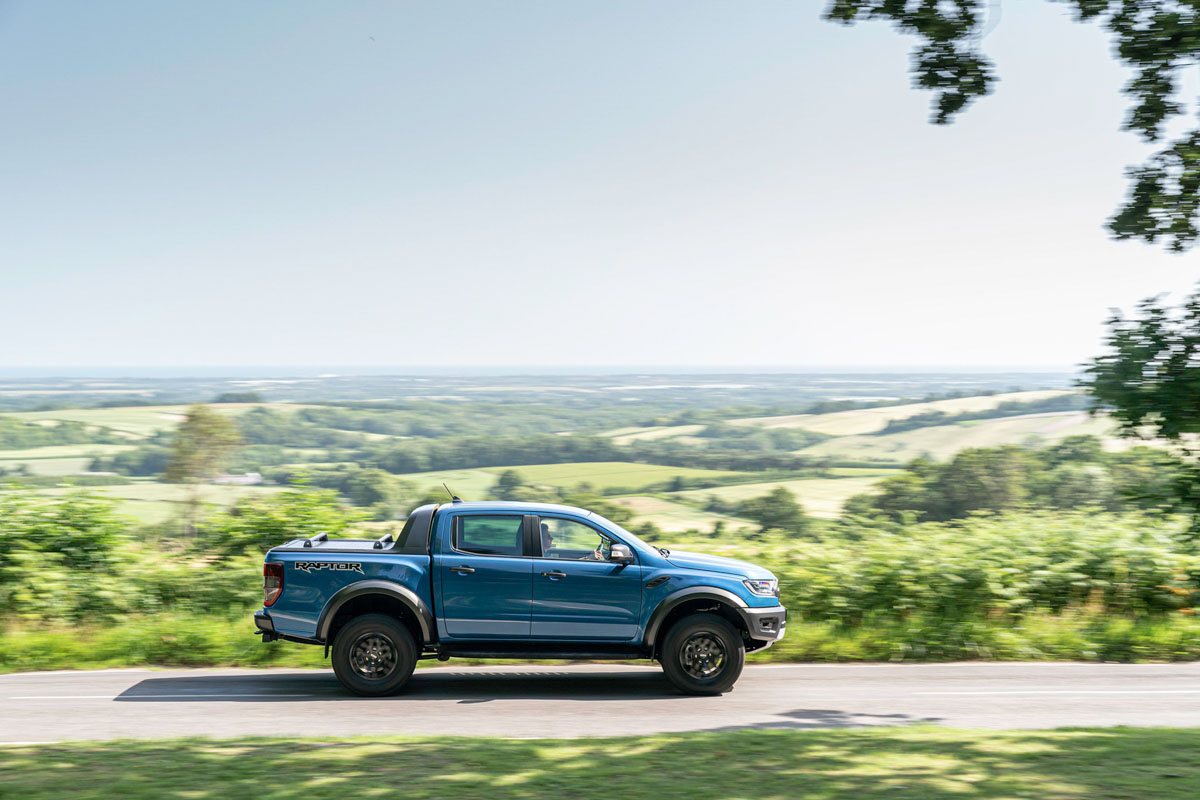 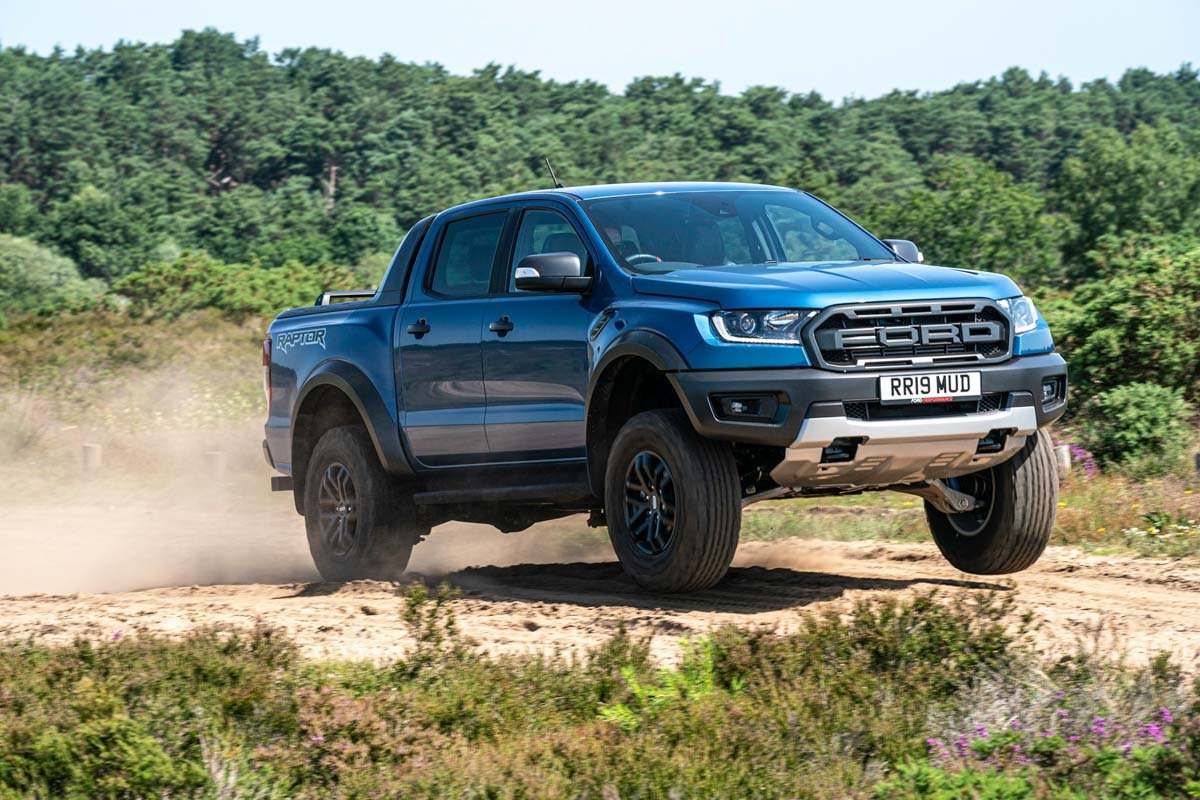 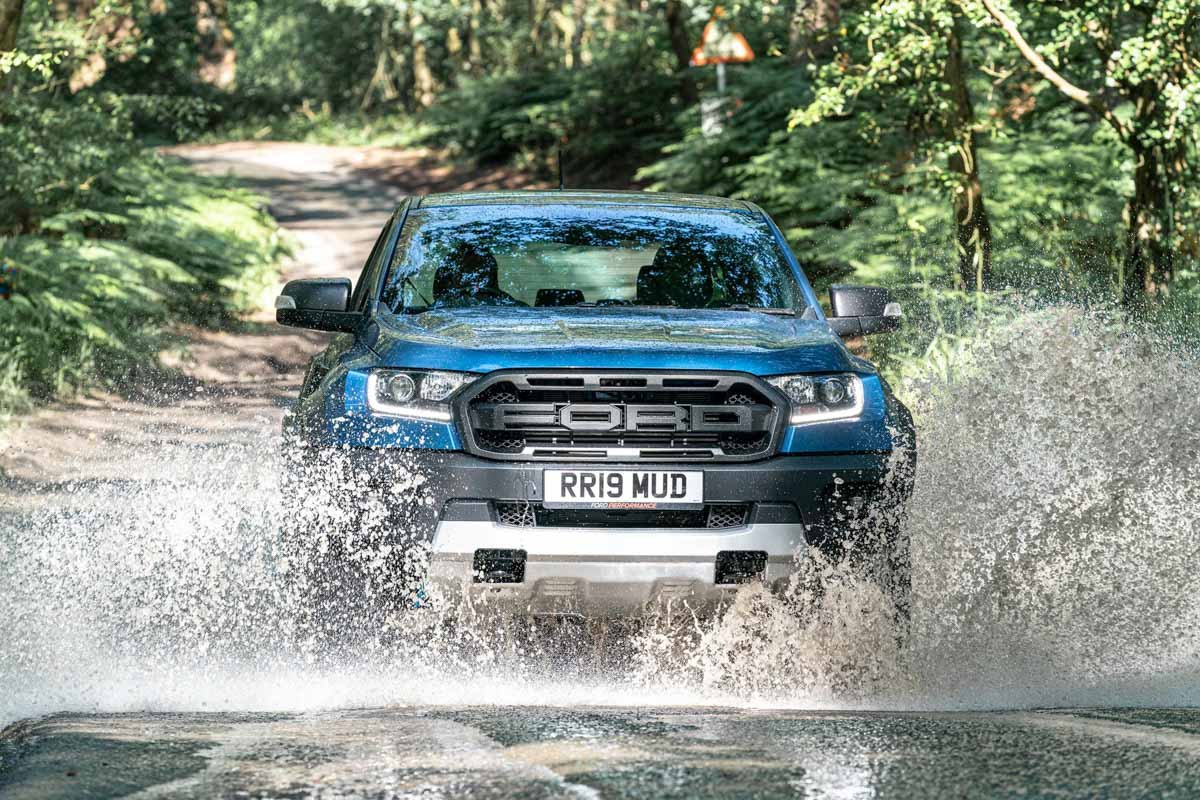 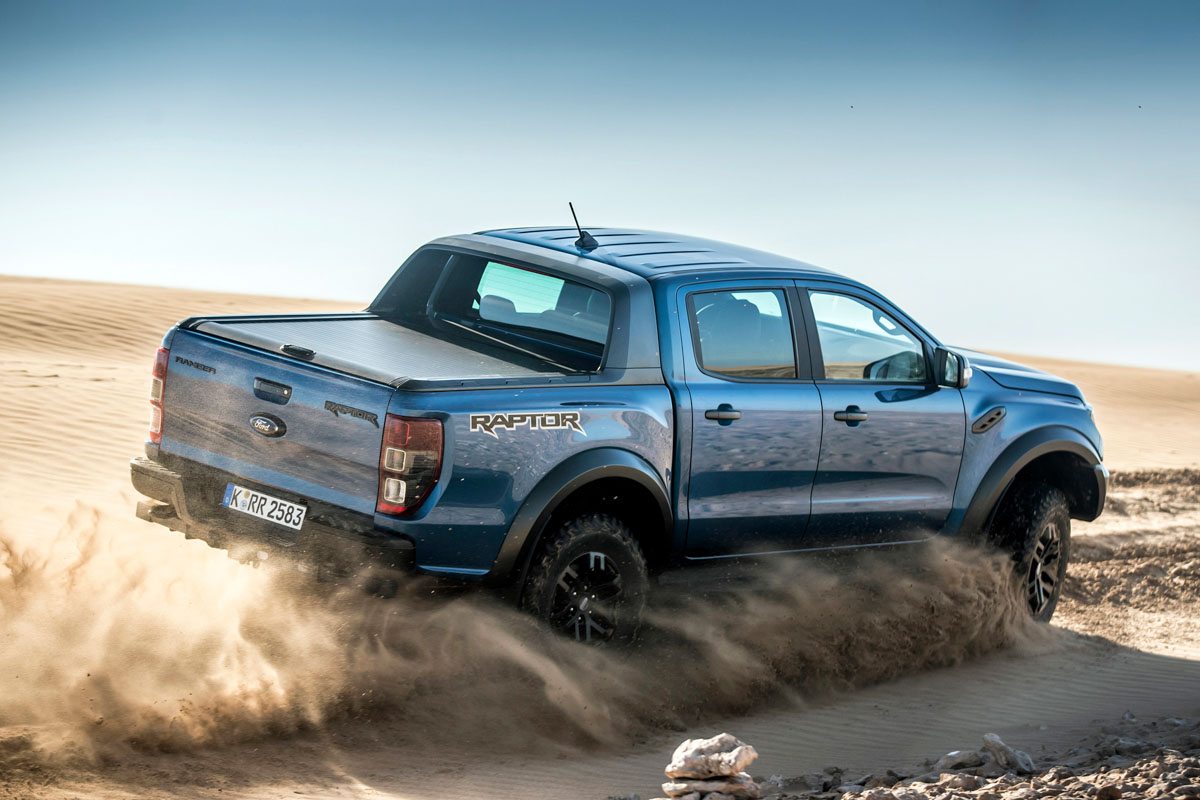 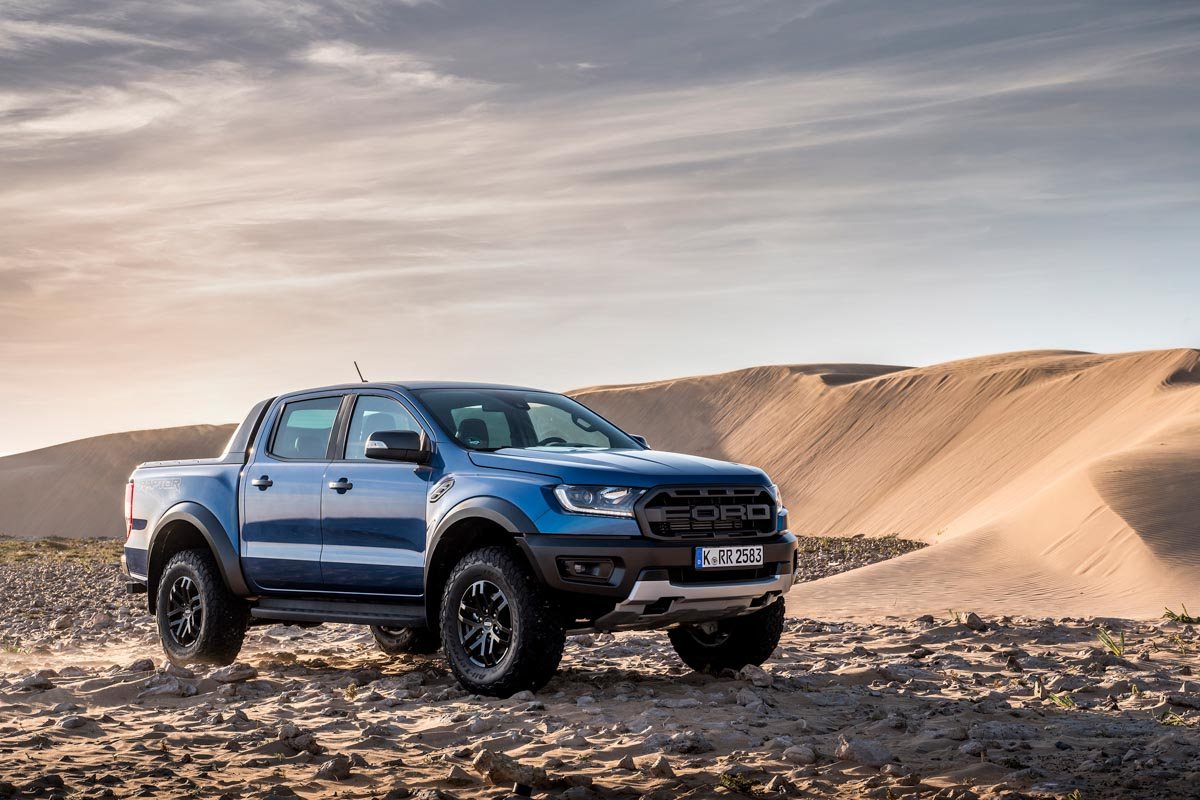 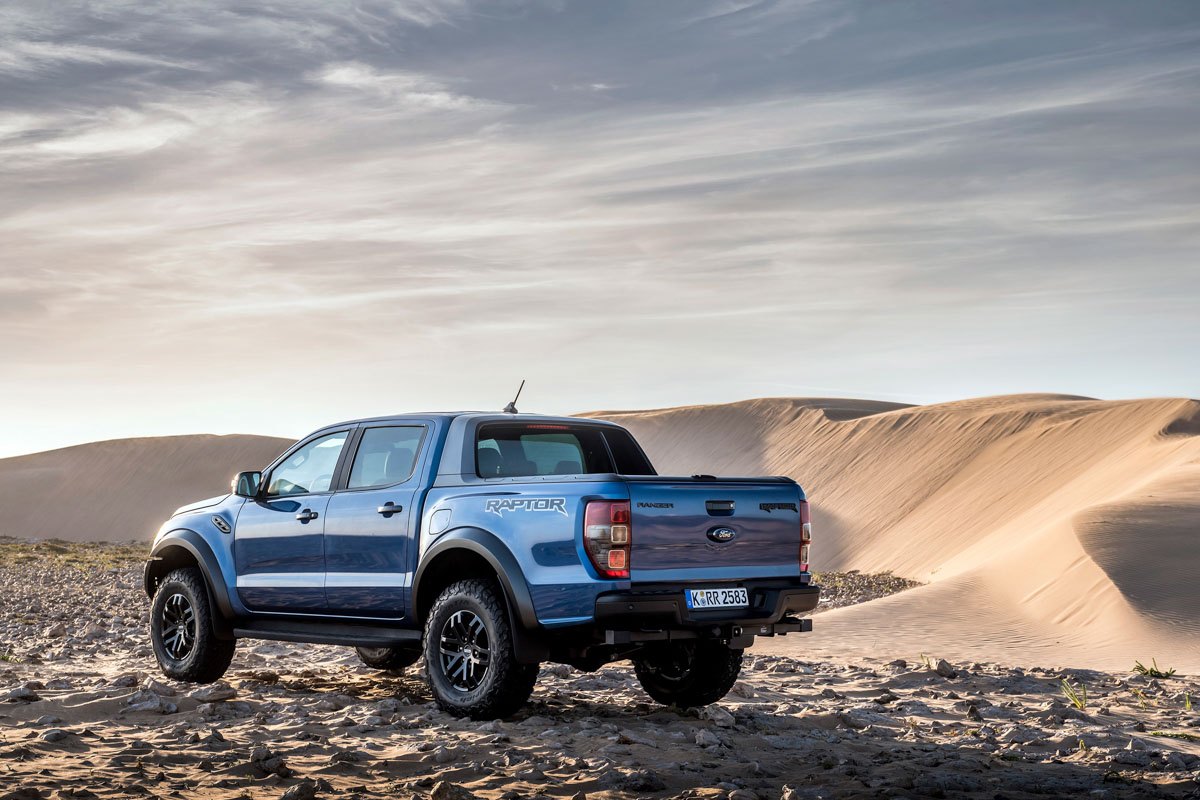 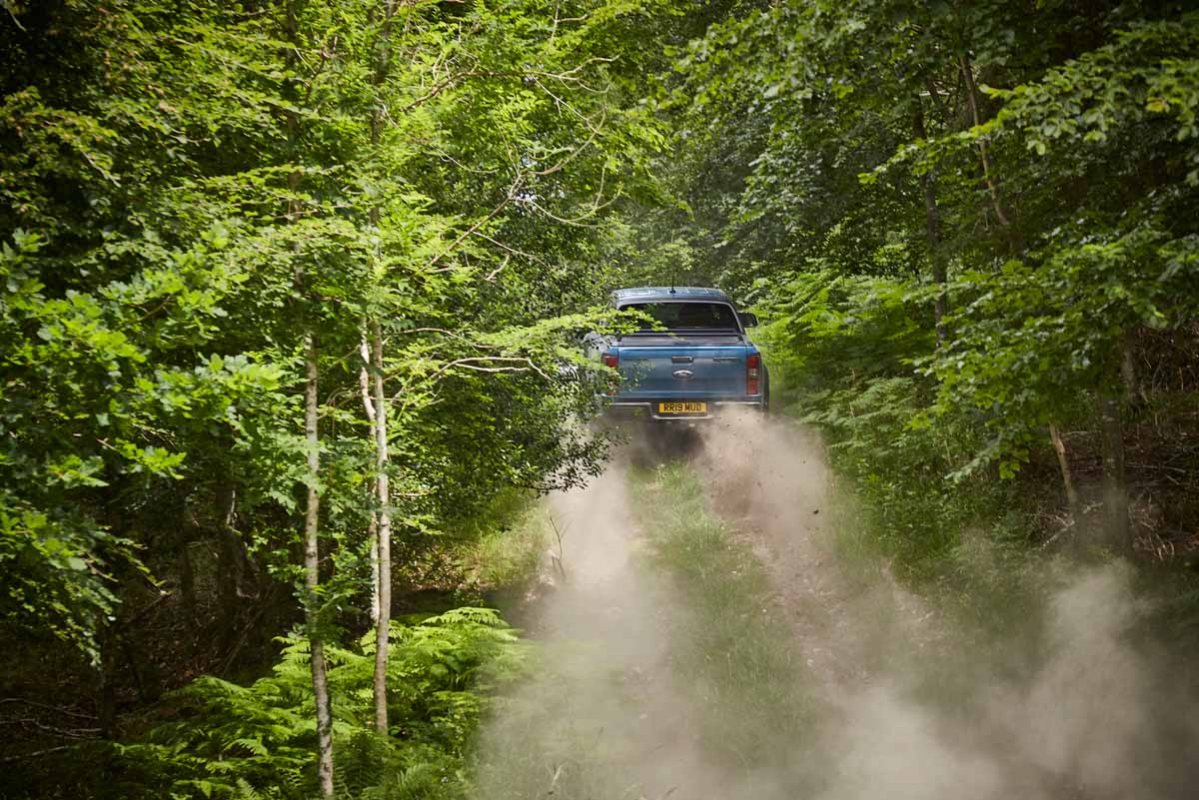 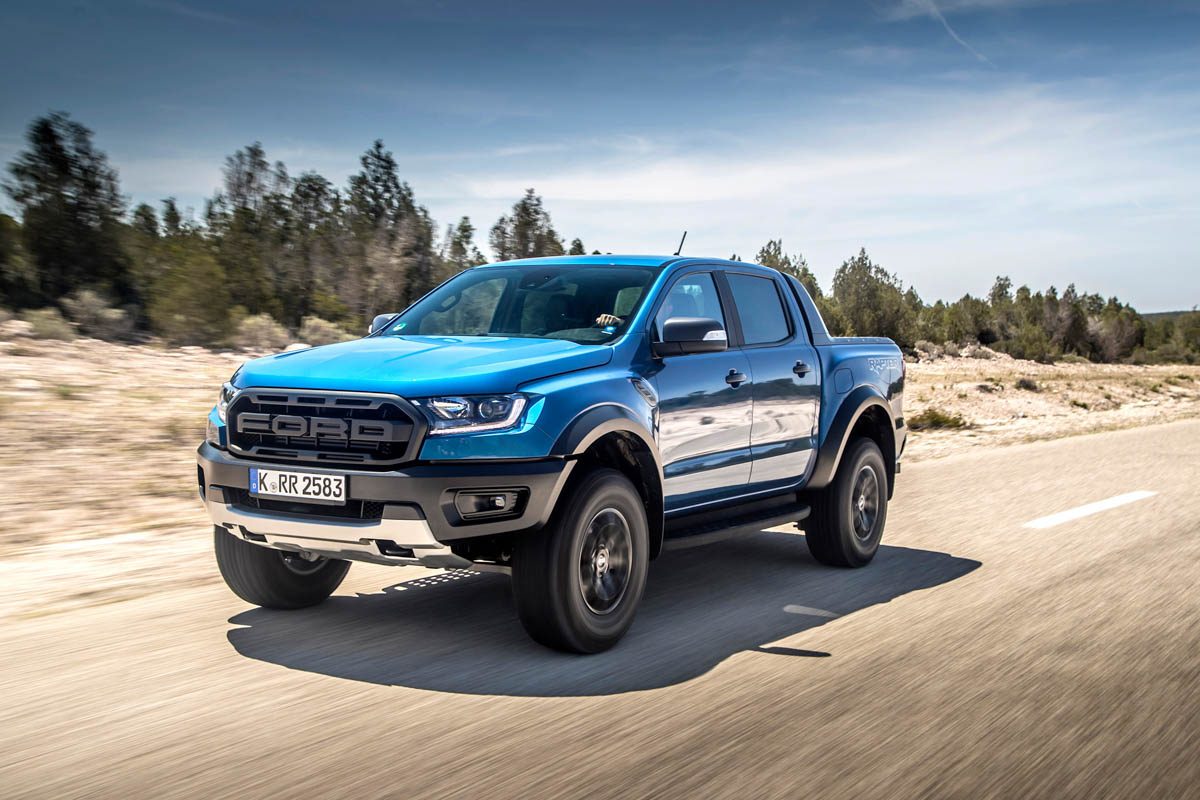 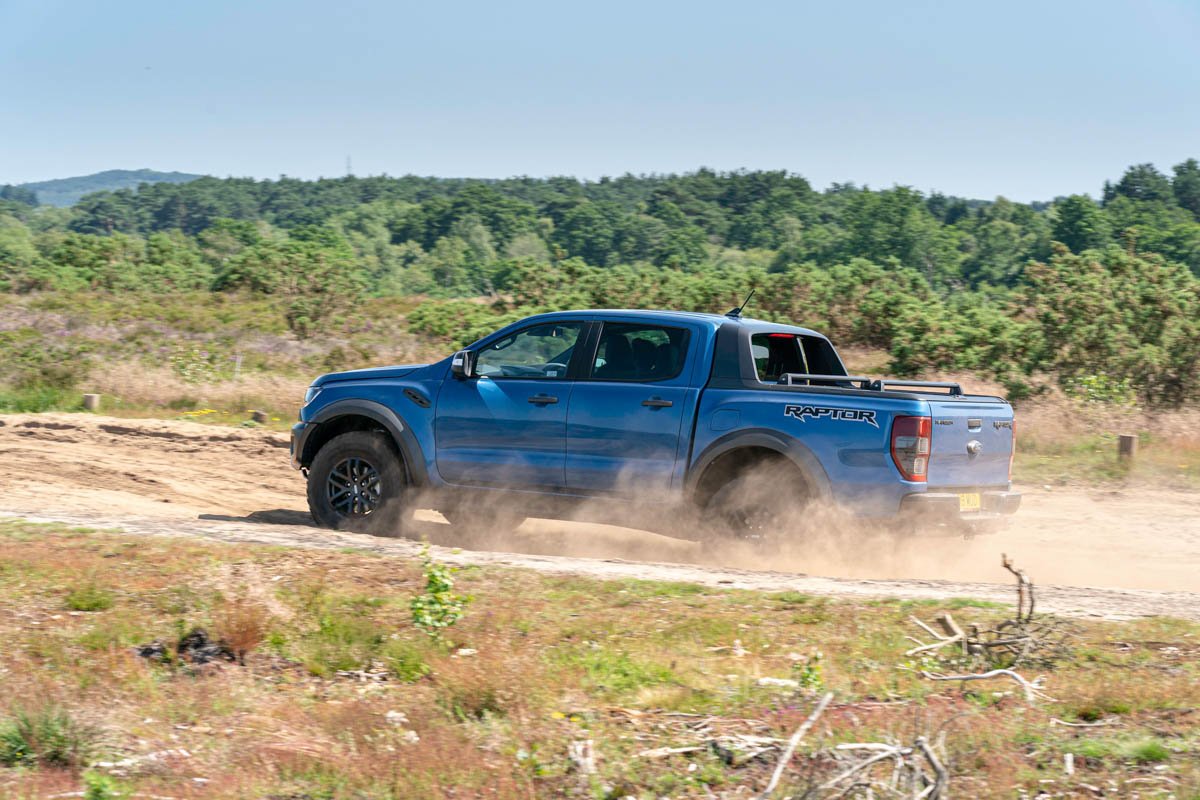 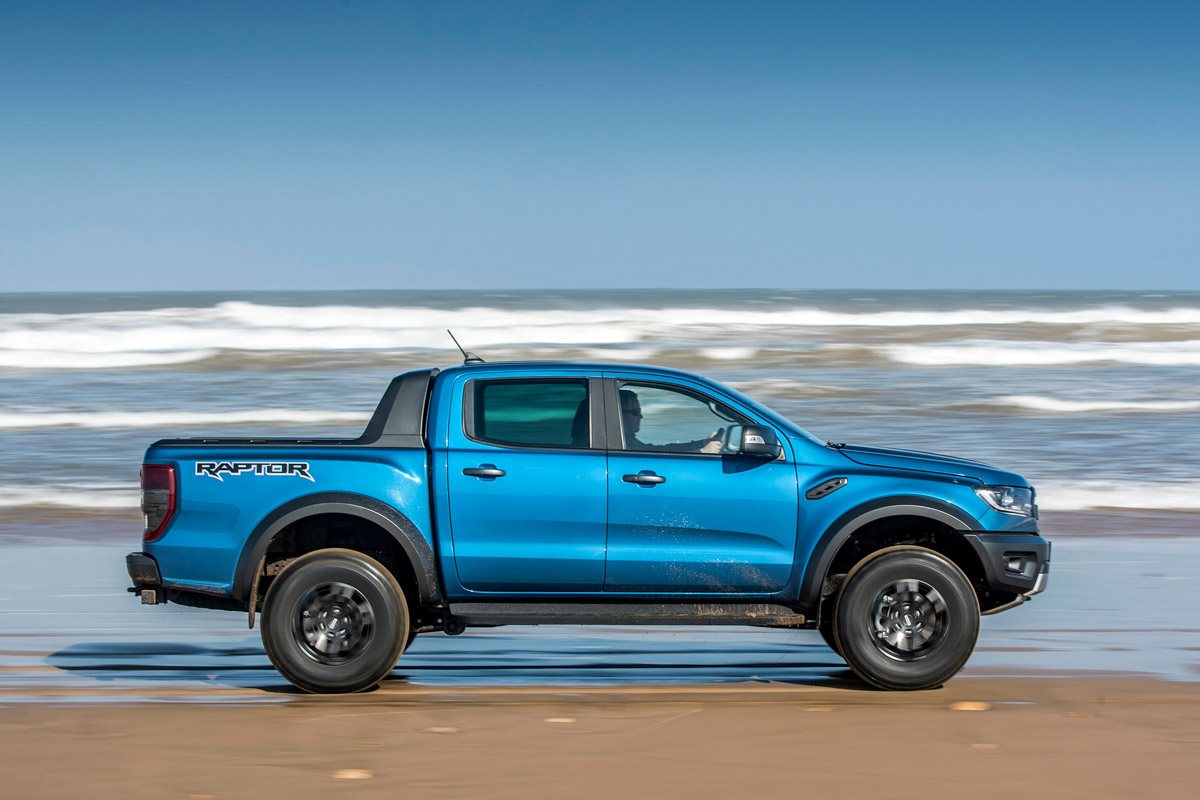 The Ford Ranger Raptor has gathered interest like no other pickup truck in the region. Call it cultural appropriation perhaps, but the pickup is now no longer just a broad Americanism, but a trend of commercial vehicles appealing to private buyers quickly spreading.

As such, it’s not entirely surprising to see Ford learning from its Raptor success in the US and applying it to the smaller Ranger, a model more in proportion to local roads. This isn’t a half-baked job either, as the Raptor represents a near ground-up re-engineering exercise – completed in Australia, no less – with an engineering team who know a thing or two about toughness and resilience.

But is toughness and resilience really that important when roughing it out in the rolling hills of Sussex or, God forbid, central London? Perhaps not, but those new elements have had a knock-on effect, accidentally making the new Ranger Raptor the most proficient pickup on road, not to mention off it.

This kind of ability doesn’t come cheap. Including VAT – which you’ll have to pay since the Raptor’s 620kg payload excludes it from the same benefits as a regular commercial vehicle – the Ranger Raptor comes in at $61,309, or more than $19,000 above the current Ranger Wildtrak range-topper.

In fairness to Ford, that $15k is getting you an awful lot – visual changes, significant suspension and braking improvements, some interior niceties – but it’s still a large amount of money for a four-cylinder diesel hauler.

All Ranger Raptors are double-cab only and the model is available in five colours including the Ford Performance Blue pictured, and Conquer Grey among the bespoke options. Standard kit is comprehensive, with an 8-inch touchscreen with Sync 3, a rear-view camera, keyless start, heated windscreen, climate control, and eight-way adjustable leather and Alcantara sports seats.

Highly customised pickups seem to have taken off recently – Isuzu has been selling an Arctic Trucks AT35 D-Max with wide arches and large tyres for some time, and recently announced the dramatic-looking (and surely Raptor-inspired) XTR. Toyota also offers an AT35 variant of its Hilux by Arctic Trucks. Both AT35s are the best part of $63k themselves, while the XTR is nearer $52k, all including VAT.

In terms of more conventional trucks, the VW Amarok V6 is probably top of the pile, variants of which begin at around $46,500. It’s more of a sprinter than the Raptor (the quickest versions get to 100kph in eight seconds) but unlikely to match its off-road performance, or fun, without a few choice modifications.

The Ranger Raptor might look similar to the twin-turbo V6-engined F-150 Raptor that has been a sensation in the United States over the last few years, but unfortunately the Ranger’s powertrain is a little less generous.

Standard on all Ranger Raptors is the same 2-litre biturbo four-cylinder diesel engine as is found elsewhere in the Ranger range. Its on-paper performance figures fail to impress, with a 0-100kph time of 10.5sec meaning the Raptor is no sprinter (for reference, America’s F-150 Raptor can reach 100kph in little more than half the time), while the 170kph top speed would be more impressive on loose surfaces than on the autobahn.

The powertrain itself is not inherently bad, but the weighty 2510kg kerb weight blunts any urge you might expect given the Raptor’s styling and reputation.

The decision to fit a fairly bog-standard four-cylinder diesel engine may seem like a shame, but there are actually a multitude of practical reasons for that decision. To start with, the previous 3.2-litre five-cylinder diesel that is still available in some Ranger models might be the more obvious choice for the Raptor, as its torque is available lower down in the rev range, making it feel more effortless at speed. However, that engine is nearing its demise due to incoming emissions regulations, so it made little sense to spend the money homologating it for a new model such as the Raptor.

When the Ranger Raptor reaches the US next year, it’ll feature a completely different petrol powertrain, likely a turbocharged V6 petrol that will also be homologated for the RHD Australian market, but it’s uncertain to pass Europe’s more stringent emissions regulations. With such a small projected market share, the business case to make that powertrain regional friendly is a tough one.

The transmission is the same ten-speed automatic ’box as found in the Mustang, but is thankfully far better suited to the Ranger’s narrow powerband. It’s even quite responsive, and can be manually controlled via two bespoke paddleshifters mounted to the steering wheel.

Ford has gone to surprising lengths with the Raptor’s underpinnings, with some comprehensive changes from the standard Ranger. That starts with the ladder chassis, which in addition to reinforcement in key areas, has had its rear leaf springs replaced with coil springs.

Heavy-duty, internal bypass dampers by Fox – boasting 30 per cent extra travel over the standard Ranger items – are then fitted at all four corners, and the rear axle additionally benefits from a pair of disc brakes rather than the standard drums. The track is wider than standard (complemented visually with extended arches, as well as an F-150 Raptor-style grille) and new 17-inch wheels wear a set of 33-inch BF Goodrich tyres.

Electronically the Raptor features similar terrain modes to those of the standard Ranger, but adds a new Baja mode which knocks off the stability control and reconfigures the traction control for ‘high-speed off-road performance’. It’s possible to turn off the traction control completely, though it’ll switch itself back on again if you select another driving mode or change between four-wheel-drive modes.

One of the problems with high-performance road cars is the infrequency with which you can enjoy their potential, legally, on the road. While the Raptor doesn’t suffer from excess performance – quite the opposite – it’s still a real shame how little you’ll be able to explore its capabilities in the region.

You’ll have little hints as to its ability here and there, just as you would with a supercar. Potholes, for example, are no longer something to be dodged, and kerbside parking worries dissipate entirely. While we’d not condone such behaviour, there’s little point in backing off for speed bumps either.

There’ll certainly be no mistaking its other behaviour for anything other than that of an old-school body-on-frame pickup. There’s simply not the steering precision, body control or levels of grip you’d find in even fairly modest conventional SUVs. That may bother some. Others probably won’t care – it doesn’t seem to have harmed pickup sales so far.

The tradeoff is how the Raptor behaves in its intended, off-piste environment. The new suspension steamrollers over the kind of bumps that would have you headbutting the headlining in most SUVs. This in turn encourages the kind of cross-country pace you’d ordinarily avoid for fear of sending top-mounts through the bonnet. You’ll be jostled around of course, but the Raptor positively encourages you to attack the world in front of you quicker and quicker, and it only seems to get better when you oblige.

Even the steering makes more sense off road. It’s all about reasonable compromise: if it was honed for asphalt you’d have your thumbs wrenched off on the first misjudged boulder. On sand, gravel and over rocks the feedback seems amplified and the rate of response is more than suitable, though when arsing around for the camera quite a lot of wheel-twirling was needed to keep those enormous Ford letters pointing the right way. The brakes, a little too soft in road driving, feel progressive and powerful on loose surfaces.

Unfortunately, the engine feels a little undernourished wherever you are. The ten-speed transmission is swift and smooth enough and keeps the engine stirring along in the meat of the torque (enough so that using the paddles for manual operation tends to be unnecessary), but with 2.5 tons to hustle along the engine always feels just a little strained, using a few more revs than you’d expect and, off road, more commotion still. We’re aware high-speed off-road driving requires its own, unique driving style and that high revs are a part of that, but we’ve a sneaking suspicion that a V6-engined VW Amarok would make lighter work of some sections on equivalent tyres, simply due to its extra capacity.

However, it’s hard to imagine any other pickup sold in the region making such light work of so many off-road environments, and on the off-chance you do have somewhere appropriate to enjoy what the Raptor offers, we can’t think of another vehicle more suitable or more fun – unless, of course, you were to import Ford’s own F-150 Raptor for yourself.

It may be a diesel, but the Ranger’s forte is not low fuel consumption – blame this on the Ranger’s kerb weight, cliff-like aero and knobby off-road tyres. On a brief motorway run, we saw MPG hovering in the mid-high 20s, with consumption only getting higher as speeds reduce, but then it’s not a particularly high priority for a car like this.

Otherwise, those tyres will be expensive to replace, but being proper off-road units they will at least last a long time.

The Ranger Raptor’s interior is largely unchanged from that of the standard car, which is no bad thing. It’s rugged, easy to use and spacious, but does pick up a few worthwhile bespoke touches such as the new steering wheel, gear selector and new seats.

A highlight is the aluminium gearshift paddles mounted behind the steering wheel, feeling both substantial and high quality, and not too dissimilar to those found on a Ford GT in fact. The seats are supportive and comfortable, and covered in a hard-wearing fabric befitting the Ranger’s rugged image. The most interesting aspect of the interior though is its towering driving position. Most pickups sit quite tall, but the Raptor’s extra ride height and 33-inch off-road tyres take that even further, allowing you to lord over even the highest-sitting Range Rover drivers. It’s not fancy, but it works, and features just enough Raptor-specific trinkets to warrant the price tag.

We’ve been talking Fox dampers, bespoke wishbones, 33-inch off-road tyres and sand dune-bashing Baja driver modes, but it’s likely the Raptor’s design is what will draw in most clientele.

Like the chassis development, the Ranger’s design was penned in Ford’s Australian studios, where designers were given the task of not only redesigning the front and rear fascias, but also bespoke wings front and rear to cover the new axles, as well as additional styling elements such as the ‘Sports Wing’ on the rear tray and new headlights.

As a result, the Raptor looks tough, and not in that slightly underwhelming fashion you’ll see on a hyped-up dealer-built special, but with serious substance underneath the skin. If only it had the powertrain to live up to its image. 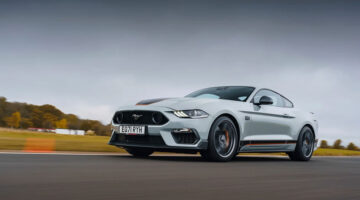