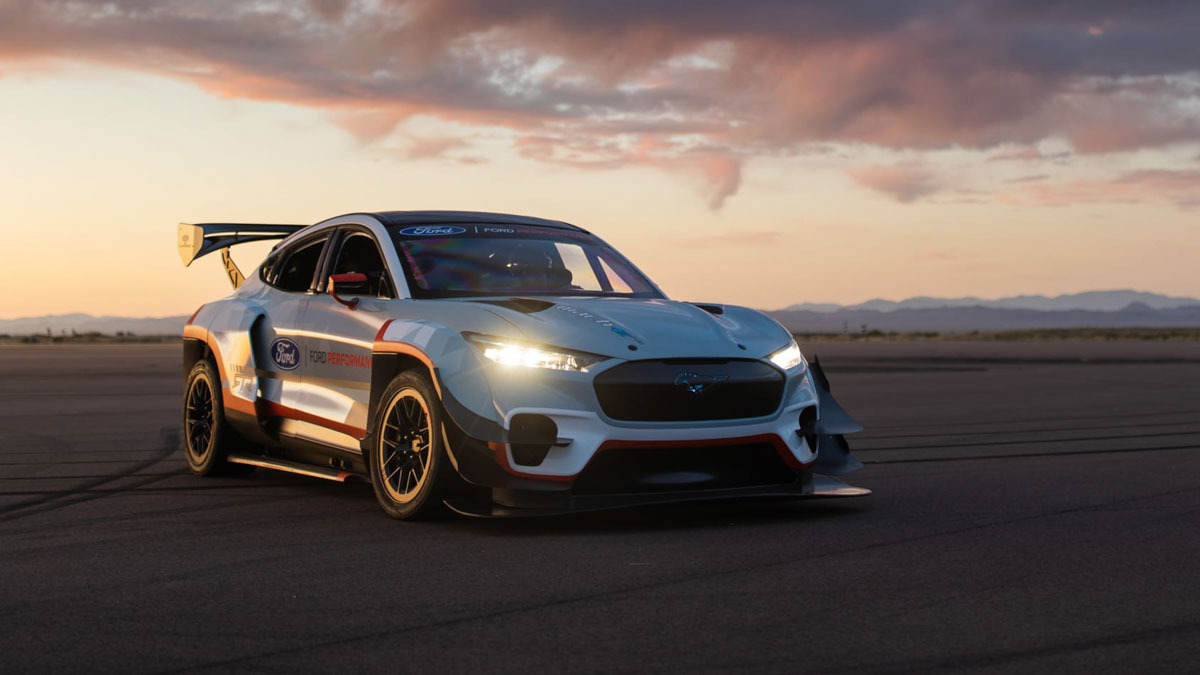 Ford’s all-electric Mustang Mach-E caused a stir when it was launched late last year, with its divisive styling and curious use of the Mustang nameplate. Following in the footsteps of the drag-spec Cobra Jet 1400, the blue oval has now revealed the one-off Mach-E 1400, an all-electric machine designed for a number of applications.

Developed in partnership with RTR Vehicles, a company founded by professional drifter Vaughn Gittin Jr, it’s certainly capable of burning rubber; thanks to its adjustable platform, however, it can also be set up for the drag strip, racing and more, aiming to demonstrate the capabilities of all-electric vehicles.

Under the time-attack-esque bodywork are a total of seven electric motors – three at the front and four at the rear. A single driveshaft connects them to the differentials, with some clever engineering allowing power to be sent to all four wheels, or to only the front and rear individually. These differentials can be adjusted to suit the task at hand, with varying ratios used for applications such as track driving and drifting.

The seven motors produce a combined total of 1400bhp thanks to the use of a unique 56.8kWh nickel manganese cobalt pouch cell battery – this is used for its ability to discharge at a faster rate than ordinary units. To reduce downtime between runs, it’s also designed to be cooled during charging, allowing it to accept charge more quickly.

Not only does the powertrain boast some impressive numbers, the new carbonfibre bodywork has also been designed to create the same downforce as the extreme McLaren Senna GTR: 1000kg at 257kph, to be precise. A large dual-layer rear wing, front canards that wouldn’t look out of place at Pikes Peak, a front splitter, large rear diffuser and more, all contribute. Wide arches also allow for an increase in track width for improved performance.

The aerodynamics can be adapted to suit any scenario, however, with less aero and an increased focus on cooling used for drifting. Entirely different front-end configurators can also be swapped in, with control arms and steering componentry used to cater for the extreme angles required in drifting. Its Brembo brakes are also fitted with an electronic booster to allow for regenerative braking, with the hydraulic handbrake tied in with the powertrain to cut power when initiating a slide.

The Ford Mustang Mach-E 1400 will make its debut at an upcoming NASCAR race, and although you won’t be able to get your hands on this one-off prototype, first Mach-E examples will hit European roads in early 2021.

> The Ford Mustang Cobra Jet 1400 is an all-electric dragster

Previous ArticlePogea Racing’s 666s is a cut-price McLaren 600LT
Next Article Honda e 2020 review – does the funk override the flaws?