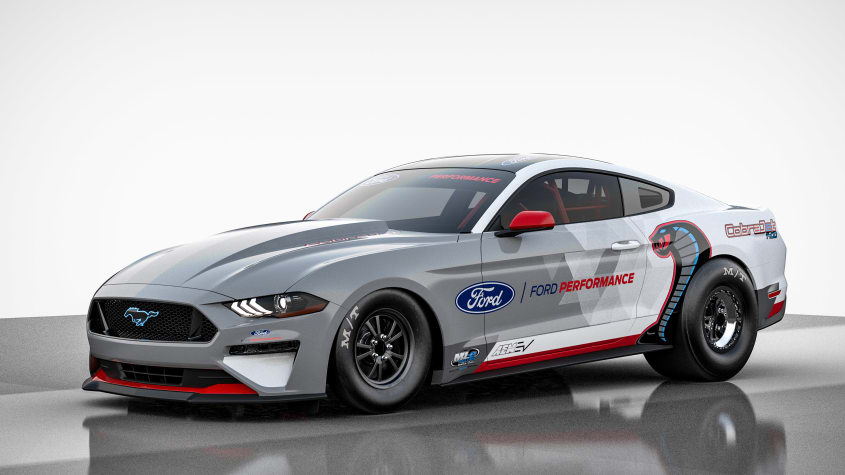 The Ford Mustang is no stranger to drag racing, with even the earliest iterations having been modified to within an inch of their existence in the pursuit of quarter-mile bragging rights. Bringing the blue oval’s line of factory drag racers into 2020 is the Cobra Jet 1400, a prototype racer that bears not a single cylinder under the bonnet.

The last factory dragster from Ford was the $130,000 Cobra Jet of 2018, a track-only machine limited to just 68 units, capable of a mid-eight-second, 241kph quarter-mile run thanks to its 5.2-litre supercharged V8. Though not available for purchase, the new Cobra Jet 1400 takes somewhat of a different approach.

With help from a number of experts in the field, Ford Performance devised an all-electric powertrain to help the Mustang reach an output of over 1400bhp and 1100lb ft of instant torque – for reference, that’s around twice the torque of the already-rapid McLaren 720S.

Performance is predictably impressive, with it projected to cover the quarter-mile sprint in the low-eight-second range at over 273kph, proving just how fast the all-electric variant is set to be…

With drag racing a department of motorsport we’re rarely exposed to in the UK, here are figures from a few more relatable machines to offer some comparison. What many consider to be the fastest supercar on sale today, the 720S, covers the quarter-mile in 9.7sec at 236kph, with even the 1479bhp Bugatti Chiron only just dipping under ten seconds at 241kph. In summary, the Cobra Jet 1400 is brisk.

Mark Rushbrook, global director of Ford Performance Motorsports, said: ‘We saw the Cobra Jet 1400 project as an opportunity to start developing electric powertrains in a race car package that we already had a lot of experience with, so we had performance benchmarks we wanted to match and beat right now. This has been a fantastic project to work on, and we hope the first of many coming from our team at Ford Performance Motorsports.’

A debut is set for later this year, when Ford will display the new model at an undisclosed drag strip before offering demonstrations of its bonkers performance. As to whether we’ll see it reach production, time will tell.