That Sebastien Loeb Racing would attract headlines on its FIA GT Series racing debut at Nogaro, France, was inevitable. That the team would do so as quickly as it did was perhaps less expected. 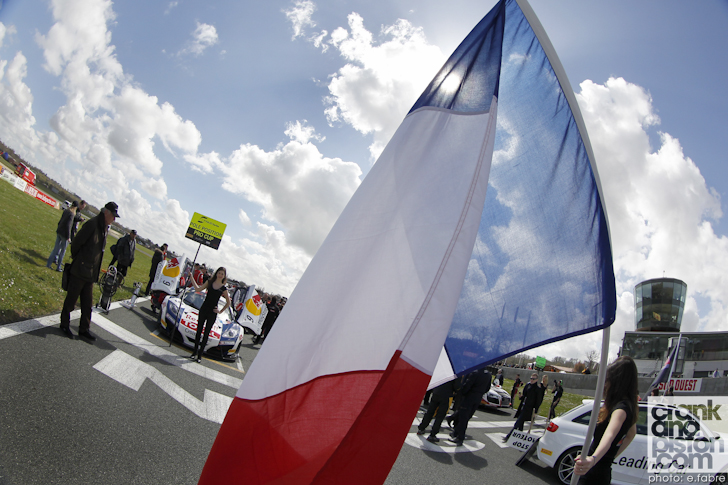 With #10 Sebastien Loeb Racing teammates Mike Parisy and Andreas Zuber having secured a front row starting position for the opening Qualifying Race – a position they would end up losing before the green flag owing to exceeded turbo boost pressure – Sebastien Loeb himself and teammate Alvaro Parente (the unexpected beneficiaries of their teammates’ demise) would go on to shock the establishment by taking victory in the McLaren 12C GT3 first time out the blocks.

A consummate showman, as his 77 World Rally Champion victories and nine consecutive WRC crowns already proves, Loeb’s first GT Series victory wasn’t about to come easily. In the hot seat for the opening stint, former GP2 winner Parente ran line-astern with poleman – and three-time Porsche Supercup Champion Rene Rast in the # 12 Belgian Audi Club WRT Audi R8 LMS, scything past backmarkers as they did but unable to find a way past as the field pitted for its mandatory pitstops. Solid running from Loeb kept his eponymous team in the hunt, the deficit up front – owing to a slightly fumbled pitstop for the Loeb Racing crew – to former-European GT3 race winner (and Rast’s teammate) Nikolaus Mayr-Melnhof down to under a second within just a few laps. The scene was set for a grandstand finish at Nogaro. 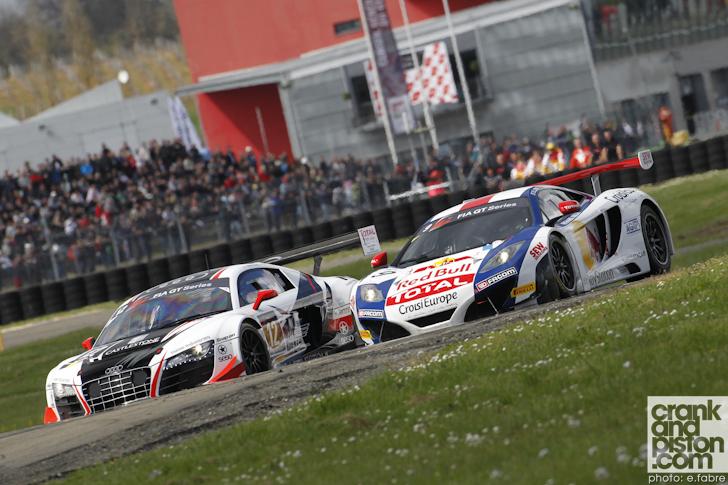 Indeed, with only eight minutes and four laps left on the clock, Loeb dived for the outside line at the hairpin, running perilously wide for grip and leaving all concerned on the pit wall watching the action through their fingers. Mayr-Melnhof, struggling on tyres that were past their best, could do nothing to counter the move, and Loeb was through. There was little to stop the team after that taking victory on home turf in France, Mayr-Melnhof and Rast coming through to take the Pro-Am class victory in second. Fellow Pro-Am runners Alon Day and Maximilian Buhk completed the top three in the #1 HTP Gravity-Charouz Mercedes-Benz SLS AMG.

With the shock eleventh hour news that Vita4One (who finished third in last year’s then GT1 World Championship) would not be in attendance at the opening round of the season, and reigning Champions All-Inkl.com Munnich Motorsport and runners-up Hexis Racing competing elsewhere in 2013, the Belgian Audi WRT brigade were red hot for race one honours. A DNF for the #13 R8 of Frank Stippler and Edward Sandstrom in the opening encounter, and #11 teammates Stephane Ortelli and Laurens Vanthoor finishing a lap down thanks to a punctured tyre, soon put paid to that. 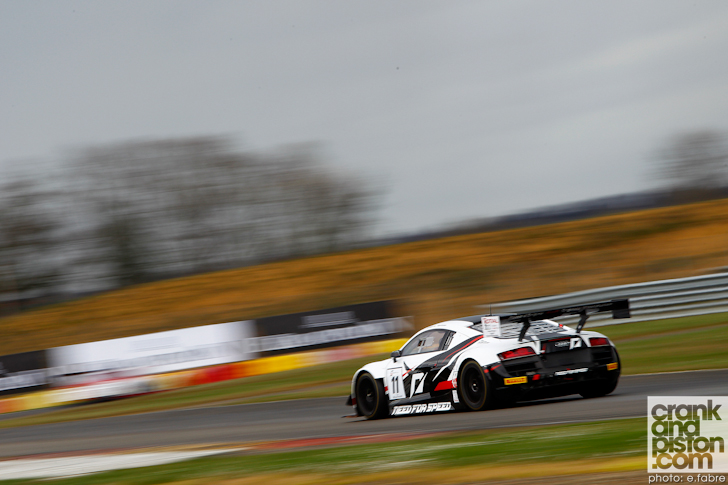 Come the Championship Race however it would prove business as usual for WRT, the team storming to a one-two, Stippler and Sandstrom just overhauling Ortelli and Vanthoor.

Of course, life on the GT scene is seldom that easy, and given both cars’ issues in race one and the resultant back of the grid starting positions, a remarkable opening stint from both Stippler soon had the lucky-for-some #13 entry at the sharp end. As in the opening encounter it would be a late race dive for position that secured victory, Sandstorm catching Gravity Charouz driver Buhk off-guard with just 12 minutes to run at turn 9. 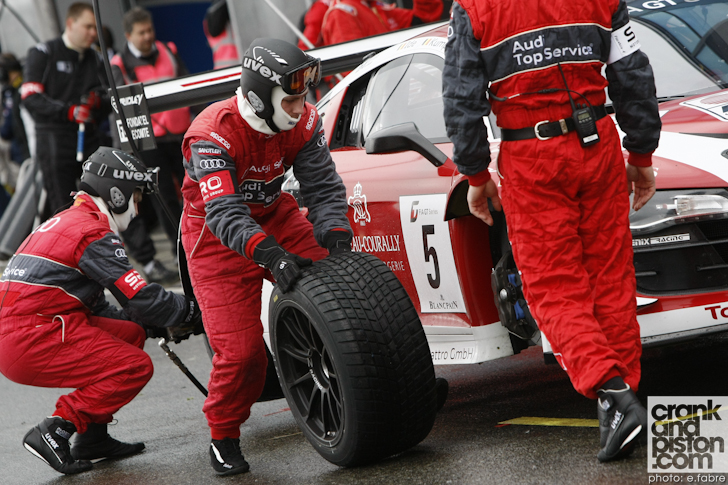 Some eight seconds further back, an equally impressive run from the #11 machine saw Belgian Vanthoor slip by both the HTP Gravity machine and Phoenix Racing’s Anthony Kumpen in the #5 Audi R8 LMS to grab second. A little under a second adrift, Buhk did at least manage to hold on to secure the #1 Merc its second third place of the weekend and Pro-Am victory.

Race one victors Sebastien Loeb Racing could manage only 12th (just behind the sister #10 entry) following a timed penalty for tapping the Rast/Mayr-Melnhof Audi into a spin early doors. Even the Audi couldn’t avoid the wrath of the stewards though, a timed penalty for accidentaly leaving their engine running during the pitstop knocking them to sixth. 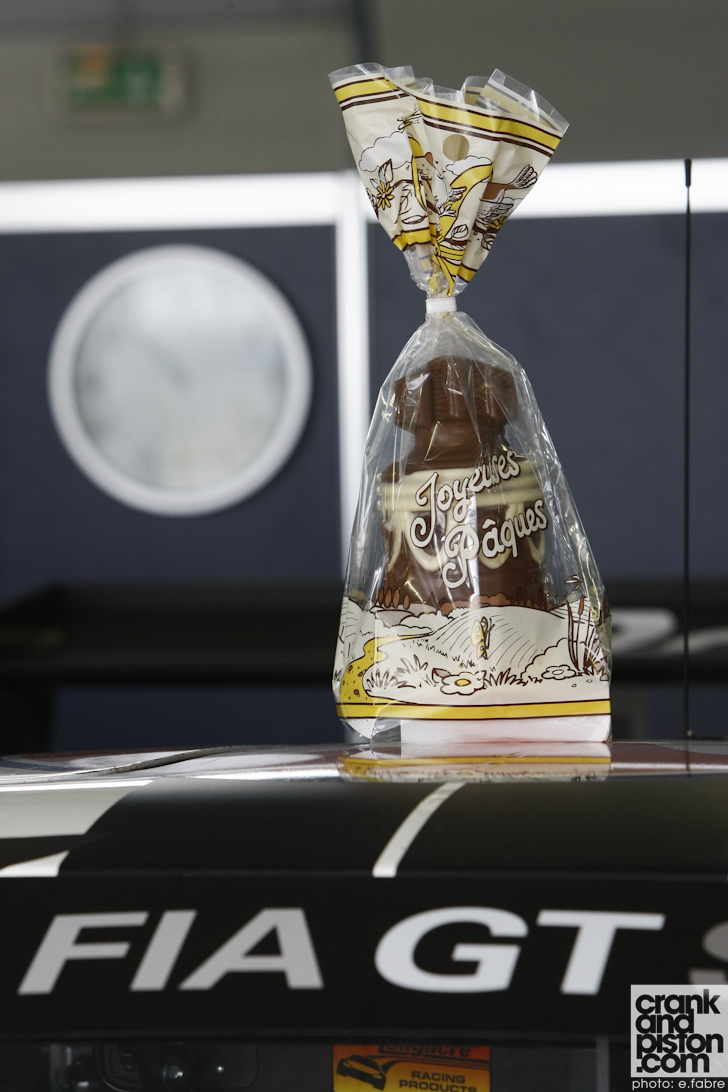