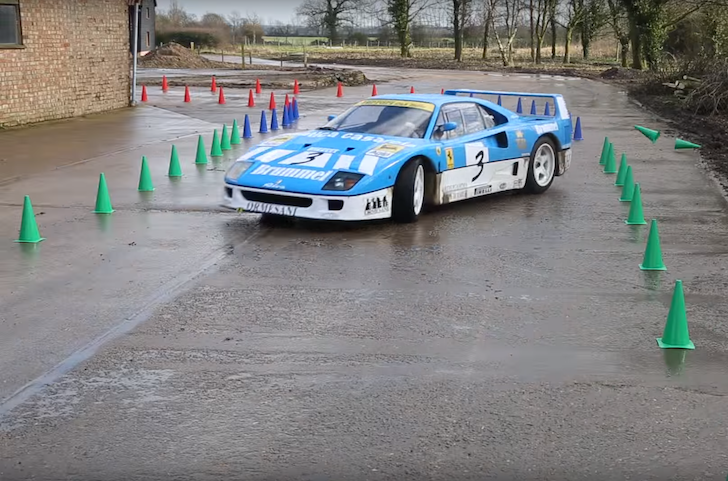 We’re wondering if this is one of the most beautifully random motoring videos we’ve ever come across, since it includes ‘Tax The Rich’ – y’know, the guys who leathered a Jaguar XJ220 and a Ferrari 288 GTO a few years ago – a gymkhana course on a farm even Ken Block would nod approvingly at, and the legendary Ferrari F40 GT.

Oh yes, Tax the Rich hasn’t just gone for any old F40 in its latest offering. Following the almost absurdly high demand for Ferrari’s greatest ever supercar by the time production whittled to an end in 1991, Maranello had one last surprise in store, and greenlit development of the special edition ‘GT’ by affiliated Padova Ferrari service centre Michelotto. From the F40’s 2.9-litre twin-turbocharged V8, the team ripped a truly staggering 590hp, then proceeded to drop the suspension, beef up the brakes, and generally tune the living bejesus out of the F40. Meeting governing body regulations, the GT even competed in the 1991 Italian GT Championship, winning three times.

Consider all that pedigree whilst watching the Italian modded stallion being pursued by a drone around a ‘farmkhana’ drift course to the sounds of ‘O Fortuna’, all while the awesome bastard behind the wheel heels and toes in his converse.