Ferrari has confirmed its new 812 Superfast special edition is to be called Competizione, and will be joined by the Targa-roofed Competizione A 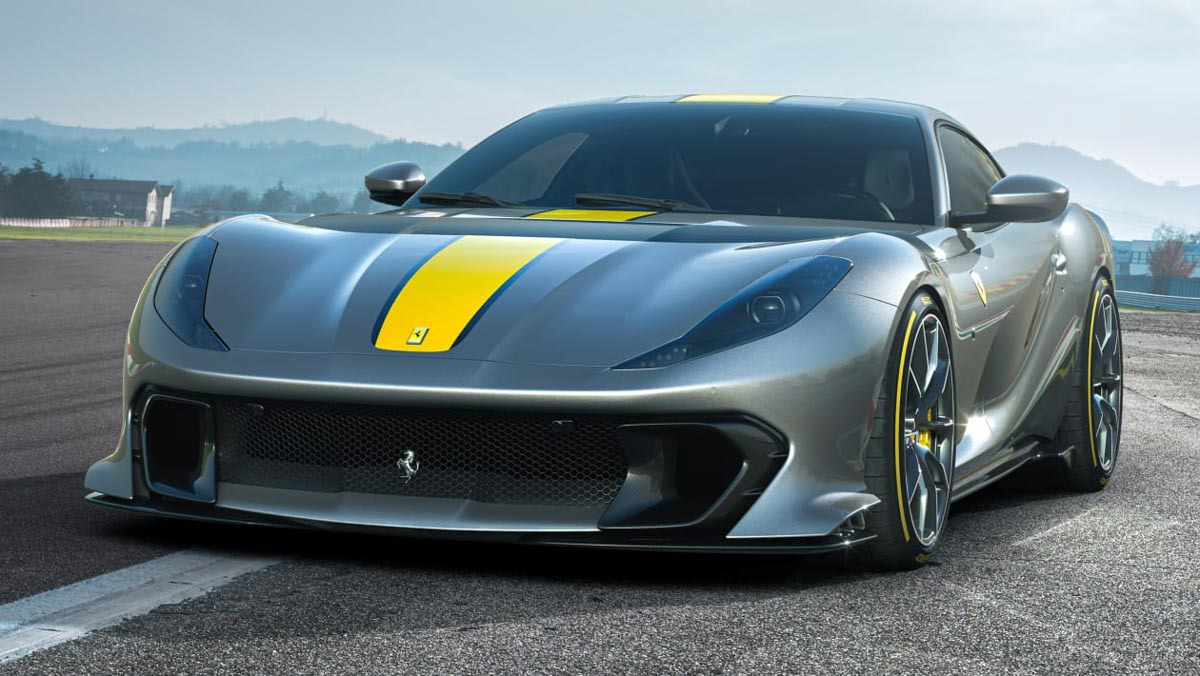 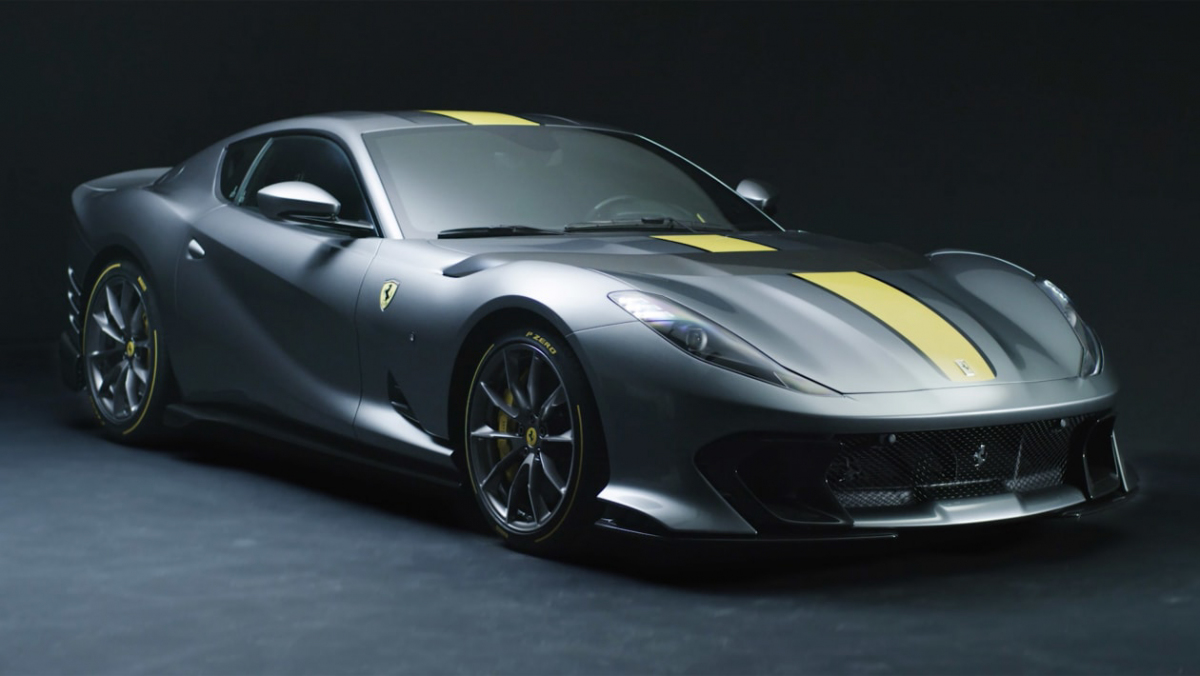 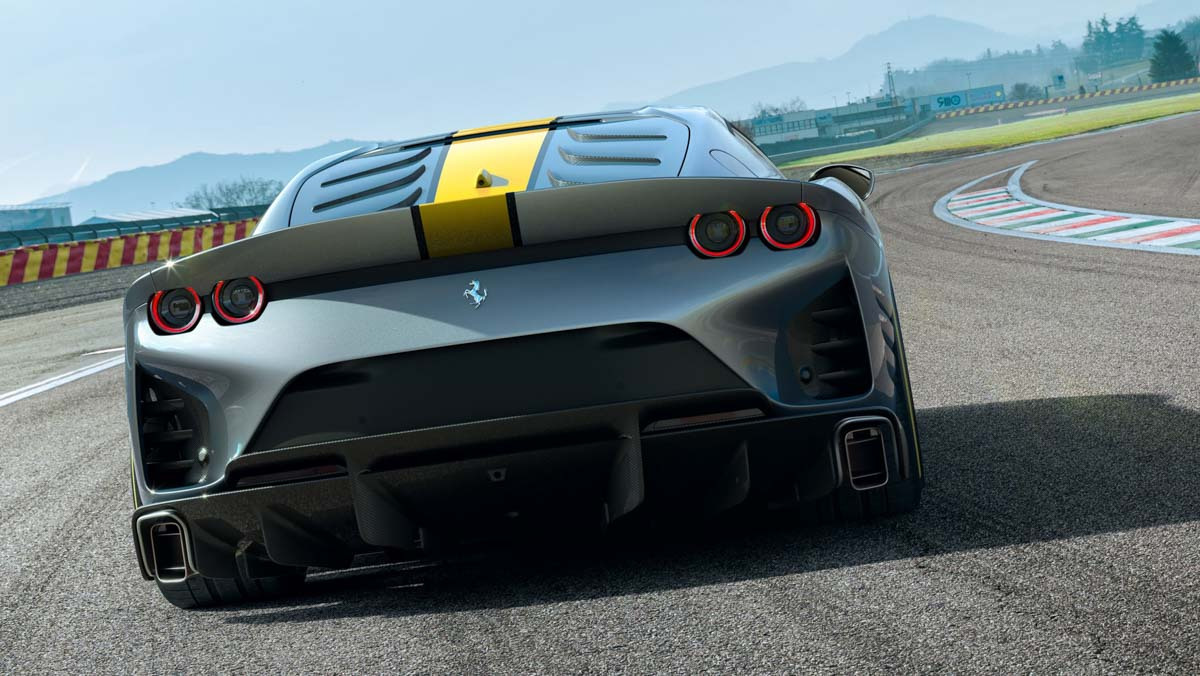 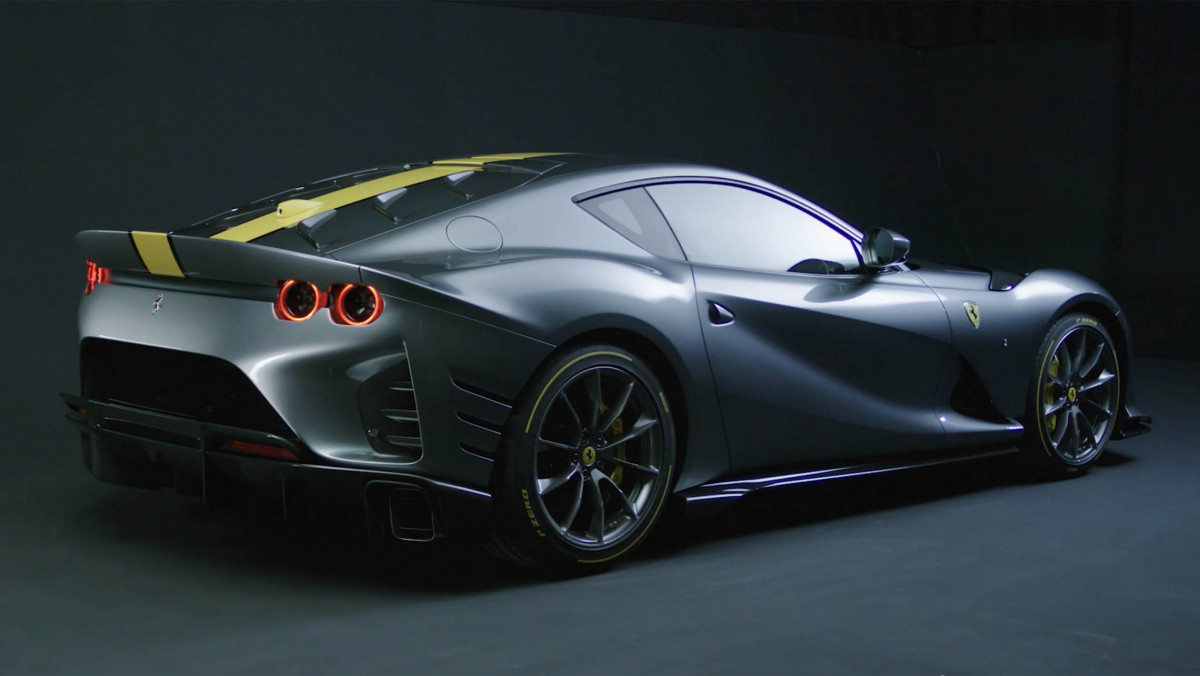 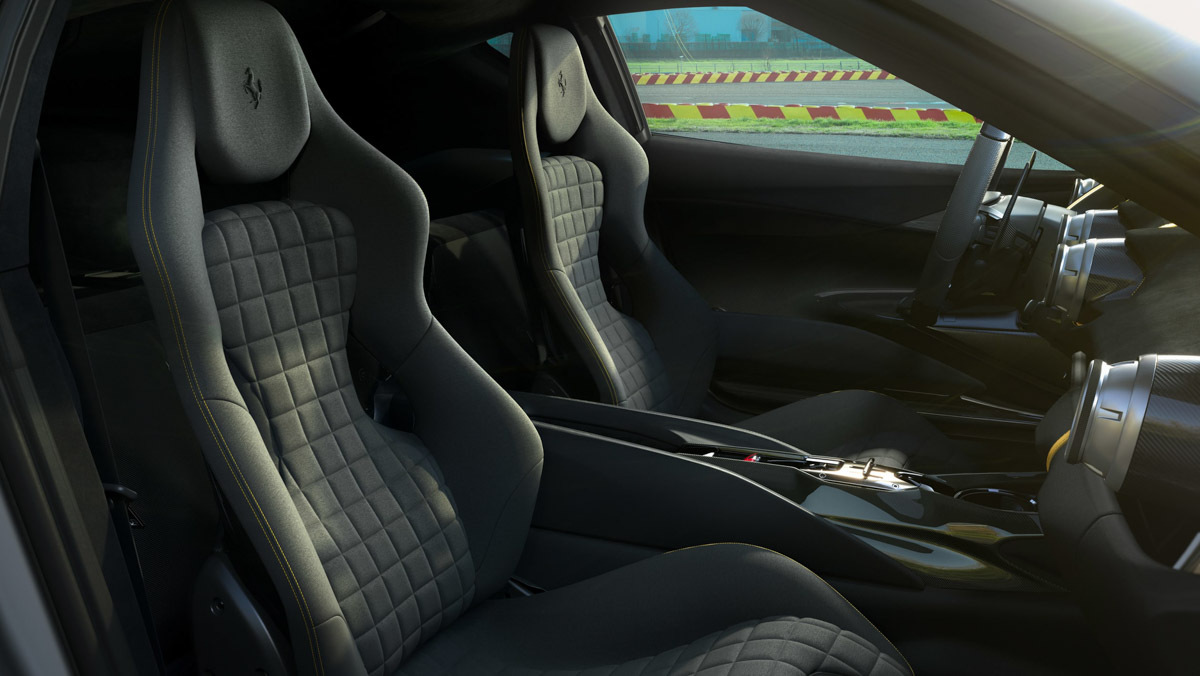 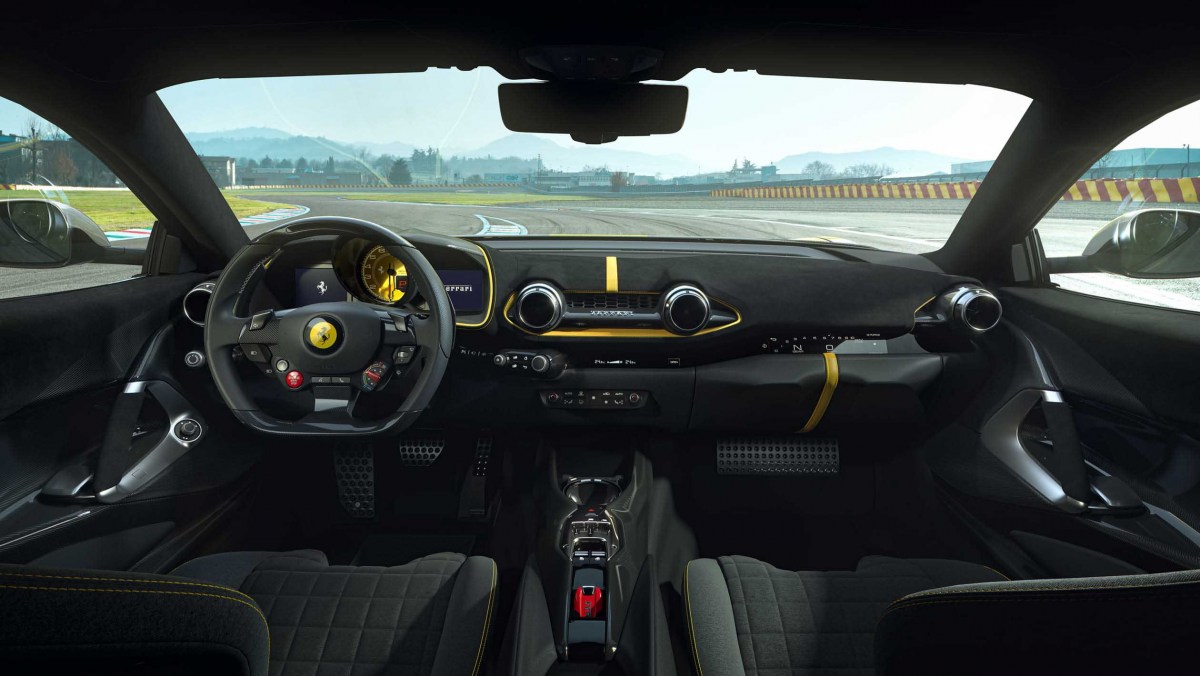 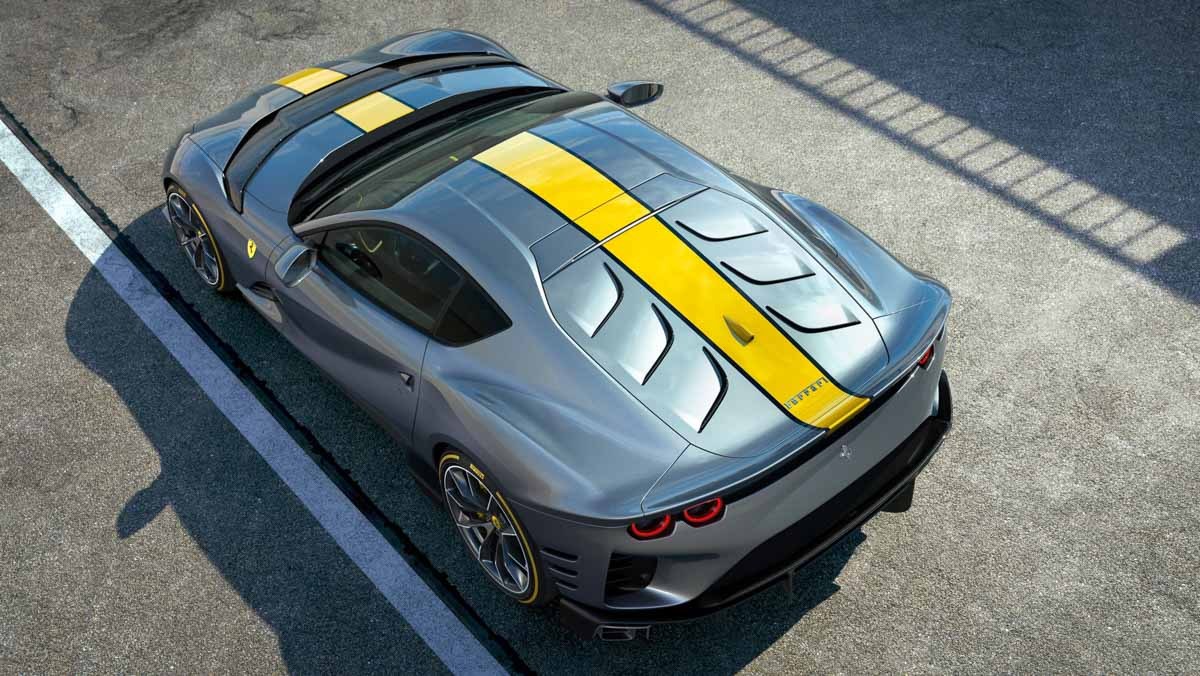 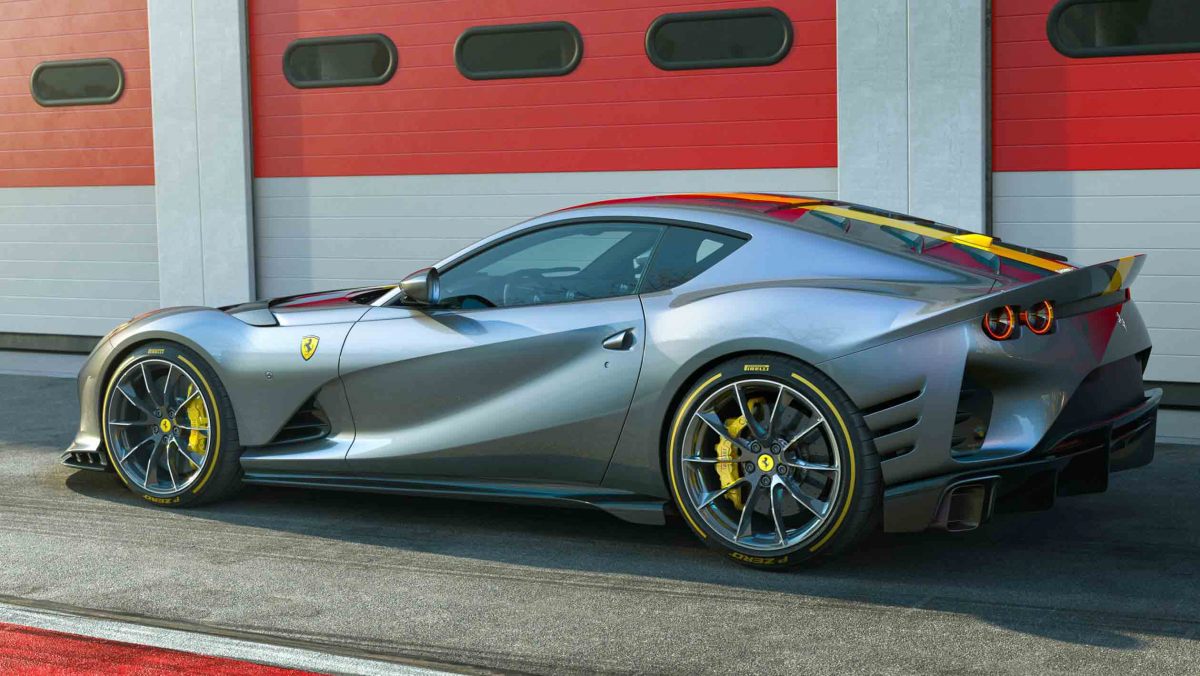 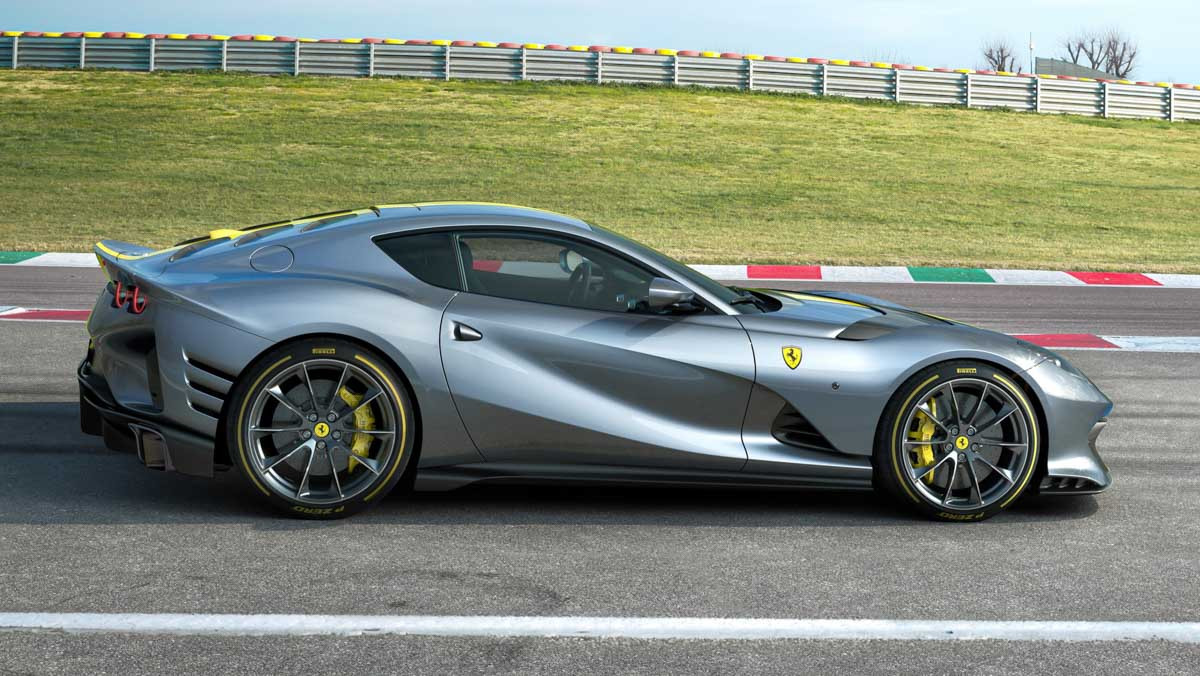 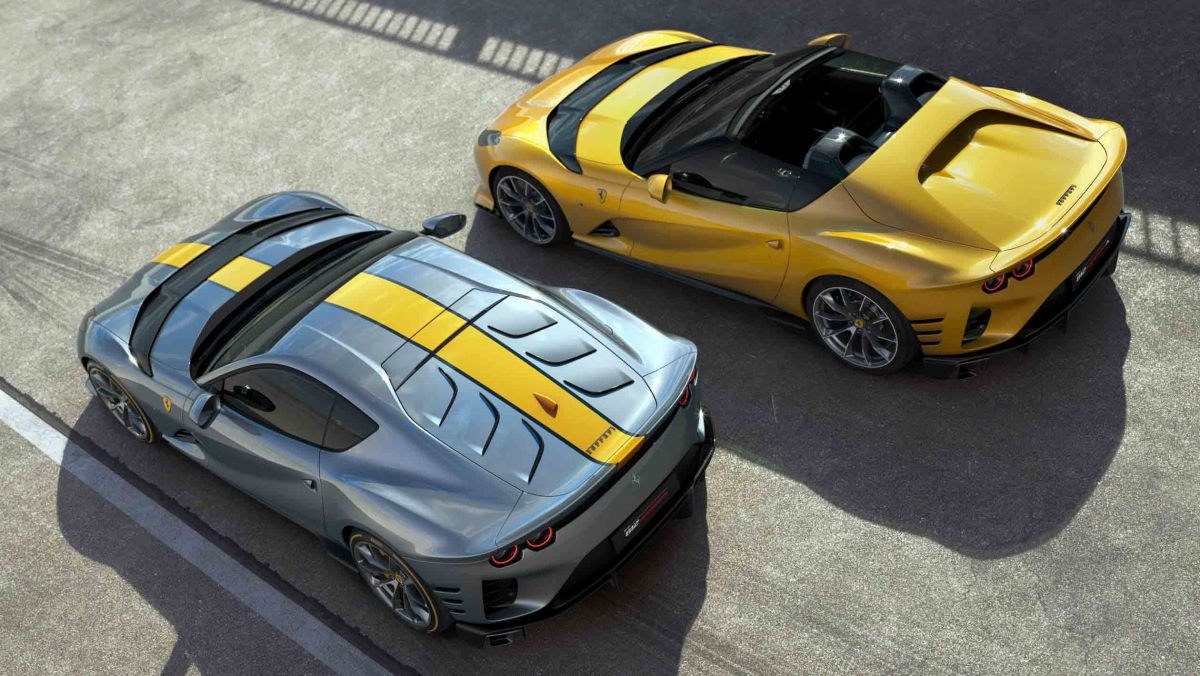 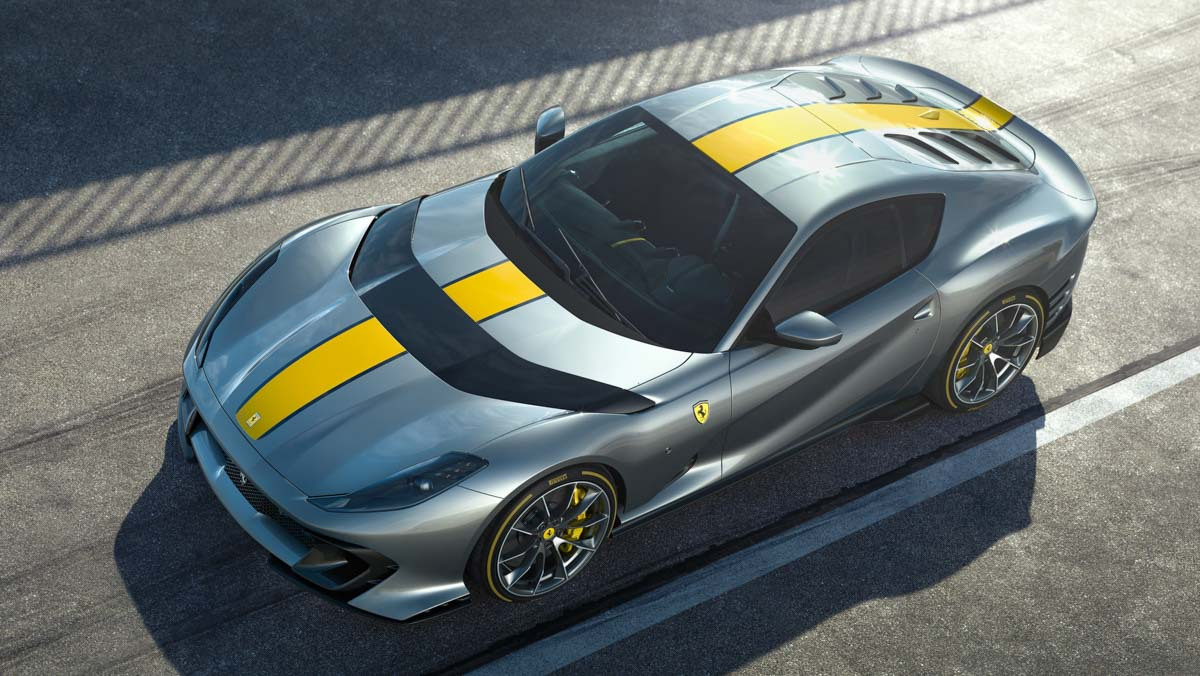 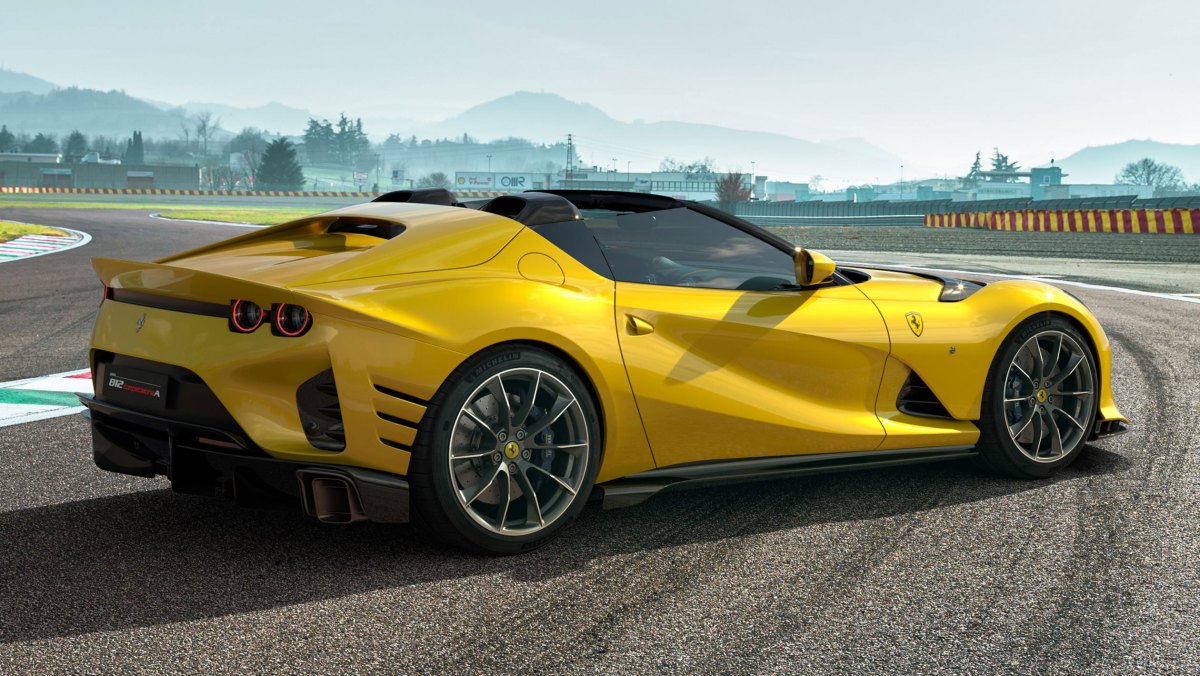 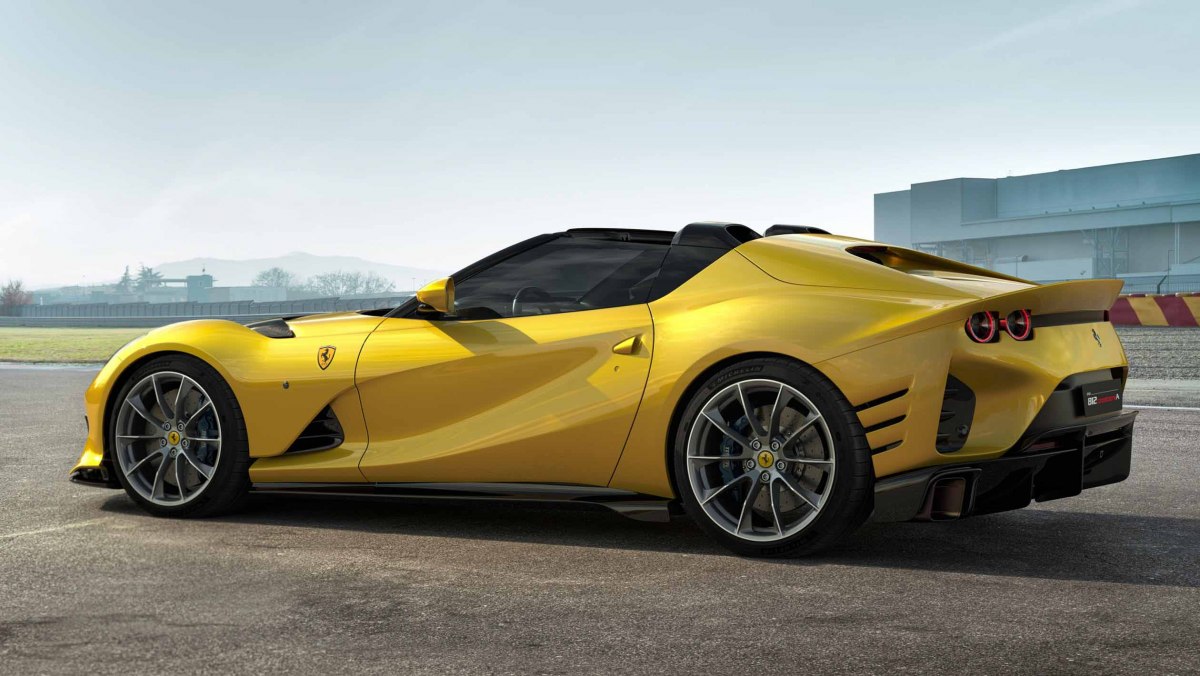 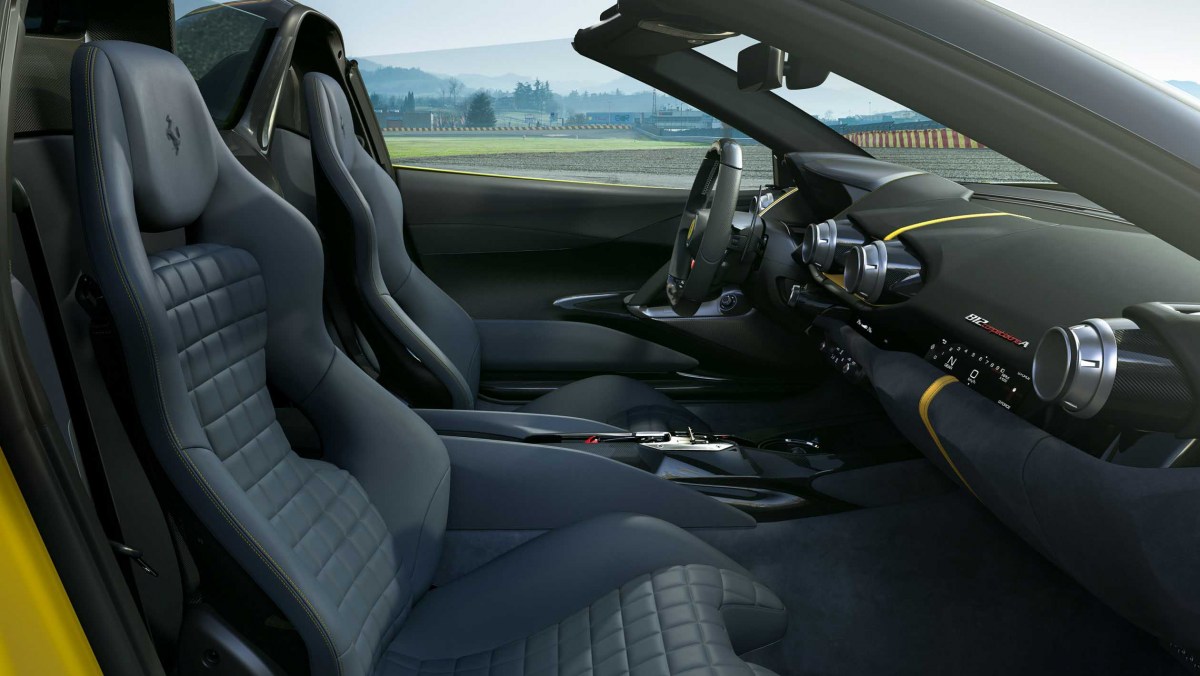 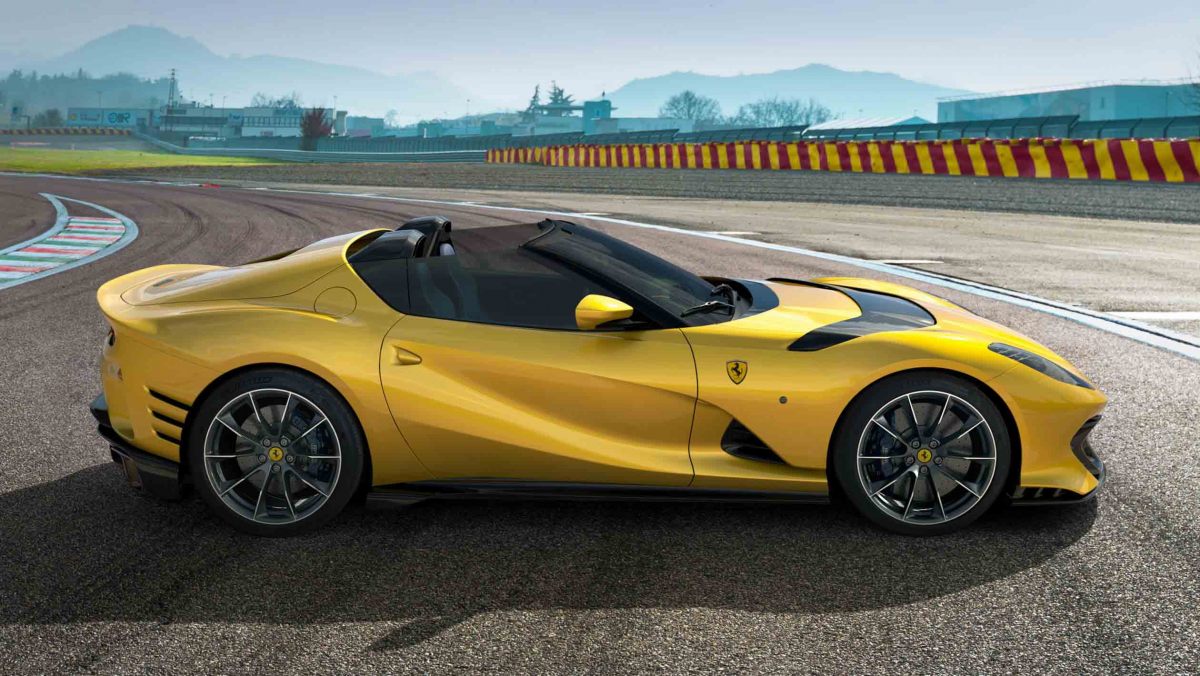 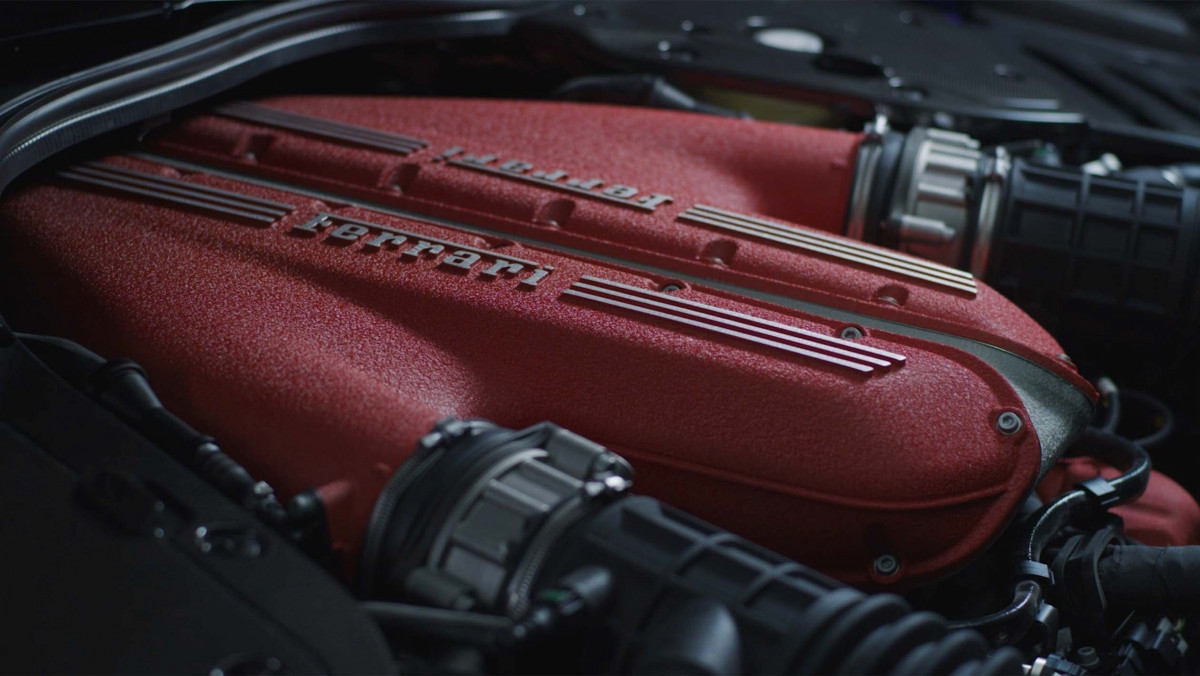 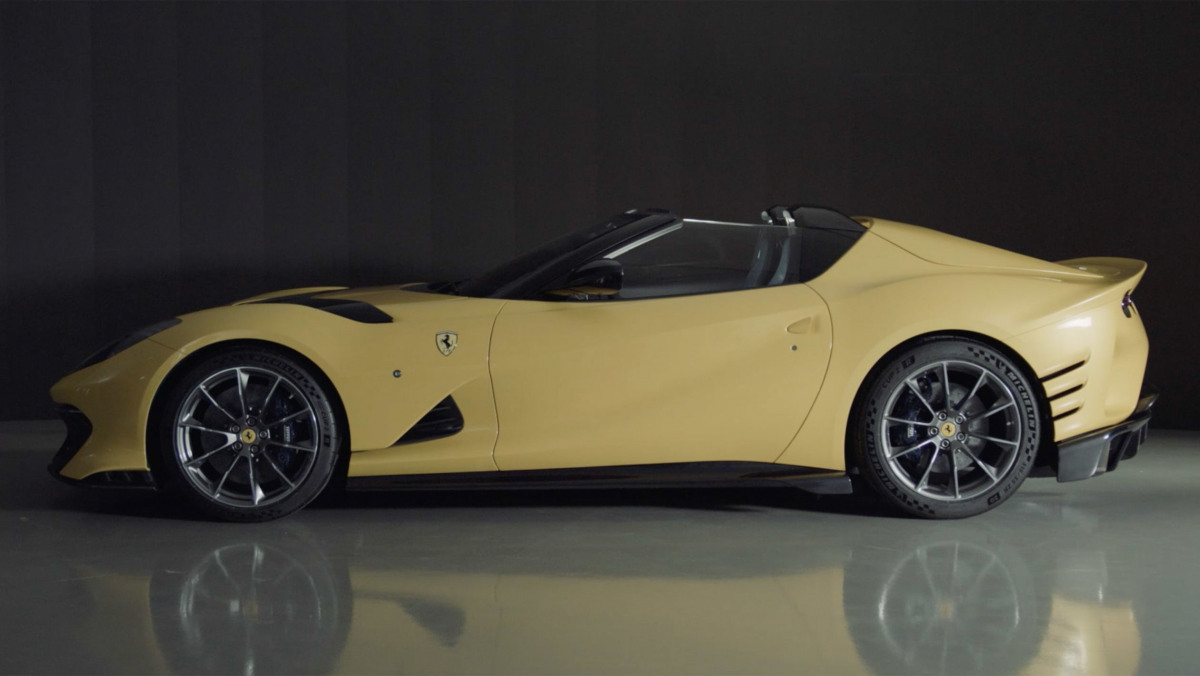 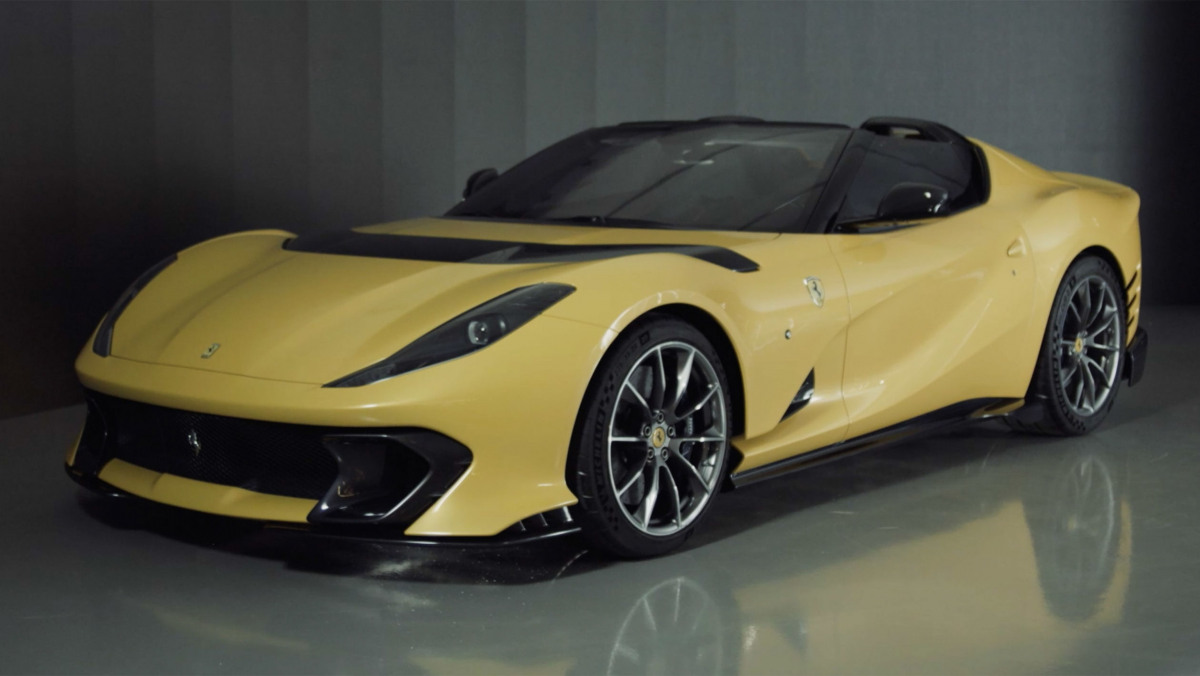 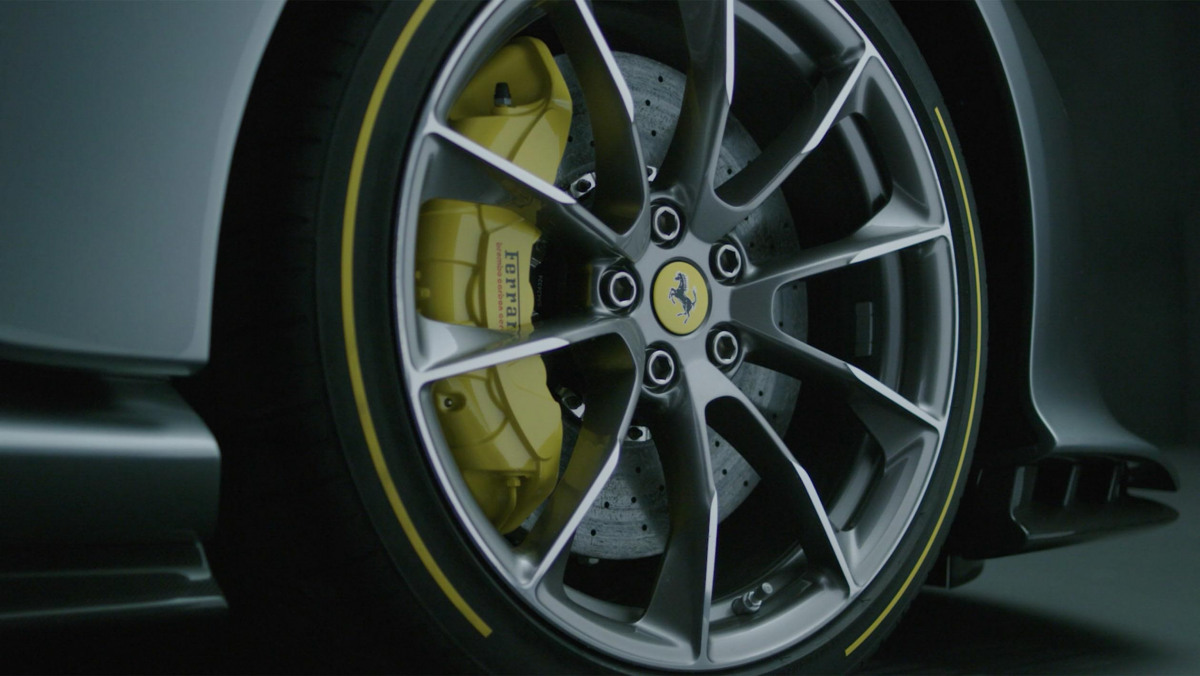 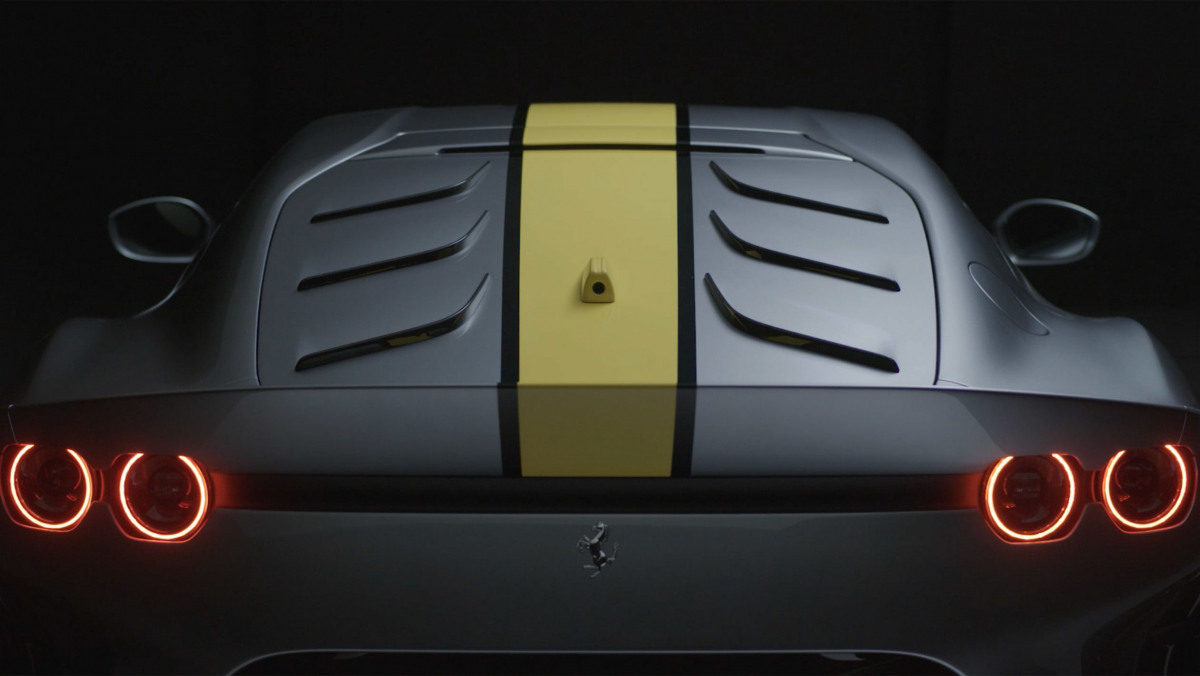 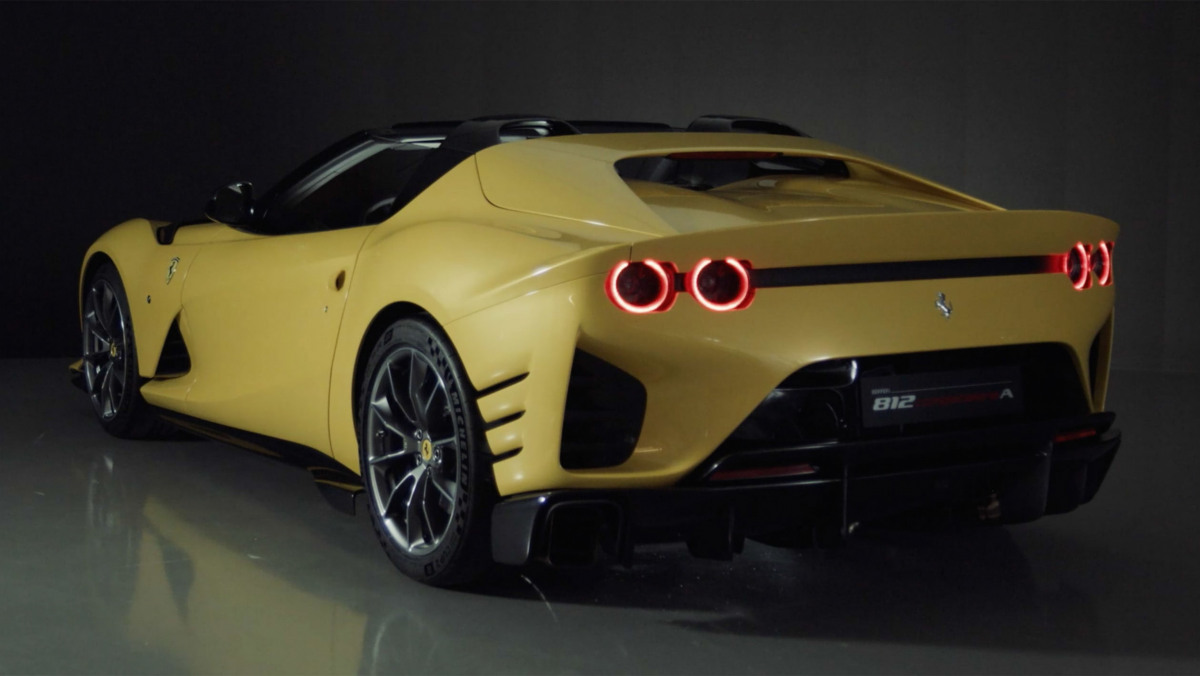 Following last month’s 812 ‘VS’ announcement, Ferrari has now confirmed its official name, a drop-top variant and extensive technical details, with a more powerful version of the marque’s 6.5-litre V12, extensive aerodynamic upgrades and the introduction of a new independent four-wheel steering system new to the model. 999 coupes and 599 Apertas will be produced in total, and both have already sold out – first coupe deliveries are set to commence in Q1 2022, with the drop-top following in Q4.

While capacity remains unchanged, many of the 812’s V12 internals have been redesigned or thoroughly re-engineered using lightweight materials. Con rods, pistons and the crank have all been optimised, with the new titanium con rods 40 per cent lighter and other components experiencing similar weight loss. The piston pins now feature a diamond-like coating (DLC) to reduce friction, which in turn improves fuel consumption, wear and performance. The rebalanced crankshaft is also three per cent lighter than in the ordinary Superfast.

That’s not all. There’s a new pair of cylinder heads too, and the cams, also coated in DLC, control valve stems via DLC steel sliding finger followers, a technology the road car division has taken from the company’s F1 engine development programme.

There’s also a redesigned intake system, with both the manifold and plenum chamber more compact to reduce the tract’s overall length, therefore delivering more power at higher revs with torque delivery optimised across the entire rev range by variable geometry inlet tracts. In practise, Ferrari claims that these changes allow the V12 to deliver its maximum performance all the way to the redline, which is now set at 9500rpm.

Talking of performance, peak power increases from the Superfast’s 789bhp delivered at 8500rpm to 819bhp at 9250rpm. Torque drops slightly from 529lb ft to 513lb ft.

Upgrades under the bonnet don’t stop there. There’s a new variable-displacement oil pump to continuously adjust oil pressure across the engine’s operating range, with a new oil tank allowing for the 30 per cent increase in flow requirements. This doesn’t come at the expense of weight though, as both Competizione models save over a kilo in oil over the Superfast, with the engine also able to use a less viscous fluid. Ferrari’s direct fuel injection system has also been evolved further to keep the 6.5-litre naturally aspirated engine within the latest emissions regulations, and a new exhaust pipe design helps maintain the V12’s vocal range even with the fitment of a GPF (Gasoline Particulate Filter).

The seven-speed dual-clutch gearbox remains, but there’s a five per cent reduction in shift times thanks to a software tweak – while the ratios are the same as those found in the Superfast, the additional 500rpm ups the ante further still.

Cooling the V12 has been integral to the Competizione’s development, which has seen Ferrari install a single front air intake on one of its V12 models for the first time, replacing the pair of intakes positioned either side of the Superfast’s central grille. Overall cooling efficiency has been improved by ten per cent, with the new intake also playing an integral role in feeding the engine’s new inlet manifold.

Keeping the brakes cool is also a key focus, eliminating the need for a larger, heavier system and ensuring aerodynamics remain untouched. To this end, the Competizione’s brake cooling was redesigned utilising the aero calliper, featuring an inbuilt air intake first introduced on the SF90 Stradale.

In reality, the new brake cooling reduces temperatures by nearly 30C, and has also allowed the removal of the 812 Superfast’s turning vanes saving in the region of 1.8kg. There are also two carbon fibre intakes flanking the car’s main grille, feeding cooling air to both the engine and the cockpit. They also reduce turbulence generated by the outer edges of the tyre’s tread, increasing front downforce as a result.

Openings in the top and rear of the wheel arch reduce pressure further, allowing the near flat floor to work more efficiently. With the front diffuser repositioned, the culmination of these upgrades are a 30 per cent increase in front downforce, with a new S-shaped side vortex generator adding a further 40 per cent.

It’s at the rear that the aero changes are most prevalent, with a new design that incorporates a handful of changes to accommodate the engineering department’s requirements around the exhaust system, diffuser geometry, spoiler area volume, the new rear screen and bumper.

There are new silencers and tailpipes, which see the traditional circular pipes positioned at either end of the bumper replaced by rectangular vertically-positioned equivalents to maximise the volume of air required by the larger rear diffuser – this also allows a blown-diffuser type set-up as utilised by F1 cars of the 2010s. Overall the changes to the rear diffuser account for 25 per cent of the total increase in downforce over the Superfast, with the new rear floor responsible for a 10 per cent increase in rear downforce. Other key aero changes include a larger rear spoiler that extends the full width of the car, also sitting higher than on the Superfast.

As for the rear screen, it’s not purely a style over function addition. It’s completely closed design allowed engineers to create vortex generators, but where in the past this type of aero technology has been to maximise downforce, on the Competizione they have been designed to distort the airflow and maximise the pressure over the rear axle, accounting for a further 10 per cent increase in rear downforce.

With the changes made to the Competizione A’s roof, a bridge element has been designed and incorporated between the flying buttresses, resulting in near-identical levels of aerodynamic performance to its coupe sibling. Two openings have also been incorporated into the pair of buttresses to manage airflow in and out of the cabin, reducing buffeting and stabilising airflow through the interior.

Underpinning the Competizione models is a new independent four-wheel steering system which allows the rear wheels to act independently of each other, rather than be synchronised – it’s also linked to Ferrari’s latest Slide Slip Control (SSC) system. Pirelli’s P Zero is standard fitment, with Michelin’s sticky Pilot Sport Cup 2 R tyres available as an option.

Being a track-focused Ferrari, weight loss has been as important as performance gains. Overall, the 812 Competizione weighs 38kg less than a Superfast, with the powertrain, body (carbon fibre front and rear bumpers, rear spoilers and air intakes) and running gear all key to the weight savings. A 12V lithium-ion battery accompanies the titanium con rods and other engine modifications to reduce weight, with carbon fibre and less sound deadening in the interior playing their part. All-carbon fibre wheels, saving a further 3.7kg, will be offered as an option.

The coupe starts from an eye-watering $600,000 and will be limited to just 999 examples, with the Aperta costing an additional $85,000 – just 599 drop-tops will be made. Even if you have the cash though, you’ll struggle to get your hands on one, as both models have already sold out ahead of first deliveries in 2022.

Should this be the last hoorah for Ferrari’s naturally-aspirated V12 road cars, it’s quite the way to go.