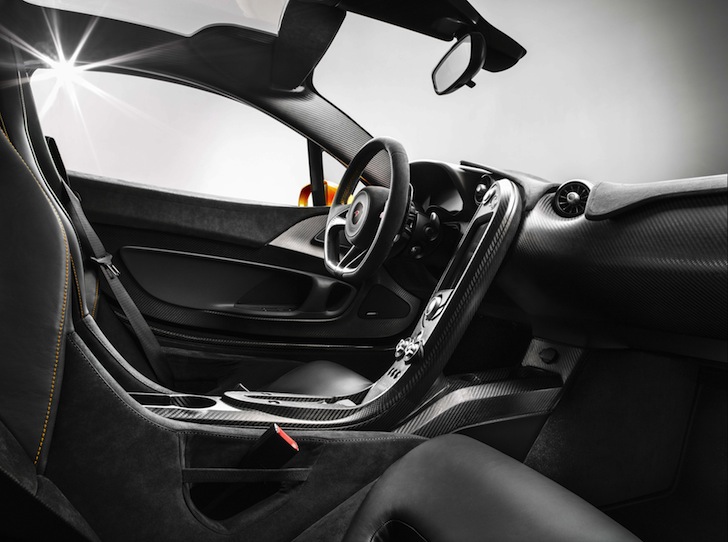 The interior – designed by Rob Melville – is perhaps the most important area of the car, Dan said.

“Obviously it needs to be very driver-focused. That’s what race cars are all about and this is a typical race car interior.

“We’ve developed a display which shows different states. In E-Mode it displays power and speed – there’s no need for gear info or anything. Then we have the Hybrid screen, which has rpm and an indication of KERS availability. And then there’s Race mode where we’ve got shift lights, which work the same as they do in the F1 car. The idea of the shift lights is that it’s like a countdown – green, red, blue, which has the same cadence and the same timing no matter what gear you’re in, so you know exactly when to grab the gear.

“The interior style theme is developed to promote that feeling of driver focus. You can see the idea of organic shapes has come through in the final article.” 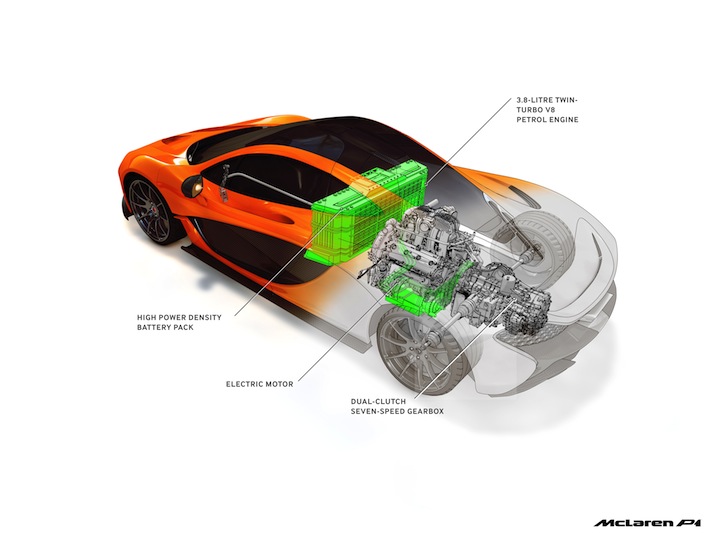 For all Dan’s assertion that the interior is the most important part of the P1, we can’t help thinking that the propulsion system is useful too. As mentioned earlier, McLaren were keen to adopt hybrid technology, but only if it brought extra performance. The result is a revised version of the twin-turbo 3.8-litre V8 found in the 12C, mated to a 176bhp electric motor and channelled to the rear wheels through a seven-speed double-clutch gearbox. The final combined output is 903bhp at 7500rpm and 723lb ft at 4000rpm, good enough for the P1 to hit 100kph in less than three seconds and on to a top speed of 350kph.

“It was very much an ambition for the car to dramatically reduce CO2,” Dan said. “We’re a forward thinking company and we can’t be in the business of making supercars and ignore it. It was the right decision to embrace the technology.

“But the philosophical debate that we had internally was we couldn’t bring ourselves to introduce a hybrid system that didn’t actually make the car faster. The same thing happened in F1 when KERS was introduced. Some teams adopted it, some didn’t to start with, because it was very a marginal call due to the weight of the system whether the car would be faster. And you’re carrying a lot more risk of problems if you’ve got new systems on the car.

“We wanted real EV performance, to surprise people, and we wanted a proper range so that the EV is a real useful feature of the car. We needed the highest performance system ever, much higher than exists at the moment. But there are no parts and we had literally no hybrid engineers, so we were starting from scratch. But that’s what McLaren’s like. We do set ourselves very demanding aspirations and then go out and do it.” 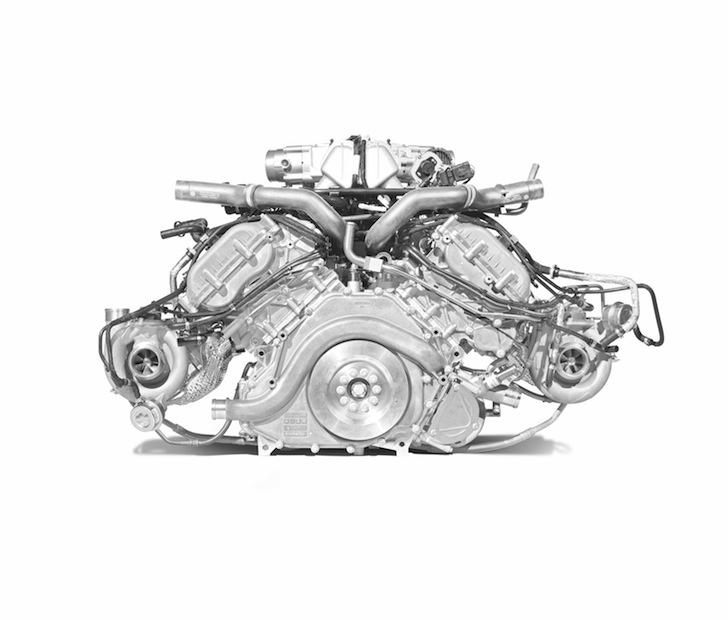 Despite the monstrous performance, the P1 manages to hit 160kph from standstill in full electric mode in less than 10 seconds, and a range of more than 10km. Not bad for a supercar. It also emits less than 200g/km of CO2.

“The really nice thing about the electric motor from a performance point of view is the way it just fits with a turbocharged engine. Because we’ve got the torque instantly we can tailor that so that whenever you put your foot down, at any speed, in any gear, you get the same punch in the back. From a drivability point of view it’s phenomenal.”

The extra grunt can be used through the KERS-like IPAS button on the steering wheel, or be set up so that it’s always on, adding torque and power to the main 727bhp of petrol propulsion. The battery recharges itself in the same way as most other modern hybrids

“Ten minutes is what the charger is designed to do but to give you an idea of the demands on the hybrid system, on a seven-minute Nordschleife lap we recharge this system twice. So that’s really pushing the system very hard indeed,” Dan said.

Is there a danger that people spending more than $1 million on a supercar might be disappointed with just eight cylinders from the petrol side of things? Perhaps, Dan concedes, but that’s the way of the world, and McLaren is always looking forward.

“Given that it’s a hybrid, it made no sense to develop a totally new engine that made another 100bhp when we already had one that we could develop to achieve that,” he explained. “It’s also quite a light engine and we wouldn’t want it to be bigger. There is an expectation that ultimate segment supercars will have more than a certain number of cylinders. But the world is changing. All of Ford’s future engine development is about downsizing and pressure charging. They’ve got three-cylinder engines where they had four, four-cylinder engines where they had six, and so on. Everybody is having to do that in response to the world we live in. The tricky part is timing it. I’ve no doubt that in five years time people will be quite comfortable with the idea of eight cylinders being enough.” 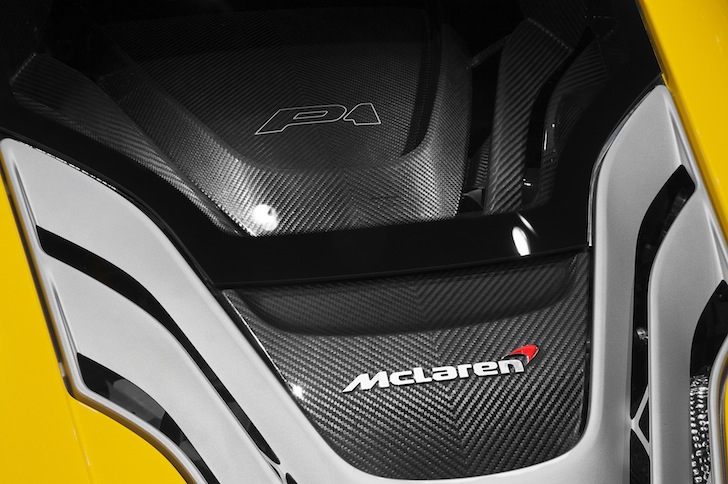 Power is one thing, but it doesn’t always translate into drama, excitement and involvement.

“One of the main things we decided from the get-go was to make the car faster as a result of the hybrid system but also to really dramatically improve the driving experience,” Dan said.

“I really wanted it to feel like you had a 9.0-litre Chevy engine behind your head. And trust me, it feels like that. Every speed, every gear; it’s just the same shove in the back, which is fantastic from a driving point of view. It’s not about the numbers or horsepower, it’s about throttle response. We’ve got seven gears and seven different throttle maps, one for every gear. That’s to give consistent throttle feel in all the gears, on tip-in and tip-out.” 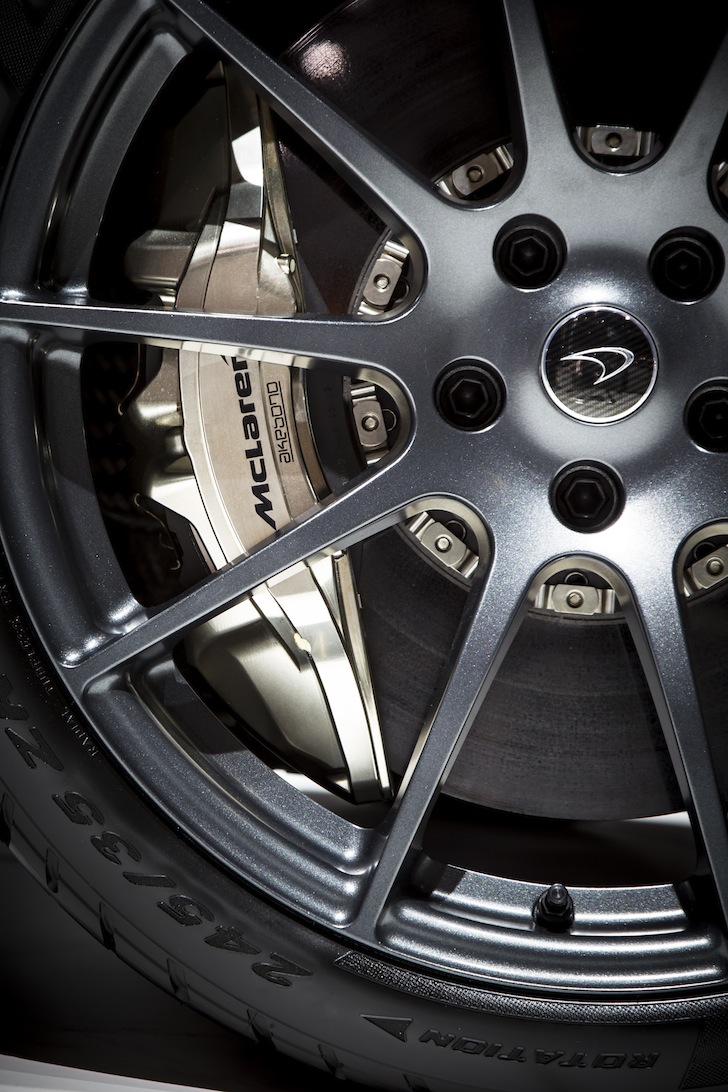 When you’ve got a stonking amount of power and a chassis built to whip between apexes, you need stopping power. And that need brought irritation to the parts of McLaren itching to sign off the car and start selling it.

“We’ve really annoyed our commercial guys by constantly fiddling,” Dan admitted. “But the car’s got to be right. Until very recently we’ve been fiddling with the braking system so that now the brakes feel absolutely solid. It feels like a race car, there’s no sense of a spring in the pedal, it feels completely reassuring and solid, but still provides you with a reasonable level of assist.

“The Akebono brakes just don’t give up. They can run hotter than other carbon ceramic brakes and in the end we ended up cooling the fluid in the calliper because the disc doesn’t need cooling as much as the brake fluid does. And they don’t even wear out.”