We sat down with Dan Parry-Williams, the chief designer of the McLaren P1, to get an in-depth look at perhaps the most eagerly anticipated hypercar ever. There follows a fair few thousand words about it.

It’s the age of the new supercar. With Ferrari and Porsche preparing to roll out their latest generation flagship machines, McLaren is aiming to decimate them both with the P1 – a machine that company boss Ron Dennis says will be the fastest sports car ever.

The Middle East will be an important market for the P1, with no shortage of wealthy McLaren customers keen to spend their cash on a world-beater. But for them to part with their money, the P1 needs to be superb. We sat down with the car’s chief designer, Dan Parry-Williams, who gave us a very in-depth idea of what we can expect. He talked a lot, so we decided to give you pretty much everything he said. Set aside half an hour or so… 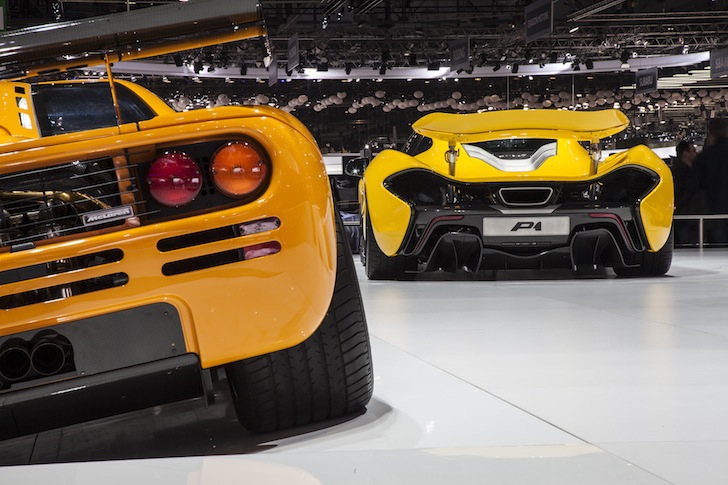 How do you follow a hugely impressive debut like the MP4-12C with a car designed to outperform that and stand outside the shadow cast by the legendary F1?

“The F1 was a very different project, it was a car designed to make tens of. This is a car designed to make hundreds of [375, to be exact] and sell all around the world,” said Dan. “Even not accounting for the differences in expectations and legislation over the last 20 years that makes it a dramatically different proposition in terms of design. The F1 financially at the time it was done was disastrous. It made money in the end because of the racing and all of the changes, but in terms of a business plan it was hopeless.”

Work on the P1 – codenamed Project 12 – began back in 2009, when the engineers tasked with producing a follow-up to the MP4-12C first sat down to decide what parameters should be set. They had orders from on-high that a few hundred should be produced, and each one needed to be “the best super sports car the world has ever seen” and must also “maintain the status of McLaren until a successor is launched”. “No pressure then,” admits Dan. 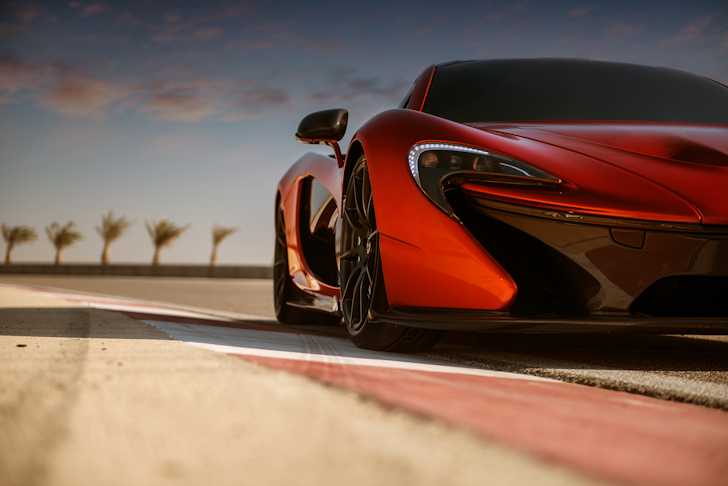 It quickly became clear that to push boundaries, the car needed to be used away from the road as well as on it.

“The 12C exceeds most people’s abilities on public roads so you really can’t expand the performance envelope of a supercar for road use,” Dan explains. No, the ultimate McLaren has to be on the track to realise its full potential. But the team didn’t want to just chase headline performance figures.

“We don’t really care about top speed. Right from the get-go it was never something we were interested in. There’s an American sports car that’s done 260-something miles-per-hour, but who cares? Where are you going to do that, anyway? It’s not just about quarter-mile times.”

From the earliest days, it was decided to make the P1 a hybrid – both for technological advancement reasons, and societal pressures. “Hybrid technology has been hanging around for a few years now and we couldn’t really ignore it any longer. So we made a decision early on to embrace it,” said Dan.

Crucially, the car had to be usable away from the track as well as astounding on it. A key part of the 12C’s appeal is its practicality and comfort around town, so the P1 needed an element of that as well.

“We didn’t want to compromise refinement and everyday usability for ultimate performance because anyone can make a really fast car as long as you don’t care what it’s like to drive in. But can you make a car that’s just as refined as the 12C but as fast as a GT race car? Stunningly beautiful but still designed for ultimate performance, and has real EV [electric vehicle] performance?”

The challenge was set. Coffee was consumed, and work began. 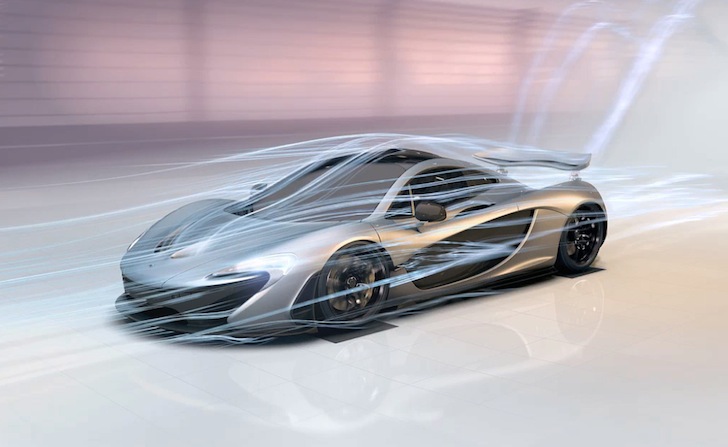 As in Formula 1 – McLaren’s other line of work – aerodynamics are increasingly key to pushing forward the boundaries of performance. To increase pace, the car has to be glued to the ground and it would take more than a front splitter and bolt-on wing to achieve this.

Dan explains the thought process of the engineering team. “We’re going to need downforce but we need to manage the platform of the car, because aerodynamically you can’t have cars going fast around tracks unless they’re really, really stiff,” he said. “And we can’t have it looking like a Chaparral. So at this point there are already tensions and conflicts in what we need to achieve. Fortunately there are plenty of people at McLaren who are capable of doing this sort of stuff; there’s quite a lot of transfer across from Formula 1.” 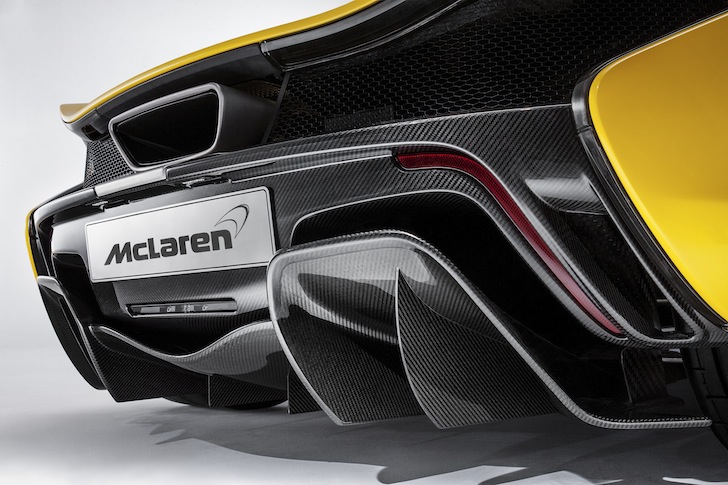 The team set themselves a target of 600kg of downforce to press the P1 to the track for ultimate cornering. That figure was reached after looking at what was possible from GT race cars.

“We picked something we thought would be really difficult, but possible,” Dan said. “We also needed to be able to get rid of the drag that’s associated with that. The drag of a Formula 1 car is like a parachute and we can’t have that when the car is in road mode. Also, the downforce varies with the speed. When you double the speed you have four times the downforce and that means that at the car’s top speed there’s more than a ton of downforce, which you don’t want.” 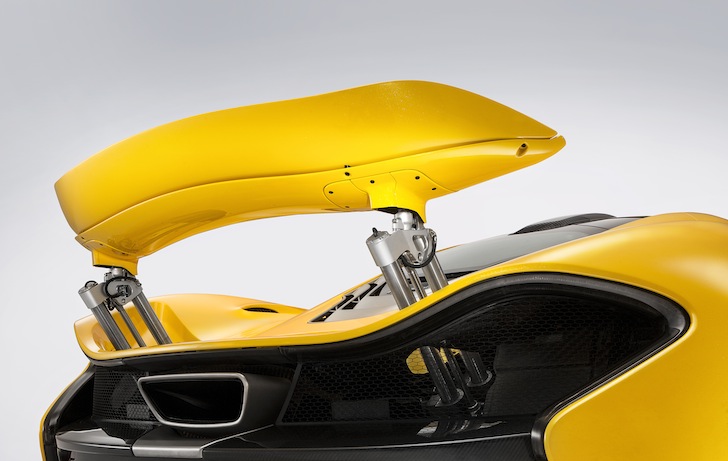 The answer, the team decided early on, was active aerodynamics. “We’ve got front diffusers in the car that have flaps in them that deploy. The diffuser generates downforce and we need to spoil that in order to reduce the drag; the door blade behind the front wheel is like a turning vane but it actually controls the wake off the front tyre. In a Formula 1 car most of the aerodynamic effort goes into controlling that, because the wake that builds up off things like tyres screws up the aerodynamics of the car further along the car.”

The software tools, as well as the people involved in the detail of aero design, are ex-Formula 1 engineers. Their expertise has led to the deck at the back of the car being very low, which reduces drag and means when the double element wing – the profile of which is taken from the F1 car – is deployed, it does so by 300mm into clean air, unaffected by turbulent wake from a higher rear end.

In addition, the canopy was designed with a teardrop shape, which reduces drag and send the maximum amount of air to the rear wing.