For Cadillac, the new CT6 ‘prestige’ saloon is more than just a new member on its line-up. It’s the model they hope, and need, to put the company back on top.

It’s the night before a regional car launch, so naturally topics of conversation at the dinner table are as you would expect: “have you seen the latest Marvel film?”; whether it was Hamilton’s fault in Spain; and Bulgaria’s chances in the European Cup. But over a few more glasses of, let’s say, mineral water, conversation has switched to the reason we’re all here, the all-new CT6. Alongside the new XT5 crossover, it’s the ‘anchor model’ for, what Cadillac hopes will be, a new era for the company, one in which the former American giant hopes to reclaim the premium segment it once owned before a couple of decades in the 90s wilderness. It’s a long-term plan that involves a multi-billion dollar investment – note the ‘b’ there – and eight new models being launched before 2020, including some segments into which Cadillac has never dared tread. But to do so, General Motors’ premium arm must first take on two prestigious linchpins, namely the BMW 7 Series and the Mercedes S-Class, and that’s struck an interesting conversation:

“Well, okay, we sort of are. But bear in-mind the Middle East is a long wheelbase market and we’re still discussing the option of an LWB CT6. So comparing it with an S-Class isn’t really accurate at the moment” 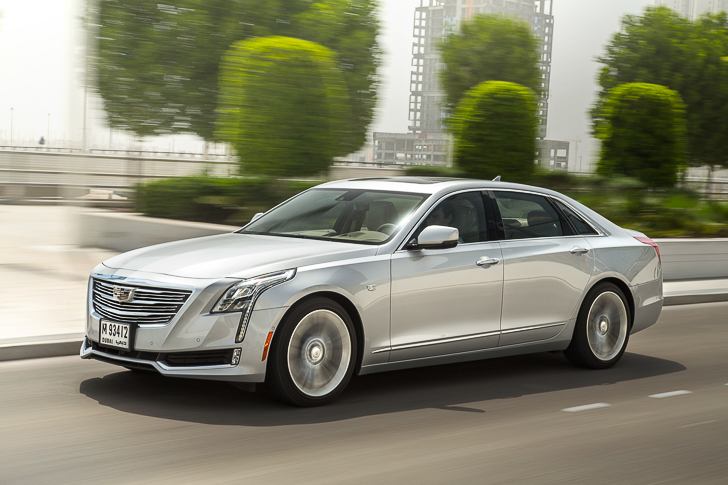 The conversation continues across croissants and a couple of strong coffees the following morning, Cadillac keen to express that, okay, yes, the prospect of a long wheelbase alternative is one the company is looking at, and saying that, Mercedes may not necessarily be on its radar just yet, the CT6 nevertheless is a premium saloon both Mercedes and BMW would do well to pay attention to.

Which brings us to the test drive itself, starting – as part of Cadillac Arabia’s ‘luxury lifestyle’ event for the CT6 – outside the newly opened Four Seasons in Abu Dhabi. I receive an assuring pat on the back as the car pulls to a halt in front of me – “you won’t want to get out of it” – and my decision is made: for the first time is as long as I can remember, I’m going to start this test drive from the back seat.

“The new CT6 is the ‘anchor model’ for, what Cadillac hopes will be, a new era for the company”

My word, it’s opulent. Free from the constraints of a steering wheel and two pedals – oh the brutality! – I spend most of the opening leg of this drive playing with the seat and massage controls in the centre arm rest, marvelling at the impressive sound deadening, and suppressing a mild grin when two TV screens slide elegantly out of the seat backs in front of me. There’s a couple of minor niggles of course, given that the space between the front seat and the carpeted floor is not quite large enough to slide my hearty brogues beneath, there could be a dash more headroom, and I do wonder if, even for a prestige vehicle, the rake of the rear ottomans is so aggressive that the supportive nature of the seats suffers slightly.

But overall, it’s a deliciously pleasant start to my day: I particularly like the way the roof concaves upwards so those of a loftier build don’t clout their skulls. And sweet Lord, with the massagers on, the revised Magnetic Ride Control suspension working overtime on the ride quality and the pillowy leather I’m leaning ever further into, it makes me wonder why I don’t start more test drives in this manner. 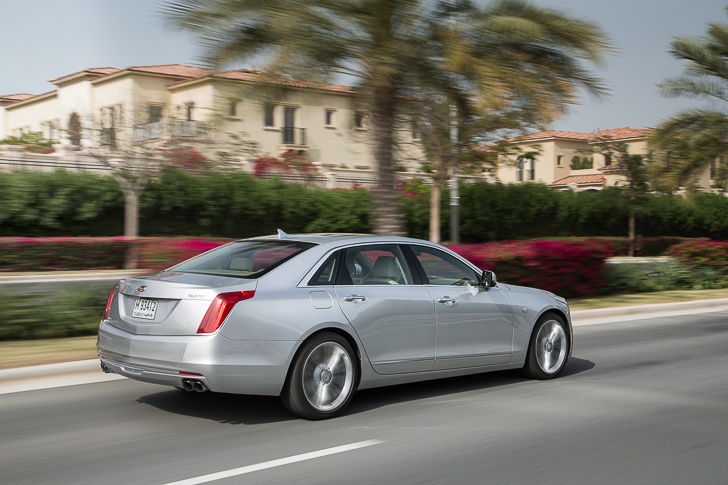 A good start then for the people working on ‘making Cadillac great again’, and it should therefore come as no surprise that the CT6 has received some major work beneath its Armani shirtsleeves. At the heart is an aluminium-intensive chassis, designed to reduce both the weight and the car’s centre of gravity. High-strength steel has also been added to improve torsional rigidity. At one stage the idea was to have the chassis made COMPLETELY of aluminium, though the costs attached to that plan no doubt caused Cadillac to rethink its strategy. Effectively so too, for even with that big, heavy all-wheel drive system, our CT6 test model still – quite incredibly – weighs ‘only’ 1853kg, just under 30kg less than the CTS-V with which it shares underpinnings, despite being more than 200mm longer. Cadillac even claims the structure itself is stiffer than an ATS, if you can rap your noggin around that.

It’s not just the chassis though that’s received work, for alongside the established 335bhp 3.6-litre twin-turbo V6 already on Cadillac’s books is a brand new 3-litre twin-turbo variant exclusive to the Cadillac brand that produces 404bhp and 400lb ft of torque. Cylinder deactivation (a first for a turbocharged V6, no less) and the inevitable weight saving that comes with it show Cadillac still has its eye on those all-important fuel efficiency readings.

“They may not be on Cadillac’s radar just yet, but the CT6 is nevertheless a premium saloon both Mercedes and BMW would do well to pay attention to”

There is though slightly more to it than that, for alongside the ‘pulse lowering’ nature of the new CT6, Cadillac has also been keen to promote its agility. An interesting prospect for a near two-ton premium saloon, though not – as we found out last month with the BMW 7 Series and Mercedes S-Class – an absurd one. It’s with slight begrudge-ry then that, after an hour or so, I eventually give up my place in the back to take up position at the front.

The route for today’s drive is not what you’d call the most dynamic, nor – in all honesty – is it the most spell binding, consigned as we are to a few laps of Abu Dhabi’s city centre, down the corniche and the highways that surround it. Fortunately a supple ride quality, one of the quietest cabins we’ve ever experienced, and possibly the world’s best stereo system mean that in terms of indulgence it’s a solid tick. In terms of the mooted ‘dynamism though, I’m still sceptical as we pull up again at the Four Seasons and swap seats.