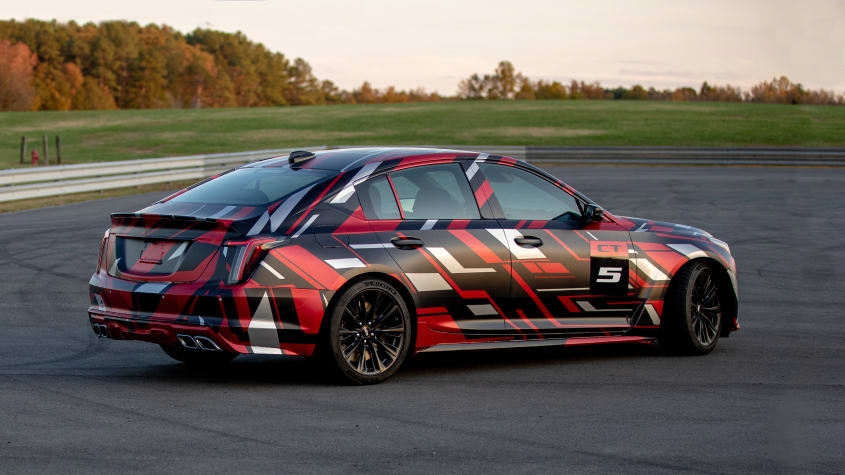 Production of Cadillac’s BMW M5-rivalling CTS-V saloon came to an end early last year, but almost as soon as it went, a new model’s about to take its place. Cadillac initially launched the V6-powered CT5-V last year with a huge drop in power compared to the respective model it replaced, but has since revealed a new performance flagships under the Blackwing nomenclature that will fill the void.

Details are scarce at this stage, but new information reveals that testing on the Blackwing models is well under way, ahead of a launch expected next year. Though the Blackwing name was previously attached to Cadillac’s high-tech 4.2-litre twin-turbocharged V8, Cadillac has since controversially stopped production having only featured briefly in Cadillac’s flagship CT6 saloon, making it unlikely to find a home in this new CT5-V.

Though still speculation at this stage, the engine likely to be used instead is the pushrod 6.2-litre supercharged V8 LT4 – a notion supported by the sound of the prototype in this new teaser sound clip. Cadillac has also confirmed that it will be available with a manual transmission.

Power and torque figures for the BMW M5 rival could exceed the 640bhp and 630lb ft of the previous CTS-V, paired to either the aforementioned six-speed manual or a ten-speed automatic. This should equate to an under-4sec 0-100kph time and a top speed of over 322kph. The smaller CT4-V Blackwing should follow in the CT5-V’s footsteps, with a high performance model due from a more potent twin-turbocharged V6, producing somewhere around 450bhp and 445lb ft of torque for a sub-4.0sec 0-100kph sprint.

Confirming these increases in performance in a statement to the media, the Detroit marque also revealed that both models posted faster lap times around Virginia International Raceway than their predecessors, one of which being the fastest road-going Cadillac ever sold.

Cadillac executive chief engineer Brandon Vivian said: ‘The Blackwing name has come to represent the very best of Cadillac performance engineering, craftsmanship and technology. The new CT4-V Blackwing and CT5-V Blackwing build on the brand’s respected legacy of ultimate-performance driving experiences and elevate them even further.’

If this new pair of performance saloons sound like tempting alternatives to the European establishment we wouldn’t suggest holding your breath though, as GM’s European operations wind down to focus on more lucrative markets like North America and China.

Previous ArticlePorsche 918 Spyder review – better than the McLaren P1?
Next Article This Ferrari 250 GTE is the world’s coolest police car