What climate crisis? Ford to balance out EV ambitions with its 700bhp F-150 Raptor R 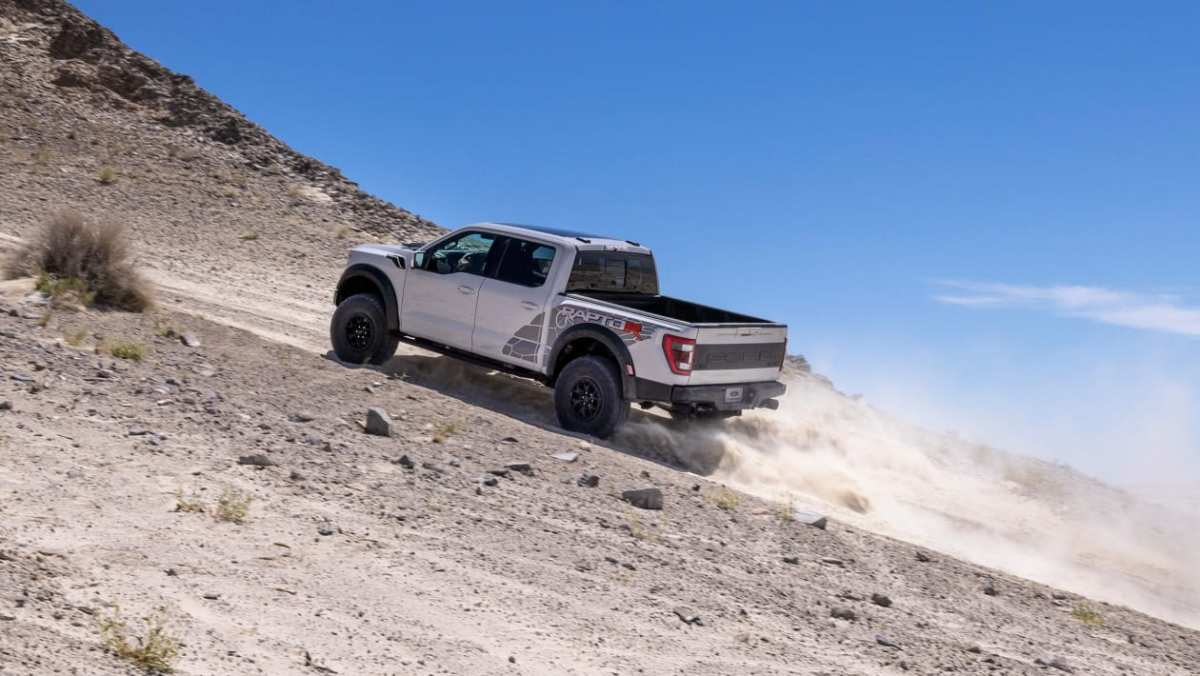 Ford has revealed official details of its production-ready F-150 Raptor R. As with the current F-150, Ranger and Bronco, the Raptor moniker refers to this F-150’s rugged high-speed off-road specification, but the R ditches its Ecoboost V6 engine for a 700bhp supercharged 5.2-litre V8.

The key element of the R is the aforementioned V8 engine which first appeared in the brilliant Ford Shelby Mustang GT500. It’s running a light de-tune here, with 700bhp instead of the 500’s 760bhp. Still, combined with a 640lb ft torque figure, it brings this flagship F-150 right up to date with its key American rival, the Ram 1500 TRX. The numbers are close, with Ford giving only 2bhp and 9lb ft away to the Hemi-powered Ram, and until we’re given official acceleration times, the Ram’s 4.5sec 0-100kph figure remains the time to beat.

Ford’s engineering team has dug right into the powertrain to ensure it meets the requirements of a Raptor model, including recalibrating the supercharger with a new pulley that optimises low- and mid-range torque output compared to the peakier Mustang GT500. There are also upgrades to the cast exhaust manifolds, there’s a new oil cooler and a redesigned oil pan that’ll handle extreme gradients without starving the bottom end. The engine’s breathing has also been rejigged, with a wider intake inlet and a higher-flow air-filter.

Power is transferred to all four wheels via Ford’s ten-speed automatic transmission. This is the first time Ford’s 5.2-litre engine has been connected to this transmission as the GT500 utilises a seven-speed dual-clutch brought in from Tremec. To handle the extra weight of the V8, the R picks up a new front axle with tougher engine and suspension mounts.

As with all Raptors, the R ditches a traditional live rear axle for a five-link independent system with longer trailing arms, a Panhard rod and massive 24-inch coil springs. These elements allow for huge wheel articulation, supported by Fox ‘Live Valve’ adaptive dampers that read road (or off-road) conditions and adjust accordingly. Wheel-travel is a huge 13 inches at the front and 14.1 inches at the rear – useful for the Walmart car park.

There have only been subtle upgrades outside to set the R model apart, such as a taller bonnet catering for the inverted supercharger that sits atop the engine, but the rest is identical to the standard car, save some bespoke decals and orange elements in the badging. Production of the Raptor R will commence at the end of 2022 with prices still to be confirmed – sales will be limited to North American markets.