One car, two keys: one unlocks the full 707bhp fury of Dodge’s most aggressive Charger yet, the other a more leisurely 500bhp. But how do they compare?

Looks good, doesn’t it? In developing the revised Charger for 2015, Dodge has not been shy with the garish paintwork and taut bodylines. Indeed, as part of the company’s 100th anniversary, the four-door saloon has been given a full makeover with nearly every body panel replaced to create a ‘sleek, nimble appearance’.

Clearly the gentleman working on the nose didn’t receive the memo though, the slick headlights, intake-heavy front bumper, massive bonnet bulge and scalloped body panels indicative of the brand’s tarmac melters of old. Indeed, the overall look was inspired by the ’69 second generation Charger, while the larger, power-bulge aluminium bonnet – complete with cold-air intake – is a nod to the ’96 Viper, the finished result riding aggressively on 20in Hyper Black Aluminum ’Slingshot’ rims. I realise that looks are a subjective matter, but to me the look is the steroid-injected bees knees, one truly befitting the ‘world’s fastest and most powerful saloon’. Well, when you’re using the correct key, that is…

“Dodge has provided a radiation suit with 500bhp valet mode”

Among the quirkier elements of the new-for-2015 Dodge Charger SRT Hellcat is its dual key fobs – one black, one red – designed to limit or unleash that atomic 707bhp output from the 6.2-litre supercharged V8. Fortunately Dodge has provided a radiation suit in the form of the pin-code activated ‘Valet Mode’, which limits that power to ‘just’ 500bhp. Alternatively, with sensible trousers affixed, this can also be done by using the black key, which limits engine revs to just 4000rpm, turns the ECU fully on, launch control very much off, and even disables first gear completely. Power-wise, the Hellcat in ‘black key’ mode is only slightly more than the larger displacement 485bhp 6.4-litre HEMI that powers the Charger R/T, but compared with the 370bhp 5.7-litre V8 in the standard Charger, there’s a gulf between them that could easily fit a 130bhp MINI Cooper. One thing you could not say about the Hellcat – or indeed any of the Charger range – is that it lacks power. 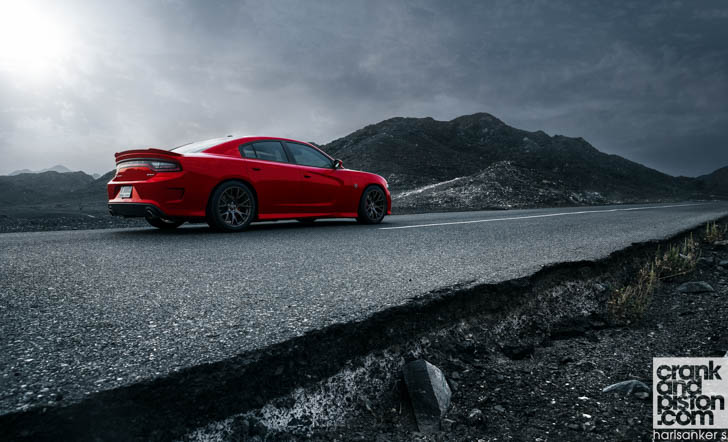 It’s the manner in which this power is put down though in ‘black’ mode that may surprise: despite the ferocious look at the front and that lowered ride height, at first this is not a particularly scary cat to drive. It could even be, and I hesitate to say this, quite civilised. Like the exterior, the cabin has been given a full-refresh, topped with black/Red Rubu Nappa leather sport seats (complete with embroidered SRT logo), lashings of cabin space, and an updated infotainment system with touchscreen: look to the right of that and you’ll find the ‘Eco’ button, presumably mounted for purely comic relief.

It’s a minimalist and modern look, albeit not without its niggles: the carbon fibre-esque dashboard is a little much I feel, I’m not a big fan of the shawn paddle shifters nor indeed the button-heavy multifunction steering wheel, and compared with the quality materials used throughout the rest of the cabin, the red starter button does feel more like a bottle top than the firing plug for a nuclear weapon. On the move, however, the Nappa leather is wonderfully giving, and though the dampers have been tweaked for improved performance, the suspension settings are softer than you’ll find on the Challenger, the Charger Hellcat as a result offering far greater ride quality than its two-door sibling.

Not that I wish to get too carried away of course: refined the interior and ride quality may be, but set the rears alight and that supercharged V8 still packs the same raw, sledgehammer-like blast of acceleration we experienced not that long ago with the Challenger R/T, complete with drum-crushing eight cylinder growl. There’s plenty of stopping power in those massive Brembo brakes too (which comes as a relief as the speedometer reaches slightly-over-illegal figures) even if the pedal doesn’t exactly drip with feel. 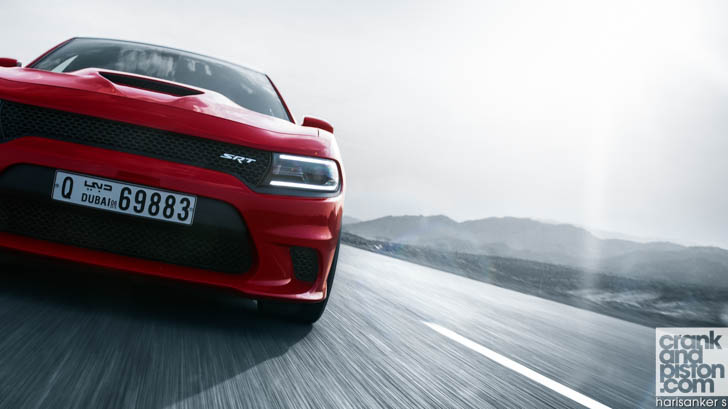 In an age where power-assisted steering seems to be ripping most of the feel from the driving experience, Dodge’ EPS setup remains magnificently hefty lock-to-lock, the steering surprisingly engaging for a muscle car. Not that there’s much in the way of agility through the turns, however. Certainly the sheer amount of grip from those Pirelli P-Zero Neros (all-season, incidentally) means that understeer is only a concern when truly on it into the corner, at which point the 20in alloys stand little chance against both a 2075kg kerb weight and that mighty V8 barrelling towards them.

Saying that, the rears stay tight to the line, locked by a traction control system that thankfully does not interfere when it’s only partially disabled in Sport mode. There is still body roll to contend with though: the centre of gravity is still too high to offer the balance of an established sports car or performance coupe (clearly I’m starting to pay for that supple ride quality). Also the updated eight-speed TorqueFlite automatic box can be slightly dopey through the twistier sections: drop two shifts in succession and it’ll take a few moments to catch up, by which point you’re already into the corner, the car’s balance irrevocably askew. 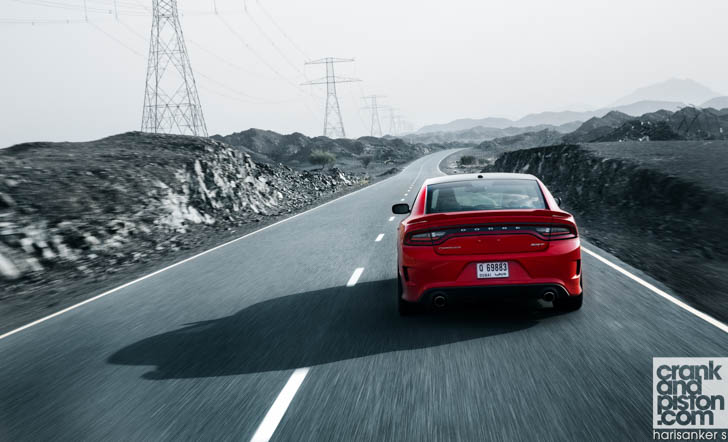 This may all read as quite negative, and were I expecting hatchback-esque nimbleness from the Hellcat, I probably would be feeling quite deflated. But this is still a muscle car we’re talking about, one of the few surviving examples of its gene pool. Yes, a little added composure through the turns wouldn’t go amiss, the gear changes could be tighter, and there are perhaps a few too many things going on in the cabin. There’s little denying though that on the move, with that awe-inspiring acceleration, the civilised ride and that sense of charisma created by the V8 soundtrack, it’s difficult not to be sucked in by the Hellcat. By it’s very nature – and name – it’s a big, shouty, dramatic creature, one which – admittedly – has been slightly neutered by using only 500bhp of its 707bhp potential.

And with that being said, I can’t help but wonder how things would have been if I’d chosen the red key instead…