This thing is insane. No, I mean PROPERLY insane.707bhp. Try and wrap your head around that. Seven HUNDRED and seven. From a mid-sized four-door saloon. In terms of raw power, that’s up there with the Lamborghini Aventador, the Ferrari F12berlinetta and the Pagani Huayra. It’s more than an Alfa Romeo 4C and Porsche 991 GT3 combined, and only 43bhp less than the hyper-exclusive Aston Martin One-77. All this from a car that has four doors, four proper seats, a big boot and could arguably perform the school run better than a Porsche Panamera Turbo, an Aston Martin Rapide S or a BMW M6 Gran Coupe. All of which, once again, the Charger out-powers, and against which is at least $95,000 cheaper (and in the case of the Aston, nearly $177K). Again, try and wrap your head around that, because I’m struggling to…

Said 707bhp hell raising is the headline act of the newly updated Charger’s extended engine line-up. And good God, can it shift: top speed in the supercharged Hellcat is a dizzying 328kph and 0-100kph is taken care of in a traction-limited 3.7 seconds. And once again, that deserves a little perspective: on the run to 100kph, this two-ton saloon is leaving the Bentley Continental GT Speed, Aston Martin Vanquish, Jaguar F-TYPE V8 R and BMW M3 behind.

For this run I’ve opted for the red key (complete with ‘Panic’ button) which offers top banana in terms of performance figures, namely 707bhp – 80bhp of which is produced by the supercharger alone – and 650lb ft of torque. And that’s just for starters. The chassis for instance has been fine-tuned to further improve rigidity, while lighter wheel axles have been incorporated to save weight. Performance-tuned Bilstein suspension should ensure improved road holding while larger four-piston Brembo brakes attempt to control all that phenomenal power being sent to the now-larger 20in wheels at the rear. 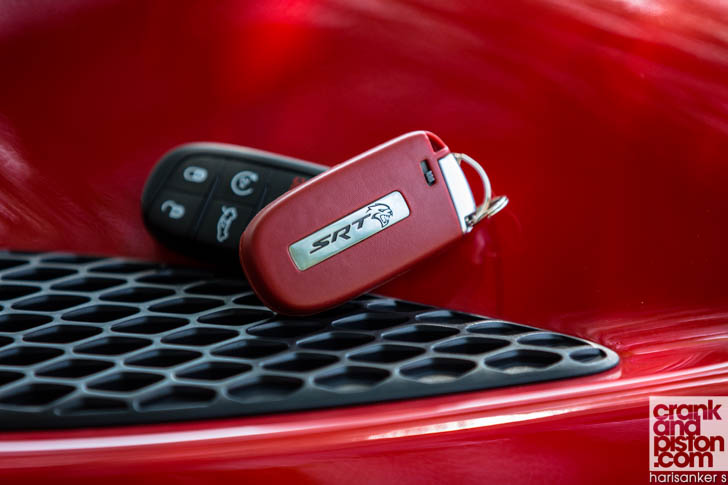 Similarly of note is the updated eight-speed automatic ‘box, which replaces the outgoing five-speed for swifter changes and offers maximum engine-torque capacity 30 per cent higher than any other gearbox on Dodge‘s line-up. And while all this does lead to a slightly weightier model over its contemporaries (the Hellcat is nearly 100kg heavier than the SRT and nearly 300kg more than the base SE), performance is beyond question.

“Indeed, you don’t really ‘gain speed’ in the Charger Hellcat. You teleport.”

Bite from the engine is immediate. And violent. The supercharger offers a wave of grunt that is remarkably progressive whilst at the same time, utterly unforgiving. It’s an action that’s accompanied not only by the sonorous roar of the V8 Doberman leashed just a couple of inches from your shin bones but also the high-pitched whine of the supercharger furiously pulling in air like it’s on sale at 90 per cent off: close your eyes (not on the move, preferably) and you’d think you were being pursued by a 1930s police siren. That the Hellcat would be fast on the straights is inevitable: an NRHA-certified run confirms the Hellcat will demolish the quarter mile in just 11 seconds, and on street tyres no less. Where the Hellcat does surprise though is through the corners, such is the impact of the revised chassis and performance-tuned suspension which offers a significant improvement through the corners over the more wayward R/T.

That of course is when you have the traction control on. Select the almost hilariously understated ‘SRT’ button on the dashboard and the Playstation generation can work feverishly refining throttle and gearbox response, and, of course, setting launch control (you can probably guess how liver-rupturingly quick that is). For the rest of us, selecting ‘Track’ puts everything in hairy-chested-man-mode. Hit the loud pedal and 707bhp is immediately sent to the rear wheels, the effect of that 650lb ft torque figure on the tarmac enough to erode the top layer of rubber and set off the smoke grenades under the rear wheel arches. 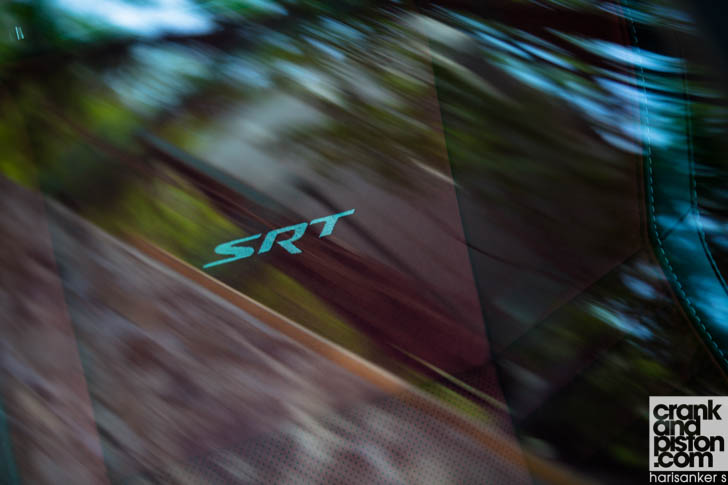 Ditch traction control altogether and the P-Zeros wilt into surrender, the resultant white smoke enough to inaugurate the next four generations of pope. And yet, even despite this savagery and with armfuls of opposite lock, the rear wheels do not twitch or threaten to spit you into the undergrowth with as much dedication as the V8 seemingly intends. There’s a twitchiness, sure, but little interference from the updated electronic power steering makes catching a slide remarkably straightforward. They don’t need much persuading though so don’t get too cocky: give it a proper bootful under full lock and that earth-shattering soundtrack will be accompanied by your own rapidly uttered prayers for forgiveness.

So, its power is rivalled only by Boeing aircraft, the tyres can be melted with a flick of the right foot, and off the line, you could easily swap dimensions. The Hellcat is, no question, utterly, utterly brilliant. And, as I’ve already mentioned, completely insane. Think about it: 707bhp, for a strictly land-based form of transportation. You could be forgiven for thinking both Dodge and SRT had gone off their respective rockers when development of the Hellcat got underway. 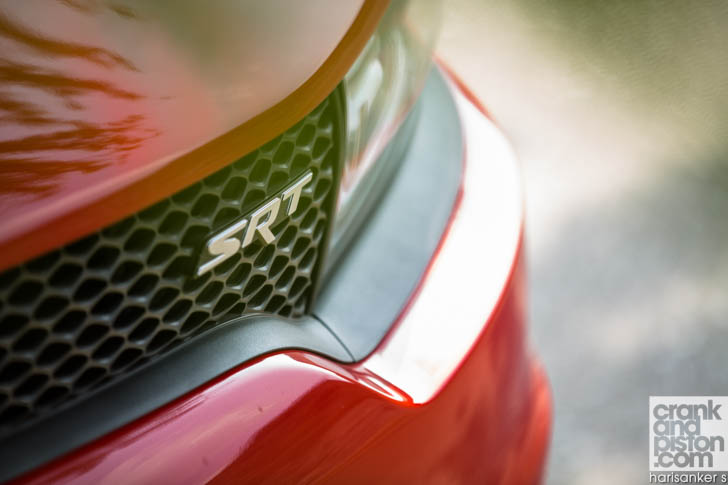 Saying that, ratchet the ferocity back a degree or two and you’ll find there is much more to the Charger Hellcat – regardless of keyfob – than a big shouty engine and whiplash. Fine quality materials make up a surprisingly civilized cabin, give or take the occasional niggle, the looks are the finest Dodge currently offers across its range, the handling – though still a little distant – is well-balanced, the retuned suspension is just soft enough to take the edge off the more rutted surfaces, the V8 engine note could be a legitimate ring tone, and astonishingly, even the combined fuel consumption is reasonable. With each key, you unlock very different characters, the black key’s Dr Jekyll to the red’s Mr Hyde. While the focus of fans and customers will forever surround THAT Hemi V8 and the performance that lingers within, the inevitable tyre smoke hides some serious potential.

If all that is of little consequence to you, consider this: for the price of a mid-sized saloon, you receive the type of power normally reserved for models with raging bulls on the front grille. And how can you not love that?