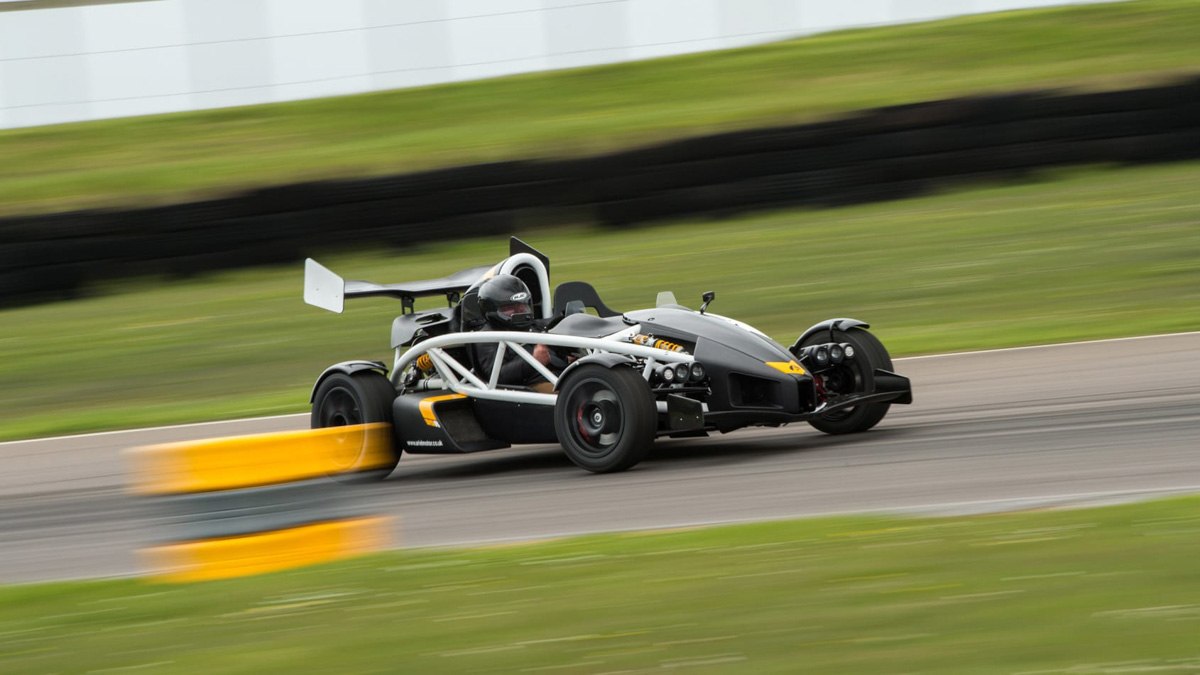 Driving a car that weighs not a lot – as in less than 650kg – but which boasts a seismic amount of power – ideally 300bhp or more – has always held a unique, if slightly unhinged form of appeal for the genuine rev-head. At times it can feel as if it is not you but the car itself that is in control. And in a curious kind of way that’s a rather wonderful thing to experience on four wheels every now and again.

But only if the car in question has been thoroughly engineered by people who really do know what they are on about. The perfect overpowered, lightweight, four-wheeled Exocet missile ideally needs a well-balanced, rear-wheel-drive chassis and pin-sharp steering without any form of power assistance. Most important of all, it should be equipped with a mighty set of brakes that can keep its potential to deliver mayhem firmly in check. What we have here are three of the very best exponents of this unusual breed of car, two of which you will be familiar with, one of which you may not.

The first two – the Caterham Seven 620R and Ariel Atom 3.5R – have been around for quite some time now and are clearly established as the go-to solutions for punters with a) a mild death wish, and b) at least $60k to spend on ultimate lightweight driving thrills.

The $67,800 Caterham has a supercharged 2-litre Ford Duratec engine in its nose with 310bhp and 219lb ft of torque, and puts its prodigious power on the road via a sequential six-speed gearbox. It weighs 572kg dry, boasts 551bhp per ton (also in ‘dry’ terms) and can, says Caterham, hit 96kph in just 2.79sec.

The $82,910 Atom 3.5R has just been replaced by the new Atom 4, but we still invited it along because, well, it’s one of those cars you can never really get enough of. It too is powered by a supercharged 2-litre engine, but this one is from Honda, not Ford, and is mounted behind the occupants and mated to a sequential six-speed ’box with pneumatically actuated paddleshifters. The 3.5R weighs 550kg with fluids and generates 350bhp, giving it an even more crazed power-to-weight ratio of 647bhp per ton. There’s also 243lb ft of torque, so the Ariel should be even more mighty than the Caterham for mid-range muscle.

Which just leaves the new boy in town to discuss, the Elemental Rp1. Designed and built by a team of ex-McLaren and ex-Ford engineers, the $178,870 Rp1 features a carbonfibre tub at its core and a driving position that is similar to that of an F1 car, reckons Elemental. This so-called ‘feet up’ design enhances the aerodynamic qualities of the car significantly, so they say, and helps the Rp1 generate a claimed 500kg of downforce at 241kph. Its 2.3-litre turbocharged Ford engine (there’s also a 2-litre option) sits behind the two hyper-raked seats and produces a maximum of 320bhp in its fruitiest mode – there are numerous boost levels to choose from – accompanied by 354lb ft. With a dry weight of 620kg, that means 524bhp per ton (dry).

Like the others, the Rp1 has no form of traction control or ESP, and no power steering either. So you are on your own when you select the wildest Race mode, especially in the car we’re testing today, which has had its engine boosted a touch further via a factory upgrade to 340bhp, just for extra carnage. That in turn takes the power-to-weight ratio of this particular car up to 557bhp per ton.

Driving cars such as these on the public road is undoubtedly fun, but by far the best place to get the most out of them is on a track. Hence we’ve brought all three to Anglesey Circuit to establish several different things. One, which is the most engaging to drive. Two, which is the least terrifying to drive hard. And three, which is quickest against the stopwatch.

I drive the Elemental first because it feels like the one that might need the most time to get the best out of, and I am right. Even just climbing aboard is not easy, but once you’re ensconced the driving position feels very single-seater, even though it isn’t. Your feet are roughly on a level with your chin, and for me there isn’t quite enough support to keep my head up, meaning I need to strain just to keep my eyes on the level. It’s almost there but not quite in terms of driving position, although having said that the pedals are perfect and the paddles on the steering wheel are spot-on, as is the wheel itself.

I try the Rp1 in its most basic Road setting first and the throttle feels a bit dead to begin with. Not so the acceleration, which is utterly ridiculous, even in this novice mode. Traction is also extraordinary, while the steering feels hyper-reactive, maybe too much to begin with, possibly because the owner of this example has fitted a quicker rack that has increased response but upped the weighting at the same time.

Either way, the Rp1, though astonishingly quick, doesn’t feel quite as sweet as I’d hope. It feels like a bit of a wrestling match to be honest, even though the level of grip it generates is impressive, its sequential gearbox works superbly and the acceleration on offer is eye-watering.

So I decide to try it in full beans mode, at which point the throttle response goes from so-so to stark raving mental, and the acceleration becomes simply too much for the rear tyres (Toyo Proxes R888Rs) to cope with out of most corners.

It’s a little bit insane how fast the Rp1 feels in this mode, and in a way that’s what cars like this should be all about. But the mapping needs work as it’s simply too aggressive. The torque arrives in such a rush it actually becomes quite a difficult car to drive smoothly. Or quickly. Eventually I manage to not spin the Rp1 to a Coastal Circuit lap time of 1:13.2 – 2.1sec faster than the Jaguar Project 8 lap you’ve just read about, 0.4sec behind a McLaren 675LT – and it feels entirely unhinged in the process. But the truth is it would go kilometres quicker with a less aggressive map yet still with the full 340bhp. I climb out of the Rp1 oscillating slightly, glad to still be in one piece.

By comparison the Caterham feels quite civilised. But, amazingly, it also doesn’t feel anything like as explosive in a straight line as the car I’ve just stepped out of, which is not something you find yourself saying about a 620R too often.

The sequential gearbox on this example is not at its best, causing the rear wheels to lock momentarily in the big stopping zones, which is not good. Yet there’s still something utterly addictive about ragging the 620R around a lap. The Seven’s steering remains a thing of wonder, too: so precise, so sharp, that you end up aiming it more with your mind than your hands. Plus the throttle response is fantastic.

With the gearbox hindering the lap time I clock a best of 1:14.2 – a full second behind the Elemental – but as with the  Rp1, it would go way quicker in perfect condition.

Which just leaves the Atom, which is 100 per cent healthy, and just very, very quick, full stop. From its light but super-direct steering, via its incredible blend of acceleration and traction, to its perfect throttle response, its immaculate brake response and power and, perhaps best of all, its awesome pneumatic paddleshift gearbox, the 3.5R feels in another league round Anglesey.

It’s almost as mind-scrambling as the Rp1 in a straight line but has more grip, much better traction and – most important of all – is much more forgiving on or near the limit. This means you can drive it right on the edge, everywhere, but somehow without scaring yourself, which ultimately means you can drive it harder and have more fun in the process.

In the end I do a 1:12.3 lap in the Atom – just two-tenths behind what we’ve recorded in a 911 GT2 RS and I don’t ever want to climb out of it. The Rp1 could learn a thing or two from the Ariel in this respect, even if it is – in theory – the more sophisticated of the two. And costs more than twice as much…