We’ve just finished a drag race between the Cadillac CTS-V and Dodge Charger SRT Hellcat – because combined they produce 1347bhp and, y’know, we’re childish idiots – and the CTS-V has won. And not by a margin. It’s a landslide.

And it’s thrown us completely. Okay, the CTS-V – the third of Cadillac’s decade old V-Series model range – boasts 640bhp and 630lb ft of torque from a 6.2-litre V8. The supercharger is from a Corvette Z06. Throw in a 1880kg kerb weight and the CTS-V has an impressive 340bhp/ton power-to-weight ratio. At full pelt, the V-Series will hit 320kph, having demolished 0-100kph in less than four seconds. So yeah, the credentials for a drag strip weapon are there.

But c’mon. This is the Charger Hellcat we’re talking about. Also boasting a 6.2-litre V8 (there’s only 4cc difference between them in the HEMI’s favour), the Charger kicks out 707bhp and 650lb ft of torque. It destroys a quarter mile in a little over 11 seconds. The monster is sold with two key fobs, one of which ‘limits’ the power to 500bhp to stop its occupants wrapping it around a lamppost. How in God’s name can it lose a drag race to an opponent, even one as formidable as the new Cadillac CTS-V? 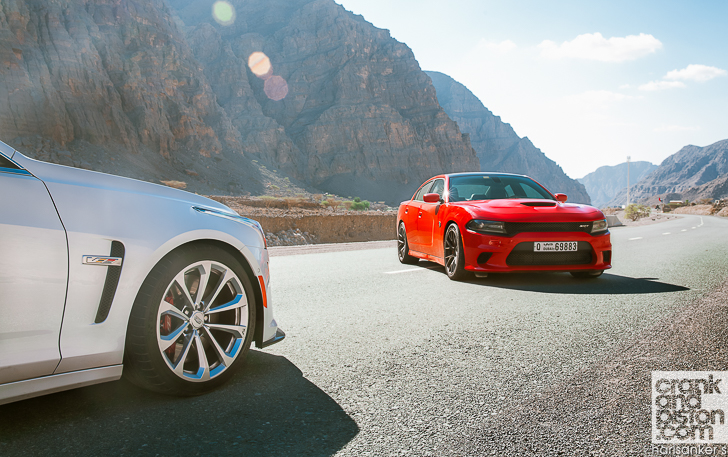 It’s a question I mull during the several drag races that follow (like I say, idiots) but the results speak for themselves. The CTS-V, after a little slip from the rear axle, finds traction quickly, power and torque combining for solid, perpetual pull thereafter. The Hellcat meanwhile immediately throws all it has at the rear tyres, which promptly squirrel sideways, only hooking up when into the mid-range of second gear, and only when both models are well past the 120kph mark does the Charger start to dig into the Caddy’s lead. It takes me a few runs, but I soon realise this precise albeit lunatically-powered approach of the CTS-V against the more theatrical power delivery of the Hellcat is an apt example of their
respective characters.

Purely from an aesthetic point of view, you may consider this odd. Both for instance include truly massive bonnet scoops, an entrance to an automotive Dante’s circle of damnation. They both feature beefed out wheel arches, slick cut glaring headlights, and more carbon fibre accenting than an Olympic bike frame. There are ‘SRT’ and ‘V’ badges for added badassery, and each was designed with ‘performance’ – and a crap-ton of it – in-mind.

Take a REALLY close look though. There is a difference. The Dodge embodies a stockier front end, larger alloy wheels, and ultimately, a far more muscular façade than the comparatively athletic CTS-V (even if the rear wing of the latter does beg to differ). Granted the CTS-V is a premium brand rival of the BMW M5 and the Charger a more ‘blue collar’ alternative to the Ford Mustang, but chances are the more flamboyant Hellcat will draw greater looks than the sleeker CTS-V. Such proves the case at most of the petrol stations and traffic signals we pull up at, plus – at one point – the police cruiser who mistakenly thought we were street racers. Even within our little group, the general consensus swings towards the Hellcat from a purely aesthetic perspective. 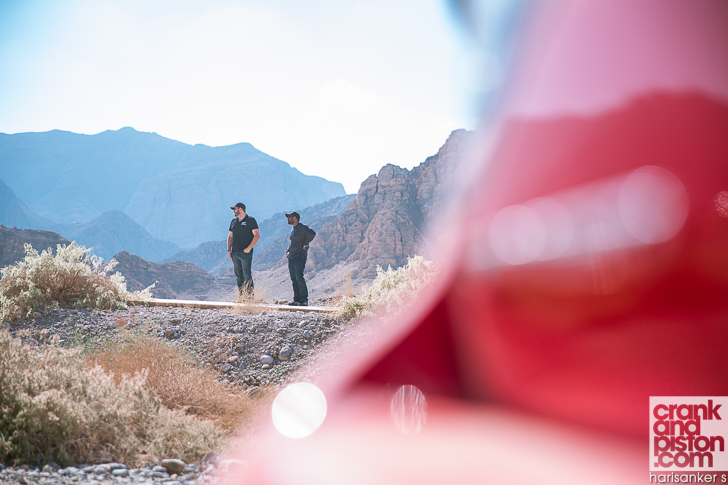 Taking up position in the CTS-V to begin with though, it’s not the looks and darting stares towards the Hellcat that strikes me. It’s the ride. Don’t get me wrong, the performance focused suspension – regardless of comfort setting – is stiff but superbly malleable during our highway jaunts: even the more rutted sections of tarmac we cross on our way into the mountains isn’t as jarring as one might expect from such a model. Nor even are my hackles spiked by the now slightly dated CUE system or the over the top carbon trim. Even with the Recaro sports seats, it’s an elegant look. And that would be all she wrote were it not for the intrusive nature of Cadillac’s driver assistance systems. These have rarely rankled with me, despite experience in the regular ATS and CTS models, but in the V-Series…I’m not sure if they’re more sensitive in a 640bhp performance saloon, but they quickly begin to get on my nerves. The lane departure ‘assist’ grates in particular: there are sections of our highway run where I feel like I’m genuinely fighting the steering. Thankfully this can be disabled.

Fortunately, as our slightly star-studded convoy (1347bhp really does draw a lot of attention) slopes off the highway and begins winding its way into the mountains, my rather fractious mood would improve. I’ll admit that, prior to today’s twin test, I didn’t have high hopes for either contender on probably the region’s most famous stretch of snaking tarmac, Jebel Jais. Though they had both been born for ‘performance’, surely at heart that insane amount of power was going to catch up and throw a spanner into the nutsack. Apparently not. 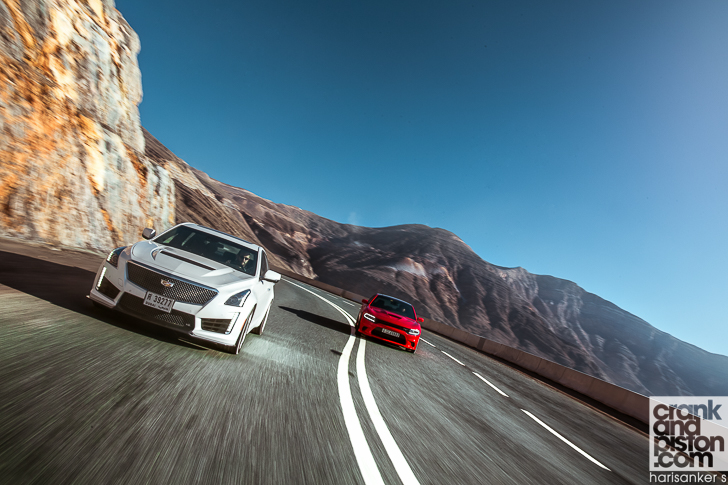 Let’s start with the CTS-V. In-house at Cadillac, it’s called ‘The Sledgehammer’. And yet through the corners, it drives with almost astonishing nimbleness. Perhaps not quite in the same bracket as its smaller V-Series sibling the ATS-V or even perhaps a BMW M5 (though we’ll have to wait for another day to find out), but there’s no denying the CTS-V’s capability through the turns. I’m keen not to stack $85K into the Armco some 25km away from the nearest service centre, and start the opening run in Sport mode, where – as is traditional – gear changes and throttle response become sharper and the suspension hunkers down for a beating. Through the opening high-speed sweepers the front end feels remarkably well composed, even despite the V8 lump balancing just behind the grille. There’s an enormous amount of grip from those 19in tyres granted, but even without that, there’s enough stability at the front under load that my confidence goes up almost immediately. There’s a modicum of bodyroll in the cabin but not enough for me to feel unnerved by the ever-rising speedometer needle. Indeed, thanks to those low mounted and superbly supportive Recaros and a low centre of gravity, it’s but a fleeting thought.

I’m a little perplexed. Even though I’ve already driven the CTS-V on track and am more than familiar with its capabilites, I had still expected that power output to mean a lairy rear end that required delicacy with the throttle pedal. And yet, though there is the occasional slip at the back when I go full beans on the pedal, the rears remain largely stable. Nor is the front end not being forced wide by 640bhp pushing the nose towards the rock face. It all feels very agile. So, should I switch to Track? Yeah. Yeah, I will.