Celebrating the last three decades of operations, Bugatti gathered all three of its flagship hypercars in Dubai 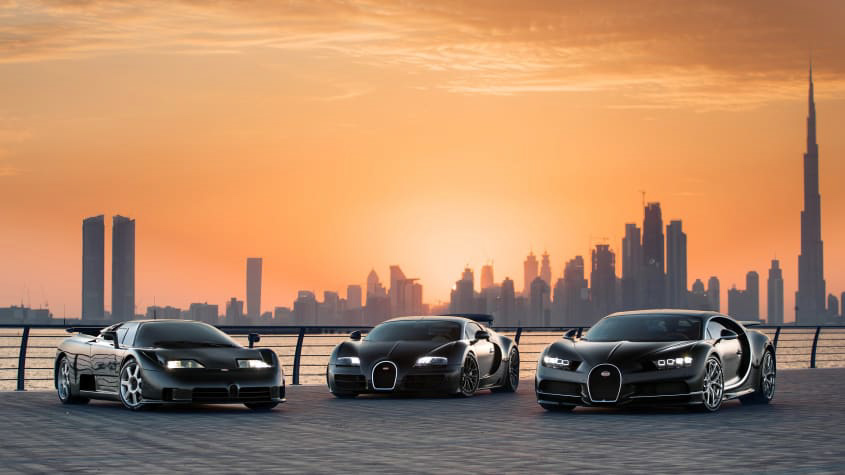 The current global situation is not easy for anyone, and so to act as a small dose of escapism, Bugatti has released a set of images from a photoshoot with all three of its modern day flagship machines. Spanning from the EB110 of the ‘90s, to the legendary Veyron, and through to the Chiron on sale today, this trio will have anyone gazing in awe.

Though developed ahead of Bugatti’s VAG acquisition, the EB110 marked the beginning of its modern day lineup, with it sharing more with current cars than some may realise. Featuring all-wheel-drive, four turbochargers and a carbonfibre monocoque, it boasted a number of firsts for the road car when it made its 1991 Paris motor show debut.

Being the very first production car constructed from carbonfibre, and featuring elements such as magnesium wheels and titanium bolts, it was the pinnacle of automotive technology. It had performance figures to match, too, with its 3.5-litre V12 providing a 3.3sec 0-100kph time and 350kph top speed – this made it the world’s fastest production car at the time.

Confirmed for production in 2001, six years after the last EB110 rolled out of the factory, the Veyron once again proved Bugatti’s ability to create record-breaking machines. Headline figures of 1000bhp and 922lb ft of torque were impressive enough, but its 408kph top speed granted it the title of world’s fastest production car.

Five years after the first standard car was delivered, Bugatti launched the Super Sport seen in these photos, with even more power and aerodynamic tweaks pushing it to a 431kph top speed, breaking its own production car top speed record.

As if this wasn’t good enough, along came the Chiron on sale today. Under the skin is similar powertrain to that found in the Veyron, but through a number of tweaks, power sits at a staggering 1479bhp and 1180lb ft of torque, good enough for a (limited) top speed of 420kph. More recently however, Bugatti took to its Ehra-Lessien test facility once again, recording a 490.3ph top speed in a modified variant of the Chiron, the Super Sport 482+.