On paper alone, the BMW’s 277bhp/ton power-to-weight figures do not make light reading for Munich, dropping as it does 32bhp/ton as well as a tenth on the drag to 100kph. But whilst ‘agility’ is a new approach for the C 63, it’s home turf for the near-100kg lighter M3, and while the Beemer does not offer quite the same emotive ferocity on either start-up or off the line as the Mercedes, it’s cornering capability is second to none.

Throttle response in Sport and Sport+ for instance is still knife-like as is steering response, inputs through the front end still intoxicatingly sharpness and offering greater clarity of feel than the C 63 thanks to exaggerated amounts of heft lock-to-lock. While the stiffened chassis may pick up the undulations of the road more intimately than the Merc – and produce a more jostling ride as a result, even in Comfort mode – where the greater damper and suspension setup really shines is through the more stiffly sprung Sport mode, where lean and understeer are mere figments of the imagination and the composure under turn-in is sublime, bettering the C 63 despite the Mercedes’ commendable efforts. There is still the occasional twitch from the rear wheels although this rarely unsettles the balance, the BMW already re-composed and back on the power almost matter-of-factly.

“Whilst ‘agility’ is a new approach for the Mercedes-AMG C 63 S, it’s home turf for the near-100kg lighter BMW M3”

Should lift-off oversteer be your cup of Darjeeling, the M3 does have its braying tendencies when really on it. Fortunately, given the bucketfuls of feel through the steering, they’re wonderfully easy to catch at pace. At the front, strong traction and solid front-end bite into the corners really encourages you to make that 425bhp work to greater effect than in the C 63 (though admittedly the Merc has greater output to work with). There’s also, rather oddly, a heightened sense of aggression in this instance in the BMW, both ends biting yet further into the tarmac when you really grow some plums, requiring more commitment but ultimately producing a more rewarding run through the turns. The drama is probably more electric in the Mercedes, given that bite of inertia from the V8 and the accompanying soundtrack that goes with it, but the M3 still leads the way in terms of good old-fashioned cornering ability. 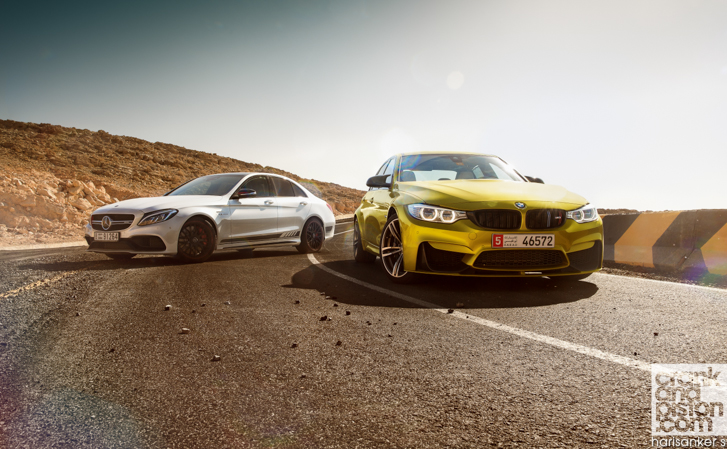 So, stalemate? Not quite. That the Mercedes C 63 is a more refined animal than we’ve come to expect from Affalterbach could, to purists, come as something of a disappointment. Having said that, more power than ever before – plus arguably a more intoxicating V8 rumble – and greater precision in which to get that rampant power down could hardly be considered negative, the drama and excitement of the drive still very AMG-like in its process. That being said, greater amounts of composure, agility and rate of response through the steering – plus a more engaging driving experience – mean it’s difficult not to side with the BMW on this occasion. It’s a tough call though, and arguably the M3 and the C 63 S have never been closer (we doubt you’ll be dissatisfied with either). On the right winding stretches though, you’ll want to find yourself in the M3, but only just.

But how does the Cadillac ATS-V compare? Stay tuned…