With its new C 63 S, Mercedes-AMG may finally have the artillery it needs to bring down the might of the BMW M3. But who ultimately takes the top spot?

The battle for supremacy between BMW M and Mercedes-AMG is one of time immemorial: cast your minds back to the E30 and the 190E, and you’ll find not only two poster childs for mid-80s performance saloons, but also a near-three-decade-long pattern of extraordinary powerplants and shoehorned heavy-hitting firepower. So when the newest generation C 63 AMG arrived this year, following the unveil of its deadliest rival nearly two years earlier, the fight was on. Albeit one of a slightly different ilk.

Gone for instance are the flame-spitting, 8000rpm revving naturally aspirated monsters of yore in place of – urgh! – more fuel efficient, downsized turbocharged units. But whilst many had already begun mourning the apparent end to the BMW-Mercedes arms race, hope sprung anew with the promise of increased torque, power, and – ultimately – greater performance. And in this regard neither company has disappointed.

Having said that, the ‘Hot V’ twin-turbo engine in our C 63 S test model today stands head and shoulders above the M TwinPower straight-six in terms of out of and out grunt, offering as it does 503bhp and 516lb ft of torque for a solid 0-100kph time of four seconds dead. It’s a reasonable 34bhp and 37lb ft above the base level C 63, and a considerable 78bhp and 110lb ft above the BMW. Indeed, to get the M3 on levels terms would require the 552bhp straight-six from the M5. Certainly puts Mercedes’ phenomenal power advantage into perspective, doesn’t it?

Top trumped in terms of power, the BMW must also play second fiddle to the C 63 S when it comes to sound. Oh certainly, on start-up the straight-six is purposeful enough albeit at the same time a little industrial. There is not for instance the same rampant, emotive boom as produced by the C 63’s V8. Any concerns that a downsized unit would emit a softer, altogether less immediate battle cry can be put well out of your mind: pull the pin, and the Merc’s beating heart sounds truly magnificent. 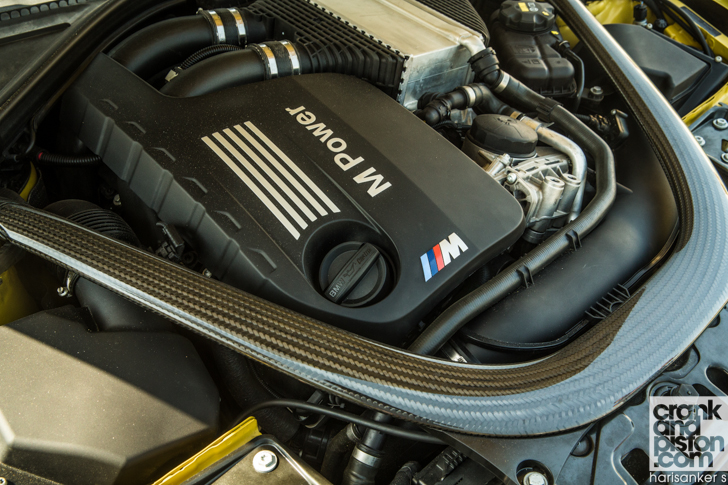 Where things do slightly begin to stray out of the Mercedes’ camp is the looks. The M3 for instance – all chiselled bonnet louvres, front bumper and rear splitter as it is – is sharp and aggressive in terms of both stance and styling. It’s a menacing look, one complete with some cheeky M-spec 19in alloys and a quartet of tailpipes jutting from the rear valance. You are left in no doubt that the animal before you is an ‘M’ car. By comparison, AMG’s usual ferocity has been somewhat muted on the C 63, the latter angled and pinched at the front granted (helped in no small part by the twin ‘power domes’), but a little staid and underwhelming at the rear, despite a squat stance and formidable looking 19in dual spokes. It’s not an ugly car, but at the same time doesn’t offer the toned physique the artillery under its bonnet would suggest. Even the number of ‘M’ and ‘AMG’ badges on the exterior suggest a certain amount of role reversal: while the BMW has 14, the Mercedes has only 12. That the AMG would be ‘out-blinged’ by an M3 I don’t think any of us had expected.

On the inside meanwhile, it’s business-as-Mercedes-usual, the sweeping dashboard design and minimalist centre console we applauded so heartily in the new C-Class now AMG-ed with bucket seats, chrome trim and some roguish red stitching: it’s a more exaggerated setup than the rather more ‘executive’ look we find in the M3, even with the latter’s blue stitching and pseudo-racing buckets. What perhaps swings favour towards the M3 however is its more cossetting cabin design, slightly more intuitive infotainment system controls (why Mercedes needs both a touchscreen ‘grab handle’ and a rotary dial for the system I’ve yet to fathom), and more comfortable seats: the C63’s wider damper setup may offer a more supple ride comfort, but during our long haul test the super-stiff bucket seat proved unmerciful to the small of my back. 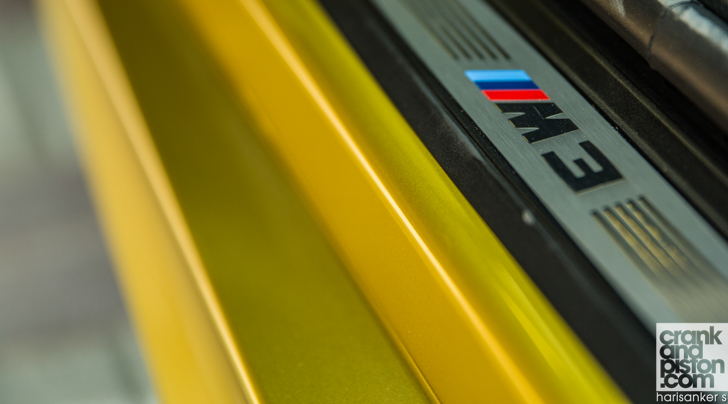 At pace though and on one of our preferred stretches of driving road just outside Fujairah, first impressions of the AMG are favourable. In the past we’ve grown used to AMG machines being about as subtle as a bazooka, even if the titanic power at play was fantastically exciting to wrestle. With the new generation though, and with significant changes made to the chassis and suspension, everything feels much tighter, consequently offering more control than we’ve experienced hitherto. Changes through the seven-speed MCT Speedshift automatic are as crisp as ever, the ‘ker-chunk’ feel as each cog is slotted home a little more emotive than the BMW’s admittedly sharp seven-speed dual-clutch alternative. Steering meanwhile is amazingly quick though not so much to alienate driver input, and while pliancy in Comfort mode makes for a superb ride quality, ramped up there’s more than enough tension to let the Merc work its magic through even the tighter turns. Once again, it inspires a confidence to place the front end more precisely that we’ve grown used to with the C 63, not that traditions of the breed don’t raise their noggins every so often of course. The brakes for one: a little more progression in the pedal wouldn’t go amiss, though in fairness, this is something that give or take a corner or two, we can easily adapt to. Even still, greater travel in the BMW pedal and less tendency to snatch make Munich’s option more endearing.

“We’ve grown used to AMG machines being about as subtle as a bazooka, even if the titanic power at play was fantastically exciting to wrestle”

Then there’s that biturbo V8, for the manner in which 1655kg is thrown at the horizon borders on lunatic. The hearty soundtrack is taken to another level altogether as 503bhp of furious power is unleashed, thanks notably to torque being made available from below 2000rpm. Here again though, there lies a difference to the old generation, revisions to the ECU meaning that a bootful from standstill will not see the traction control squeal with contempt nor the rear tyres bonfire themselves to ashes. Find the balance and a thin trail of rubber will be left in your wake without the car snapping like a rabid dog. In top drawer ‘raucous’ mode then the C 63 S is a superbly enthralling experience, though some fine-tuning beneath the surface means there’s a wonderful sense of agility and composure to accompany the fireworks. Not what we had expected from an ‘AMG’, even one born with the same heart as the scalpel-like AMG GT. No question the BMW has a considerable opponent today…