Having put both the BMW M3 and the Mercedes-AMG C 63 S to the test on home turf, we find out if the first-ever Cadillac ATS-V can take up the fight with a few laps around the Yas Marina Circuit

So, as I wend my way to the Yas Marina Circuit for a run in the new Cadillac ATS-V, the gauntlet has been thrown down. And as we’d expected from both M-Division and Affalterbach, it’s a chuffing enormous one. Certainly one that, even with ten years of nuclear-powered V-Series performance to fall back on, Cadillac will surely have difficulty matching, let alone bettering. While the CTS-V’s ballistic power delivery made it a segment favourite across two generations and success on-track with the CTS-V.R racer underlined its performance capabilities, Cadillac’s V-Series has rarely demonstrated the deftness of touch so indicative of the M3, or indeed the C 63 in its current guise. To expect an upset today from the American underdog would surely be hedging some seriously stacked bets…

To tar the first gen ATS-V with the same loud brush as its elder CTS-V sibling though would not do the newboy justice, so says Tony Roma (Cadillac’s chief engineer, not the steakhouse bloke). Indeed, though cast from similar moulds, their two characters could hardly be more diverse. While the 631bhp CTS-V has been dubbed ‘The Sledgehammer’ on account of its brutal acceleration, the ATS-V is referred to in-house as ‘The Scalpel’ given its more precise handling capabilities. While the CTS-V continues to use Cadillac’s rather dated 6.2-litre V8, the ATS-V houses a lighter-weight 3.6-litre V6 that can be mounted both lower and further back on the wheelbase than the V8 for better weight distribution. Since “turbo lag is the enemy”, the V6 is also mated with dual turbochargers for more linear, rather than abrupt, acceleration. 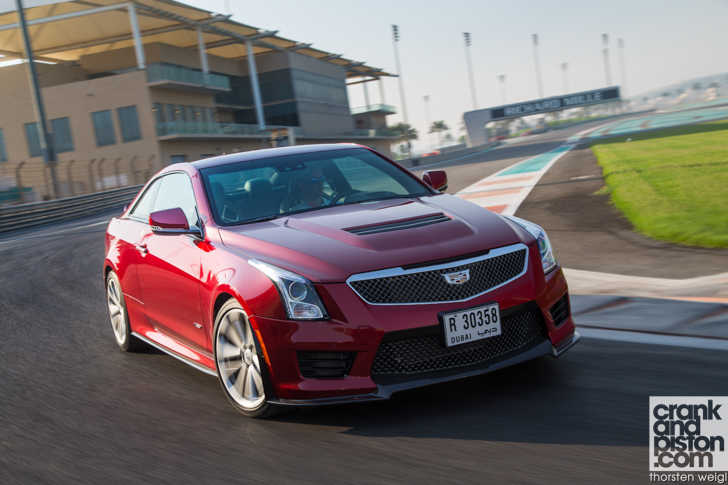 Away from the drivetrain, it’s a similar story. The chassis is now 25 per cent more rigid than its base model to allow greater loads under cornering. Similarly the MacPherson suspension has been stiffened for improved road/track holding, ditto the third generation Magnetic Ride Control system which reads the asphalt up to 1000 times every second. The lightweight aluminium wheels are now shod with Michelin Pilot Super Sport tyres, both of which are unique to the V-Series. This then is not some souped up marketing tool to help bring in a few extra quid – as Tony cheekily mentions, “we’re not in the Hellcat business” – and though the aggressive looking ATS-V may look the startled cat’s meow, the body panels have been reworked extensively for the sake of improved aerodynamics. That whopping front grille and air scoop are designed to draw more air to the V6 beneath, the tail lip rear spoiler adds more downforce at the rear, and the new front splitter helps bury those front 19in alloys yet further into the asphalt. The design brief at the easel most definitely favoured function over form, a raison d’etre we’re now going to test on-track.

“The gauntlet has been thrown down. And as we’d expected from both BMW M and Mercedes-AMG, it’s a chuffing enormous one”

Our runs this afternoon take place on Yas’ south circuit, a tighter and altogether more complex layout designed to challenge a car’s handling rather than the strength of its lungs. Though this, as I quickly discover after giving the Cadillac a bootful out of the pits, is hardly an arena where the ATS-V struggles. The 3.6-litre TwinTurbo V6 produces a sizable 464bhp and 444lb ft of torque, slotting the ATS-V neatly between the 503bhp Mercedes and the 425bhp BMW with 39bhp of wiggle room either side. Seamless shifts from the eight-speed automatic mean acceleration is both strong and wonderfully progressive: yep, no turbo lag there. Indeed, despite weighing more than both the BMW and the Mercedes, the Cadillac is the only one of our trio that dips below the four-second mark on its way to 100kph. 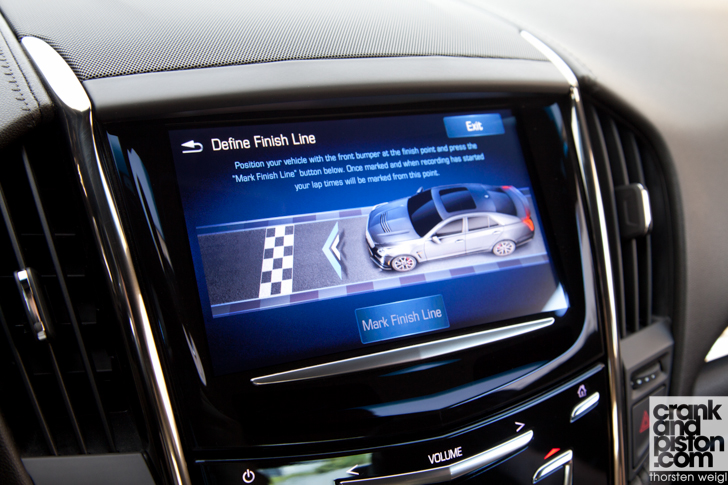 Where the ATS-V does fall slightly flat compared to its German rivals though, and in particular the AMG, is the excitement with which these phenomenal bursts of speed are put down. The low V6 rumble emanating from the exhaust pipes is a pleasant one certainly, but it lacks the same booming character of the AMG’s biturbo V8, and while the Cadillac’s progressive acceleration is tough to critique, it does also feel a little matter-of-fact: several times during my opening tours, I plough headlong into the redline on the main straight, caught completely off-guard as I am by both the linear acceleration and the limited sensation of speed this brings.

Fortunately the ATS-V’s nimbleness through the corners more than makes up for this slightly dispiriting performance. Into the tight and twisting left-right-left opening chicane, turn-in bite from the front wheels is magnificent, the Michelin Pilot Super Sports digging furiously into the turn to erode all sense of understeer. Clever weight distribution also that means the rear wheels, rather than pendulum-ing in my mirrors as 1678kg propels itself towards the front axle, also stick to the line, the ATS-V demonstrating a superb sense of composure upon diving into the corners. A low centre of gravity reduces body roll in the cabin too, ably helped by the tautened MacPherson suspension. Impressive enough through the tighter corners, there’s also superb balance through the high-speed sweepers, the ATS-V rarely unsettled as the speed begins to mount.

“The TwinTurbo V6 produces a sizable 464bhp, slotting the ATS-V neatly between the 503bhp Mercedes and the 425bhp BMW with 39bhp of wiggle room either side”

The updated Performance Traction Management had been a point of contention during the initial driver’s briefing, Cadillac assuring us that the setup in top drawer ‘Race’ mode leant itself to spirited driving without interfering overtly whilst we in turn worried that technical nunnery could bollocks our run completely. Happily, the system is rarely a factor, only activating ‘what is this moron doing?’ mode when I accidentally carry too much speed into the tricky off-camber turn three (encouraged, once again, by the limited sensation of speed as well as my own ineptitude). Consequently the rears, though grippy and magnificently well-balanced through the turns, can get a little twitchy – BMW-like – out of the apex when jumping on the power too early (there’s really too much grip for overt lift-off-oversteer unless you’re seriously committed). 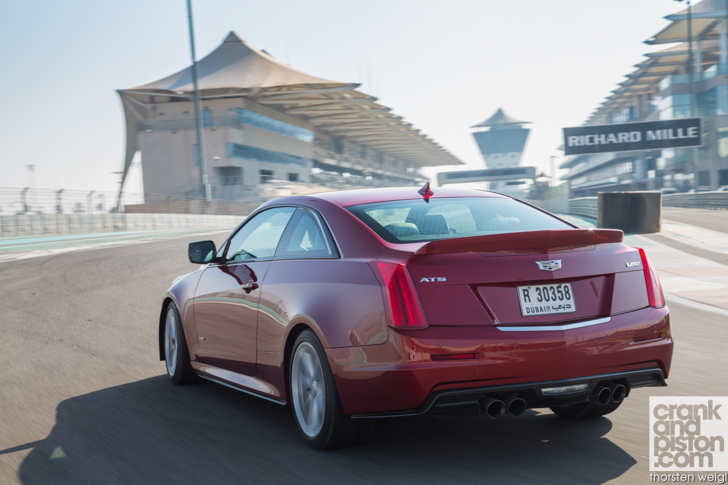 In terms of the brakes, it’s difficult to offer an objective appraisal given the emergency stop-start nature of track driving. Having said that, when entering the pitlane after a cool down lap, there is less immediacy than we found in the AMG pedal, and an impressive amount of stamina: using steel where its rivals use carbon ceramic, the ATS-V’s discs still offer formidable stopping power and remarkably little fade, even after several pad-bashing laps in anger.

Where perhaps the Cadillac’s superb handling does fade slightly compared with the M3 though is through the steering, packing as it does enormous heft lock-to-lock but still lacking the same connection for the front end and, as a result, the same intoxicating sense of engagement. The setup is superbly weighted don’t get me wrong, and the balance through the turns offering enormous confidence to really push that front end hard. Compared with the BMW though there is still a little distance to proceedings, and the same engagement isn’t quite there.

So, how close does the ATS-V get? Has America genuinely produced a car that can out-handle a BMW M3 or Mercedes-AMG C 63 S? 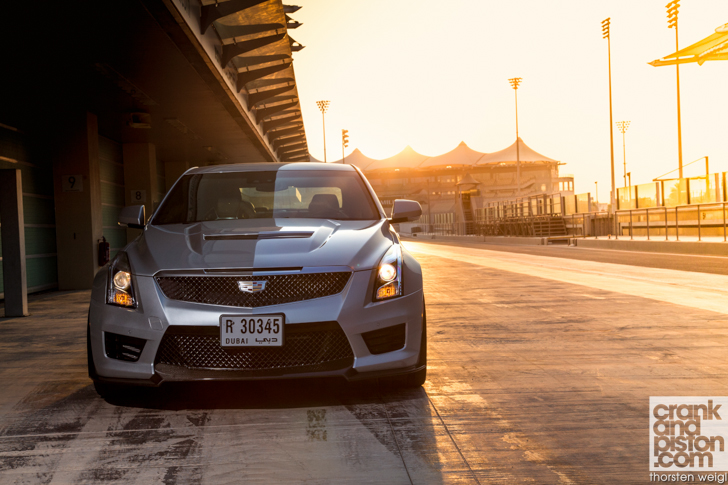 Not quite. It’s tempting to let the drama of a track event cloud my better judgement, and I must say the ATS-V’s ability through the turns have proven perhaps the biggest surprise of the day, even including that enigmatic AMG soundtrack. A low centre of gravity and the balance this creates means superb composure through the turns, a balance that’s not unsettled by linear – albeit very fast – acceleration from that V6, a far cry from the V-Series hammer blows we’ve come to expect in the past. A lack of aggression through the steering and the smooth feedback this provides offers good feel for the front end, and I’m still wondering how the brakes can take that much punishment without getting weary. It’s close, it’s very, very close, but alas the ATS-V doesn’t quite top either the M3 or the C 63 S, the innate sense of poise and engagement by the one and the heart-plucking emotion of the other leaving the winner’s garland just out of reach.

BMW and Mercedes then can breathe a sigh of relief after today’s test. They should bear in mind though that with the Cadillac ATS-V today we have seen genesis. And given the serious potential that lies within, that should leave them very worried for the future.