This year the brand new Cadillac ATS-V takes on the BMW M3 and Mercedes-AMG C 63 S. And in an unorthodox group test, we find out how the newboy handles the challenge

Today’s press event started much like any other: the crankandpiston.com team fighting through traffic, satnav working overtime and phone calls barrelling back and forth to make sure we get to our pre-arranged location on-time, cursing that once again, time has not been on our side, and what little there was has slipped through our grasp. And – honest – it’s not because we haven’t been paying attention.

Having abandoned the duck down revoltingly early to pit the BMW M3 against the brand new Mercedes-AMG C 63 S on one of our favourite stretches of driving turf in Fujairah, we’re now making our way nearly 300km to the Park Hyatt Hotel on Saadiyat Island, where Cadillac has kindly granted us 30 minutes to shoot both saloons alongside the segment rivalling Cadillac ATS-V, the launch event for which starts shortly after. 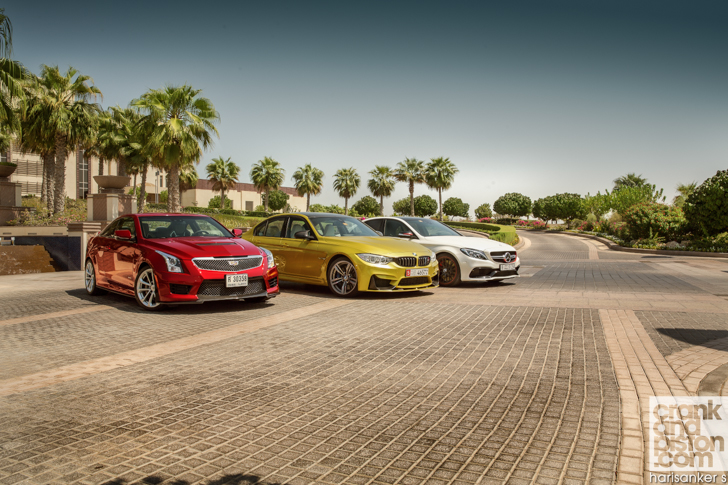 But as with most well-laid plans there’s been a shift in the schedule, and our allotted slot has now been pushed forward nearly an hour by Cadillac to make sure the event itself runs smoothly. You can hardly blame them: just 20 minutes after our shoot is in the bag our first run in the ATS-V on-track is due to kick off, after which we hope to find out how the new Cadillac really stacks up against both the BMW and the Mercedes in this admittedly unorthodox group test.

It’s an intriguing proposition: while the BMW M3 and the Mercedes C 63 S have been parrying and thrusting for mid-sized performance saloon honours for generations (and established a significant fan base in the process), this is brand new territory for Cadillac, the ATS-V its first such model to enter the category and its first V-Series model since production on the second gen CTS-V hit the bricks (though the new model will arrive before the end of the year). Does the American underdog really have what it takes against its more established rivals?

Quite a lot of swearing later, our convoy tyre squeals into the Park Hyatt parking lot much to the chagrin of the security team. We’re already 10 minutes past our scheduled shooting window as the keys to an ATS-V coupe are thrown our way (the saloon is currently being borrowed by one of the film crews). It’s a situation not helped, it must be said, by the attention our performance trio has drawn from both hotel guests and the media reps who have turned up early for the event: the new ATS-V, aggressive yet conservative; the M3, all muscle and sinew; the C 63 S, refined and oddly subtle. They really do make quite a spectacle. 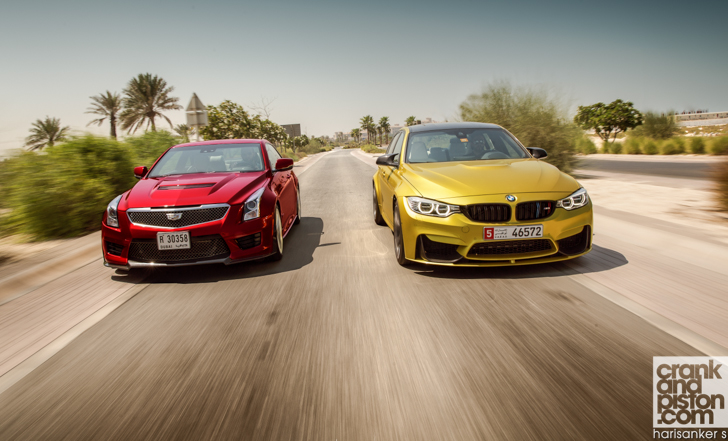 Focus today though is performance, pure and simple. While we do get an impression of the ATS-V’s road going civility as we manoeuvre the cars around (and we’re even allowed a quick blip on the road in front of the hotel for some context), it’s not quite enough to warrant a balanced opinion. That comes later. Today, we’re here to find out whether the BMW M3 or the Mercedes-AMG C 63 S tops the mid-sized performance mountain, or whether the Cadillac ATS-V can spring a shock result. And with that in mind, you join us in Fujairah, early morning…