crankandpiston.com welcomes the new Audi TT to The Management Fleet

Taut. Muscular. Aggressive? Hard to believe this is the same ‘sportscar’ that, for the best part of a decade, was more closely tied to the male fashion industry than the Nürburgring. Or that, given it came out the same year as the original TT, that Prodigy’s Fat of the Land is already 15 years old.

Clearly Audi was growing pretty fed up of this only-for-white-loafers reputation too, hence the clean sheet redesign for generation three. And top of the list obviously was the looks. Gone for instance is the cutesy curvaceous bodywork in favour of sleeker headlights, sharper bodylines and wider wheel arches (although the TT traditional fuel filler cap remains). Peal back the R8-esque bodywork – we doubt that’s a coincidence – and we find Audi’s new MQB platform, the underpinnings of sister company Volkswagen’s Golf R. Though almost identical in length to the outgoing TT, shorter overhangs and a wheelbase 37mm longer mean on-road manoeuvrability ‘should’ – let’s not jump the gun – be an improvement. 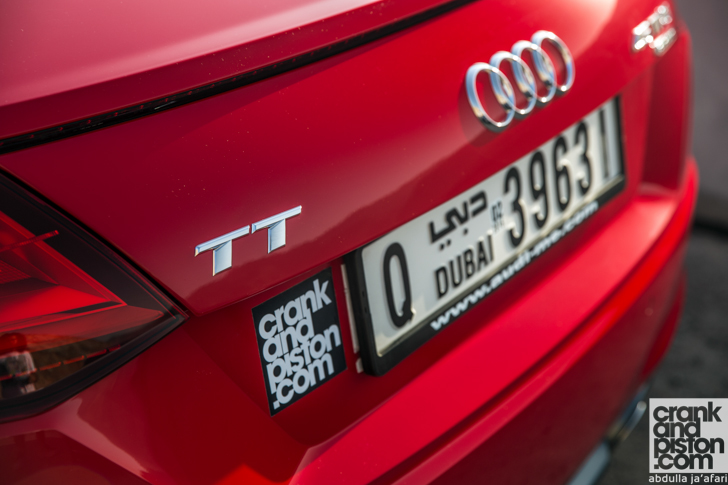 The changing of the automotive guard is not purely cosmetic. Under the ripped bonnet lies a 2-litre TFSI four-cylinder capable of 230bhp. Yep, good spot, the Quattro badges across the…

…across the dashboard and right buttock mark a newly developed all-wheel drive system, and – new for the TT – Torque Vectoring. The system is designed to send a percentage of that 273lb ft of torque to the rear wheels axle to optimise grip at the front under sharp turn-in and press the rear wheels into the corner. That might also account for the 250kph top speed and 0-100kph in just under six seconds. Further technical improvements include reconfigured MacPherson suspension for greater road holding – hang on, wasn’t The Divine Comedy’s Fin de Siécle released in ’98 too? – and a new evolution of Audi’s lightweight space frame chassis (the TT weighs only 1260kg),

On the inside, highlights include new sports seats, a fully designed – and pretty sharp-looking – dashboard, a newly designed Multi-Media Interface, and a Bang & Olufsen surround sound system. Oh, and something called the Audi Virtual Cockpit, which should hopefully keep us entertained for the next few months.

There was also Godzilla ‘98. But we don’t need to go into that.