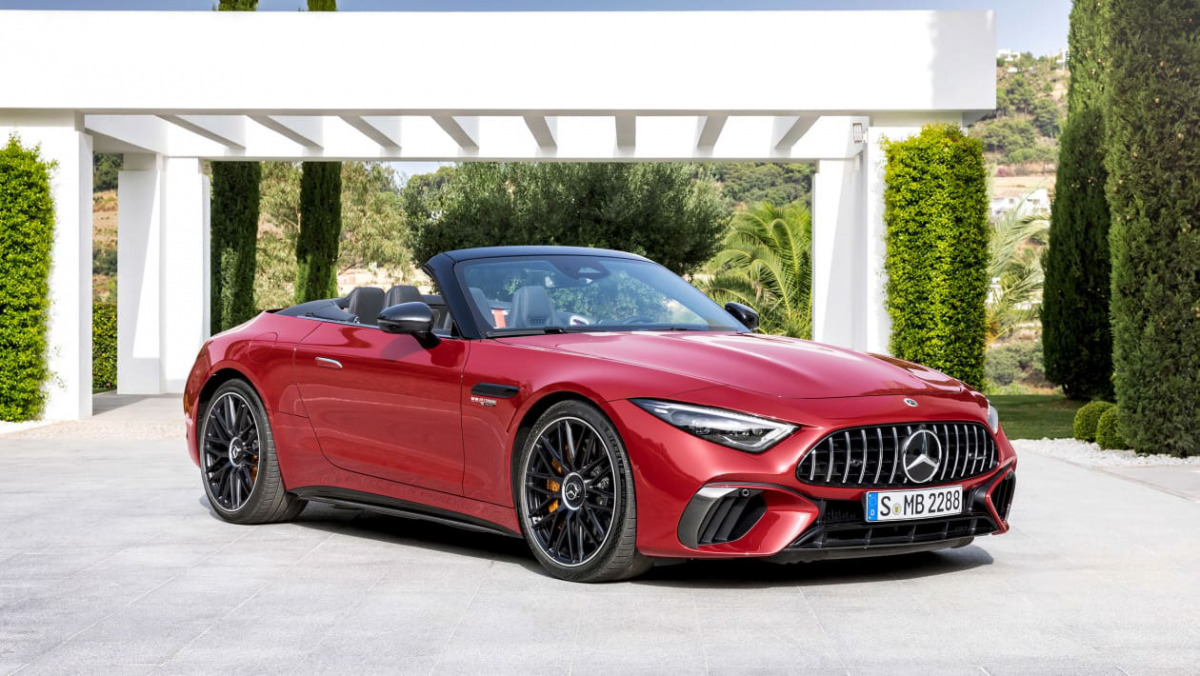 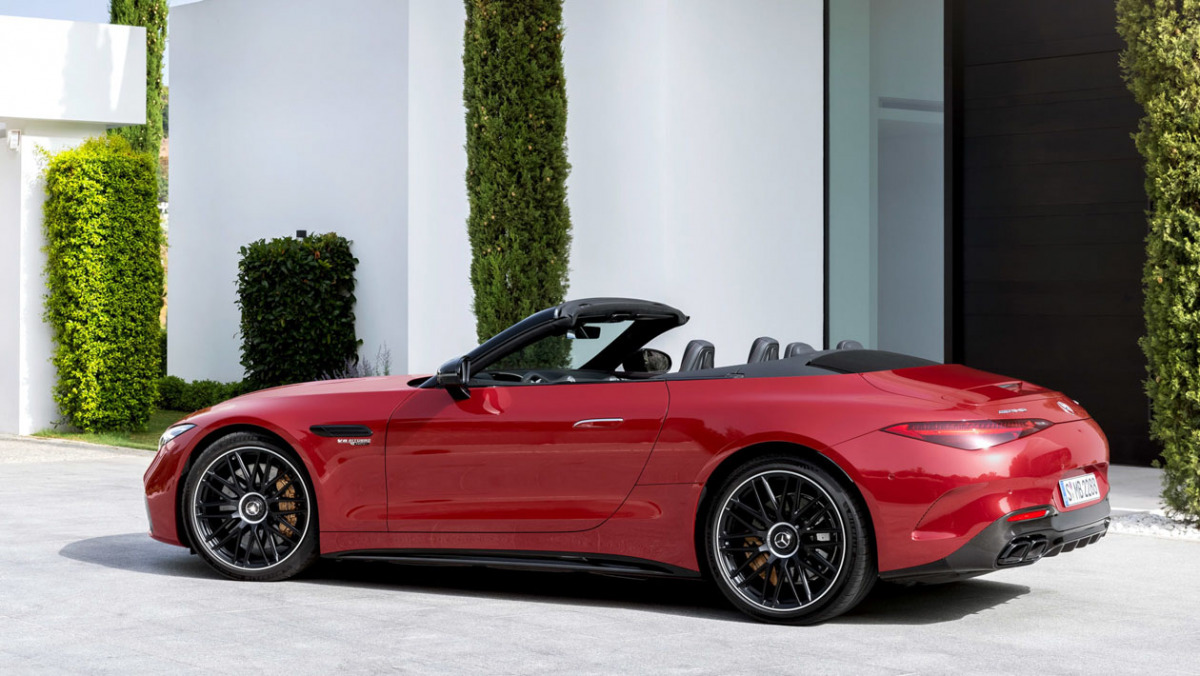 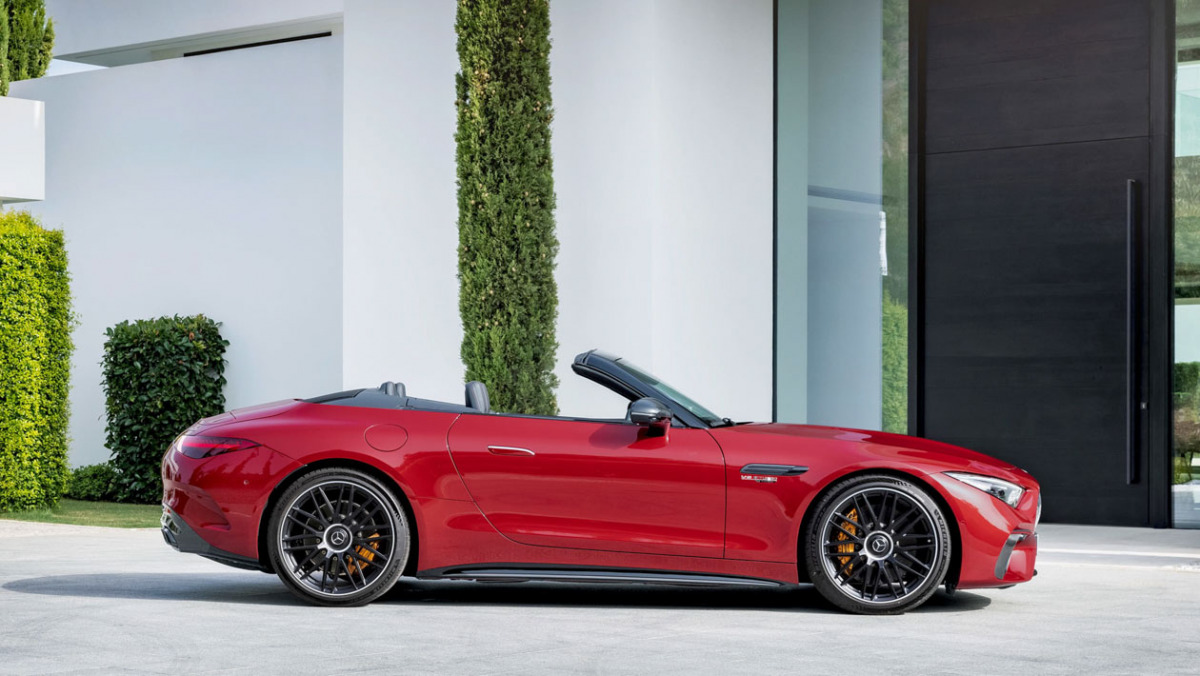 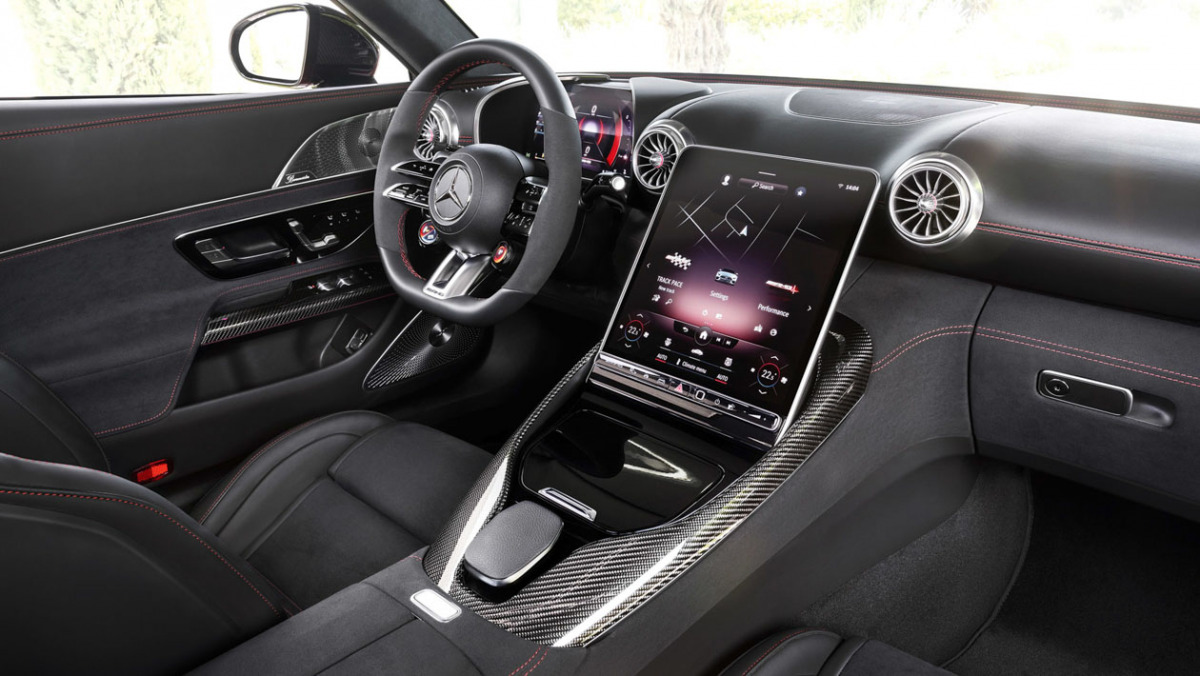 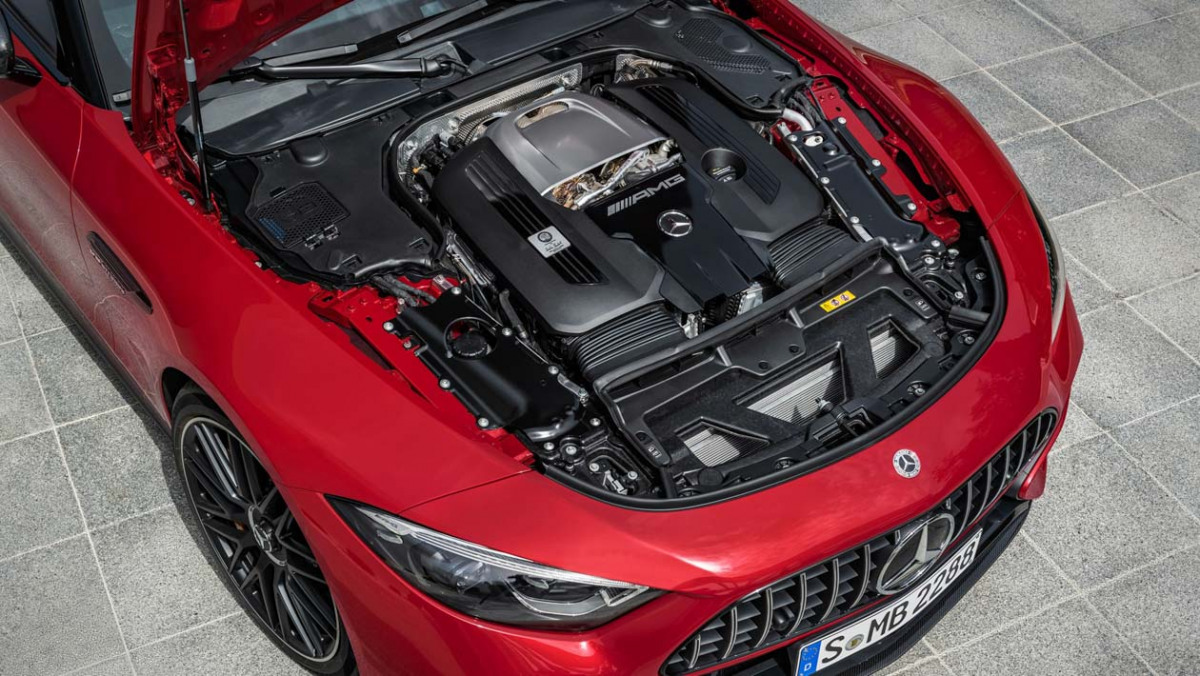 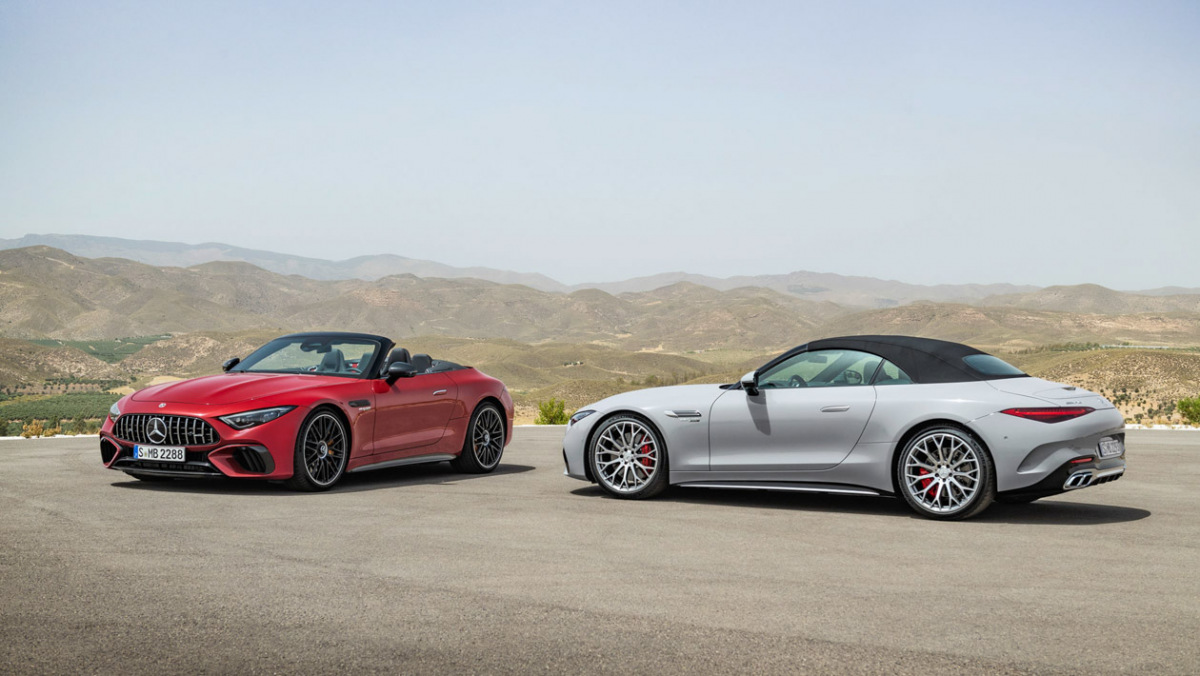 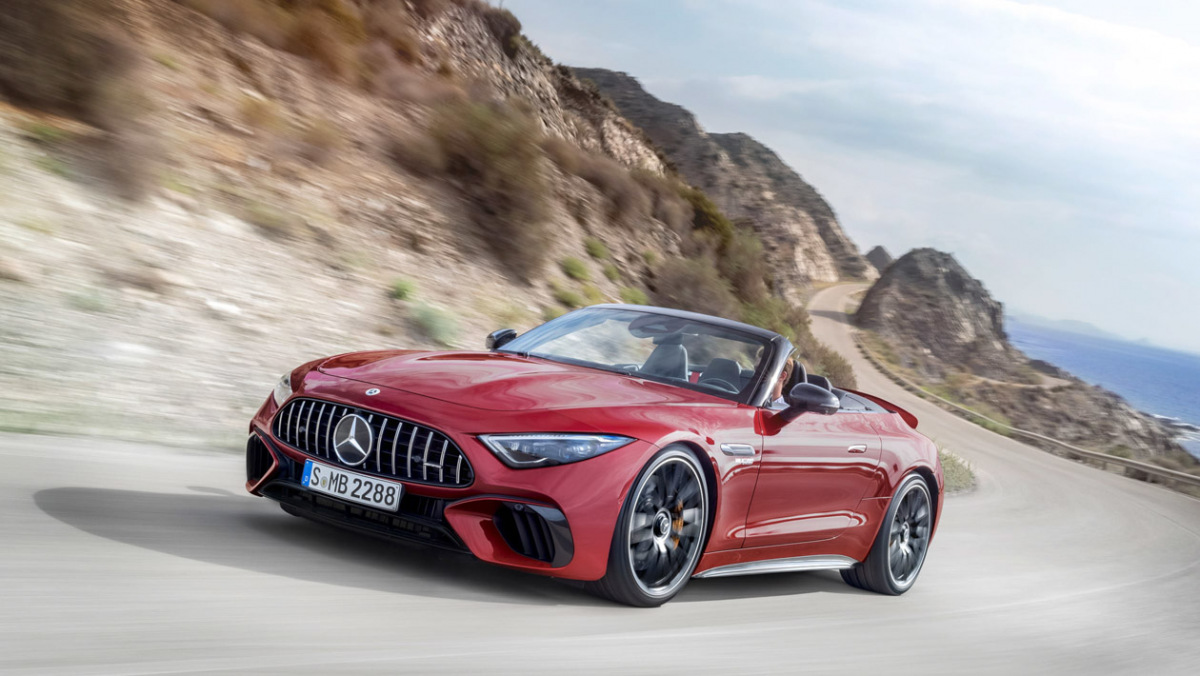 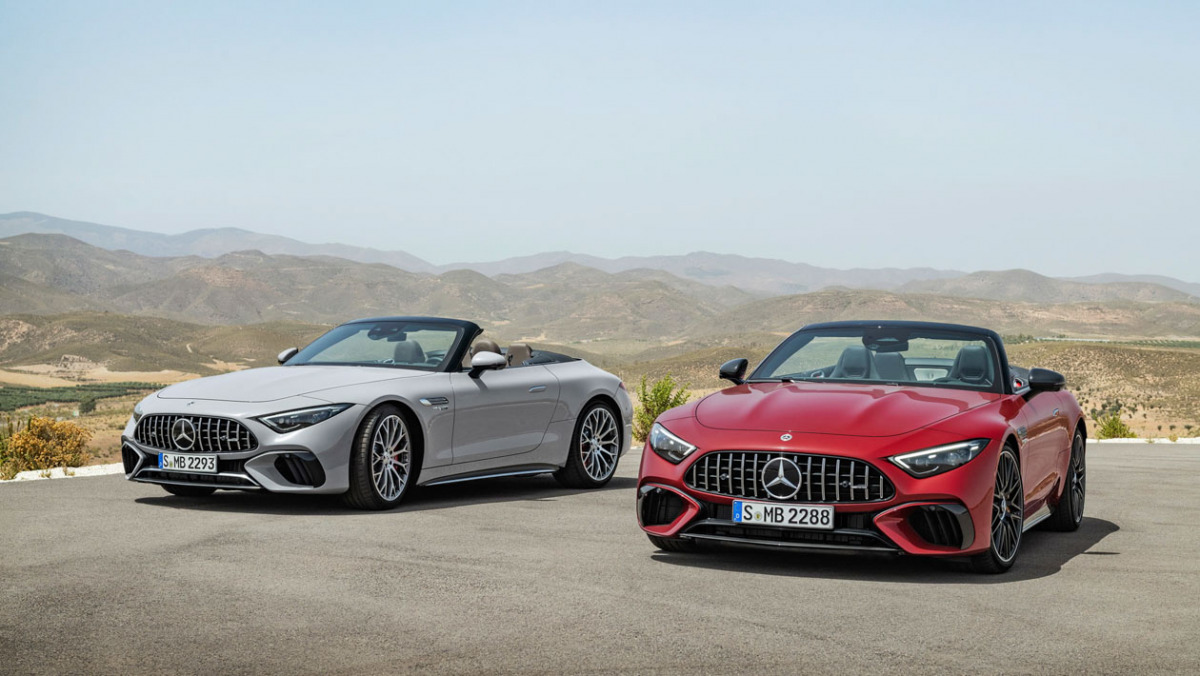 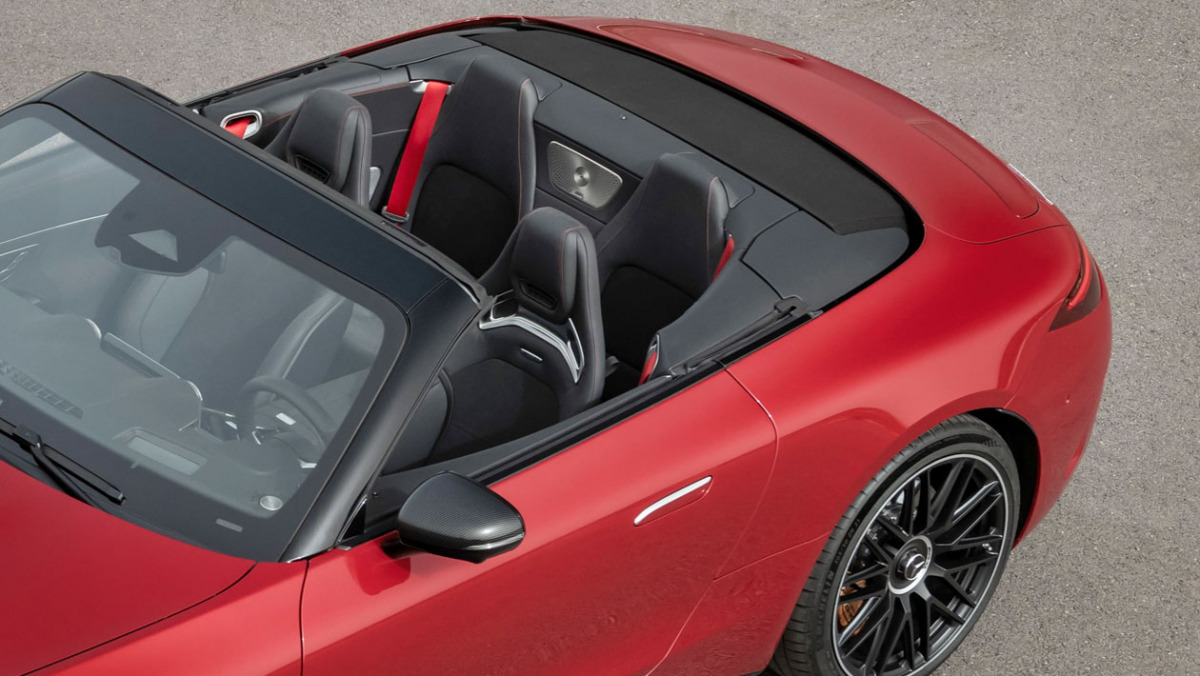 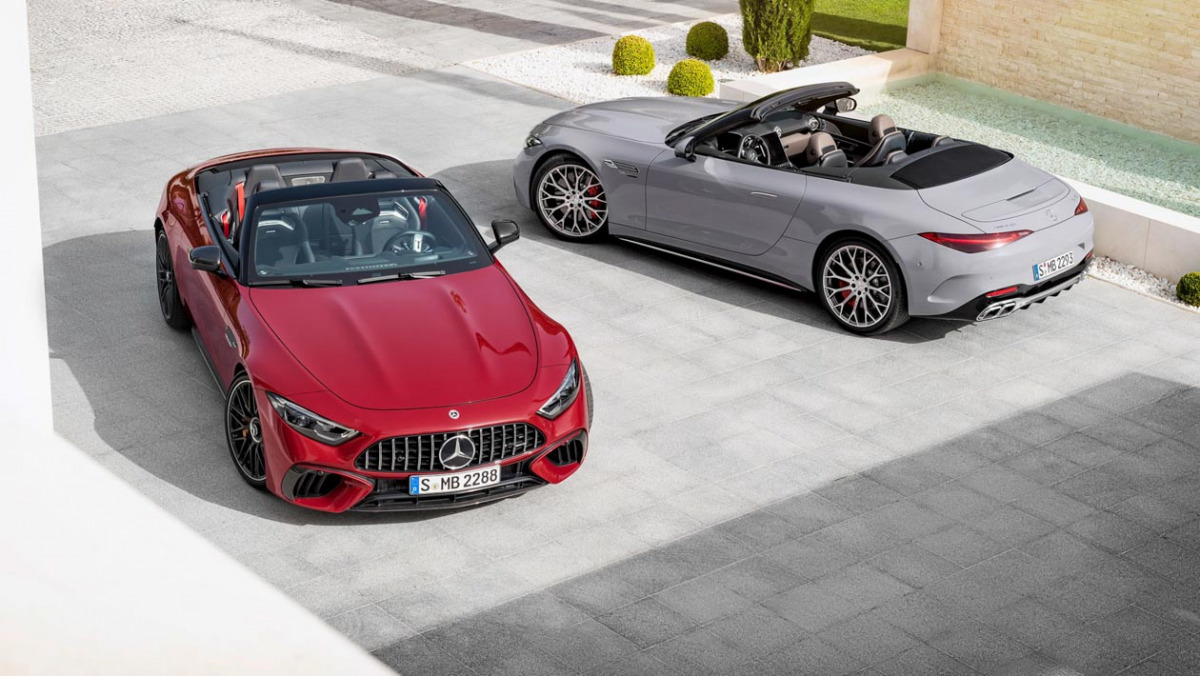 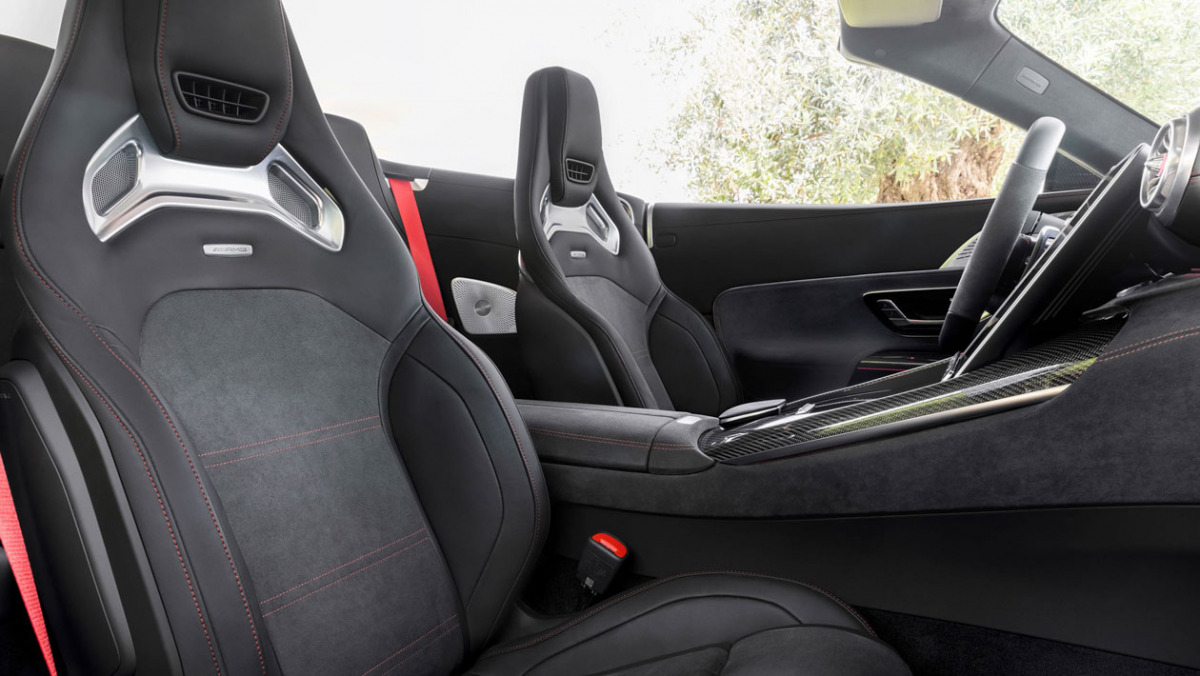 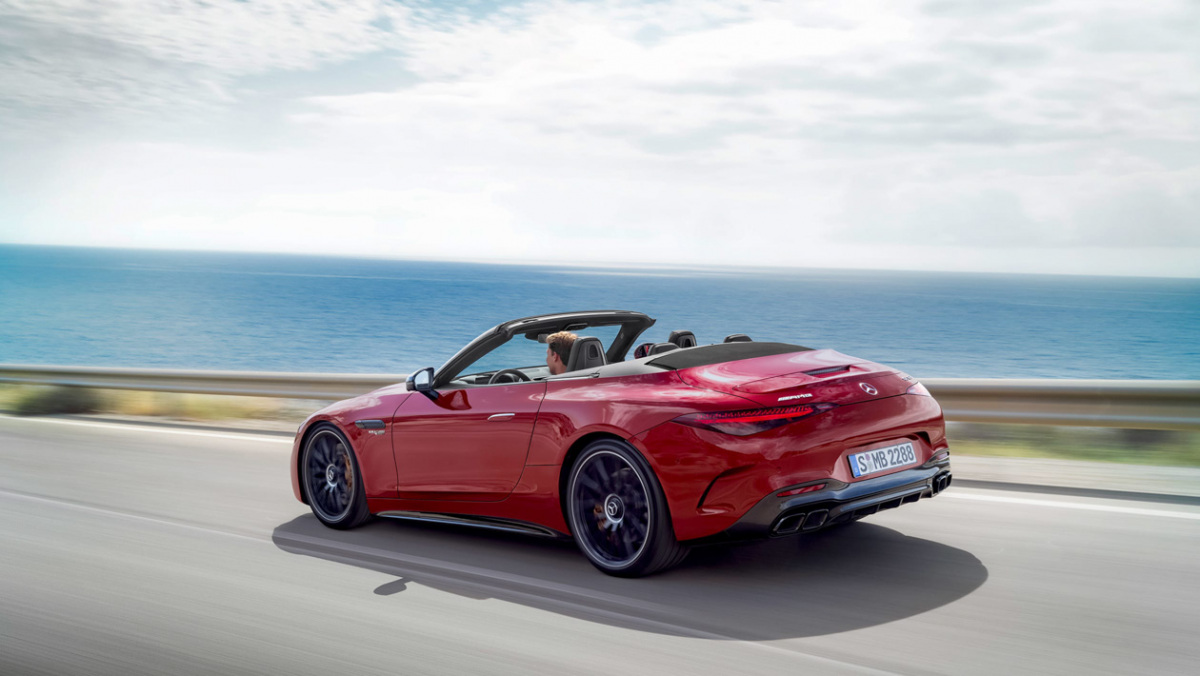 Mercedes-AMG has revealed its all-new SL Roadster, the latest installation of the iconic ‘Super Leicht’ class that’s been in continuous production for over 70 years. After months of relentless teasers, prototype images, drawings and technical deep dives, this all-new interpretation of the iconic roadster is finally out in the open, confirming a return to the fabric soft top, 2+2 layout and even the iconic SL55 moniker.

But before we go into deeper technical detail, first the basics. This new open-top flagship has been developed from scratch by AMG, and doesn’t share any elements or components with either the previous MRA-based SL or AMG’s current GT Roadster.

Initially, the all-new SL will only be available with a pure IC V8 powertrain in two states of tune. The base SL55 heralds a return of the iconic moniker first seen in the R230 generation SL, with the SL63 topping the range, for now.

Both models utilise a lightly modified version of the M177 hot-V V8 engine found elsewhere in the AMG lineup, sharing its underlying 3982cc swept capacity and two twin-scroll turbochargers mounted within the cylinder banks. For its application in the SL, the V8 features a wet sump (unlike AMG GT models which have a dry-sump lubrication system and therefore a different M178 engine code), as well as repositioned intercoolers and an active cooling system for the crankcase.

Both engine options are connected to the same ‘Speedshift’ nine-speed automatic transmission which swaps out the torque converter for a wet-clutch that delivers snappier shifts without resorting to a heavier and more technically complex dual-clutch.

All SL models will come as standard with 4Matic+ all-wheel drive, which will send power predominantly to the rear wheels until the car’s sensors preempt any drive requirement from the front wheels. There’s no way to completely decouple the front axle as in the current GT63 S, though, but there’s still an electronically controlled limited-slip differential on the rear axle.

Thanks to standard all-wheel drive, both SL55 and SL63 models have impressive performance figures, reaching 100kph in 3.9sec and 3.6sec respectively, going onto unlimited 195kph and 314kph top speeds.

There’s not yet been any mention of an entry-level six-cylinder powertrain option – but we expect the range will diversify to include the mild-hybrid straight-six powertrain options as found elsewhere in the Mercedes range.

We do know that the range will soon be topped with an SL63 E Performance flagship that will pair the standard 63’s powertrain with an electrified rear axle which has already been revealed in the GT63 E Performance. This system will also soon find its way into the next generation C63 S and S63 S saloons, and in all four cases will produce 201bhp and 236lb ft of torque that joins the IC’s power distribution to all four wheels. Power is drawn from a compact 6.1kWh battery pack situated above the motors on the rear axle, and the whole module has been designed to fit into the all-new SL’s chassis without any modification.

While the SL’s powertrain options haven’t really diverged from the AMG norm, the chassis has thrown a few curveballs in our direction. Proportionally, the new 2+2 packaging has led to the SL growing in physical size, stretching to 4705mm in length, 170mm longer than a Porsche 911 Turbo Cabriolet. It’s also 15mm wider and 57mm taller than the 911.

Perhaps unsurprisingly, it’s not just its physical dimensions have grown but so too its weight, which at 1970kg for the SL63 is around 100kg up on the previous generation R231 and a huge 260kg up on a 911 Turbo Cabriolet. This extra mass has come despite a substantial application of aluminium and composite materials being used in the body-in-white, with the fabric roof taking another 21kg out of the chassis compared to the previous folding hardtop. The new fabric roof itself is able to be operated at up to 65kph, and neatly Z-folds into its stowed position in 15 seconds.

The new SL will also be the first iteration since the R230 not to be available with any form of air suspension, as both SL55 and SL63 versions will be exclusively fitted with steel coil springs. This doesn’t mean the system isn’t technically complicated, though, as the SL features an all-new five-link front and rear suspension design constructed entirely from forged aluminium components, including the wishbones, steering knuckles and wheel hubs.

All SL models will feature adaptive dampers, but SL63s (and SL55s with the AMG Dynamic handling package) will debut AMG’s application of hydraulically crosslinked dampers with an integrated active anti-roll system. This system works like the one pioneered by McLaren in its supercars, allowing the SL to do without traditional anti-roll bars entirely.

Like McLaren’s system, this essentially combines four truly independent wheels with almost infinitely adjustable roll-stiffness depending on the suspension setup, making the ride very supple while complete control of lateral movement. The hydraulic system also incorporates a nose-lift function on the front axle, and models fitted with the crosslinked dampers also sit 10mm lower than models without.

Steel brakes are standard on both models, sharing a 390mm front and 360mm rear combination with six-piston calipers up front and floating calipers at the rear. A newly-developed carbon composite brake package with larger 402mm front discs are optional for both.

The SL’s sleek new exterior design pairs a traditional cab-rear open-top proportion set with Merc’s current design language currently under the jurisdiction of design boss Gordon Wagner. This has resulted in a combination of bold graphics and underembellished surfacing. At both ends, there are slim LED lighting units and at the front a big panamericana grille with typical vertical slats. This contrasts against the rest of the body’s clean surfacing, with a focus on volumes, rather than aggressive creases and lines.

The overall effect is elegant and subtle for the most part, and in context for a model that is expected to be the last SL with an internal combustion engine. With an opportunity to completely overhaul the chassis and suspension to its own specification, AMG has given its designers the opportunity to really highlight elements like the low bonnet line over the engine (despite being wet-sump) and an aggressive stance, even on the smallest 19-inch wheel option, that were previously impossible due to the limitations of its saloon-derived chassis.

Despite the fabric roof and its aerodynamic compromises, the SL still has an impressive CoD factor of 0.31, helped in large part by the complex active aero both inside the grille openings and underneath the body. Both grille openings on the centre of the front bumper are actively managed, with internal vanes that remain closed a majority of the time to keep drag to a minimum and forcing airflow down and under the car, reducing lift on the front axle. This is balanced out by an active rear wing that works by six different data inputs to adjust its angle and height. A further Active Aero package is optional, which further optimises the wing by pairing it to a moveable flap underneath the car to stabilise the SL at high speeds – a useful feature at 305kph on the autobahn.

The interior design displays a combination of themes from both the AMG GT and GT63, paired with the new-generation MBUX touchscreen interface first seen on the S-class. Anyone familiar with the current system will appreciate the extra usability of the added digital real estate, but to overcome reflections when the roof is stowed, the screen is able to be tilted. Despite the use of widespread digital displays, AMG has designed classic dial graphics within them to connect back to the SLs heritage, but the interior is otherwise typical modern Merc.