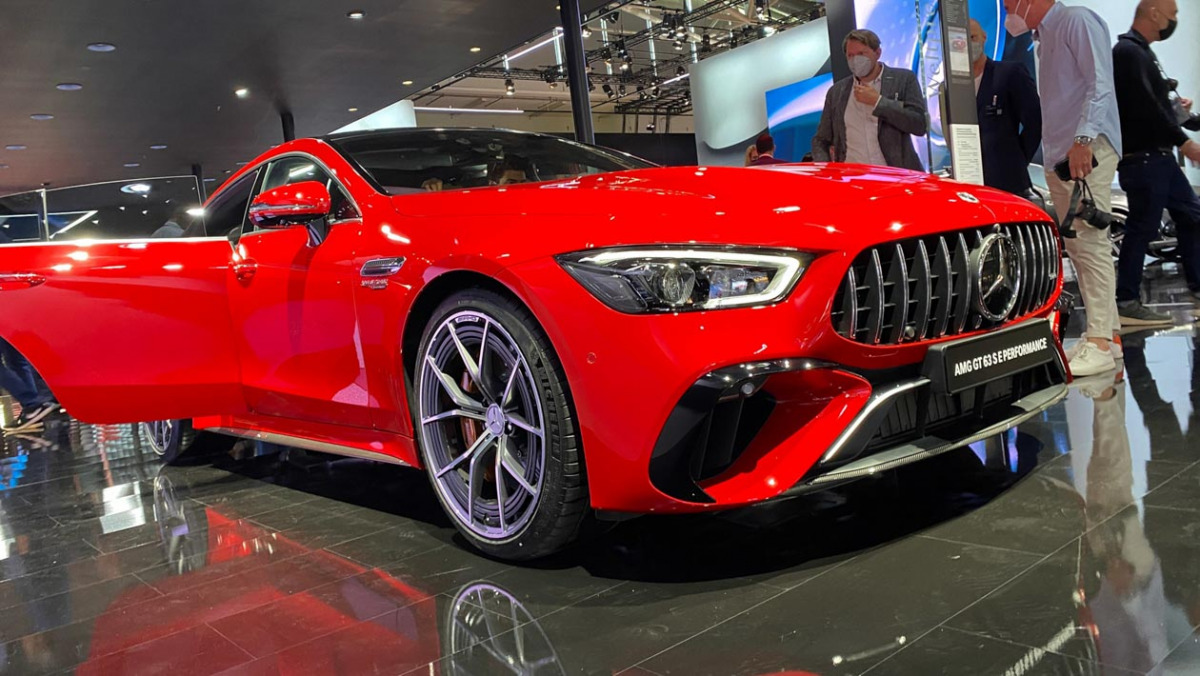 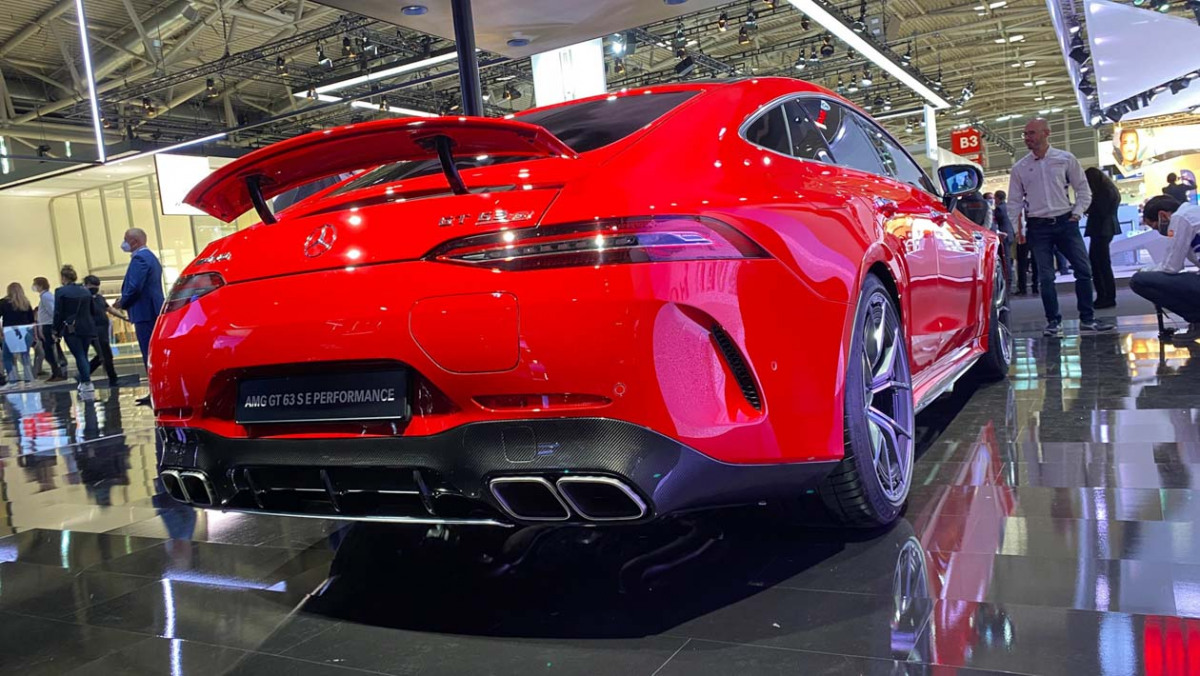 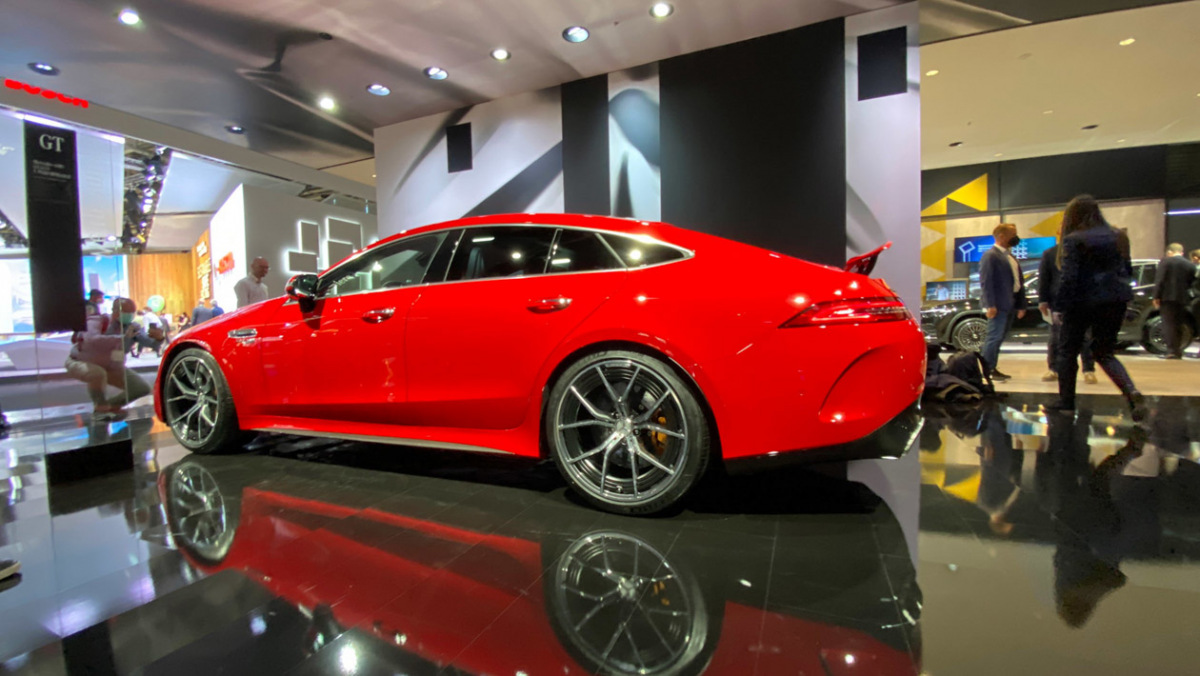 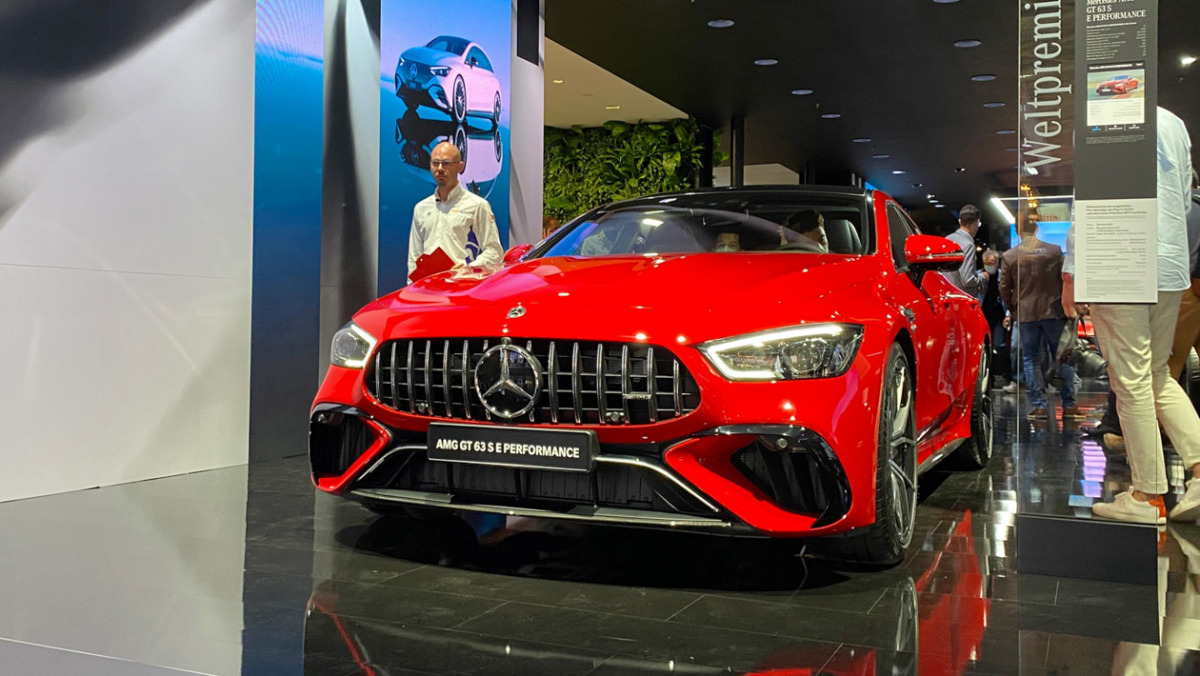 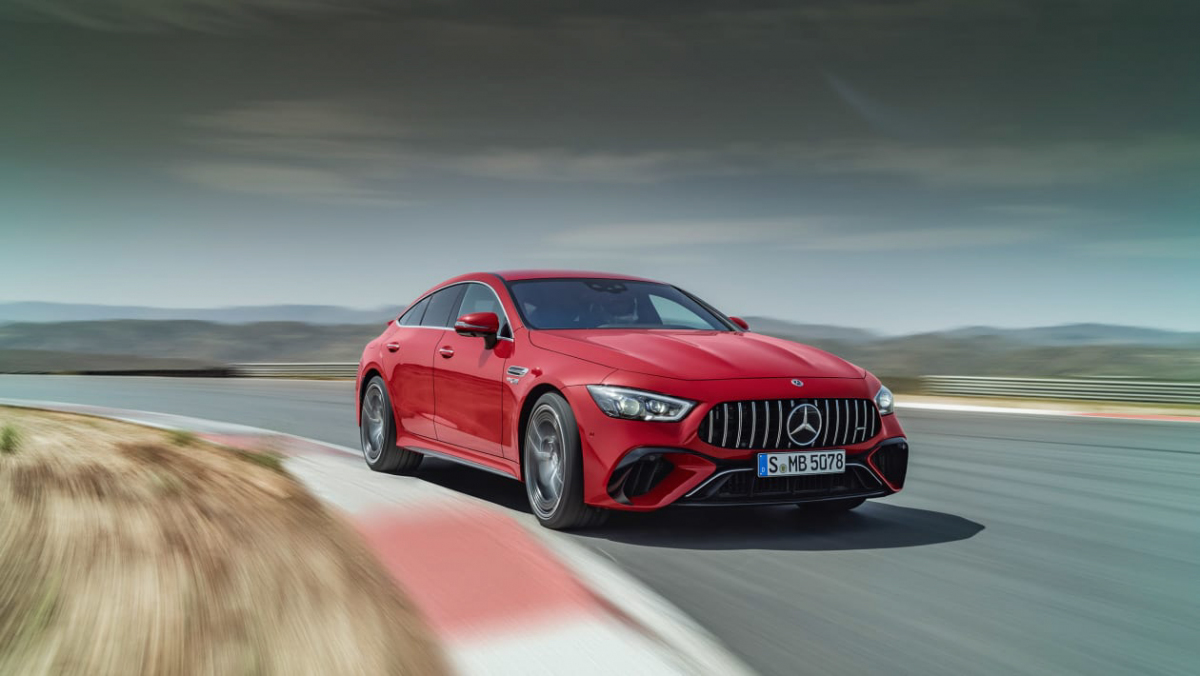 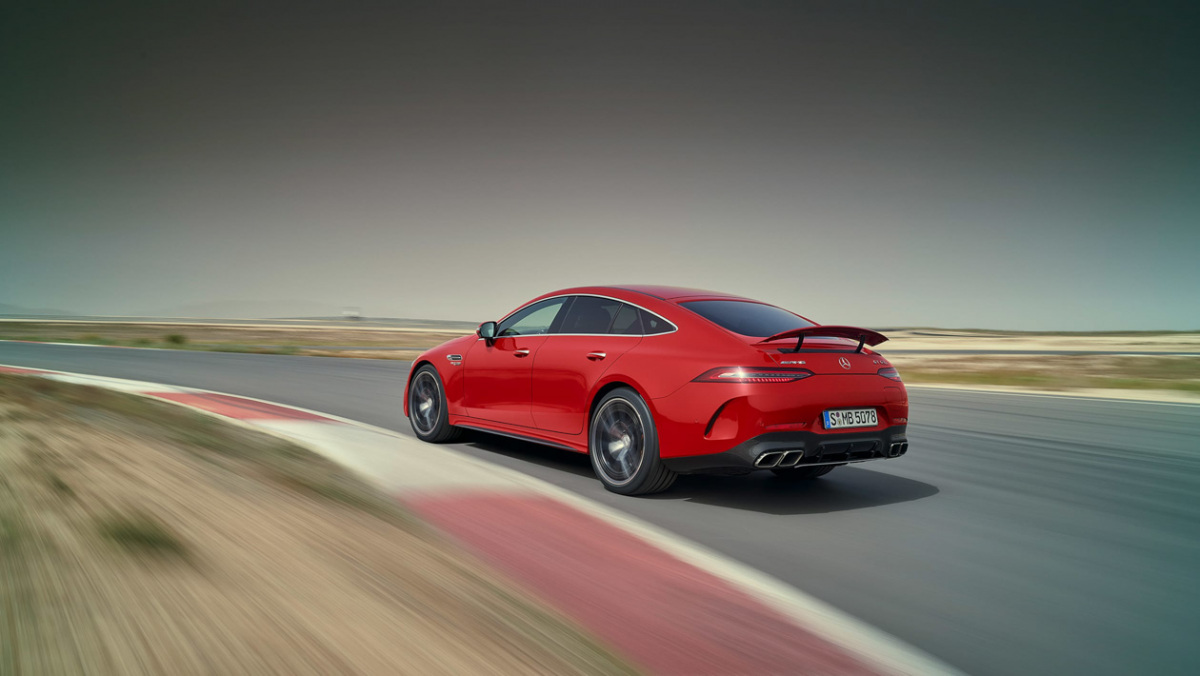 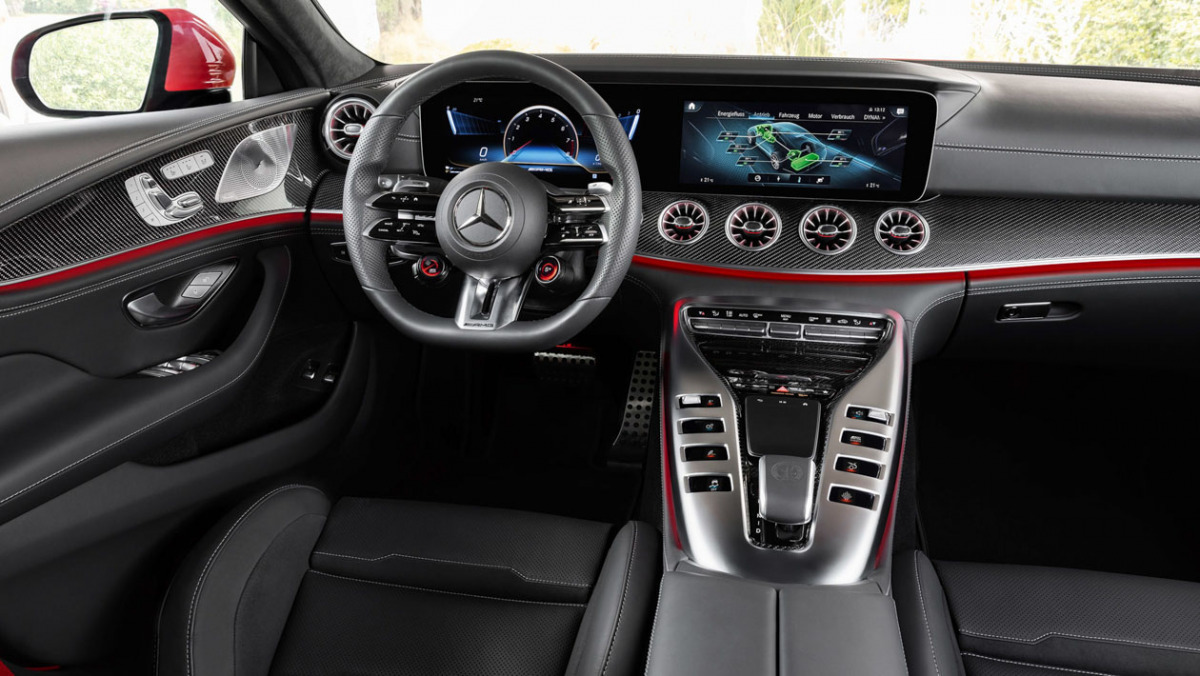 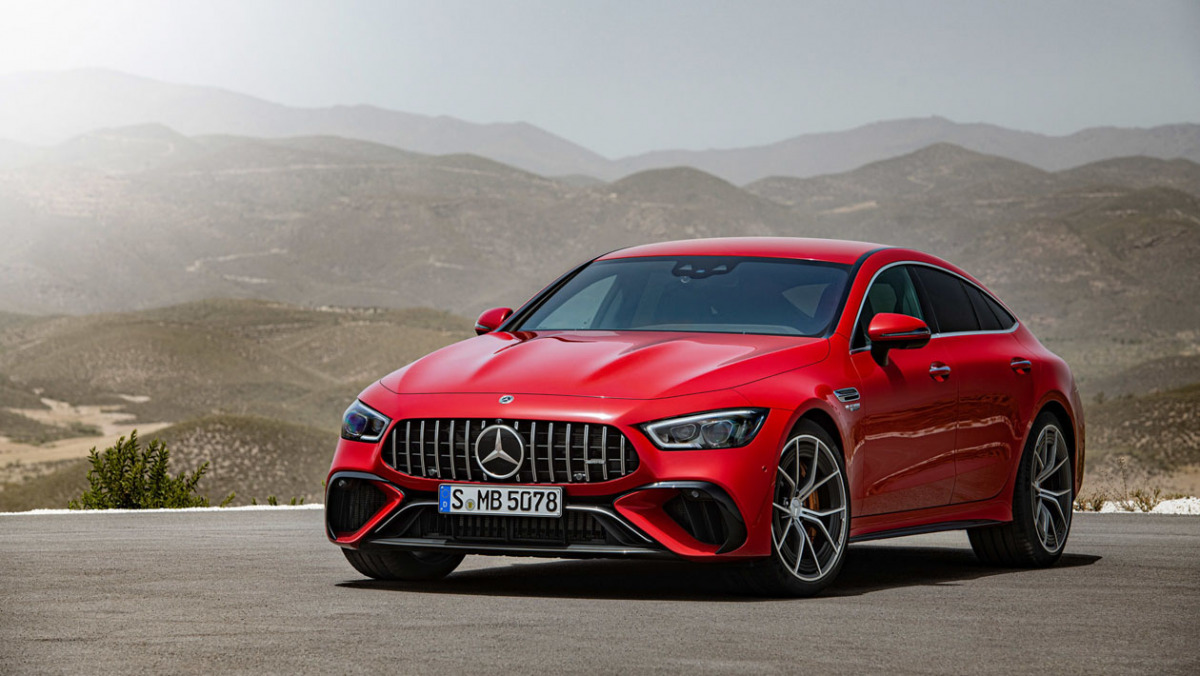 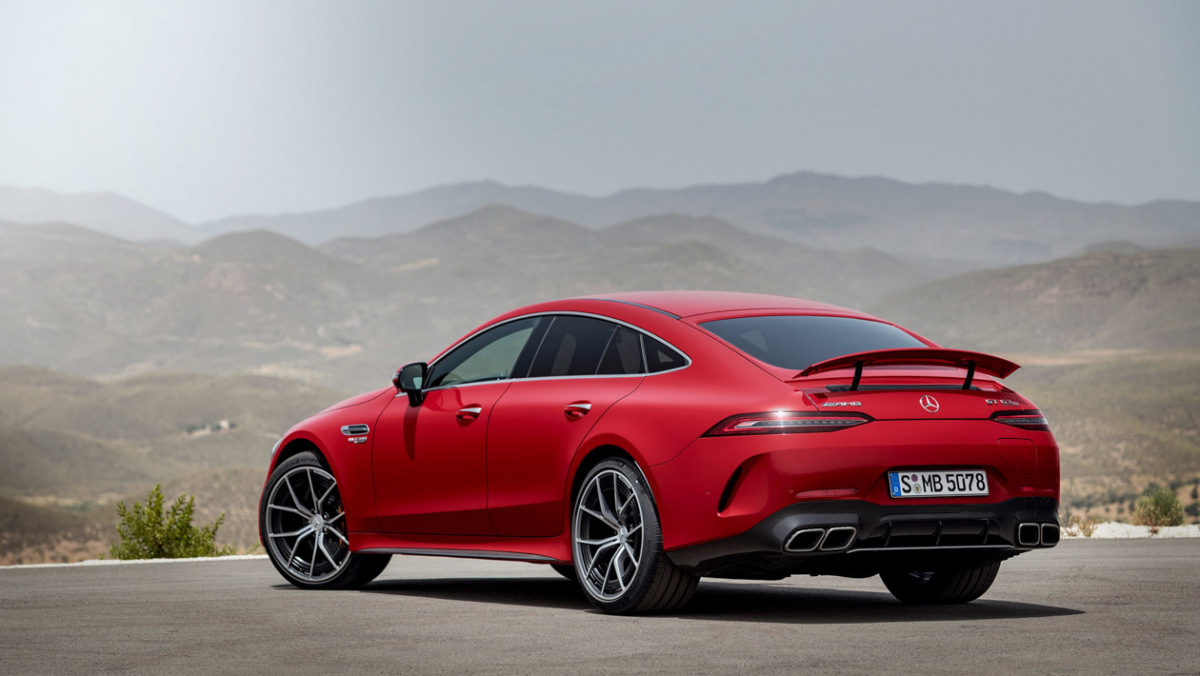 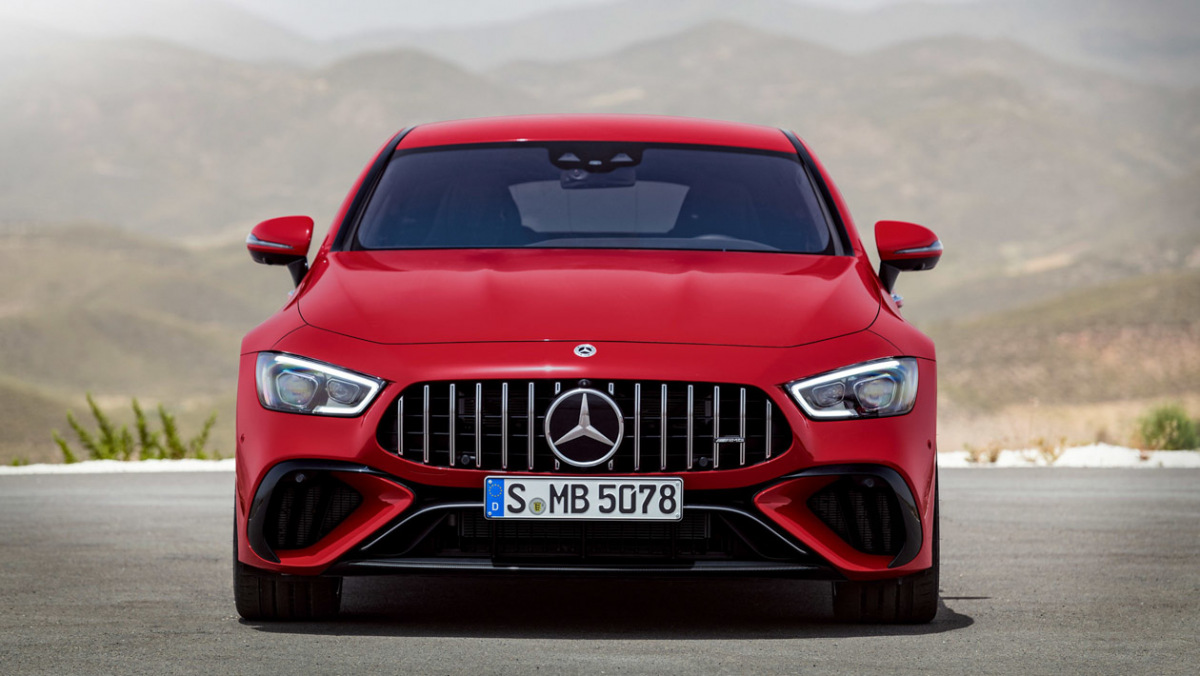 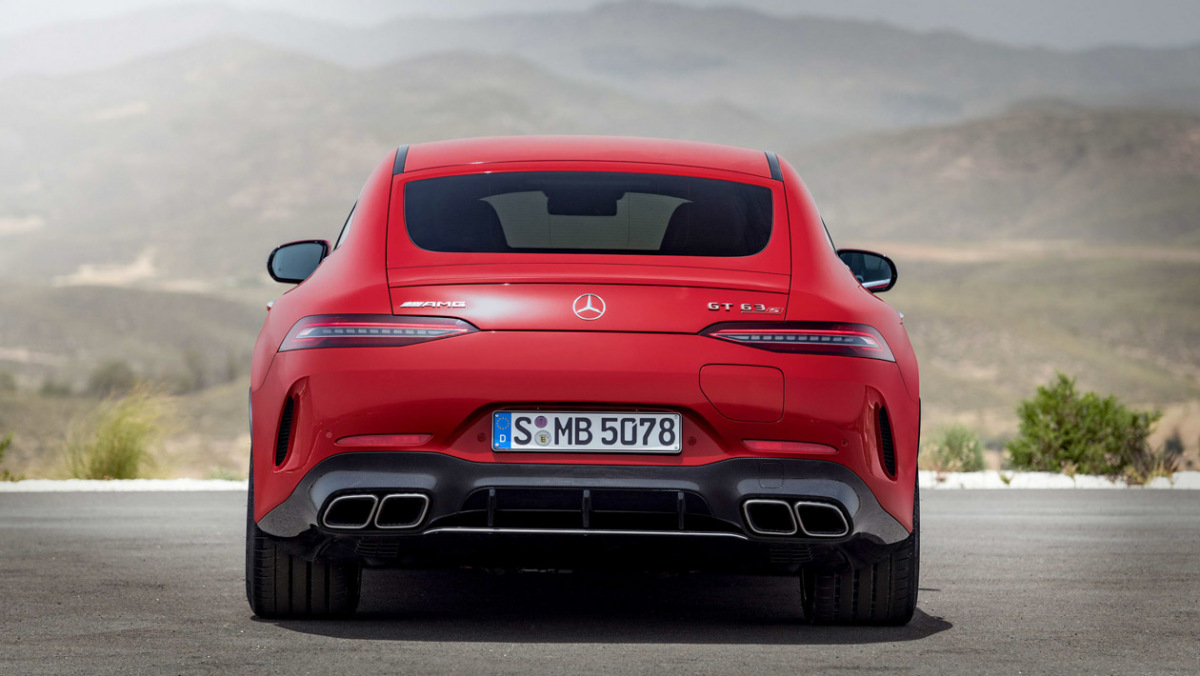 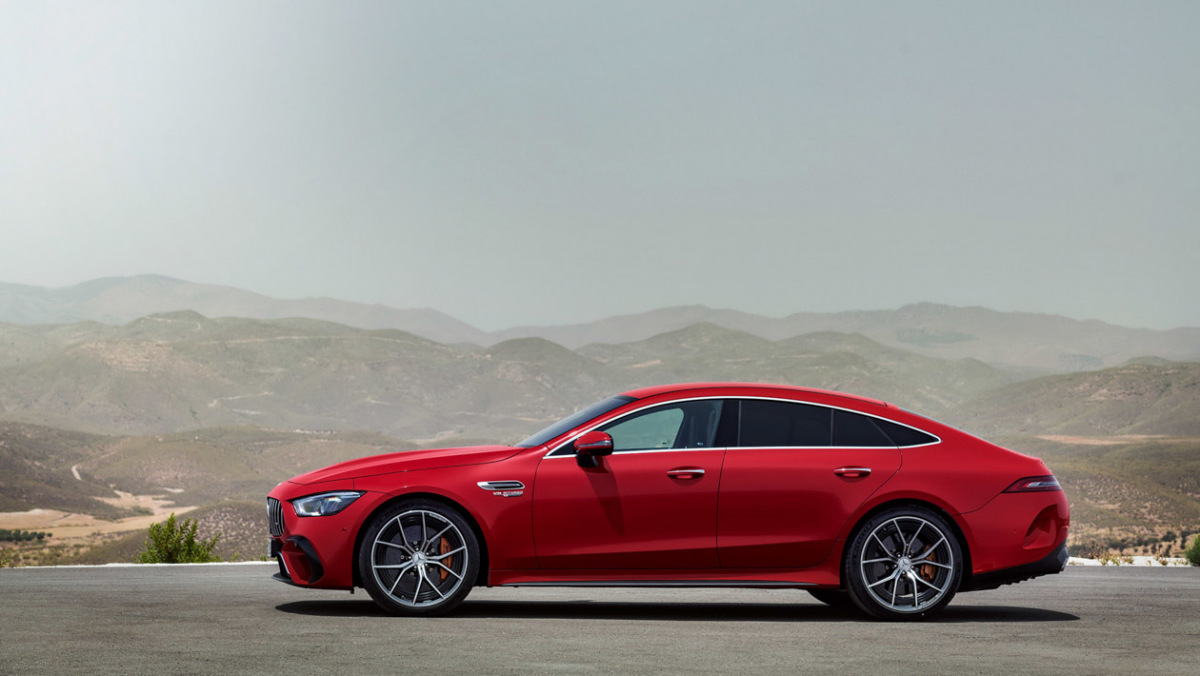 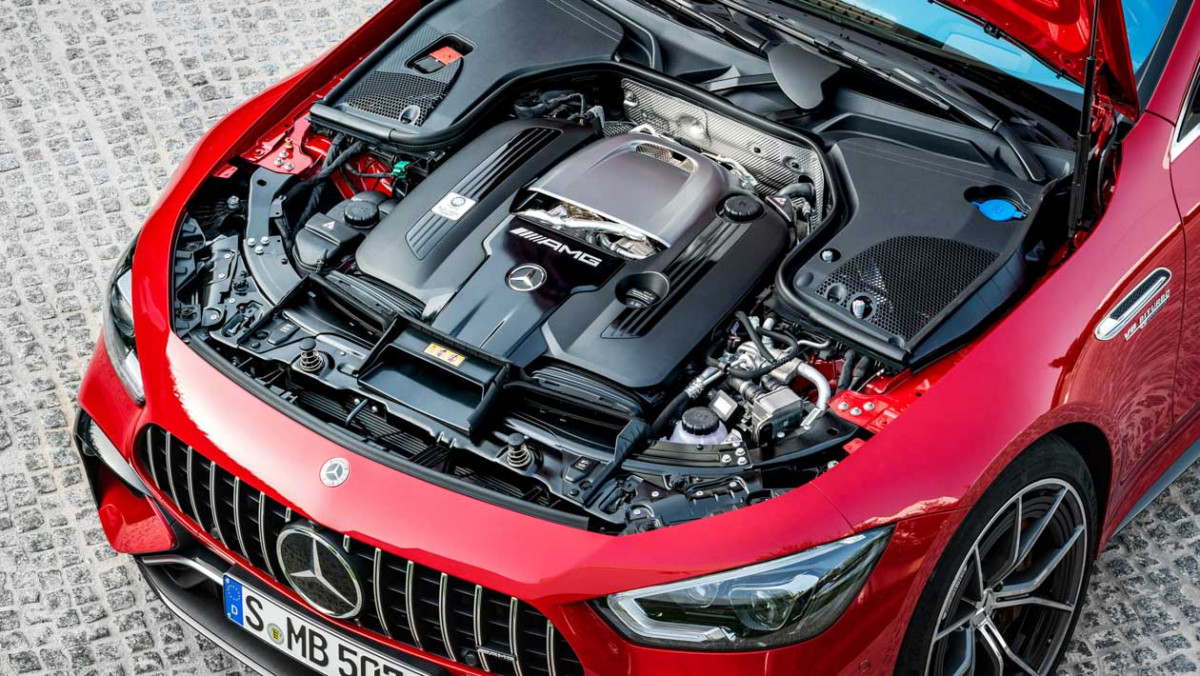 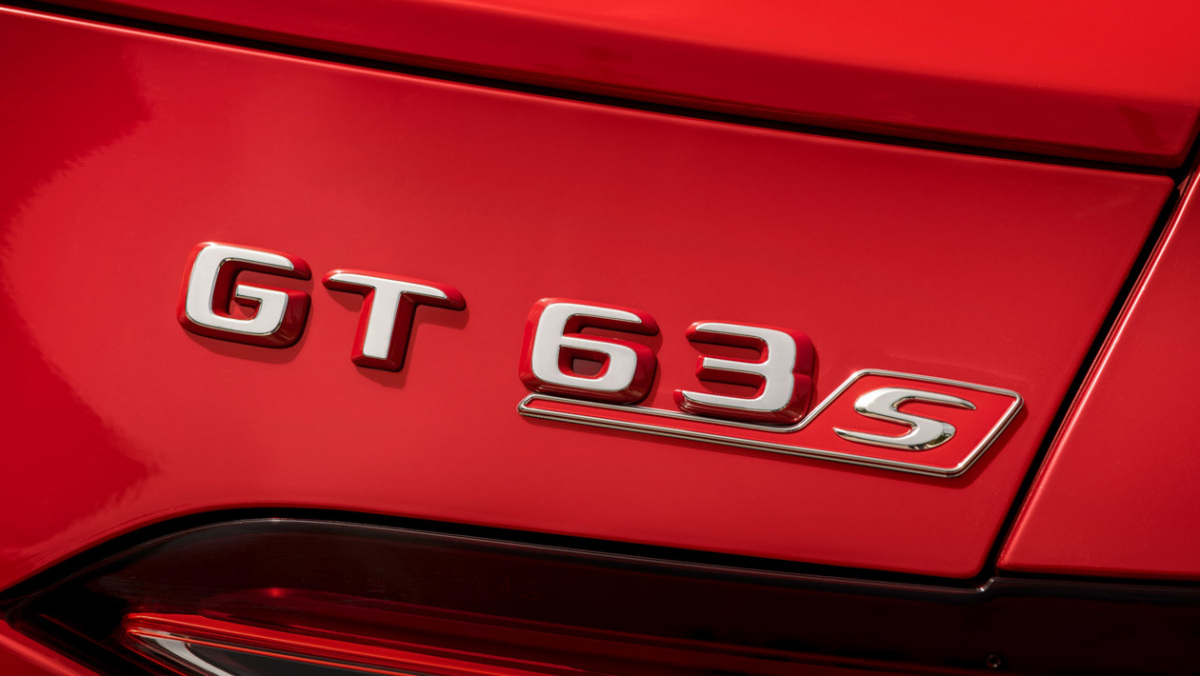 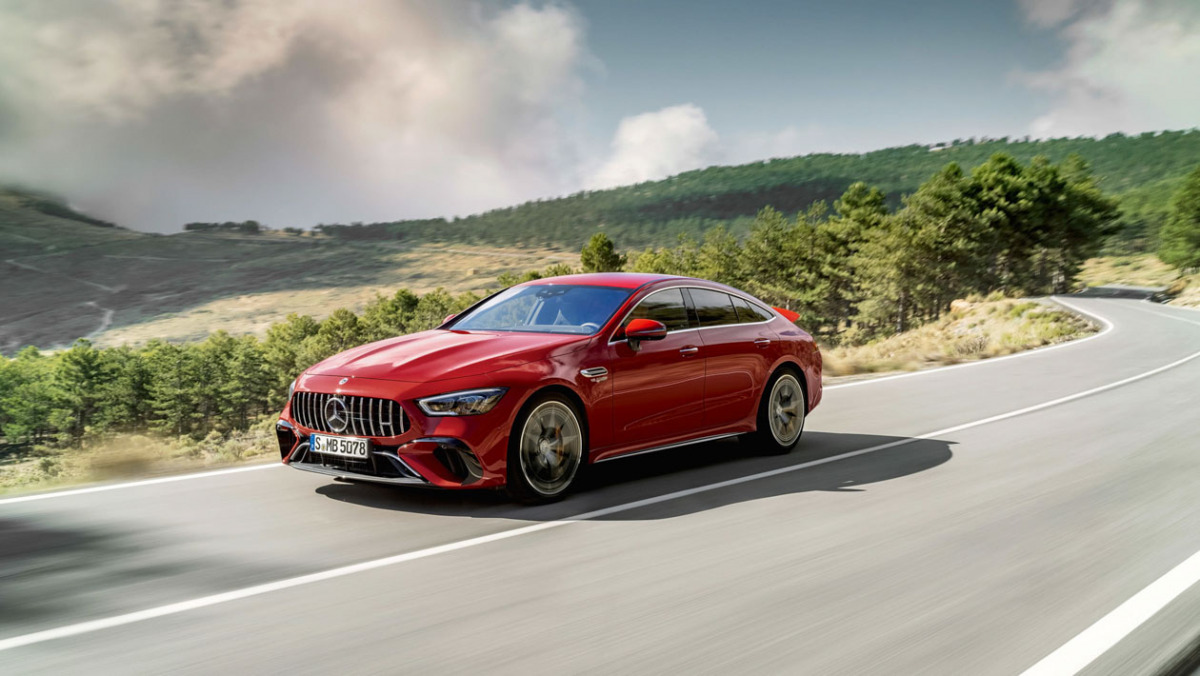 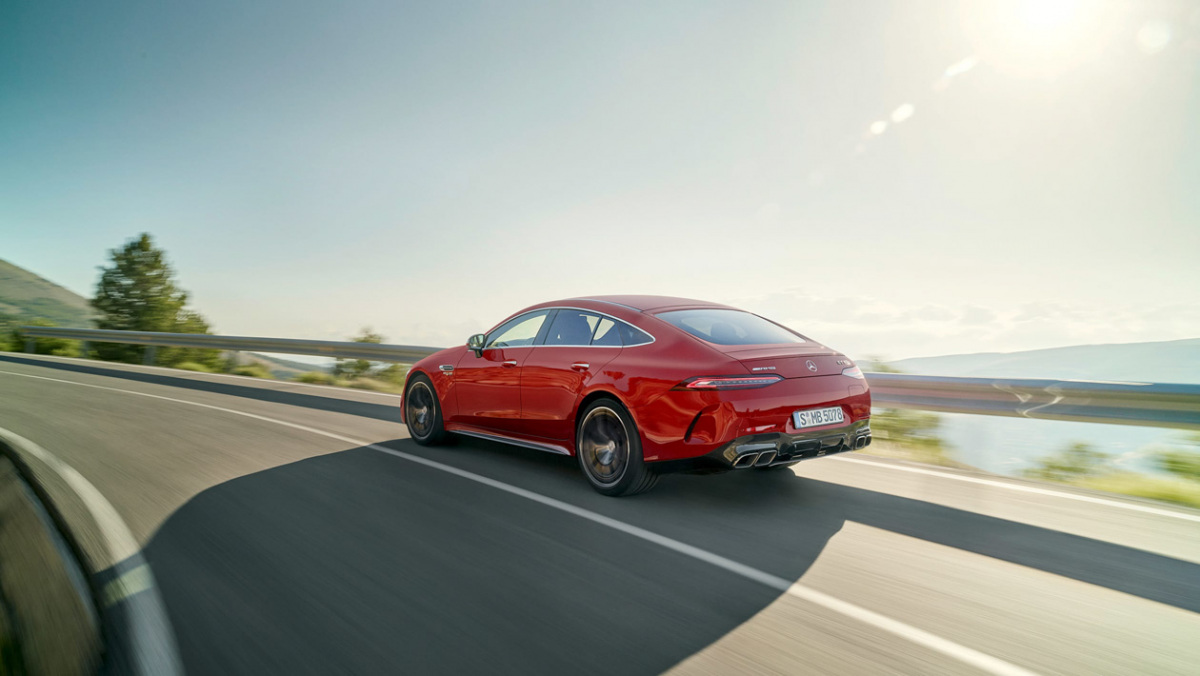 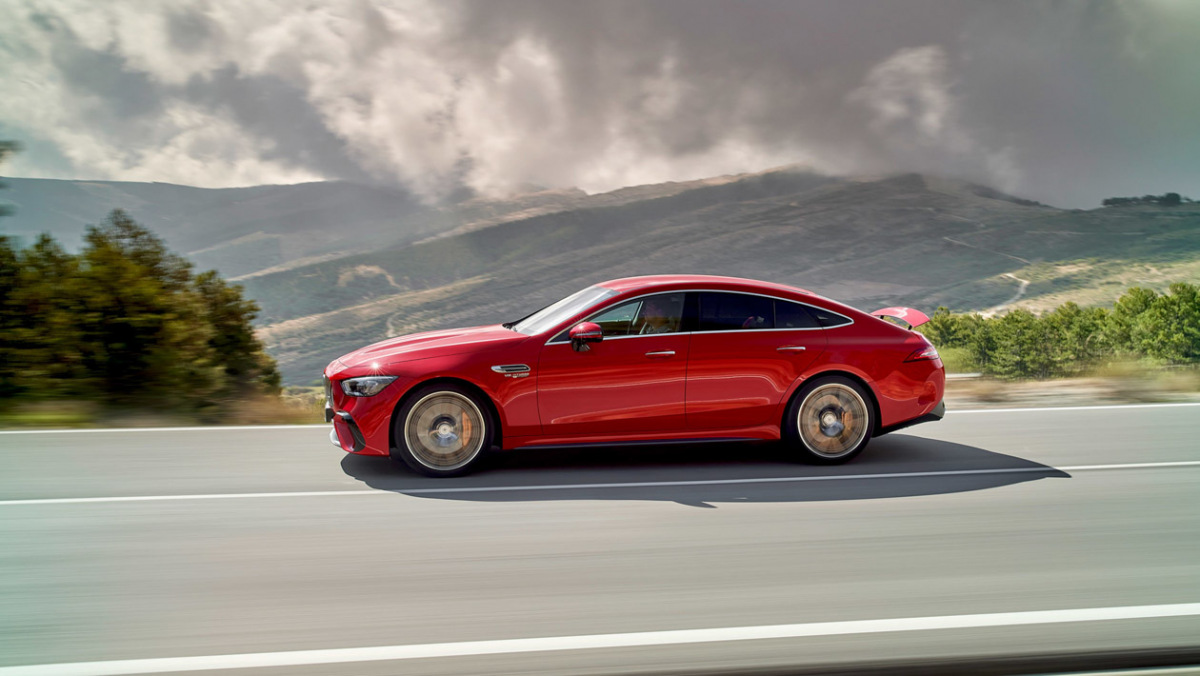 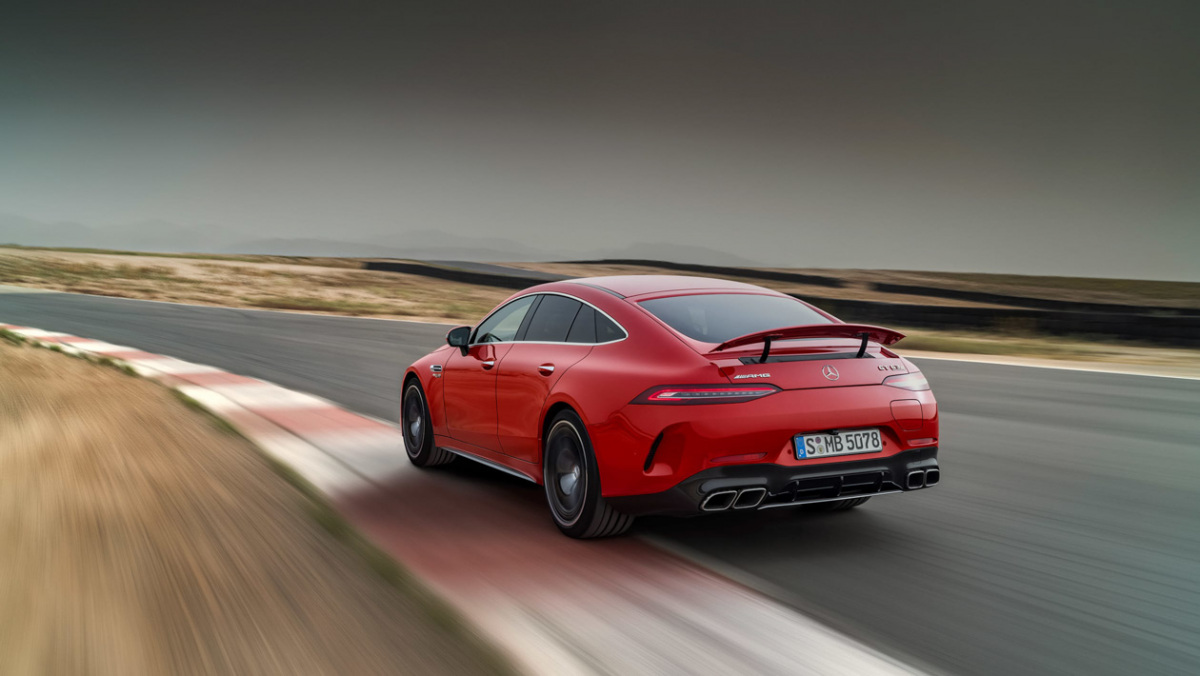 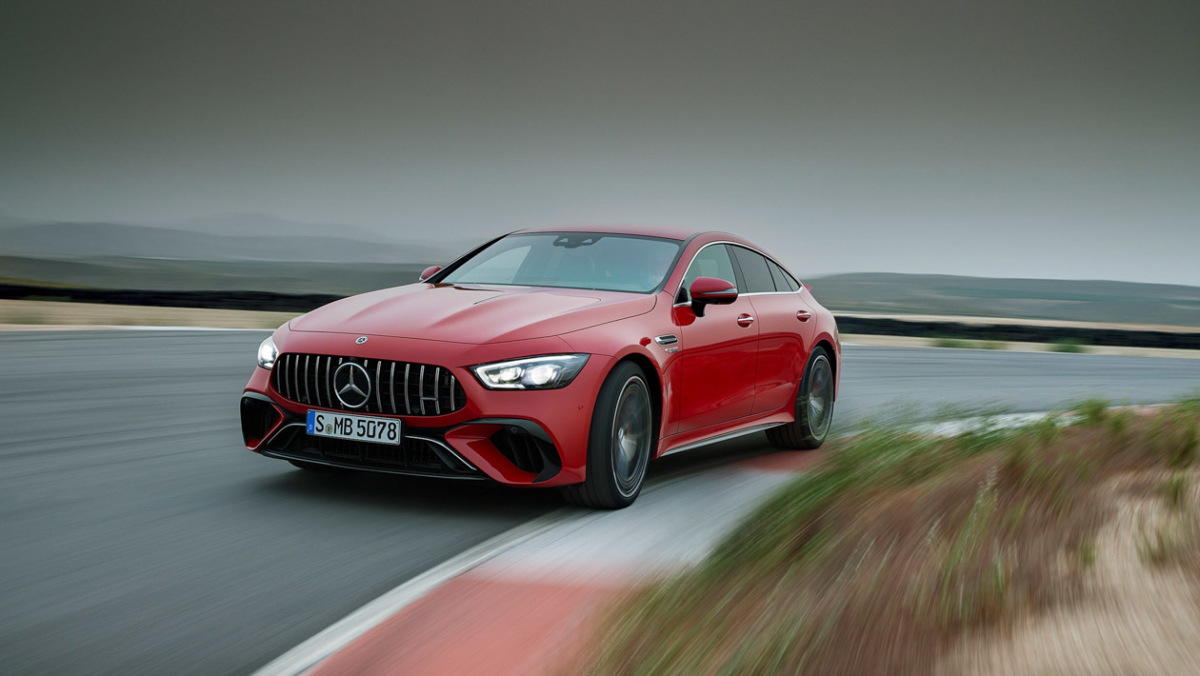 Mercedes-AMG has finally revealed the first of its E Performance plug-in hybrid models with the new GT63 S E Performance model that will top the AMG range. Joining lesser pure combustion models in the recently updated GT 4-door range, its new electrified rear-axle arrangement was revealed earlier this year independently of a specific model launch, but along with the new GT63’s reveal, we now have some context to digest the numbers – and they’re pretty substantial.

Mercedes-AMG quotes combined power at 831bhp, with a peak torque of 1033lb ft available on overboost when launch control is selected. With said mode selected, it’ll reach 100kph in 2.9sec, 200kph in under ten seconds and continue onto a top speed of 314kph. Specifics of how the GT63 S E Performance reaches those figures are somewhat more complicated, but a condensed explanation is that it combines a V8 up front and an electric motor and battery pack out back, with all the power able to go to all the wheels via two separate transmissions.

The long-form explanation is as follows: mounted atop the front axle is the M177 twin-turbocharged 4-litre V8 engine we all know and love. It has identical figures as the standard GT63 S, which equates to a 631bhp peak, with 664lb ft of torque available between 2500 and 4500rpm. One of Merc’s integrated starter generators is also fitted to power many of the engine’s ancillaries, which itself generates 14bhp. The combustion engine’s power is then directed to all four wheels via a nine-speed MCT wet-clutch automatic transmission, with a heavy bias towards the rear wheels through an electronically controlled limited slip differential.

The rear axle then features its own propulsion system, combining an electric motor capable of producing 201bhp and 236lb ft of torque, driven from a 6.1kWh battery pack mounted above it. This is where it gets really complicated though, as drive from the electric motor is then sent to the rear wheels via the same eLSD, but through a separate two-speed transmission. But that’s not all, as power from the electric motor is also able to be sent back up to the front wheels, making all the power available, well, everywhere. This extends to the GT’s drift mode too, meaning that the electronics are able to physically decouple the front axle in order to send all 831bhp through just the rear wheels for ultimate tyre atomisation.

When in its most ecologically responsible modes the GT63 S E Performance has a small 12-kilometres electric range, and on the combined cycle hits 8.6L/100km with a CO2 rating of 196g/km. These efficiency numbers compare dimly on paper to the rival Porsche Panamera Turbo S E-hybrid, but with over twice the battery capacity and over 100bhp less power, the Porsche’s focus is more heavily weighted on efficiency rather than ultimate performance (limited though it is).

Regardless, such a large car with so much hardware crammed in has its compromises in weight, and therefore the GT’s handling. At 2380kg, it is 260kg heavier than the standard GT63 S, so AMG has fitted specific chassis updates to help compensate. This includes new adaptive dampers paired to air suspension with a bespoke calibration. Carbon ceramic brakes are also standard, with six-piston front calipers up front gripping 420mm discs, and smaller single caliper units on 380mm discs at the rear. The seemingly undersized rear calipers are specified as they’re supplemented by the regenerative braking capability of the rear-axle mounted electric motor, reducing the car’s overall reliance on friction braking at the rear.

So if we haven’t lost you yet, that’s the breakdown of what is one of the most complex high performance cars in a generation. We’ve seen high performance plug-in hybrids before, but never one with the ability to spread power to all four corners of the car by mechanical means. But it’s how all this complexity translates on the road that will be it’s real test, as the Porsche Panamera Turbo S e-Hybrid has shown that even the most auspicious of performance car manufacturers often struggle to match the straight-line performance with a handling package that does it justice.

It’s also worth remembering that this plug-and-play type of electrified rear axle will find homes in many other AMG (and Aston Martin) models, paired off with the same V8 in the next S63, and controversially the M139 turbocharged four-cylinder for the next C63. With such a wide application of use, its introduction to the market might have been delayed, but there’s no doubt of the resource and engineering effort that’s gone into its development, which can only be a good thing.

No specific pricing or specifications have been revealed as yet, but we suspect that it’ll sit above the $180,000 price point of the previous GT63 S, and closer, if not above the $194,000 Porsche charges for its flagship Panamera.