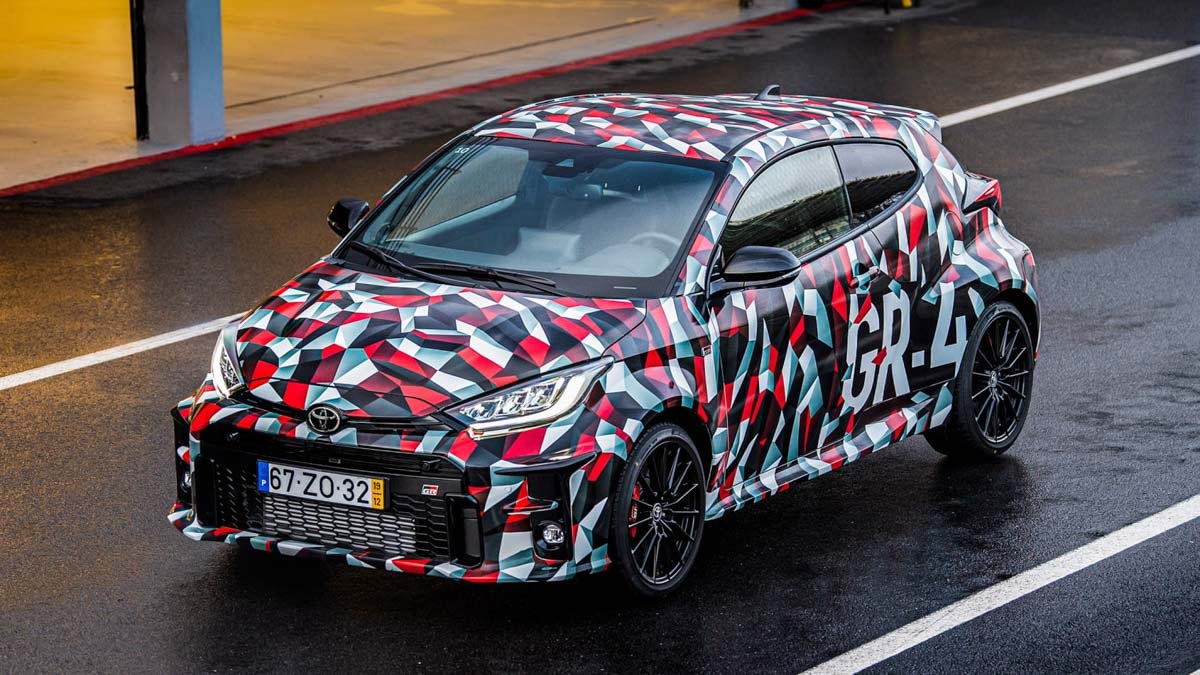 That’s because the hot hatchback, due to be unveiled in full at the Tokyo Auto Salon in January, is a homologation special, just like the Subaru Impreza WRXs and Mitsubishi Lancer Evolutions of old, and will inform Toyota’s next WRC Yaris.

While the car itself is under wraps, we has been able to drive a prototype of the GR Yaris, as well as quizzing the car’s engineers. While Toyota is being coy on exact specifications for the car, we’ve still been able to glean plenty of information about it, and it looks like being one of the most exciting performance cars of 2020.

It makes sense to cover the GR Yaris’s structure first, as it’s one of the areas most important to the car’s status as a homologation special. Gazoo Racing set several goals for the car, including aerodynamics, weight, stiffness and weight distribution, and many of these were decided upon based on requests by Tommi Mäkinen, who for the last few years has served as team boss of the Toyota world rally team.

To this end, the three-door shell is almost completely different from that of the new five-door Yaris we’ve already seen. For one, it uses a carbonfibre structure, while individual elements including the roof, tailgate, bonnet, doors and front wings are aluminium, for further weight savings. In all, the body in white weighs 263kg, 38kg lighter than on a regular Yaris. If that seems insignificant, consider also that the carbon does wonders for structural stiffness, important for a car designed for the stages.

The shape itself is also significantly different. The roofline is 95mm lower than a regular Yaris’s (apparently, Mäkinen wanted it even lower, to benefit the rally car’s aero further) while the three-door shell is stiffer, lighter, and allows greater aero freedom than a five-door equivalent. There’s also further structural stiffening with side members under the car, while the engine is mounted 21mm further back, improving weight distribution.

Rear suspension has changed from a torsion beam to double wishbones (in part, allowing space for the driven rear axle), springs and dampers are passive rather than active, while the front and rear tracks are wider, by as-yet unspecified amounts. Extended bodywork covers this wider track front and rear.

While the car hasn’t yet been officially unveiled, some aspects of its design are still clear through the camouflage: a large lower front grille directs air to an intercooler, while a grille above the number plate supplies the radiator, and large vents to either side direct air to the front brakes. The rear window is so small it doesn’t even get a wash/wipe (on the prototype at least).

First, the bare figures. Toyota hasn’t yet revealed exact numbers, but states the GR Yaris will make more than 247bhp, and more than 258lb ft of torque.

We suspect these numbers are somewhat understated. Why? Well, Toyota claims the car’s 1.6-litre engine is the most powerful of its capacity, and given Peugeot has previously offered a 266bhp 1.6-litre in its 308 GTi 270 and RCZ R, it’s fair to assume the Toyota will be capable of a little more than this.

What might come as more of a surprise is that the Toyota 1.6 is a three-cylinder unit, rather than a four. This makes it comfortably the most powerful three-pot on the market (the Mini-derived 1.5-litre three in the BMW i8 makes ‘just’ 228bhp), but the motivation behind using a three-cylinder engine is once again homologation, this time for the R5 class. From 2020, R5 cars will be powered by three-cylinder engines, and now Toyota has the perfect unit handy.

As well as being powerful, it’s lightweight – again, Gazoo claims the world’s lightest 1.6. The drivetrain it’s attached to is light too. The GR Yaris uses permanent four-wheel drive, but instead of using a heavy centre diff arrangement, it features a clutch pack diff at each end, capable of delivering up to 100 per cent of the engine’s torque to either axle.

In practice, it won’t actually do this, as Toyota splits the drive among three settings – Normal, aimed at road driving with a 60:40 front-rear split, Sport, which shifts drive to 30:70 for a rear-biased feel, and Track, which is a pure 50:50 split aimed at, Toyota says, ‘circuit and dirt’. A circuit pack, with limited-slip diffs at both ends, will be optionally available. Oh, and there’s no ‘drift mode’, because as chief engineer Naohiko Saito explains, if you really wanted to do that, ‘front-engined, rear drive is better’.

And if you’re now expecting a ‘motorsport-inspired’ paddleshift gearbox, then we’ve got either good or bad news depending on your inclination: the GR Yaris will be six-speed manual only. We apparently have the Japanese market to thank for this, as enthusiasts there still predominantly opt for manual transmissions, even if the rest of the market is heavily auto-biased.

A few caveats first. Our drive of the GR Yaris was of a disguised prototype car, with several changes still to be made before it reaches production. In addition, neither the Portuguese road route nor our laps around the Estoril race circuit were what we’d call ideal – the former was a little too heavily trafficked and short on truly testing sections, while the latter was just too fast and open for a car designed for much tighter tarmac.

Still, there’s plenty of promise. There’s not much we can say on the cabin, given most of it was under sheets, but aside from a relatively high driving position, everything else seemed about right – seat comfort, control spacing and weights, instrument clarity.

The engine is certainly interesting. It sounds like a triple at start-up and when ambling around, but the gruff noise elsewhere is quite unlike any other three-cylinder we’ve tried. There seems to be a complete absence of artificially enhanced sound or even any real exhaust tuning. Instead, the sound is mechanical and purposeful – not unlike that of old Evos and Celica GT-Fours, which were more businesslike than they were tuneful.

There’s no doubting its performance, certainly. Exposure to modern performance cars means it’s not as startling as those earlier homologation cars were in context, but in the lower gears it really moves, and only really runs out of steam 500rpm or so from the 7k red line. Response is good too – at anything over around 2000rpm it picks up cleanly and has relatively little lag, while slotting through the six-speed feels not unlike the short, notchy shifts of a GT86.

Throttle and clutch are light, and the brakes are a treat – there’s certainly motorsport influence in the firm and progressive pedal, and there was no sign of fade on track despite hopping into the car after other journos had been round in five-lap stints.

As previously mentioned, road conditions made it difficult to determine some of the car’s characteristics, but on track it seemed to be nicely balanced, turning in positively and resisting understeer even around longer corners, though a slippery surface meant it wasn’t beyond washing wide if you used too much power too soon. We drove cars with and without the circuit pack, which brings forged wheels and Pilot Sport 4S tyres as well as a pair of LSDs, and both grip and steering feel seemed improved with the pack equipped.

What the road route did illustrate is a car with surprising maturity to its ride. The stiff structure means even a relatively firm set-up seems less punishing, as bumps don’t result in those subtle but perceptible creaks and noises that make a car seem stiffer than it is. Its ability to handle bumps feels closer to a Golf R than a Focus RS, in this respect.

Saito tells us the project began at the end of 2016, so it’s come together in a relatively short space of time. They’ve worked with the WRC team since the start though, and more recently drivers including 2019 champion Ott Tänak, Jari-Matti Latvala, and Kris Meeke have all taken turns behind the wheel.

Interestingly, Saito says the engineers all dived into Toyota’s archives at the start of the project, as none had experience working on all-wheel drive in this application, and the most obvious point of reference was to dig through old Celica GT-Four documents.

The team also pulled apart Focus RSs, Audi S1s and Lancer Evos, and drove examples of each too – though ultimately, Toyota went its own way with both the engineering and the driving feel. ‘It was fun, though!’ mentions Saito. The S1 was apparently of particular interest, not because of how it drives (though it’s a great car in its own right), but because Toyota was amazed at how Audi had managed to package its drivetrain into such a compact car – there’s clearly inspiration in that respect in the GR Yaris.

I ask him whether like those old rally cars, Toyota would develop the car over time, perhaps releasing ‘Evolutions’ as the rally team demanded changes to improve the competition car. It’s a possibility, he says, though there are no concrete plans. Gazoo Racing was apparently already able to meet 90 per cent of the requests made by the rally team, so perhaps there’s room for more in the future…

Finally, pricing. This we don’t know just yet, and Toyota won’t even give us a ballpark, not least because such things usually change significantly in the UK based on exchange rates and the like.

It should be ‘competitive’ though, as the GR Yaris is an actual, volume road car and not a skunkworks project like the Yaris GRMN. It has to meet minimum homologation numbers for that body style for a start, and needs to justify the engineering Toyota has put into it, not least all that carbon and aluminium.

As for when we can expect to see it, the production model will be revealed officially in January, but deliveries will begin later – currently around autumn 2020.