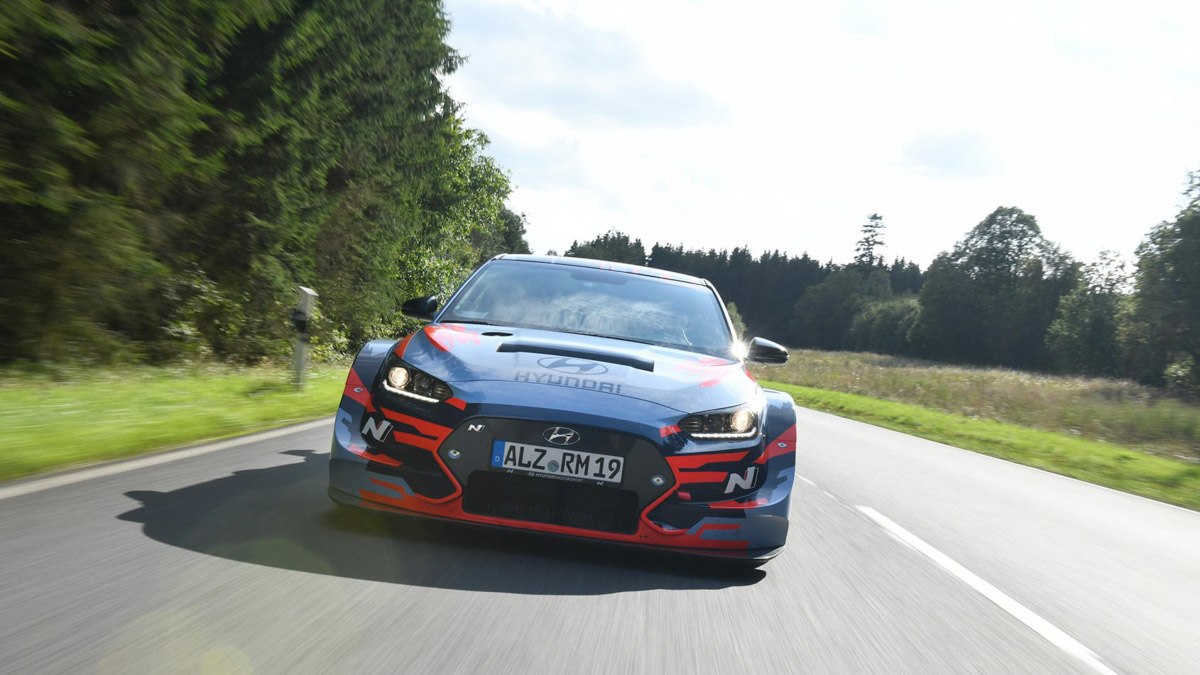 So there’s this corner at the Nurburgring, about which the engineers at Hyundai are kind of obsessed with. It’s a gentle downhill left hander that’s almost but not quite flat in a horrendously high gear in pretty much any car you happen to attack it in. Which is why Albert Biermann and his team of engineers at Hyundai’s N Division consider it such a definitive corner in the set-up of their car, their thinking being that if a car feels good through Schwendenkreuz then it will feel good anywhere. And so guess what? The first time I went through it in the Hyundai RM19 it felt absolutely sweet as a nut. Easy-peasy, if not quite flat out. Which is pretty incredible given that the RM19 is a pre-production mule that’s been built by people who normally churn out hatchbacks for a living. And who have therefore never built a mid-engined car before.

In the RM19 the R stands for Racing and the M for Midship. At the moment the body-shell looks like a Veloster on heat but this gives no clear idea as to what the eventual Halo N car will look like. However, the car’s mid-engined chassis, its steering, its brakes and aspects of its transmission and e-diff all give a pretty good clue as to what the eventual production car will drive like, so it’s well worth some consideration. And let me tell you; even at this stage it’s already all a bit tasty, with double wishbones at the back, MacPherson struts at the front, 20in wheels and tyres and a vast set of ventilated steel brake discs at the corners.

At the moment the RM19 is powered by a WTCR-spec 2.0-litre turbocharged petrol engine that has either 350 or 390bhp, depending which map you select via a button on the steering wheel. So it goes quite well. But this is categorically not the engine it will go into production with. Next year Hyundai will produce the RM20, which will be much closer to the eventual production car in both look and specification, and you can probably guess what sort of powertrain it will be powered by, maybe one that doesn’t use a whole lot of petrol.

The gearbox is interesting, too, because it’s a six-speed sequential that has again been lifted straight out of the WTCR racer. Yet somehow Hyundai’s engineers have manged to refine it to work quite brilliantly on both road and track. It works so smoothly, and is so quick, you wonder why more road cars can’t have gearboxes like this.

Hyundai doesn’t quote a 0-100kph time but subjectively it feels like the RM19 would easily dip below four seconds with the 390bhp map selected. Top speed is quoted as being limited to 241kph, yet we clocked 174mh in it down an autobahn.

On the road, especially, the RM19’s transmission – and its chassis – really are something else. It feels quite bizarre driving around in a car that looks like this on the public road. People tend to just stop and gawp at you as you rumble past. But actually the RM19 drives, and more to the point rides, in a manner that’s completely opposite to the way it looks on the road.

Its ride is supple, the suspension breathes extraordinarily well over rough surfaces, its steering feels refined, precise and nicely connected but without any of the kickback you’d naturally expect from a car that looks like it belongs on a race track. Even its brakes have a decent amount of feel, despite the fact that the pedal travel is a touch too long and the response isn’t quite where it should be just yet.

True, the engine and gearbox generate an absurd amount of noise on the road, to a point where you need to wear a headset to be able to communicate with your passenger. But the chassis – which is by far the most important and relevant aspect of the RM19 – is already an absolute peach on the road, even at this early stage in its development.

Think Porsche Cayman S and Alpine A110 and you won’t be too far wide of the mark. The price will probably be around the $70-80k mark, although if it gets the powertrain we suspect it will then maybe this will rise in the fullness of time. Either way, Hyundai isn’t scared of the competition, and it doesn’t get much stiffer than a Porsche Cayman,

So what happens next? In 2020 Hyundai will produce the RM20 pre-production car, which may or may not still use the same engine as the RM19. And in 2021 they will put the final production car on sale with a similar but more refined mid-engined chassis, a completely fresh set of clothes and a powertrain that will at the very least be hybridised, or possibly something even more extreme than that. In the meantime there will be all sorts of other N cars to fill the gap; think i20, think Kona, think lightweight and dual clutch i30N and so on. 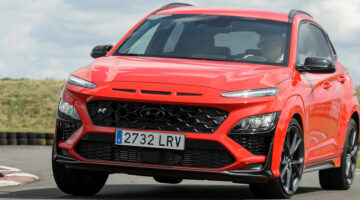