Toyota’s Kinto program has just released a selection of personalised performance upgrades for its GR Yaris, where amongst various changes to the powertrain and chassis calibrations, there’s also a slight bump in performance from its turbocharged three-cylinder engine.

Kinto is a separate entity within Toyota that covers a car sharing service, factory refurbishments and personalised upgrades for Toyota models. In this case, the personalisation program extends to both its powertrain and chassis electronics for GRs purchased through the Kinto system (specific models called Morizo) and privately owned cars. It’s only available in Japan for now, but could be rolled out to other markets as the Kinto program spreads into other markets.

The most substantial of these upgrades for the GR Yaris is a 13lb ft torque increase from 273 to 286lb ft, operating over a slightly narrower rev-band of 3200-4000rpm. The extra power is unlocked with a new tune for the ECU – there are no hardware changes – but with it also comes with the option of specific personalised tuning for other systems including the throttle mapping, torque distribution between front and rear axles and steering assist settings.

To establish these personalised settings, Toyota will fit one of 27 different setups based either on a consultation, or from driving data obtained on a specialised driving course organised through a GR Garage. On GR Yaris’ purchased through the Kinto service, the torque upgrade will be free, but will cost around $1000 for privately owned GRs at current conversion rates. The bespoke tuning consultation is then available for just over $60 or $100 for the closed course configuration. 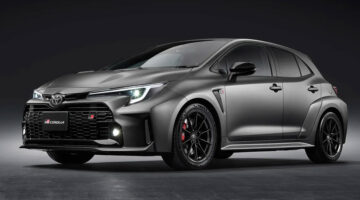