The AMG GLB35 does everything according to Mercedes, appealing in a similar manner to the much larger and more expensive performance SUVs it tries so hard to emulate 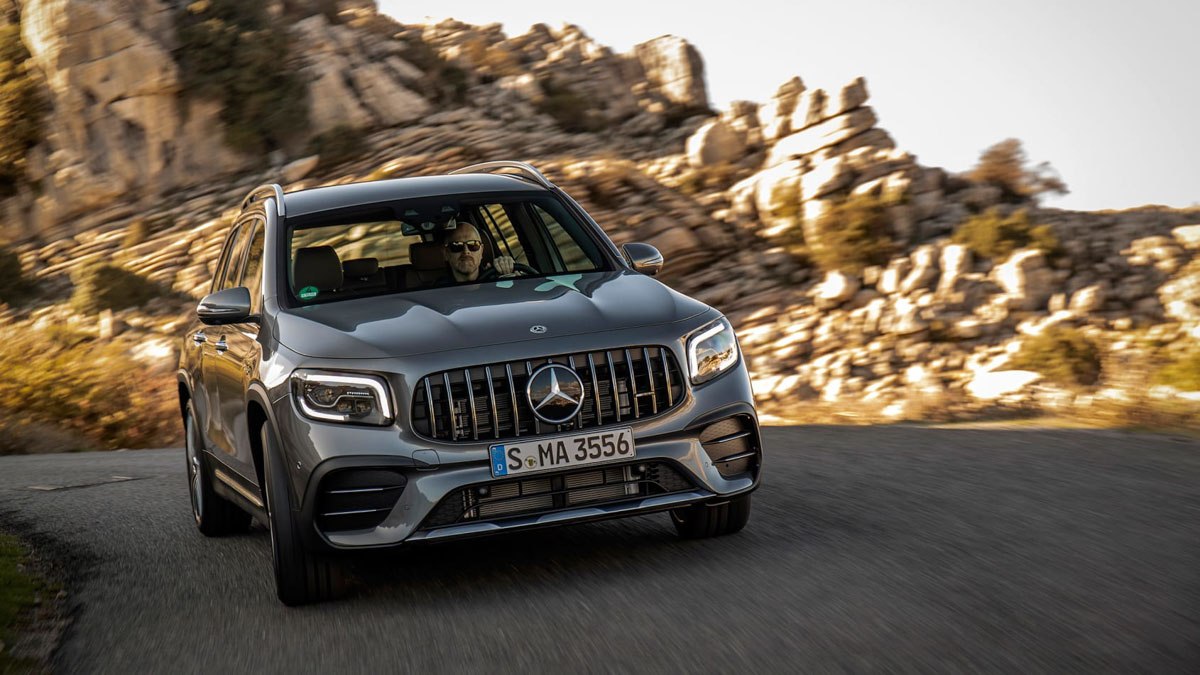 The premium performance SUV – a car designed to hit all the notes, a do-everything no-compromise machine for those whose lifestyle no longer supports exclusive use of a sports car.

For a time the genre was limited to high-end models such as the Porsche Cayenne Turbo or BMW X5, with equally high-end price tags, but trickle-down economics means it’s now available in the compact premium SUV niche. For Mercedes-AMG, the result is the GLB35 – a compact, seven-seat, all-wheel drive performance SUV.

In reality, we’ve seen Mercedes-AMG do compact performance SUVs before with the old GLA45, but the new GLB is something rather different, as this more spacious SUV has been designed to sit alongside the incoming second-generation GLA rather than replace it. What about the GLC? Mercedes still builds that too, but for reasons we go into below, Mercedes says that’s a different prospect altogether.

The core difference between the AMG GLB35 and its lesser siblings is the powertrain. It’s identical to other 35-moniker AMG models found throughout Mercedes’ compact ie. transversely-engined range, so rather than boasting AMG’s volcanic new M139 four-pot, it makes do with the decidedly more demure M260 2-litre unit. Still, the GLB35’s figures are strong, with a peak power of 302bhp between 5800-6100rpm, with torque peaking at 295lb ft, lower down the rev band at 3000-4000rpm.

Where the GLB35 differs from other 35s is in the drivetrain, switching to Mercedes’ new eight-speed dual-clutch transmission, which aside from the extra ratio for the sake of fuel economy, should sharpen the shift speed and response of the rather tardy seven-speed unit. With this combination, the GLB35 will reach 100kph in an easy and consistent 5.2sec, with the top speed pegged at 250kph.

Where the mechanical package starts to look somewhat limited is its efficiency, or lack thereof. Over two days of admittedly spirited driving, we barely managed 14.1L/100km (15.9L/100km to be precise) and although a more gentile driving style will unlock a more reasonable number, it’s still a rather shocking amount of fuel to use considering the performance output. Official figures quote a higher 9.1L/100km rating; we suspect this will be hard to match.

The GLB is partly an attempt to offer a more affordable family-friendly SUV package to market, and partly diversification of its compact car platform. It’s within 2cm in length of the GLC, but while that car borrows its longitudinal layout from the C-class and other large Mercedes saloons, the GLB’s transverse-engine compact car roots unlock much more space in the cabin.

Space is so vast that Mercedes offers an optional third-row of seating, but rather than lift the floor to reinforce the SUV-ness of it all, Mercedes chose instead to lift the roofline and open up the glass area with large upright windows emphasised by that kink in the windowline. The bizarre proportions haven’t been hidden underneath a swooping curvaceous body though. Instead, the design seems to double-down on its upright stance, with blocky rugged elements borrowed from the teutonic G-wagen, sprinkled with the usual AMG jewellery.

All-wheel drive is standard, but rather than for the sake of off-road ability (although with appropriate wheels and tyres fitted, it is hilariously capable scrabbling up and down off-road tracks), its relatively simple haldex-style front-wheel biased system makes for solid and consistent on-road traction, rather than any A45-like tail-happy exuberance. Adaptive dampers are standard, so too AMG’s latest unfathomable generation of drive modes within drive modes, but the biggest surprise lies in what it does, rather than what the GLB35 has.

That’s because the GLB35 actually drives really well… and not just for an SUV. The GLB’s manners are almost entirely due to its new-generation A-class underpinnings, so it drives largely like an A35 with greater mass stretched out behind and above it.

Where an A35 lacks the verve or detail in comparison to focused rivals in context, the GLB’s lumpen SUV rivals are nothing like as accomplished, making it a compelling option if the space requirements of an SUV are non-negotiable.

A substantial improvement is the new transmission’s clarity compared to the one fitted in an A35. Pull away from a stop and the electronically-controlled clutch actuation is swift and smooth, rarely jarring and never shudders. That crispness is equally present on the move too, with a swift input action from the paddles, putting to good use the engine’s liberal spread of power and torque. It definitely doesn’t feel as spritely as its smaller siblings due to the near-200kg weight penalty, but it’s still plenty of punch for everyday use, and it doesn’t feel any slower than rivals such as the Cupra Ateca or Audi SQ2.

Over undulating roads the ride remained composed despite our test car’s faintly ridiculous 21-inch wheel and tyre package, but final judgement is best left till we drive it in the region, as it feels marginal over broken surfaces or sharp intrusions. Body roll is well contained and the body control never unravels.

The limiting factor is driver involvement. The chassis is capable, but hardly engaging, with no sense that the rear axle wants for any attention other than to faithfully follow the nose through a corner. This front-led handling balance is to be expected in a car like this of course, but whereas sometimes the nose can be leaned on to extract even a subtle sense of attitude, the GLB remains benign.

The steering is another weak point of the driving experience, isolating the chassis beneath a numb, gloopy and sometimes downright unpleasant rack. Steering weight is variable depending on the mode selected, which run through Eco, Comfort, Normal, Sport and Sport+, but both are compromised, floating between light and vague, or syrupy and synthetic.

Still, pause for a moment after a spirited drive, gripping a familiar AMG steering wheel, looking at the same too-fussy digital interface and over a bonnet with tell-tale Mercedes twin-humps, you look back and remember there are five more headrests in your rear-view mirror. The GLB35 is a curious beast, odd in looks and execution, yet the breadth of its abilities speaks volumes for both the amount of progress some performance SUVs have experienced in the last generation.

Where we would consider the GLB35 ‘good’ for an SUV, but then suggest a similarly-sized estate or hatchback alternative better, the GLB’s unmatched practicality, even within the ranks of rival SUVs makes it a very capable, and curiously desirable package. It’s almost like it’s channeling the phantom Skoda Yeti vRS we all secretly wished was made.

If the optional rear seat bench is the GLB’s chief appeal, then its closest rival probably be the Skoda Kodiaq vRS. Like the Mercedes, it has a long, space-efficient quasi-SUV bodyshell, seven seats and some performance overtones, but with two key differences. First, its twin-turbocharged diesel is less powerful (but also far more efficient) than the Mercedes-AMG, and secondly, despite the Czech brand’s recent image turnaround, it still lacks the cachet of the three-pointed star.

Ignore the rearmost seats and the GLB35’s rivals are more prevalent, if not quite as commodious. The Cupra Ateca is close on power with 296bhp, so too its performance focus, but isn’t as accomplished or well finished as the Mercedes. Volkswagen’s new T-Roc R is similarly powerful, but a fair amount smaller. BMW’s X2 M35i and Audi’s SQ2 are in the same boat, but the less said about that pair the better.

So the GLB35 somehow finds itself in a sweet spot, capacious enough to justify its SUV body, but still proficient enough on the road to be almost entertaining. The catch might well be the price, at around $66,000 – a serious amount of money for a car on fairly humble underpinnings, and within spitting distance of more powerful and sophisticated SUVs like the $71,728 BMW X3 M40i. Cost may well be the GLB35’s compromise in a car that comes close to its goal of having none at all.