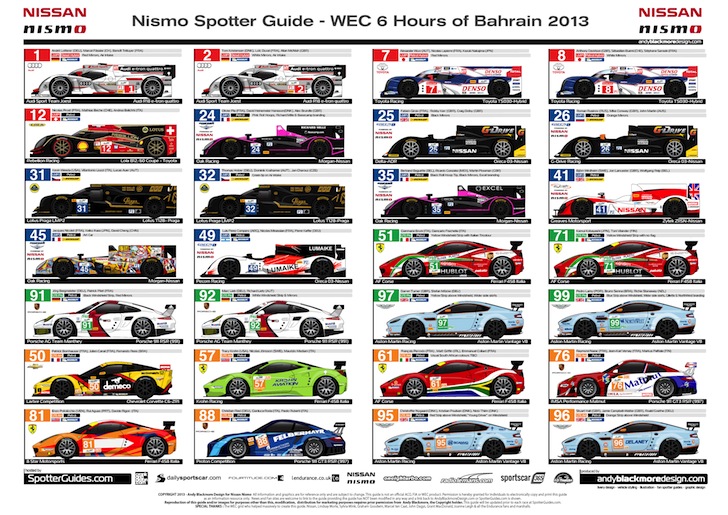 The FIA World Endurance Championship may already be secured – with Audi tying up the Manufacturers’ championship, and Allan McNish, Loïc Duval and Tom Kristensen the Drivers’ title last time out in Shanghai – but championships still remain open in the LMP2, GT and LMGTE Am categories ahead of the season finale this weekend in Bahrain.

Ferrari has announced a switch in its driver line-up for the 6 Hours of Bahrain, with former Formula 1 driver Giancarlo Fisichella now partnering Kamui Kobayashi in #71 AF Corse 458 Italia. The Italian’s regular teammate Toni Vilander will now partner up with Gulf 12 Hours winner Gianmaria Bruni in the #51 entry. Ferrari’s main opposition comes from current GT standings leader Aston Martin Racing, with Stefan Mucke and Darren Turner looking to make it a hattrick of victories at the Bahrain International Circuit in the #97 Vantage V8.

With OAK Racing set to seal the Trophy for LMP2 Teams, the fight is on between Bertrand Baguette, Ricardo Gonzalez and Martin Plowman in the #35 Morgan and Oliver Pla, David Heinemeier Hansson and Alex Brundle in the sister #24 entry. Aston Martin Racing’s Jamie Campbell-Walter and Stuart Hall meanwhile take on IMSA Performance Matmut’s Jean-Karl Vernay and Raymond Narac in the LMPE Am standings, the former’s Aston Martin Vantage V8 aiming for victory in the manufacturer’s centenary year.

Now we realise that’s quite a lot to take in. Fortunately Andy Blackmore has you covered with his latest spotter guide. Be sure to download the full-sized version HERE.