The Saudi Falcon’s Faisal Bin Laden looks ahead to the 2013/2014 Porsche GT3 Challenge Cup Middle East season, and explains why this year championship victory is the team’s main goal. 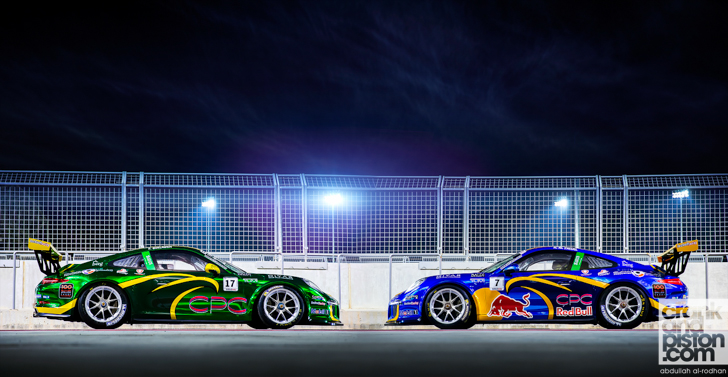 “To be honest, it doesn’t matter how many times we win as long as we win the overall championship. Yes, you want to win every single race, but if you can afford to finish second or third and still win the title then it’s worthwhile.”

It’s unequivocally clear what goals The Saudi Falcons and team principal/driver Faisal Bin Laden have heading into the 2013/2014 Porsche GT3 Challenge Cup Middle East. A tough season last year saw both the drivers’ and teams’ titles decamp to Al Nabooda Racing, something the Andy Blackmore-liveried Saudi boys in the blue and green corners are hoping to reverse. And while that may seem easier said than done, don’t forget that the team once again has on its books former Porsche GT3 Middle East champion Abdulaziz Al Faisal, a rejuvenated race outfit and strong local support. Plus, a brand new Porsche 911 GT3 with which the Falcons have spent time acclimatising during the off-season. 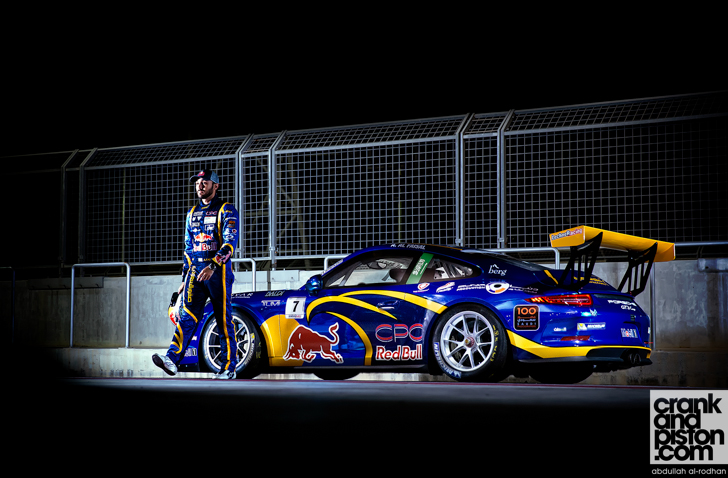 “Everything is new except the engine,” Faisal explains, referring to the Porsche’s 454bhp 3.8-litre flat six. “The new GT3 has a paddle shift gearbox, a wider stance and much bigger tyres, which are also grippier. The brakes are different too. It all makes the car easier to drive. With the longer wheelbase you get better balance and the paddle shifts make it extremely easy to downshift because you can keep both hands on the steering wheel. I think the car is a second or even a second and a half faster over last year.

“Of course this is the first batch of GT3s to come out, so obviously you get a few teething issues. We’ve found with the gearbox that there when you downshift and the rev limiter hits over the redline, it will not shift until you slow down. Thank God we did pre-season testing because we have had a few issues with one of the cars, probelms we would otherwise only have found out during the first race. That would have been disastrous.” 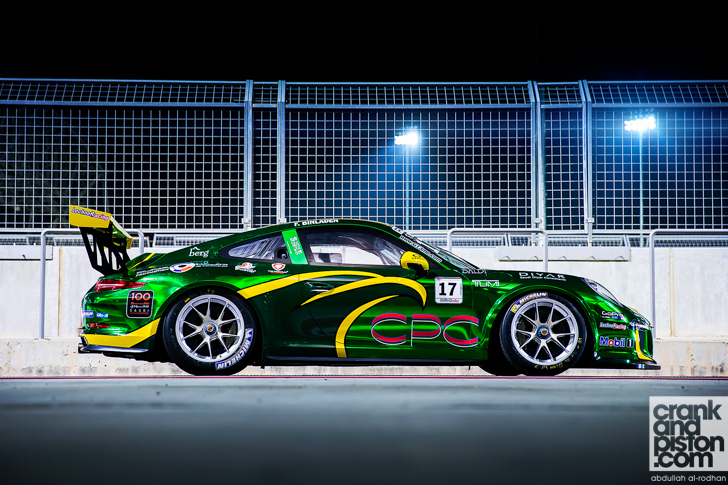 Despite the hours being put into pre-season testing with the new GT3, question marks still remain heading into this weekend’s season opener at the Bahrain International Circuit. Arguably a fuller entry list – a shot in the arm for the series, now in its fifth year of competition – across a six-round calendar makes podium and points paying positions even more difficult across the Gold, Silver and Bronze Michelin Trophy categories (which range from full professional to gentlemen drivers, depending on each individual’s experience). Faisal in particular goes into the new season with a lot to learn. Following two years out of the series, coupled with the occasional bump early on in the 2012/2013 season, a more consistent second half to the year took Faisal ahead of nearest Silver Trophy rivals Mohammed Mattar and Zaid Ashkanani and on to overall category victory. En-route, he even managed to collect a couple of outright podium finishes, the high-point being second place in Qatar. This season though he steps into the Gold arena alongside ATF, and while the learning curve will be tough, the Saudi is still confident of success.

“Last season I took second and one third overall, so this season I am looking to improve that: hopefully most of them will be on the top step! Being realistic, it won’t come from race one, but I’m sure hopefully it will come from races down the line. It’s a motivation. I’ve made a point, I’ve won the Silver Michelin Trophy and now I want to win the biggest prize. 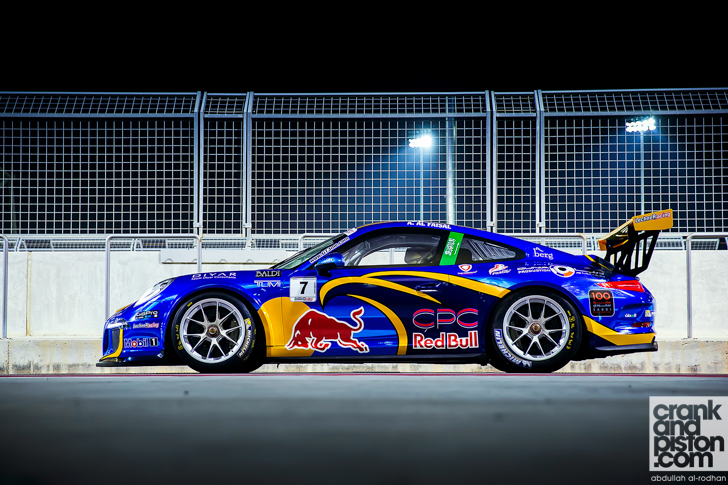 Teammate Abdulaziz (nay ATF) meanwhile has the same mountain to climb as last season, albeit from one place further down in the standings. A strong opening half of the season produced two wins from the first four races and temporarily gave him the standings lead. A resurgent Clemens Schmid and a spectacular barrel roll at round four on home turf however put paid to ATF’s championship aspirations. Faisal is confident though that his teammate can still get the job done.

“Unfortunately ATF had a big roll in Reem, and that effectively lost him the championship,” Faisal explains. “We couldn’t get hold of another car for the next race and we couldn’t fix ATF’s, so we had to go back to his old car. That made it difficult for him to catch up and continue. But Abdulaziz is a fantastic racer and we all know what he can do. He’s always a threat.”

The biggest blockade on the road however remains Al Nabooda Racing. Off the back of his season closing victory in Bahrain, Karim Al-Azhari will be looking to keep up the momentum, especially against his younger teammate. Schmid, as the current Porsche GT3 Challenge Cup Middle East champion and fresh from a season in Porsche Mobil 1 Supercup, will be hitting the ground running in Bahrain, a venue at which he took double victory at last year’s season opener. From the Falcons’ perspective though, the Austrian is just another ‘moving target’. 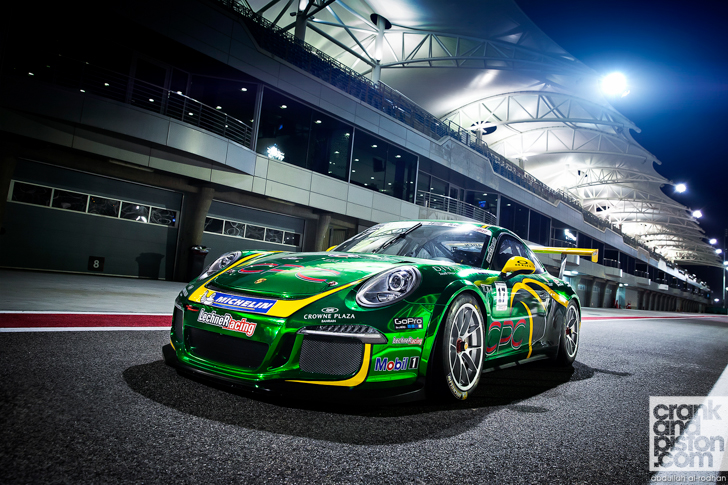 “Clemens is a very strong driver, and he knows the car very well so we are looking for his weaknesses. Karim is learning the car and I think together they make very tough competitors. At the same time we have a new team entering the series, the Skydive Dubai Falcons [comprised of Sheikh Al Maktoum and Saeed Al Mehairi], and that means another two moving targets around us, which makes things exciting.

“The main reason we race is to have fun, but we definitely want to get our title back. If we can manage to get both titles at the same time against this level of competition, then that would be the icing on the cake!”