Record-chasing electric racer turns a wheel on the Pikes Peak course for the first time, ahead of the race on June 24, 2018

With the “race to the clouds” now just a few weeks away, the famous hillclimb has now opened for testing, and Volkswagen has wasted no time dropping Le Mans-winner Romain Dumas in the ID R’s driving seat.

The team’s goals are clear. Volkswagen wants to wrest away the existing 8min 57.118-second electric course record set by Rhys Millen in his eO PP100 racer in 2016. Whether the ID R will get close to Sebastien Loeb’s stunning 8min 13.878-second time though is another matter, but the car’s electric powertrain does have advantages on the twisting mountain course.

671bhp, 479lb ft of torque and a sub-1,100kg weight are the startling stats posted by the VW ID R, which is said to be capable of sprinting from 0 to 100kph in 2.25 seconds. Unlike the combustion vehicles that also compete at Pikes Peak, the ID R’s figures won’t deteriorate as the air starts to thin with altitude, so Dumas will have as much power under his right foot on the last corner as he had on the first.

The car certainly looks dramatic as it fires up the mountain, the LMP1-like form quite unlike most other cars we’ve seen competing in recent years. For Dumas, the silence and lack of gearchanging is also novel – but in the video he praises the car’s rocket-like acceleration out of corners.

Our first opportunity to lay eyes on the VW ID R in the metal served up few surprises. By and large, the aesthetic previewed by previous renderings of the car has been carried over but the ID R now looks race-ready, clad in its grey livery.

Colour scheme aside, the biggest differences between the computer generated images of the car and the finished version are a collection of aero elements. New winglets, supported on stanchions, have been added to the front splitter, which itself no longer wraps up around the front apron.

More aero-honing has delivered the louvered arches and the air inlets located behind the curved windscreen, which will reduce lift and increase cooling capacity respectively. The rear wing is mounted differently from the one on the initial images, too. 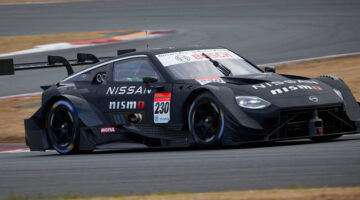