It can’t have escaped your notice that there have been some major rumblings at Volvo as of late. As well as concerted attempts to take on the BMW 5 Series with the brand new S90 and ever increasing hints at autonomous driving (Concept 26, anyone?), there’s now a heightened focus on performance, given that Polestar – for years the aftermarket support – is now officially under the Volvo umbrella. Free from its former Ford parentage, a newer, more fuel efficient engine family as well as lighter and more stable platforms has elevated Volvo’s credibility in the market, as well as its on-road capabilities. With renewed vigour, the design department has taken a strong stance for its upcoming 2017 models, ‘Thor’s Hammer’ DNA evidence that the Swedish team has seen one too many Marvel movies, but is also gunning for the same ‘premium’ tagline as its principal rivals in Germany. All of which is starting to yield results: last year Volvo leapfrogged the half million sales mark worldwide for the first time in its 89-year history.

Given both the above and the company’s ever-growing presence in the Middle East therefore, and with several test-drives of the company’s latest flag bearers already under our belts, ‘piqued’ our curiosity most certainly was to take a more in-depth look at Sweden’s last remaining car brand. Said look will cover the next three months, and takes the form of the V40 hatchback, Volvo’s second highest selling model worldwide since the name was revived in 2012. If you’re curious to know what number one is, it rhymes with Hex Sea Flighty… 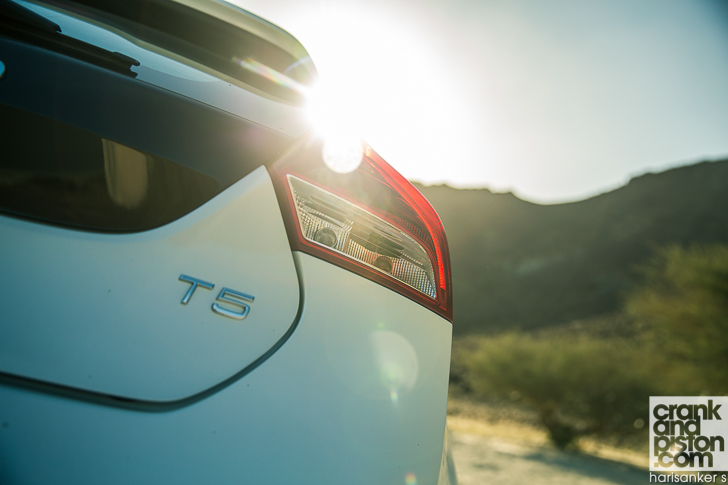 Don’t let the R-Design badges fool you, for although this adds a degree of sporting flare – check out the R-Design sports seats, silver front grille and 17in ‘Ixiom Diamond’ alloys – there’s little in the way of mechanical grunt. The ‘V’ is still very much about ‘Versatility’ on our latest long termer.

Peel back the airflow-optimised bodywork and you’ll find a 2-litre turbocharged T5 four-cylinder, which packs not only a handy 245bhp and 258lb ft of torque, but also a speculated 5.9L/100km fuel efficiency potential. We’ve yet to put (Thor’s) hammer down just yet, but are intrigued to see which side of this particular divide the electronic power assisted steering and eight-speed automatic gearbox will land on the V40. Driver assistance technology is also rife, courtesy of cross traffic alert, road sign recognition and ‘City Safety’ automatic braking. And those of you who’ve seen THAT Volvo Trucks emergency stop YouTube video should appreciate how confident we are in the latter.

Long term readers might also have noticed something else though: since crankandpiston.com first arrived in 2008, Volvo has never made an appearance. There too lies a completely different arena for both the Swedish marque and the V40 R-Design to make some major rumblings.