Dear Lord this thing is comfortable…

True, leather seats during Middle East summer was perhaps not the wisest of moves, but that ‘calamity’ aside, the ride comfort in our long term Volkswagen Touareg has caught almost all of the crankandpiston.com team off-guard, such is the suppleness of the damping. There’s also bags of head and legroom, deep armchairs to fall into, and a truly cavernous boot that could swallow a camel (hey, we’ve seen weirder things in Dubai). Nor is there a rage-inducing infotainment system, which proves mercifully straightforward to use in the Touareg. Issues we’ve suffered this month following the SUV’s arrival last month almost seem too trivial to note. But we’re going to. It’s kind of our jobs.

Don’t get me wrong, the faux-veneer detailing on the centre console is a particularly handsome touch. Alongside the rotary dial though there’s a small hole in the console, presumably where the dial would slot for right-hand drive markets. It’s hardly a major thing, but unless you’re partial to driving to work with an espresso shot glass, there’s very little use the hole has other than making the design look awkward. Would a plastic covering really have cost that much in the long haul considering the Touareg is VW’s most popular selling SUV? Correct me if I’m wrong Volkswagen, but there also doesn’t appear to be a USB port within reach of the driver, Volkswagen instead opting for a bespoke wire and connectors in the dual-split centre armrest. Fine in theory, but this will leave you kind of screwed should said wire go missing. 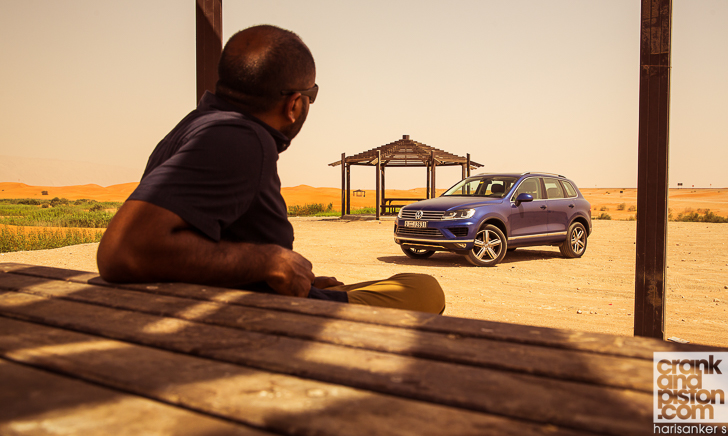 As I say though, trivial matters one and all, for not only is the Touareg immensely comfortable and practical, it’s also surprisingly nimble. The punch from that 280bhp 3.6-litre V6 and swiftness of that DSG seven-speed transmission is such that you could genuinely call the Touareg ‘nimble’ without sounding overly wanky in the process. Keep the speed up through the long-sweeping corners and not only is there consistent weighting in the power-assisted steering but there’s also far less lean than you might reasonably expect from a 6ft tall SUV. Solid if not spectacular stopping power too.

So far our excursions onto the rough stuff have been limited, the Touareg more often than not the mining canary sent into the wilderness to check the soft sand for our other featured cars (the Lamborghini Huracán LP 580-2, for example). A job that, much like the others listed above, the big VW passes with flying colours. Don’t expect the mileage to dip any time soon over the next few months.

Right, time to head to work. Anybody got an espresso shot glass I can borrow?