Volkswagen Golf R vs BMW M135i vs Mercedes A 45 AMG

Since the early 2000s, the Volkswagen Golf R has reigned supreme as king of the Hot Hatches. But are the BMW M135i and/or the Mercedes-Benz A 45 AMG about to change all that? crankandpiston.com pits all three against each other in another titanic group test.

Two generations of the R32 were all it took to cement the latterly named Golf R’s legendary reputation in the early 2000s. Devoid of ghastly bodykits, racing stripes and hilariously oversized aftermarket alloys, the R took what made the Golf one of the best handling hatchbacks on the market, tweaked the power, improved the handling and stayed true to a ‘less is more’ design philosophy to up the ante yet more. In doing so, ‘the R’ became an undisputed king of the Hot Hatches, an accolade it still holds today.

Indeed, when the new fourth generation R was unveiled last year, it showcased a newly developed 2.0-litre TSI four-cylinder, now producing 276bhp and 280lb ft of torque, and in the process became ‘the most powerful production Golf ever’. It was a statement underlined by impressive performance figures: the new 4th gen R was 0.4s quicker to 100kph than its predecessor and more than a second faster than its sister GTI, which shared the same engine. On top of this came new all-wheel drive system, a lower ride height, better weight distribution, revised sports suspension and an updated six-speed DSG gearbox. All signs pointed – as we discovered on its regional debut – to a model that had once again set the benchmark for performance hatchbacks.

Unsurprisingly, Volkswagen’s rivals were keen to prove them wrong, which brings us to our German trio here today. 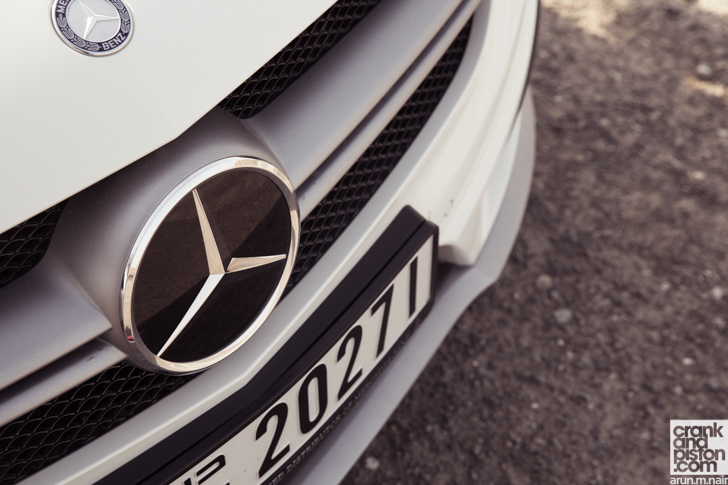 In the white corner from Stuttgart we have the Mercedes-Benz A 45 AMG, the third generation of the company’s entry level A-Class and the first ever compact model to receive a performance upgrade from Affalterbach in the latter’s near 50-year history.  At the heart of the A 45 is Mercedes’ established 2.0-litre twin-scroll turbocharged four-cylinder, ‘the most powerful series production four-cylinder in the world’. Champing at the bit is 355bhp, 147bhp more than the A 250 Sport on which is based and 79bhp more than the Golf R. And while lunatic power is what we expect from AMG, the A 45 also brings with it a high-performance cooling system derived from the SLS AMG, an updated DCT seven-speed sports transmission, sports suspension and steering, and an updated all-wheel drive configuration 25% lighter than any of its rivals, all designed for improved road holding, sharper gear changes, and a more responsive throttle. While ‘less is more’ is the hallmark of the Golf R, more is most decidedly more with the A 45 AMG.

And then there’s our final combatant in the M-coloured corner, a 2012 BMW M135i. And that ‘M’ moniker needs an asterisk: the 1M Coupe – and latterly the M235i – remain BMW’s entry level M models, meaning Munich’s representative today is the slightly less-sportily honed M-Performance 1 Series. Don’t let the rather garish livery fool you though, since the M135i still brings some serious punch to Das German shootout. Although bested by the AMG in terms of outright power – 316bhp to 355bhp – both boast the same 332lb ft of torque figure. BMW’s established 3.0-litre TwinPower Turbo six-cylinder is also the largest engine of the three, and while this could hinder the Beemer’s dynamism, a lightweight – yet performance-savvy stiff chassis – means the M135i tips the scale 50kg lighter than the AMG. Into the mix is also thrown an eight-speed Steptronic automatic gearbox, M-spec suspension, an aerodynamically optimised bodyshape, and a 4.9s 0-100kph time. Don’t count out the old school player just yet…

So, three heavyweight contenders, one crown. Will the fourth generation Golf R retain the crown it has held for the best part of a decade, or is one of its more powerful adversaries ready to whip the rug from beneath its Bridgestones? 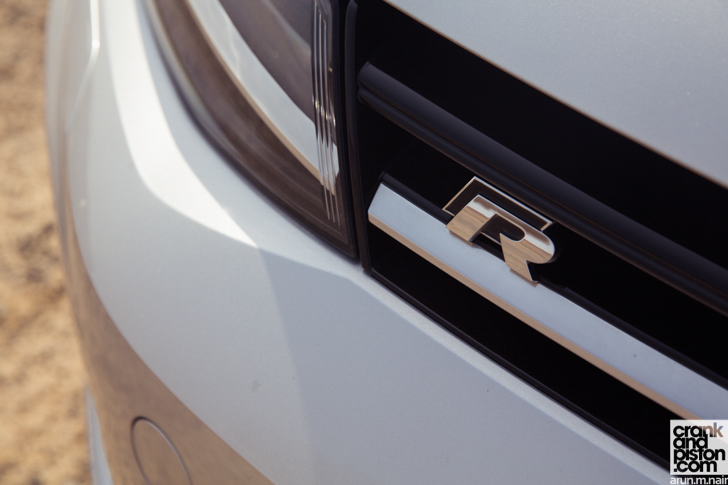 Ironically, despite this Hot Hatch shootout offering plenty for debate, my first argument with crankandpiston.com’s digital team is over our photoshoot location. I’m keen to test the AMG’s 228bhp/ton figure (7bhp and 41bhp more respectively than the BMW and the Golf), so winding mountain roads and sharp hairpin bends consequently top of my list for this afternoon’s drive. The digital team though – fresh from a weekend of Group B rally YouTube video marathons – are adamant that loose shingle is the way to go for some dramatic ‘sunset through the dust’ shots. It’s an argument that consumes an impromptu lunch break and the time of passing pedestrians, but eventually we hit a compromise. Since two of our contenders are all-wheel drive, going off-piste for an hour or two will probably be okay, but I insist we take the back roads to get Das Germans warmed up first. The cloud of dust left by the AMG on point suggests they team is happy with that arrangement, and once I’ve cleared the grit from my eyes, I set off in hot pursuit in the Golf R.

In typically understated VW fashion, there’s little that smacks of vulgarity. There’s a couple of ‘R’ badges on the headrests and multi-function steering wheel, a ‘DSG’ embossed gearlever, keyless start, and a ‘4MOTION’ reference on one of the storage bins, and that’s about it: even the leather-clad sport seats look inviting. It’s a similar story on the outside where GTI and R32 lineage is found through slightly larger air intakes in the front bumper, a modified radiator grille, chrome-capped door mirrors and 18-inch ‘Cadiz’ alloy wheels. It’s a fundamental part of the Golf R’s character that function takes precedence over pomp and tinsel. There’s plenty of head and legroom for instance, bags of visibility regardless of which shoulder you look over, and stylish carbon-touch inlays for top-rate build quality, all to be enjoyed whilst hurtling towards 100kph in a flat five seconds. No discussion: the Golf R is easily the best looking of the three. 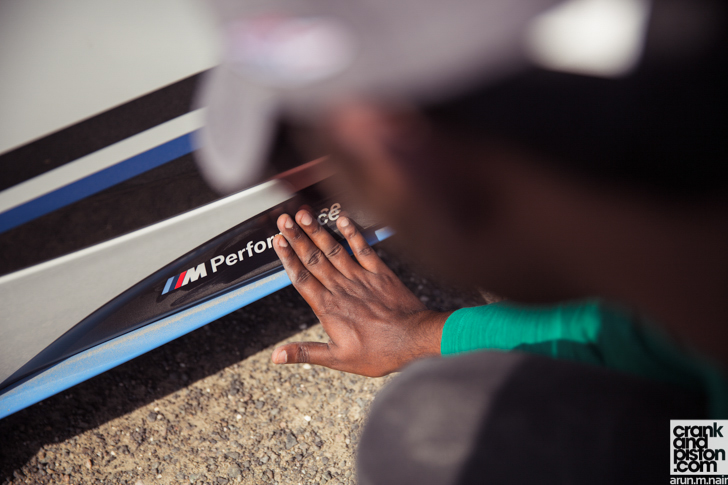 A few years ago I owned a BMW 1 Series (diesel for my penniless sins but M-Power as a saving grace), and while many derided the ‘bread van’ look, there was just enough oomph about the bodylines to win me over. One generation and a makeover later though and a pinch here, a tuck there, and frankly a bit of a mare at the design easel. Attempts to make the 1 Series a little more aggressive, BMW in my eyes have gone a bit overboard, the resultant narrow front end now looking a bit awkward for my tastes. The less said about the revolting livery the better…

A couple of wrong turns en-route gives me time to look at the Beemer’s cabin, where unfortunately things don’t get much better. Our test model seemingly boasts the full options list, right down to the red leather, carbon fibre-look trim and Alcantara-lined steering wheel and dashboard. There’s a couple of ‘M’ badges dotted about, which partner the M colour stitching on the steering wheel nicely, as well as the rotary dial for BMW’s infotainment system, cavernous cupholders and various other buttons and switches. It’s all beautifully put together but feels a little overwhelming, especially in a cabin designed around the driver. Bewilderingly, in a group test that also includes an AMG Mercedes, the BMW is the showy one. I hadn’t seen that coming…

Nor had I anticipated just how comparatively understated the Mercedes would be. Unlike our last A 45 test model, there’s no rear wing, no front splitter and no racing stripes, replaced with a light sprinkling of chrome detailing, twin-spoke Titanium Grey light alloy wheels, and only a few ‘AMG’ badges on the fenders, the tailgate, the door sills and the headrests (the powers of restraint at Affalterbach must have been enormous that day). More pronounced bodylines and an bespoke front grille make the AMG slightly beefier in appearance than either the R or the M, but it’s a good look, a far cry from the ‘cutesy’, top-heavy 1st gen A-Class. It’s also pretty sharp on the inside, either though to my mind the red seatbelts and air vent surrounds is a little too ‘funky’. Small points though, since the cabin does look excellent once we pull over and swap cars, I now taking the Mercedes key. 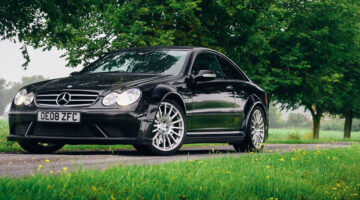