It’s time to say farewell to The Management Fleet Volkswagen Beetle. In crankandpiston.com tradition, this usually entails a round-up of the last three months activity, a congratulatory nod to the features that impressed us and a derogatory reference to those that did not, and a final ‘yay or nay’ statement regarding whether our time together was well spent or not (which in this case is a yes)

With the Bug though, things didn’t go quite to plan this month.

It’s 10pm at our local petrol station, and the Beetle – fresh from a soak and a dry – is being given the works on the inside ahead of the final photoshoot before its return. Wash completed and our thanks given to the dutiful attendants, and the Bug – which has been kept running throughout the procedure – is back on its way. That is until we get 200m down the road, when a warning light appears on the information screen: ‘key not found’. Bugger it. Must have left it on the counter when we were in buying a coffee. We’ll have to turn around.

But here’s the slightly nerve-jangling problem. We’ve already hit highway. An immediate u-turn is out of the question and there’s at least 500m to go before our next junction, plus the time taken after that to actually turn around. None of us know how far the Volkswagen will go before all four-cylinders– sans key fob – decide to switch themselves off. Is it a couple of kilometres or have we mere inches to make a decision? We just don’t know. 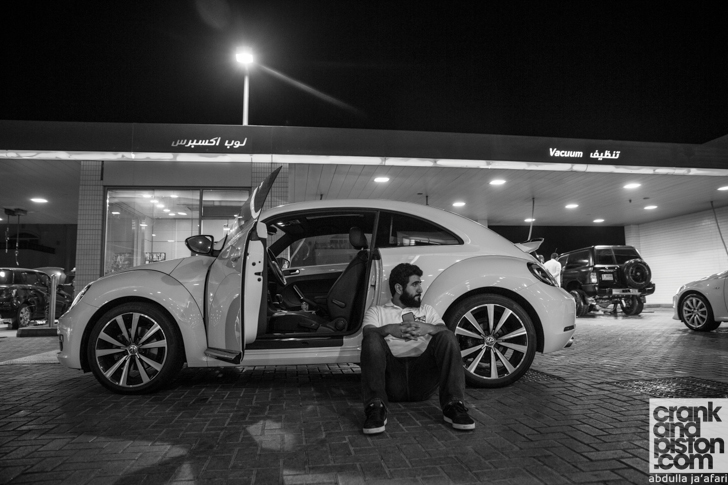 Fortunately the VW plays ball and decides not to conk out on our way back to the petrol station. The key fob however is still nowhere to be found. Not on the counter, not in the waiting room, not accidentally discarded on the forecourt. We empty and re-empty our pockets several dozen times asking the same of the car wash attendants, and still nothing. We’re baffled.

Then an idea springs to mind. A large industrial strength vaccuum is used to clean the upholstery in the cabin, the nozzle for which is just big enough to swallow a key fob should said item have been left in the centre cupholder without anybody noticing. It’s a sound hypothesis, but one that leads to further problems. To find the key itself requires taking the vacuum apart, something that is just not possible with this many customers waiting. We’re finally reunited with the Bug’s key fob – from within the vaccuum – a full two hours after we’d originally noticed it was missing. All because we left the car running whilst it was being valeted. Lesson learnt.