Today’s muscle car scene is dominated by the Ford Mustang, the Dodge Challenger and the Chevrolet Camaro. But four decades ago, one car – and one film – captured the public’s imagination. And our deputy editor has been driving it

Were you aware that Smokey and the Bandit was a secret guilty pleasure of Alfred Hitchcock? Or that The Bandit’s real name is only uttered once throughout the movie? Or that only Star Wars Episode IV grossed more at the theatres in 1977?

Well come on. It’s a Pontiac Firebird. Did you really not expect me to make any reference to the Burt Reynolds classic? And yes, I’ll give you a second to stick on some Jerry Reed…

Much like the DeLorean DMC-12, the Pontiac Firebird Trans-Am holds cult status today thanks largely to one hugely popular movie franchise, when truth be told, there’s much more to General Motor’s famous pony cars than that. In 1967 for instance, the Firebird made its debut based on the chassis of the first generation Chevrolet Camaro, just one of several affordable, high-performance models – including the Dodge Challenger, the Plymouth Barracuda and AMC Javelin – fascinating American audiences during the late 1960s, thanks largely to their striking, muscular designs and high power output (the original Firebird boasted an engine range encompassing everything from a 165bhp 230cu to a 325bhp 400cu V8). To homologate its entry in the SCCA road racing series, Pontiac also debuted the Firebird Trans-Am in 1969, an altogether flashier model with a dual intake hood scoop, fender vents, larger tyres and lowered suspension for improved handling.

Both the Firebird and the Trans-Am proved so successful that by 1970 (and following some subtle revisions to the design) a second generation was ushered in, a range that would last 11 years and longer than any other Firebird generation. With the convertible eliminated and the ‘coke bottle’ design gone the way of the dodo in favour of a more swooping, aggressive design, the second gen introduced revised suspension and a new stabiliser bar for improved handling, a front bumper now made from moulded rubber for better weight distribution, and to meet mandated road safety regulations, a revised front grille that would later morph into the hallowed ‘Batmobile’ look. Alongside this came a new engine range, the base model of which now featured tech from Chevrolet. Momentum seemed to be on the up.

Issues however begin to rise as the years ticked by, courtesy of ever-more stringent emissions regulations and a lacklustre reception from American audiences: the high-performance Super Duty 455cu V8, first introduced in 1973, was gone just two years later, and the Firebird itself – following poor sales a year earlier – was nearly dropped altogether in 1972 as the muscle car craze appeared to be coming to an end. The ‘screaming chicken’ atop the bonnet in 1973 was enough to cement the Firebird’s legacy, but was still not enough to keep the public interested. 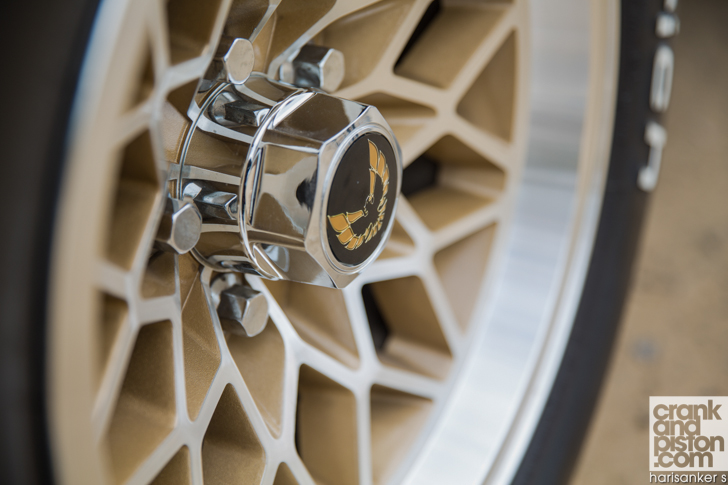 Then along came director Hal Needham, and one of film history’s most famous (and popular) car chase films, Smokey and The Bandit. Overnight Burt Reynolds was a star, Mike Henry’s NFL career was forgotten (he played Junior Justice, just FYI), and the Firebird was a success again: following the re-introduction of the T-Top, GM sold 187,285 units, including 93,341 Trans Ams, its biggest ever year for
the Firebird.

Which brings us to 1979, the year the model you see above rolled off the production line. Unlike all three Firebird’s destroyed during The Bandit’s chase though, this example – graciously donated for this feature by custodian Eric Varah – has enjoyed a sheltered upbringing. Originally from the mid-west, the ’79 Trans-Am arrived in the Middle East only a couple of years ago boasting only two previous owners, near 100 per cent originality (save replaced brake discs and a couple of plugs under the bonnet) and rare Atlantis Blue paint. Even despite its 36-year lifecycle, there’s ‘barely’ 135,000km on the clock.

And crankandpiston.com was invited to take it for a spin. An offer we weren’t about to turn down.

It’s the above history, plus SO many Sheriff Buford T Justice quotes, that run through my head as I’m being introduced to the Trans-Am by Eric, following a meticulous detailing service at Select Nano UAE. At first. That is until I plop myself into the quilted driver’s seat. Sweet Lord, these are comfortable: I fell into it five seconds ago and I’m still sinking. Typical for a 1970s pony car, the cabin is beautifully simple – and colour co-ordinated – the most tech heavy items being the ultra thin three-spoke steering wheel and automatic gear lever, an eight-track (anyone below 25 years old may want to google that) almost perilously delicate windscreen and indicator spindles, plus gauges for oil, engine and water temperature. There’s a magnificently Americana feel to these retro proceedings made all the more nostalgic when I turn the key and fire the engine into life. 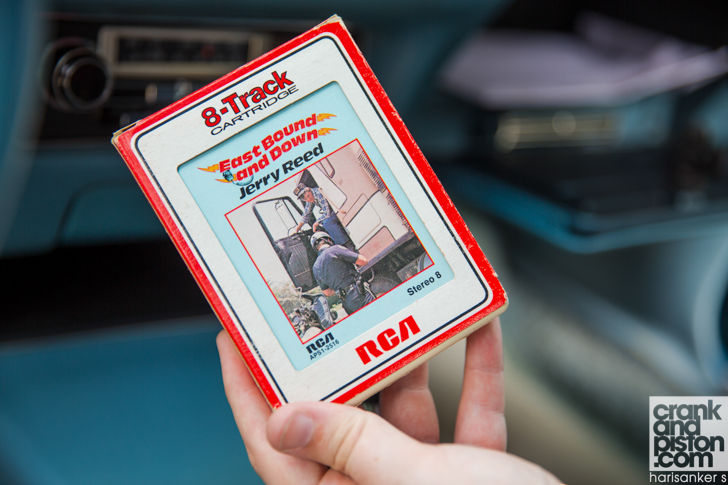 It’s a good sound. It’s not overly aggressive in an AMG kind of a way or subtle in its basy tone to suggest underlying drama in the high revs. It’s just a GOOD sound, one infused with 1970s Americana and one that emphasises the gulf between latter day pony cars and their modern day equivalents, rather like the drive itself as I later find out. It’s no surpise that I’m keen to get underway quickly and begin rallying the rest of the crankandpiston team. I spend my first few moments – in my best Jackie Gleeson voice – explaining why each sombitch needs to get in the car before I punch each their mommas in da mouth. Perplexed looks are understadable but not exactly what I expected….

Fortunately the looks of the Firebird – once we’re underway – get a more positive response, and for very good reasons. The Firebird is still a stunningly handsome design, all presence thanks to its wide stance, taillip spoiler and square quad headlights. And of course, THAT Firebird decal on the hood. People gravitate around it even when it’s standing still, and particularly when the engine is given a poke of right foot. I can’t help but smile as the bonnet scoop banks to the left as the revs go up, a stark reminder of the drama involved with 70s muscle cars. What I wouldn’t give for a Stetson right now…

It’s with considerable caution though that I ease my way into traffic: Eric has graciously opted against telling me the car’s value, saying only that – like most Firebirds today – it continues to grow with each passing year. Chances are I’ve driven more expensive supercars than this, but it’s the originality that makes it so precious: there are still stickers in the engine bay intact since the car’s build. As for that matter is the engine. And the exhaust. And the bodywork. And the windscreen. Not. A. Single. Scratch. James.