Yes, we know. It’s not the most ‘crankandpiston’ of cars. But the new ‘bold’ Toyota Prius might just be one of the most significant models in the motoring world today. What better time for a long term loan?

In a beauty contest our latest long-termer would highlight either a lack of judgement or an overwhelming sense of self-confidence. But there is no question that the Toyota Prius is one of the most important cars of the 21st century to date.

As the first mass-market hybrid upon its arrival in 1997, the Prius established itself as ‘the future’ of a greener, more efficient form of vehicular propulsion, and while it’s now seen as THE accessory to have if you’re in, from or just passing through Los Angeles, Toyota has been keen to emphasise that its ‘bold’ (hmmm) fourth generation model is still all about efficiency. There’s a new, more rigid platform for starters – the snappily titled ‘Toyota New Global Architecture’ – designed to lower the centre of gravity and offer more ‘dynamism’ and aerodynamism. More significant though is the heavily revised powertrain. The batteries now carry more charge, a smaller 53kW electric motor reduce weight without sacrificing power output, and there’s a new 1.8-litre four-cylinder too kicking out 97bhp.

As well as potentially improved handling – and yes, we’ll come back to that over the next few months – Toyota also claims a theoretical range of 900Km from a 35-litre fuel tank is something to raise an eyebrow about in the gas-guzzling Middle East, especially in the summer. So this is a true test for the Japanese automaker. After all, June can get a bit toasty, with temperatures rocketing above 40 degrees across the month. Consequently the demands on air conditioning tend to be on the heavy side, and we can already report – just a few days after receiving our new Prius – that, even in full ECO mode, the cabin can get chilly very quickly. Big tick there then, even if this might take its toll on that 900km(ish) fuel range. 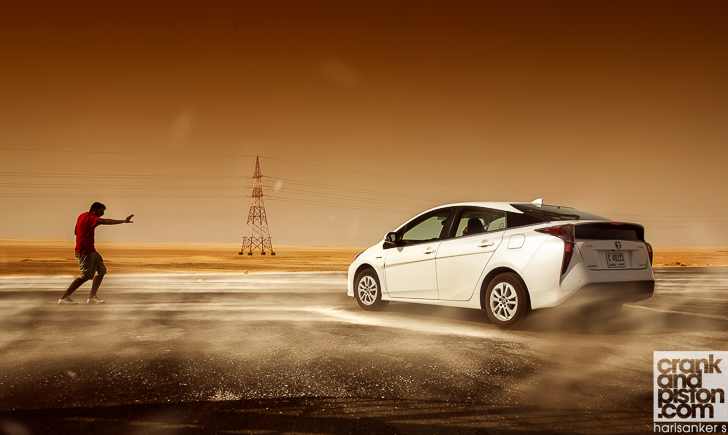 There are a couple of things Toyota has mentioned to us about the car ahead of its two-month crankandpiston.com tenure, it’s target audience being one of them: with the Prius making its regional debut after a near-20 year break, it’s no real surprise Toyota is targeting ‘young trendsetters’ to make up the bulk of its customer base. Also, unlike its predecessor, the fourth gen hybrid is completely computerized, which could cause a hiccup or two here and there: we’re advised to wait a few seconds after start-up for example before selecting ‘Drive’, as this could cause the hybrid system to freeze whilst it catches up. Whilst there’s always the ‘switch it off, switch it on’ approach to fall back on, we’ll be keeping an eye out for that over the next couple of months.

Now, you might have read all that and thought, “well, yes David, but it’s still a Toyota Prius. In the Middle East”. While this might not be the kind of car we’re used to testing in the long term, it doesn’t lessen the significance. I’m reminded of the gentlemanly fracas between Bill Gates and General Motors a few years ago, where the Microsoft boss claimed the industry should be able to make cars capable of 1000 miles (1600km) to the gallon for around $25, the latter in turn responding that the car would crash at least twice a day. It was an apt focus of intent that Microsoft started cooperating with Ford after that. What we could have here with the fourth generation Prius, legitimately, is the future of motoring.

And that’s not just hyperbole. Consider the cost of fuel today, plus that theoretical 900km range, and how much the Prius would cost in the long run compared with segment rivals like the Honda Civic, Hyundai Elantra and the Nissan Sentra. Enticing prospect, isn’t it?