We bid farewell to The Management Fleet Toyota Land Cruiser VXR this month, but not before we offer our thoughts on the handling

Okay, I can’t put this off any longer. After two months of discussing practicality and bold new looks, it’s time to talk about the way our long term Land Cruiser VXR drives.

Let’s start with the positives. The ride quality, despite a few creaks and groans working their way through the dampers on the more rutted sections of tarmac, is actually pretty good. It’s not up there with the best from Mercedes, granted, but given that the Land Cruiser’s $90K(ish) price tag – including top of the range VXR premium trimmings – is still two thirds south of the ballpark figures being kicked out by Munich’s favourite three-pointed star it’s a mighty accomplishment.

Similarly on the rough stuff, we hadn’t expected an SUV that’s heavier than the fourth moon of Jupiter to handle the dunes as determinedly as it did. Yes, true off-road fanatics will find the Jeep Wrangler a more nimble and chuckable piece of kit, and our travails into the undergrowth were fairly limited (the prospect of pushing the fourth of moon of Jupiter was not a tempting one). But again, a decent 362bhp and 391lb ft of torque being offered from deep in the rev range means that, with a bit of encouragement from the right foot and a decent run-up, the 5.7-litre V8 could hold its own comfortably on the dunes, bastion of most Land Cruiser owners no doubt.

But what of its capabilities on-road? Well here’s where the picture changes. 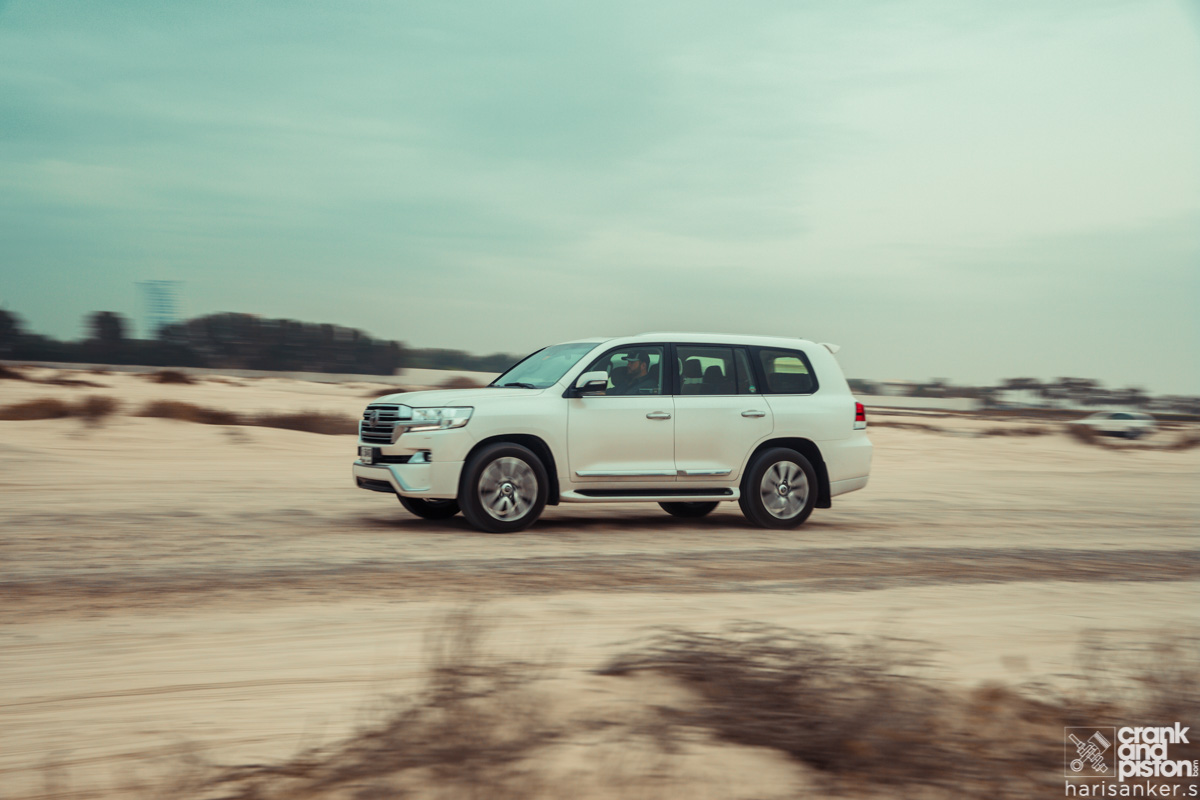 Impressive as those massive brake discs are – with plenty of feel through the pedal – stopping distances in the 3350kg Land Cruiser VXR are vast, so planning ahead is a necessity. Carry too much speed into a corner, and you’ll find the nose – with the weight of that massive V8 over the front axle – dip sharply away from you, and while there’s plenty of grip through the tyres, you’re more likely to find the front end skidding out from under you than trail-braking the Land Cruiser back under control. Word of advice, try to avoid pressing your knees into the console in this situation, as the position of the power tailgate button is easy to catch if you’re not paying attention. The top-heavy nature of the Land Cruiser means understeer and lean is ever-present. Long story short, hustling the Land Cruiser by the lapels is not a particularly good idea.

Is that a fair conclusion to our long-term loan? Not really. It’s unlikely most new Land Cruiser owners will tread anywhere near ‘the limit’ when it comes to cornering, and while it’s top-heavy, less than agile handling is still something to bear in mind, it’s hardly a fatal blow. Yes, fuelling the mighty V8 and its 3350kg entourage can get expensive over time, and practicality – including a too-tight third row and sometimes awkward split tailgate – can sometimes prove laborious. But it’s unlikely to knock the ship of the desert from the top of Toyota’s regional sales figures. It’s capacious, it’s comfortable, its price tag is considerably lower than others of similar premium ilk, its V8 has admirable guts, and it has some serious presence both on the road and off it. Time for an EXR now?

You can check out more of Management Fleet updates HERE, and more Toyota stories HERE