THROWBACK THURSDAY. Following Alexander Rossi’s shock victory at the Indianapolis 500 at his first attempt, we take a look back at Hélio Castroneves’ race in 2001, the last rookie to win his inaugural Indianapolis showing 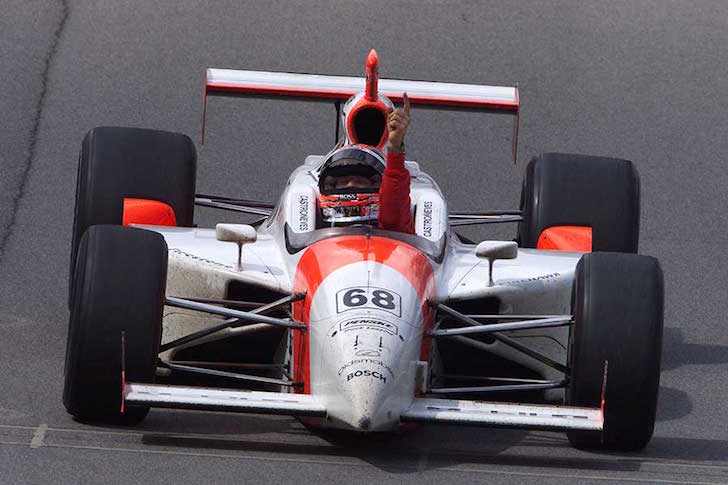 Given that his Formula 1 career had been a brief and largely ignominious affair, nobody could deny Alexander Rossi his moment in the spotlight after taking a shock victory this past weekend at the Indianapolis 500 in only his career start in America’s lead single seater series. Hard to imagine how the buttermilk could have tasted any sweeter under such circumstances.

Indeed, a debutant taking victory in the most blue ribbon of single seater events is so rare that it’s only happened nine times in the event’s 100 year history, making Rossi’s fuel-straining run to the flag all the more memorable. And while certain rookie achievements stand out for this week’s Throwback Thursday – Paul Tracy’s near miss in 2002 and AJ Hildebrand’s final corner collision amongst the most notable – we’ve instead opted for Hélio Castroneves’ first of an eventual three victories at the Brickyard, a record that places him behind only series legends AJ Foyt, Al Unser Sr and Rick Mears on the all-time list.

Ironically, the Brazilian’s Indy 500 moments stand out all the more – even despite his ‘Spiderman’ fence climbing celebrations – because he has yet to win a single championship during a 20-year American single seater career. Quite incredible, given that his ‘rookie achievements’ stand alongside that of two-time Formula 1 champion Graham Hill and former CART champion Juan-Pablo Montoya.