Why should one put up with a Land Cruiser for traversing the dunes when a Rolls-Royce could do the same job?

To say global opinion is divided about the Rolls-Royce Cullinan would be a huge understatement. Named after the world’s largest ever jewel-quality uncut diamond, the hype surrounding its recent unveiling was unprecedented for the brand, but that’s understandable because this luxury leviathan is a car many thought would never be built. The very notion of a Rolls-Royce SUV was too absurd to even contemplate.

Thing is, not even Rolls-Royce can ignore the demands of the rich, and well-heeled motorists have been making a lot of noise recently about wanting to experience the ultimate in luxury wherever they wish to venture. Why should one put up with a Land Cruiser for traversing the dunes when a Rolls-Royce could do the same job? Once the carmaker had done the maths there was no going back and the resulting design of this “high sided vehicle” has met with cries ranging from “beautiful” and “stunning”, to “hideous” and “kill it with fire”. Proof, if any were needed, that even Rolls-Royce can’t please everyone.

Whatever your take on the Cullinan, one thing’s for certain and that is you’d better get used to looking at it, because along with the boulevards of Los Angeles this region is soon to become its natural habitat. It’s impossible to get a sense of the Cullinan’s physical mass just by looking at it in a photograph. In person it is, to put it mildly, gargantuan, with a bonnet line that’s higher than most people’s elbows and a roofline that’s not far from two metres off the ground. It’s more than five metres long and two metres wide and, when the suspension is in its highest setting, it takes on the physical attributes of an artic lorry. It’s unapologetic, it’s in your face and it’s unmistakable.

Painted black, some of that bulk is nicely disguised and the overall shape appears easier on the eye but, once you climb aboard, who cares what it looks like? For its interior is one of the finest available anywhere and, once those doors are closed there’s nothing whatsoever to cause concern. Beautifully appointed with the most exquisite materials imaginable, this is the ultimate definition of motoring luxury. 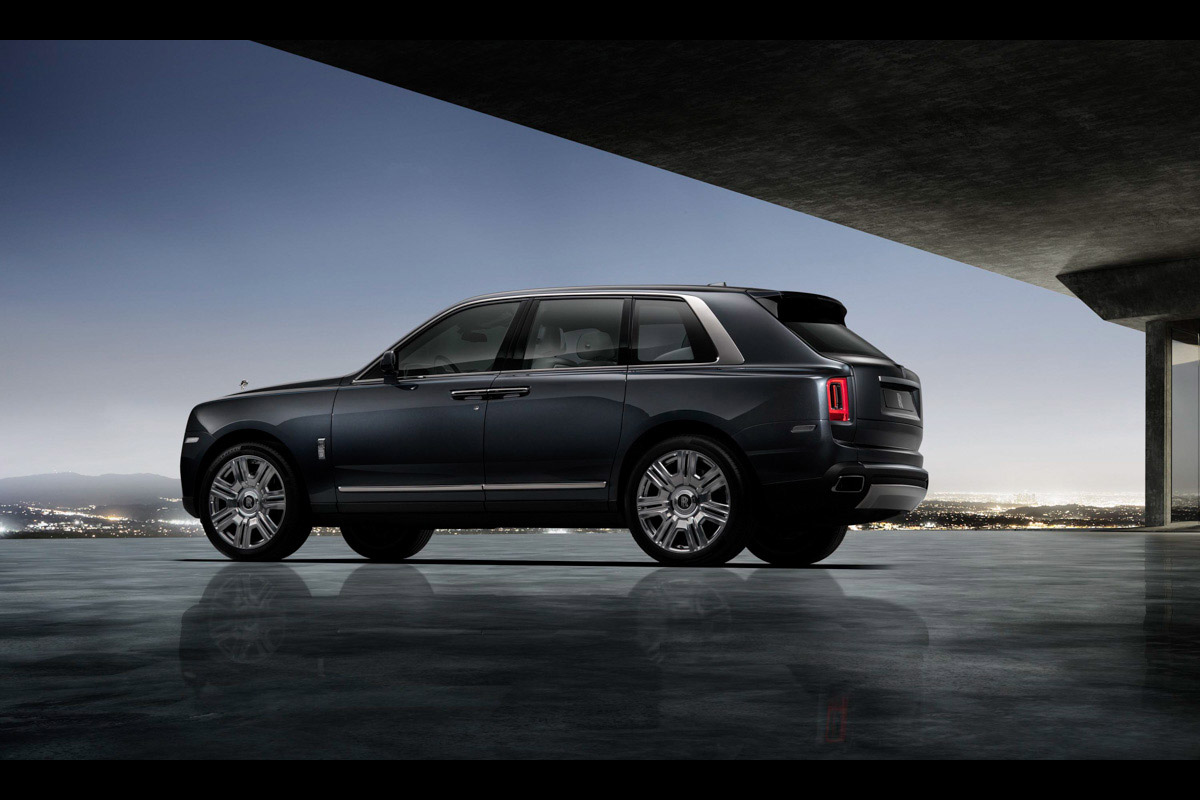 Its party piece is an optional extra that’s bound to be popular with customers, even if the only time they get to use it is when curious friends ask to see it in operation. Rolls-Royce calls it the ‘Viewing Suite’ and with it, at the touch of a button, two leather-upholstered chairs gracefully emerge from a cassette beneath the boot floor, joined by a small cocktail table that sits in the centre of the lowered tailgate.

Four-wheel drive and four-wheel steering are naturally present but, rather than a bewildering selection of terrain and surface driving modes, in the Cullinan you simply select what Rolls-Royce refers to as “Everywhere mode” via a button on the centre console that’s marked ‘Off Road’ and the computers take care of everything else. Video footage has been released by the company showing a camouflaged pre-production model hammering across UAE dunes without any difficulty whatsoever, although it’s unlikely to be seen bashing them with the FJs and Patrols at the weekend. There’s bound to be one, though, right?