I’ve always had a certain affection for Miatas in general. For some reason they’ve always called out to me. Possibly because of the way they hark back to the archetype of the classic 1950s and 1960s British sports cars but without the dodgy Lucas electrics. Or possibly because the Miata is the first car I wish I had, and almost had on a couple of occasions, but never did. Now I’ve got one sitting in my driveway – a very decent and functional (all things considered) red 1991 model.

It cost me all of 12 thousand dirhams to bring home and has already provided its fair share of motoring grins in as-is form. Sure it smells a bit funny. Sure you think it’s going to shake itself to bits every time you encounter a patch of remotely rough road. Yes it gets out-dragged by any taxi or minibus or SUV in the vicinity. It has more rattles and squeaks than a nursery and a zoo combined. It rolls and wobbles somewhat drunkenly through corners on its almost 20 year old shock absorbers. But even after 20 years and 140,000 miles on the clock it somehow still happily and effortlessly ladles out fun like a free soup kitchen.

It might seem to be quite a crazy purchase though when you consider what I sold before bringing this little red devil home – a rather spotless, highly modified, immaculately concocted white 2006 Mitsubishi Evolution 9 RS in the absolute prime if its life (currently owned by Aref Ramli as seen in crankandpiston.com’s coverage of the Sprint Challenge). The Evo is a car many petrolheads would chew one of their arms off for. So ditching a particularly fast Evo for an ancient Miata, subjectively speaking, would seem at first to be somewhat of a backwards step. A bit like going from jet power to steam power, from a guided missile to a small rock or from a .50 calibre, from a tank piercing sniper rifle to a barrel loaded musket made of tin with damp matches for gunpowder.

There is a certain logic behind the switch though. As one of my favourite motoring journalists of all time, Peter Egan, once said; racing makes heroin addiction seem like a vague longing for something salty. When it comes to speed addiction, you see, Evos are pretty much like a limitless supply of heroin being injected straight into your eyeballs. Incremental increases in performance are cheap and plentiful, meaning that the rabbit hole in terms of Going Faster is pretty much bottomless, not to mention wide, and therefore quite easy to fall helplessly into. With a Miata on the other hand, as long as you resist the temptation to explore forced induction kits (a substantial cost barrier), you’re inherently limited in the amount of speed you can be tempted to extract. It’s naturally aspirated 1.6 litre engine is much like methadone treatment in that sense.

This however is where the Miata shines. You see, in spite of its anemic power, skinny tires, flimsy chassis and general rattiness it still has all of the right ingredients needed to taste the holy elixir of motoring enjoyment. Miatas are inherently possessed of three important attributes which are fundamental to any real performance car after all: light weight, a perfect 50/50 weight distribution and mechanical simplicity. They’re light so they don’t have much of an appetite for eating through tires, burning through brakes, frying clutches and fraying drivetrains. They’re perfectly balanced which means that instead of being stuck with either terminal oversteer or terminal understeer on the limit you instead enter a nirvana of controllability, with the option to tip the fine balance either way on a whim. The very analog mechanical simplicity of the car also makes it not only quite reliable but quite easy (and cheap) to troubleshoot and fix as well.

Best off all though is the sheer accessibility of the Miata’s fun factor. In the Miata you don’t need to go fast to have fun. You can flirt with the car’s exquisite balance on pretty much any bit of remotely twisty road, at speeds that even soccer moms in SUVs would laugh off. It’s a Pitts Special acrobatic biplane to the Evo’s F22 Raptor – you’re able to enjoy the car roughly 60% of the time, while cursing other cars 20% of the time since, yes, everything from a minibus upwards can out accelerate you, with the remaining 20% of your brain cycles devoted to the next tiny improvement you might make to the car if you weren’t having so much fun in the first place.

For me personally then the numbers come out strongly in favour of the Miata. Not the performance numbers of course but the car’s grins-to-grimaces ratio. And nevermind that I drove the Miata home for not much more than the price of a major Evo service, with perhaps a couple of modifications tossed in (which there always seems to be).

Nonetheless, even with the Miata there’s a little room for improvement here and there. Having ruled out forced induction craziness for the car due to the cost and complexity, the goal is to polish the rough edges off the car mechanically and aesthetically. In an effort to keep things just on the proper side of irresponsible indulgence, the budget for the entire Miata Project has been set at 48 thousand dirhams and not a fil more – meaning that after all’s said and done I’m not to ever, under any circumstance, spend more than three times what I originally paid to drive the car home. Stuff like that actually makes sense if you’re a speed junkie, after all.

The Miata Project is underway then. I’ll be looking to make it handle as good as it can with a few simple bolt on modifications and we’ll be adding a little glitter just to set it apart from the crowd. 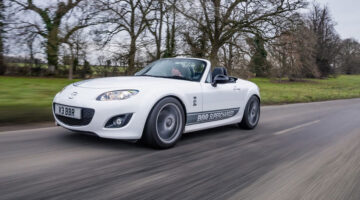