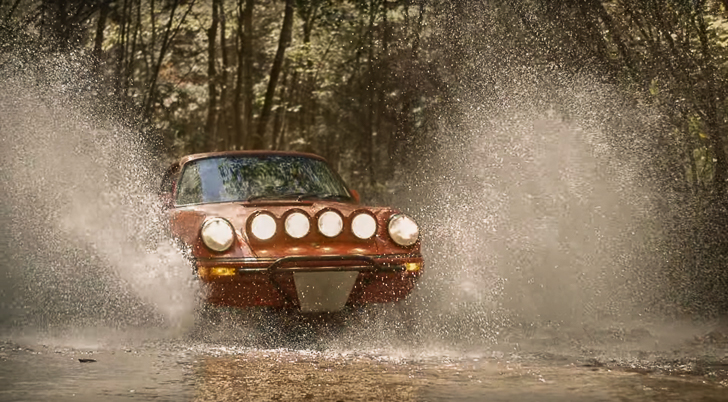 Upon reducing its 911 range to just two models in 1978 – Stuttgart shelving its 2.7-litre flat-six in favour of a 3-litre turbocharged alternative – Porsche simultaneously revived the ‘SC’ moniker, previously seen on the 356 SC during the early 1960s. Legend has it that SC stands for ‘Super Carrera’, though this is still a point of contention given that said 911 lacked power to the Carrera of its time. Without the ‘go-faster’ tag, the SC instead favoured greater torque at lower revs and some seriously cool aesthetic trinkets. Polished Fuchs alloys sit in each corner, while the ducktail over the impact bumpers offered a weight reduction over the Carrera.

So what happens when you give such a model to an American Le Mans Series and United SportsCar racer? Well, in Leh Keen’s case, he modifies the balls out of an ’81 model to replicate Porsche’s Rothmans rallying look of the 1970s to ‘go just about anywhere’ (hence its ‘Safari 911’ name). Longer shocks and front uprights have been added to greatly increase the ride height, mud flaps and a light pod have been installed, and a danske exhaust system added. Safari bash bars have been added to the bumpers while the entire model has been repainted in iconic Guards Red.

This is far from Leh’s first experience of Porsche power, however. Scroll down the page a little further and you’ll find o-board footage of the ’74 911 RSR the Irishman raced at the 2014 Le Mans Classic, with which he went on to win his class with WeatherTech Racing.