crankandpiston.com grabs a quick word with three-time 24 Hours of Le Mans winner – and Audi endurance racing legend – Rinaldo ‘Dindo’ Capello to discuss a formidable American Le Mans Series reputation, his enthusiasm for classic race circuits, and the one that got away in 2007.

Rewind 18 months. Rinaldo Capello is standing on the podium at the 24 Hours of Le Mans for the very last time, the cheers for the three-time Le Mans champion from the crowd below arguably more deafening than that for the victorious André Lotterer, Marcel Fässler and Benoît Tréluyer. In a career steeped with character building highs and lows, it’s a moment that will stay with Rinaldo Capello forever.

“To finish on the podium at my last Le Mans was very special,” he explains to crankandpiston.com. “For me it was the right decision to quit racing. I was getting older – now I’m close to 50 – and you need to be very fit physically to drive these cars at 101 per cent, especially at night. I was losing a bit of focus, and I preferred to stop when I was still at a very high level. I didn’t want to wait and not be winning when I quit. In fact I quit when Tom [Kristensen], Allan [McNish] and I were leading the World Endurance Championship standings, so that was positive.

“I don’t miss driving, I enjoy being here with my former teammates, my team, and I really enjoy still being part of the Audi program.” 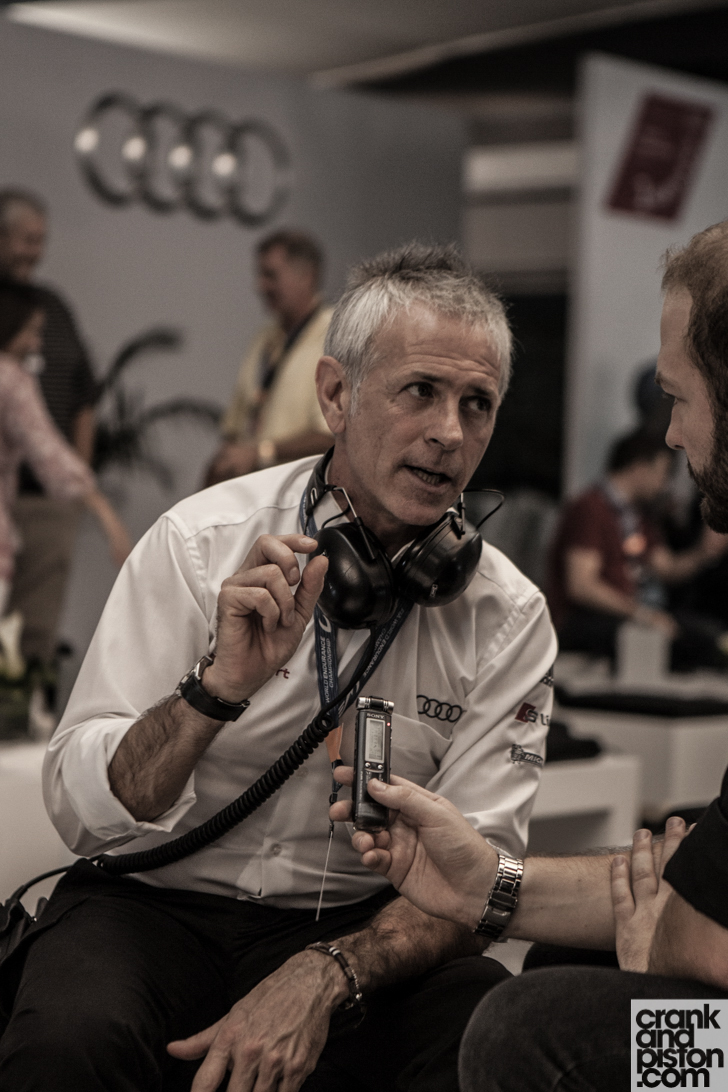 Rinaldo and I are sitting in the Audi VIP lounge at the Bahrain International Circuit. Behind us, the roar of a near-30 strong field is deafening – the ‘whoosh’ of the hybrid Toyota TS030 aside – as the FIA World Endurance Championship season finale plays out under the darkening sky. And Rinaldo, known affectionately as ‘Dindo’, has an enormous grin on his face. Though Audi has no answer for the speed of either Toyota in the 2013 6 Hours of Bahrain, Dindo’s former teammates Allan McNish, Tom Kristensen and newboy Loic Duval have already secured the 2013 FIA WEC crown one round early for Ingolstadt. He may have hung up his helmet in 2012 after 19 years of service to the four rings, but Dindo remains as supportive as ever to ‘his’ team, and the driver who ultimately replaced him.

“Loic’s really been doing a great job,” Dindo continues. “He was already with us the year in 2012, so he understands the team spirit and immediately fit in with Allan and Tom. And that’s important. Audi changed my life as a driver, which is why I’ve invested almost all the money I earned with Audi in dealerships: now I own four Audi dealerships in Italy. I raced with Audi for 20 years and hope to stay with Audi for the next 40! I’m very proud to be an Audi ambassador and to be part of the marque’s legacy. 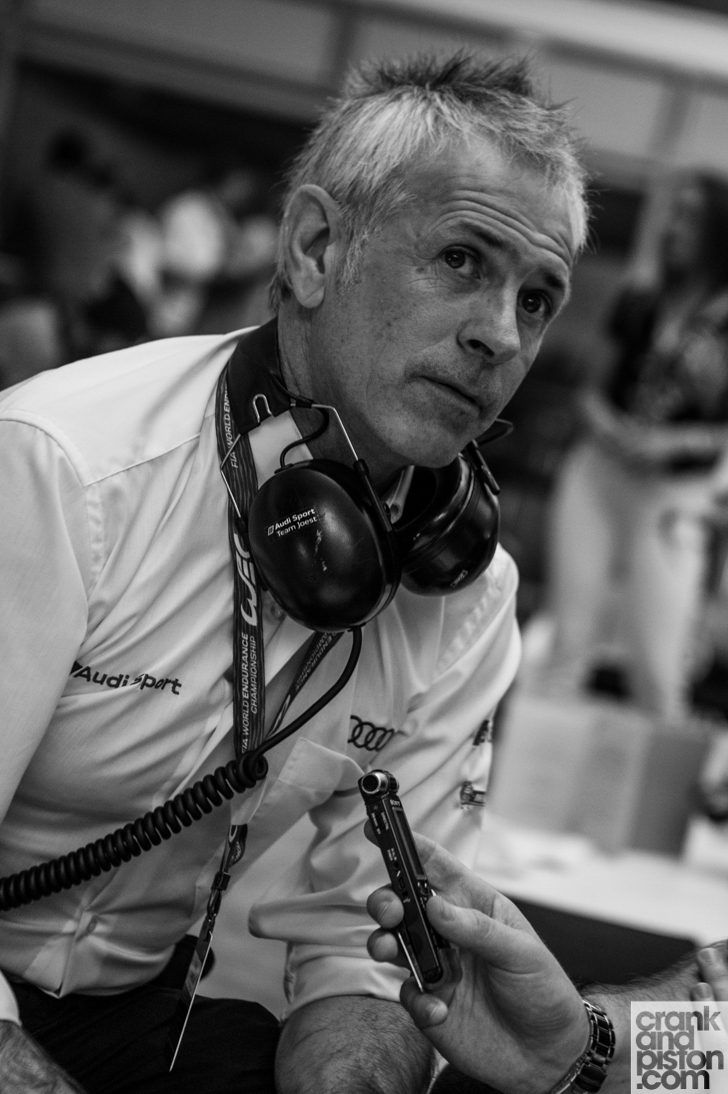 The Italian’s own personal legacy began with go-karts in 1976 before he landed a Formula Fiat Abarth seat in 1983. In 1985, Dindo stepped up to Italian Formula 3, a series that over the years has boasted former Formula 1 Grand Prix winners Ricardo Patrese, Elio de Angelis, and Giancarlo Fisichella among others. After four seasons plus a year on the sidelines testing in Japanese Formula 3000, and Italian Touring cars came calling, Dindo making an immediate impression with three titles in four years (1990, 1992 and 1993). Vindication of his speed, plus a phone call from Audi in ‘93, marked the end of his single-seater aspirations and the beginning of a brand new era.

“I was just lucky,” a modest Dindo explains. “In September, Audi needed a driver for a sportscar test because one of the factory drivers was sick, and since I was driving for the Volkswagen Group in Italy, I was invited to Monza for this test. And the test went so well that a few months later I signed a contract as a factory driver. Like most things in life, you have to be in the right place at the right time.”

Since making the jump from single seaters to tin tops (and latterly sportscars), Dindo has built an enviable record of success. As well as his victories at La Sarthe in 2003, 2004 and 2008, the Italian has taken five wins at the prestigious 12 Hours of Sebring, an impressive 23 overall victories in the now renamed American Le Mans Series, became ALMS champion in both 2006 and 2007, and holds the record for the most victories at Petit Le Mans with five in 2000, 2002, and from 2006-2008. It’s a blazing trail, and while outright records may not have been what Dindo set out to accomplish, there are two that remain dear to his heart.

“I never raced for records, but there are two which I am very proud of: I am the driver with the most amount of victories in prototypes, with Audi; and I have a speed record in qualifying in Mosport, which is the highest average speed in qualifying for a prototype in America [a 1m 04.094s laptime in an average of 138.116mph/222kph]. That is something unique, especially at a track like Mosport, which is so dangerous.

“I enjoyed very much my time in America and had a lot of great results. I suppose one regret is the ALMS championship I lost back in 2002. I shared a race [Sears Point] with Emanuele [Pirro] for one race. Due to a puncture, Emanuele had a very big crash in practice which cost us time, and we finished eighth. Amazingly, no other LMP1 car stopped. Normally, at that time, in every race three or four LMP1 cars stopped due to mechanical problems or accidents. But no-one stopped. We finished eighth, we scored only a few points, and I lost the championship by only two points [ironically to Tom Kristensen].” 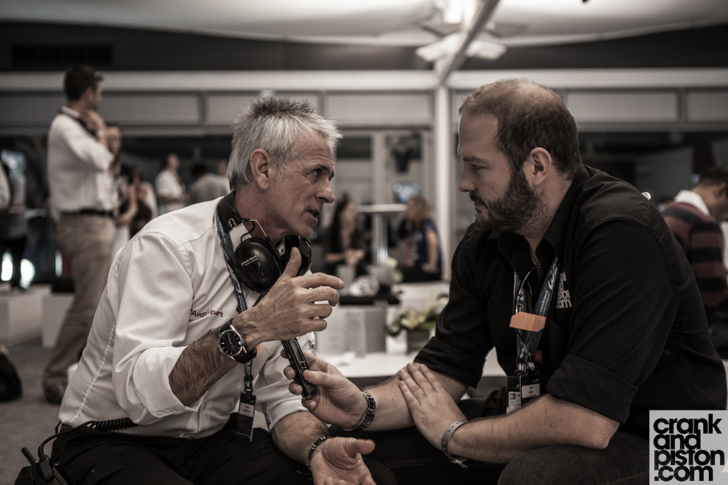 For his one regret though comes a particular saving grace, one that – interestingly – former teammate Allan McNish also cites as one of his career highlights. Owing to a devastatingly fast challenge from the Team Peugeot 908 HDi in 2008, Audi’s chances of extending its run of victories at Le Mans to eight from nine starts looked bleak, with Alexander Wurz, Pedro Lamy and Stéphane Sarrazin in the French squad securing pole position and disappearing into the distance. Victory seemed assured, but lengthy pitstops and a disadvantage to Audi in the rain ultimately stunted Peugeot’s charge.

“We didn’t have the best car, but team spirit, strategy, and cooperation between driver, engineer and mechanics made a big difference. At the end of the day, we achieved a result that was not scheduled. To win with a car that was not the fastest is much sweeter. For sure the 2008 Le Mans win is the favourite, and it helped with the disappointment in 2007. Tom, Allan and I were leading from the first corner onwards. Just a few hours from the end we had almost four laps over second place and we lost a wheel. That’s probably one of the few regrets I have about my career.”

The surprise 2008 victory would mark the last time Dindo Capello topped the Le Mans podium, though that’s certainly not knocking a remarkable record. From 13 starts between 1999 and 2012 (excluding a one-off year in the DTM in 2005), the Italian failed to go the 24-hour distance only thrice, and every time he did – barring one fourth-place slip in 1999 – he finished in the top three. After a debut outing at the event in 1998 with the GTC Competition McLaren F1 GTR, Dindo would have to wait five years before finally climbing the top step. Ironically whilst flying the Bentley colours.

“Actually for us it was like being at home, since the Bentley was run by the same team. We had the same feeling like racing with Audi. It was a car with Audi DNA, and just the colour was different! But for sure the win with Bentley was nice, very sweet for Tom and I. 2003 was the anniversary of the last victory of the Bentley boys, it was the launch of the new Bentley Continental GT. We were Audi drivers but were loaned to Bentley for two races, so we developed the car and in the end we won the big one.” 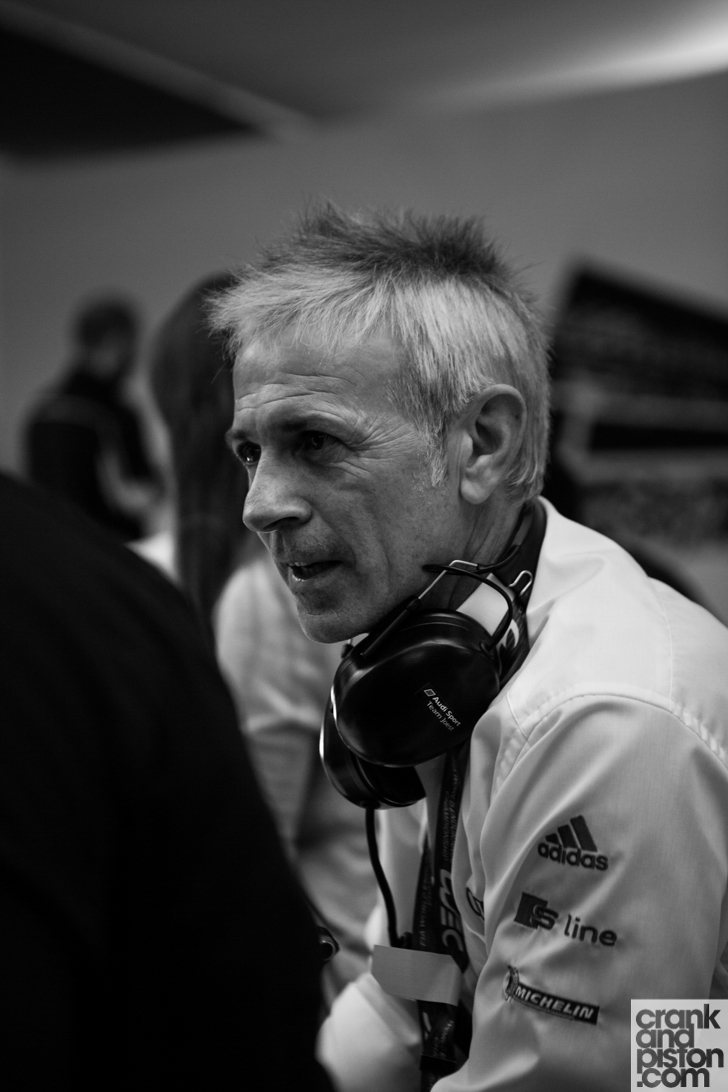 His 2003 teammate Guy Smith returns in British Racing Green overalls at this year’s Gulf 12 Hours, the first official start by Bentley in a motor race since its 2003 La Sarthe victory. His other, Tom Kristensen, wasted no time obliterating a 24-year record once held by Jacky Ickx, the Dane this year extending the Belgian’s six-win record at Le Mans to nine. Another big grin shows there’s no signs of jealousy from Dindo, with whom Kristensen shared three of his nine event wins.

“You can’t make mistakes and Tom doesn’t make mistakes at Le Mans. You need a good car, which Audi have always supplied. And then you need good teammates, which he has always had. But many, many times, most of his nine victories, Tom himself was the key to his wins, and he deserves all of them. I think for sure Tom has a special feeling at Le Mans: nine victories don’t come by chance. For Tom it is Le Mans. For me, no doubt, it was Laguna Seca. Or perhaps Imola and Mosport in Canada. You just get in the car and you get this feeling that you are unbeatable. It’s on the old style circuits where the driver can make a difference. You don’t get that a lot with modern tracks.”

Behind us the 6 Hours of Bahrain is entering its final stages, and Dindo is very keen – albeit not impolitely – to listen in on the Audi team headphones. The #2 R8 Ultra – his old car – has already retired from the event, but the #1 of outgoing FIA WEC champions Lotterer, Fässler and Tréluyer is looking good for second place overall. It may not be the sign off Audi was hoping for in 2013 but it’s been a dominant year for Ingolstadt, one Dindo is sure his team can improve on in 2014.

“Audi would like to increase its number of victories at Le Mans, and for sure next year against Porsche we will try even harder. When you win so many times, everything looks easy from outside. But everything is difficult. It’s more difficult than the race before, and that will also be the case next year. But I’m confident we will win again in 2014.”

‘We’ will win again. 19 years of loyal service with Audi isn’t likely to end any time soon for Rinaldo ‘Dindo’ Capello.