Red Bull Racing’s Carlos Sainz takes a spin in the new Yas Mall in Abu Dhabi. In a Formula 1 car. 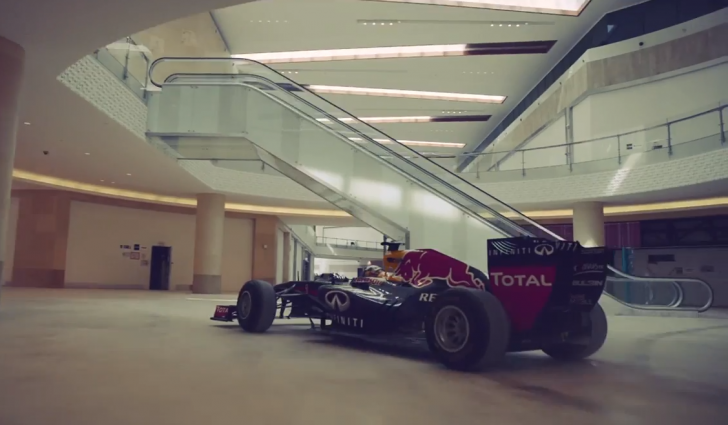 An Infiniti-engined Red Bull Racing Formula 1 car unleashed in Abu Dhabi is nothing new: since the first race at the Yas Marina Circuit in 2009, Red Bull has won three of the five races staged there.

Ahead of the season-closing (ahem) double-points scoring Abu Dhabi Grand Prix, Red Bull were recently asked to commemorate the opening of the new Yas Mall. By driving through it in, what appears to be, one of the RB7’s used during the 2011 F1 season.

The lucky swine chosen to undertake this 21st century tribute to The Blues Brothers is Red Bull athlete Carlos Sainz Jr, son of two-time World Rally Champion – and signed Peugeot Dakar Rally driver – Carlos Sainz Sr and a racer in his own right, the young Spaniard currently heading the 2014 Formula Renault 3.5 Series standings with just one round left to run. Rumours abound that, with the game of musical chairs currently being played at both Toro Rosso and Caterham, that Sainz could make his F1 debut before the end of the season.

He may have been looking for a slightly different kind of seat-time, but beggars can’t be choosers…