There are giant pickups, and then there’s Ram’s 692bhp Hellcat-engined 1500 TRX. 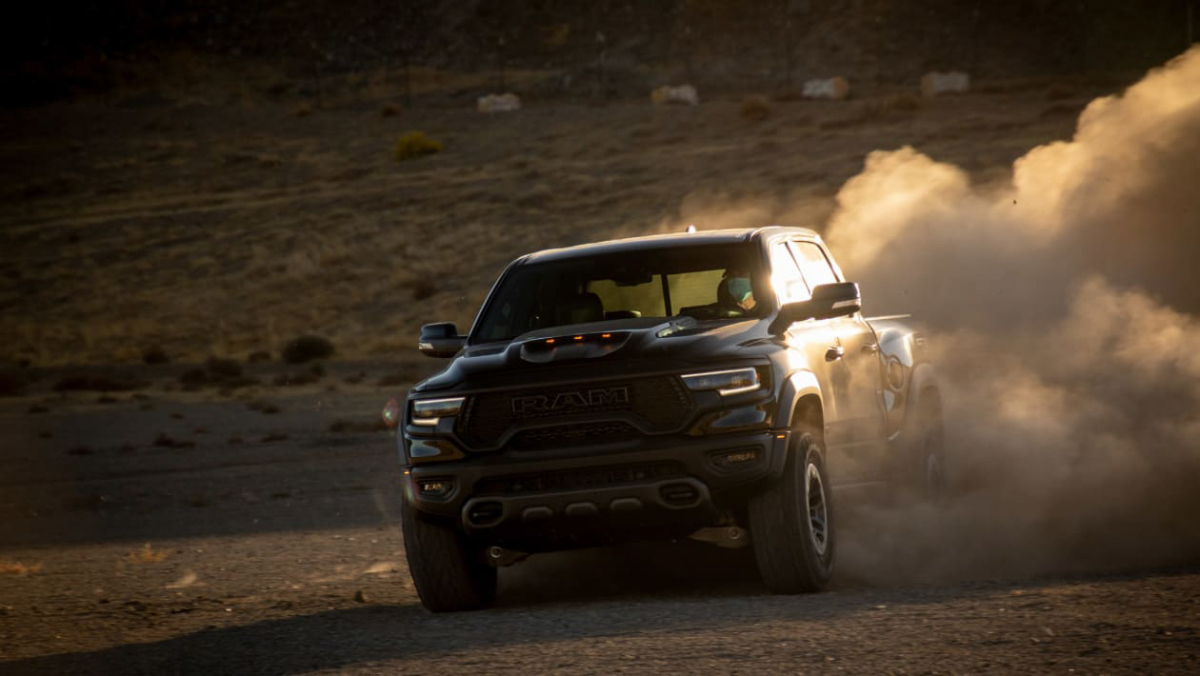 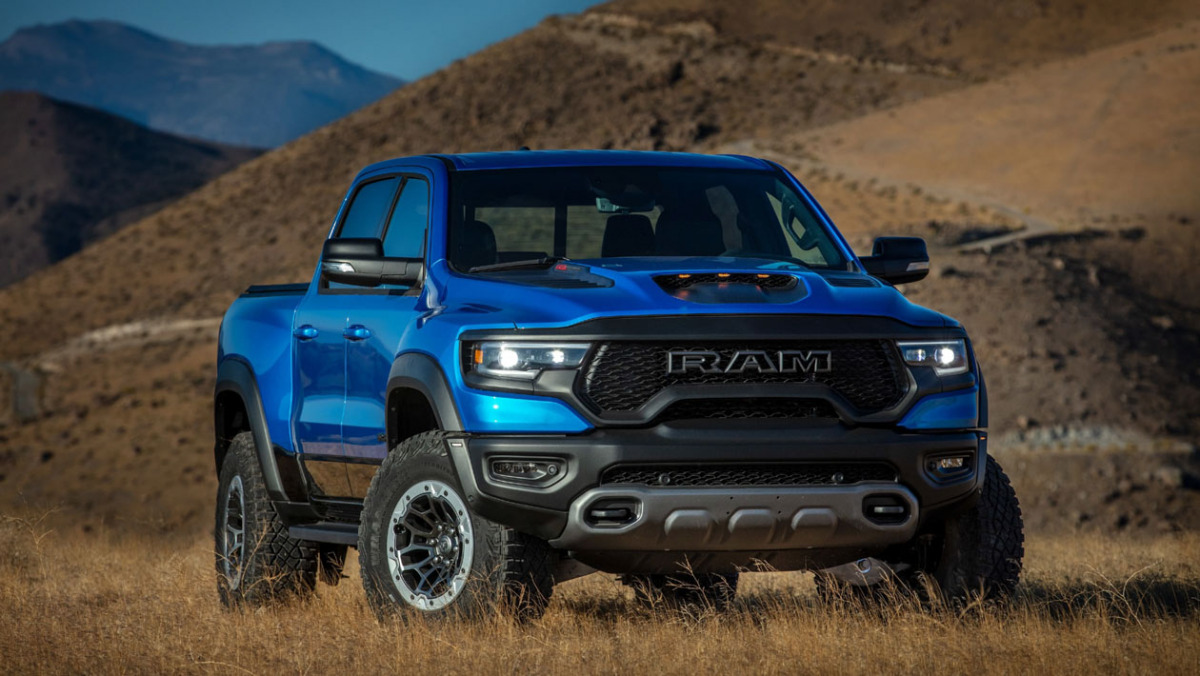 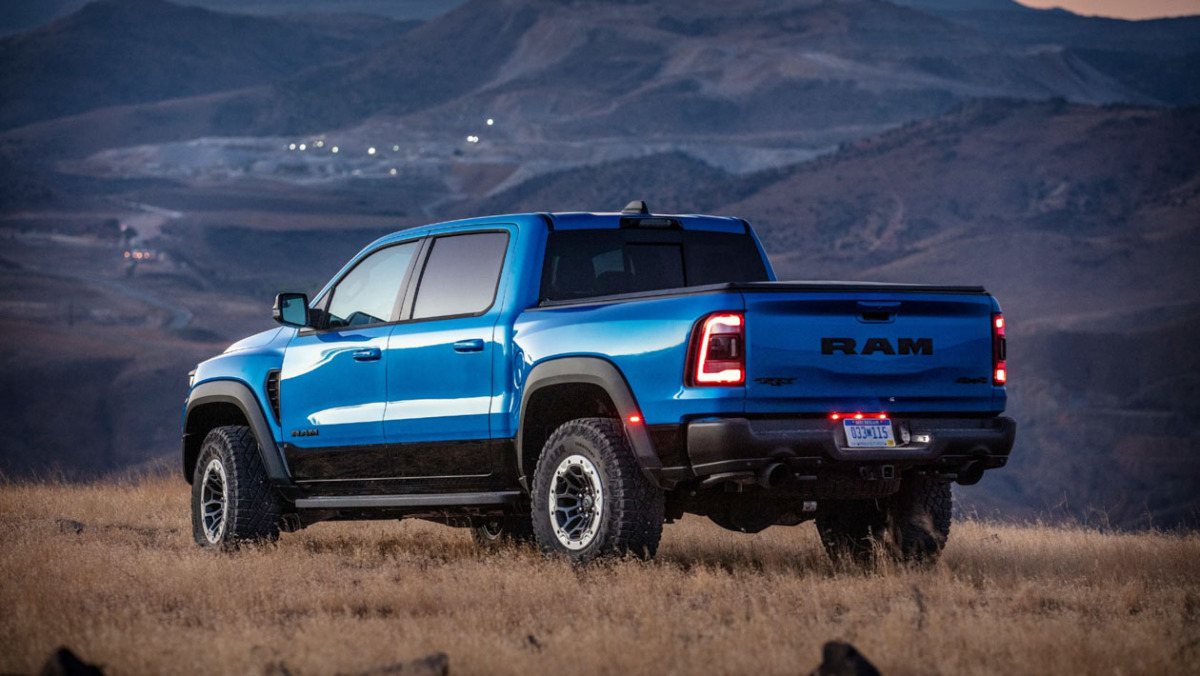 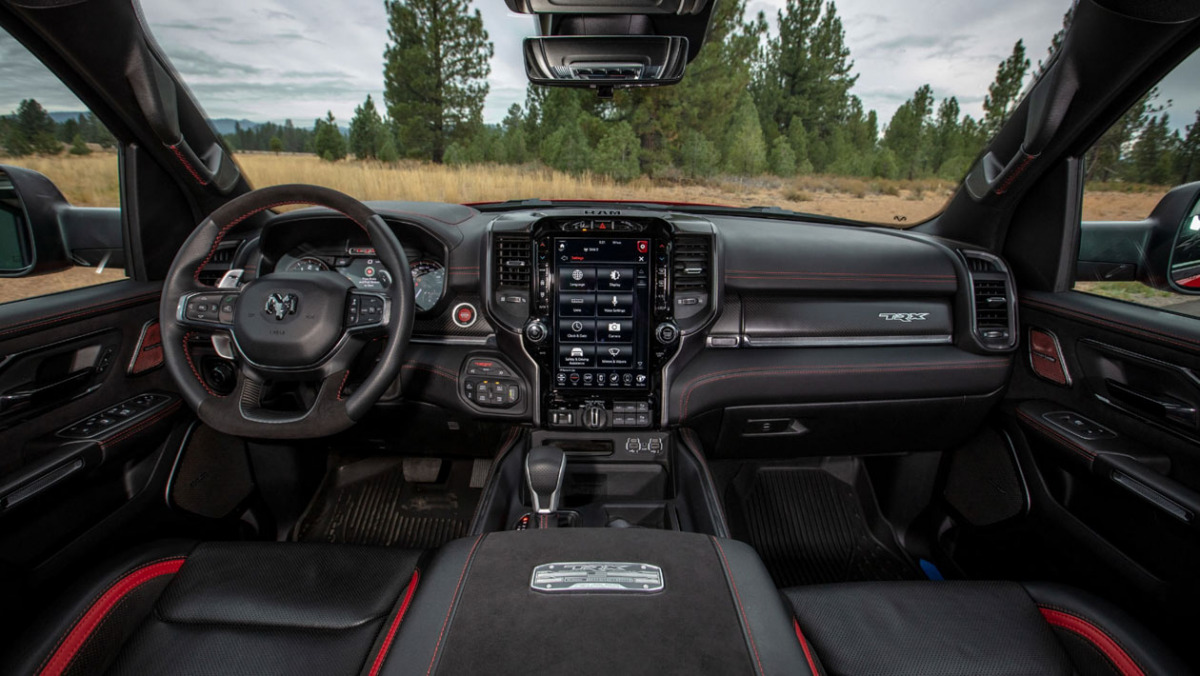 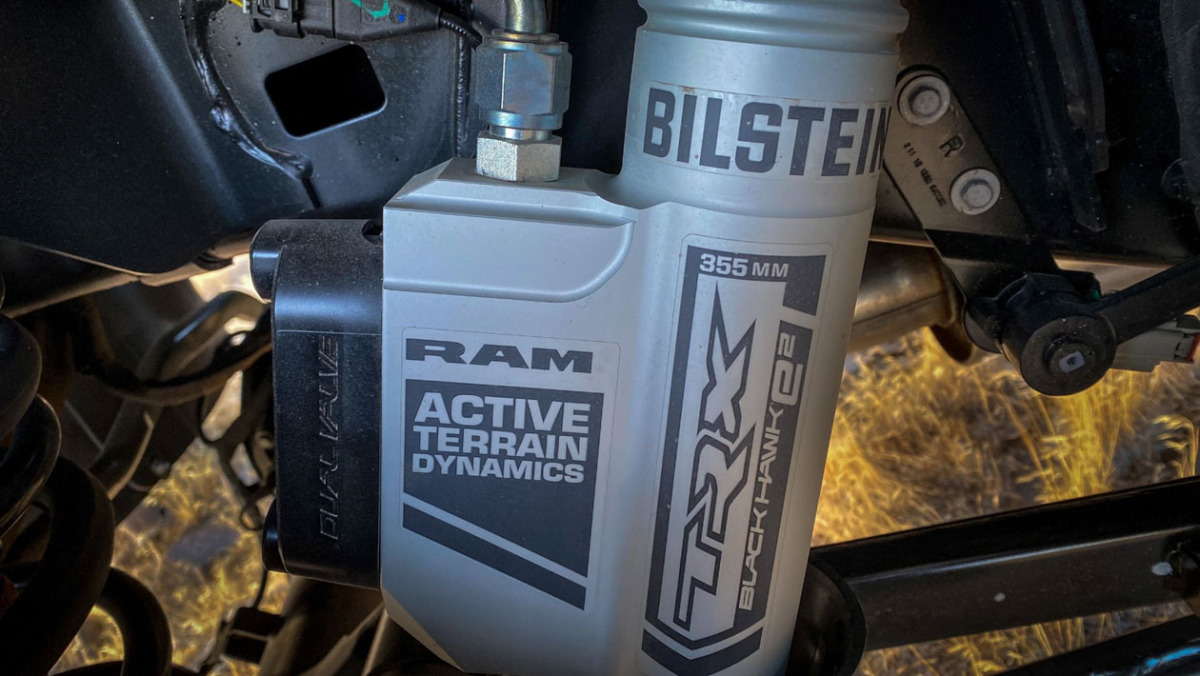 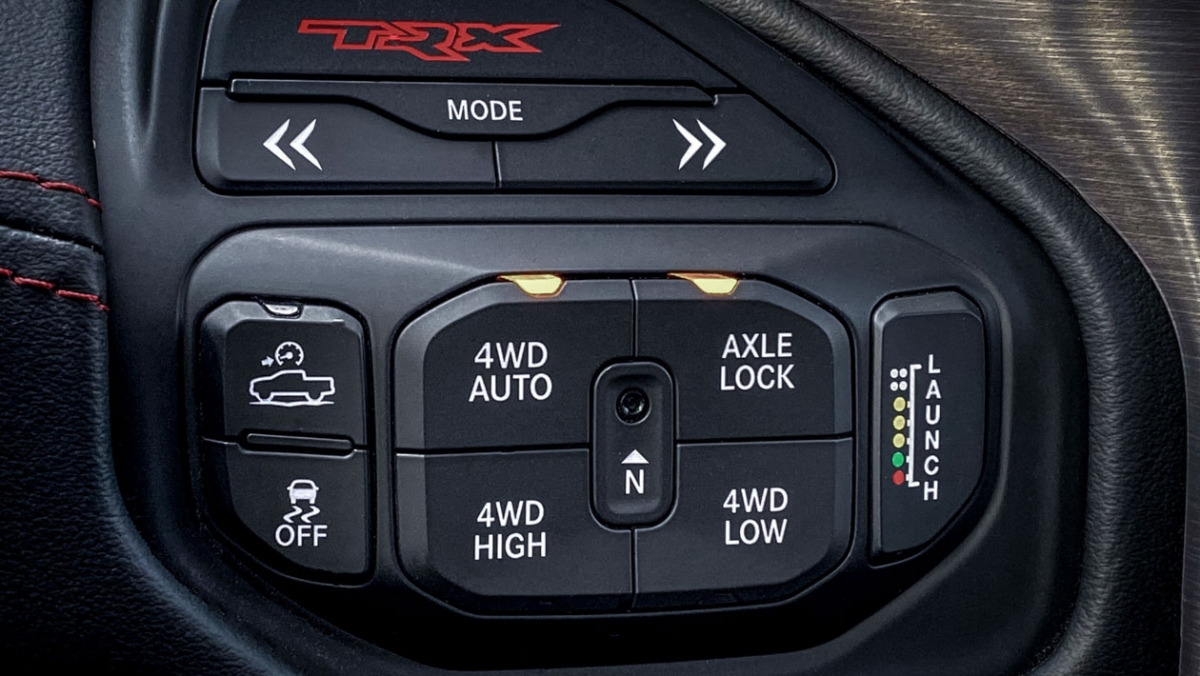 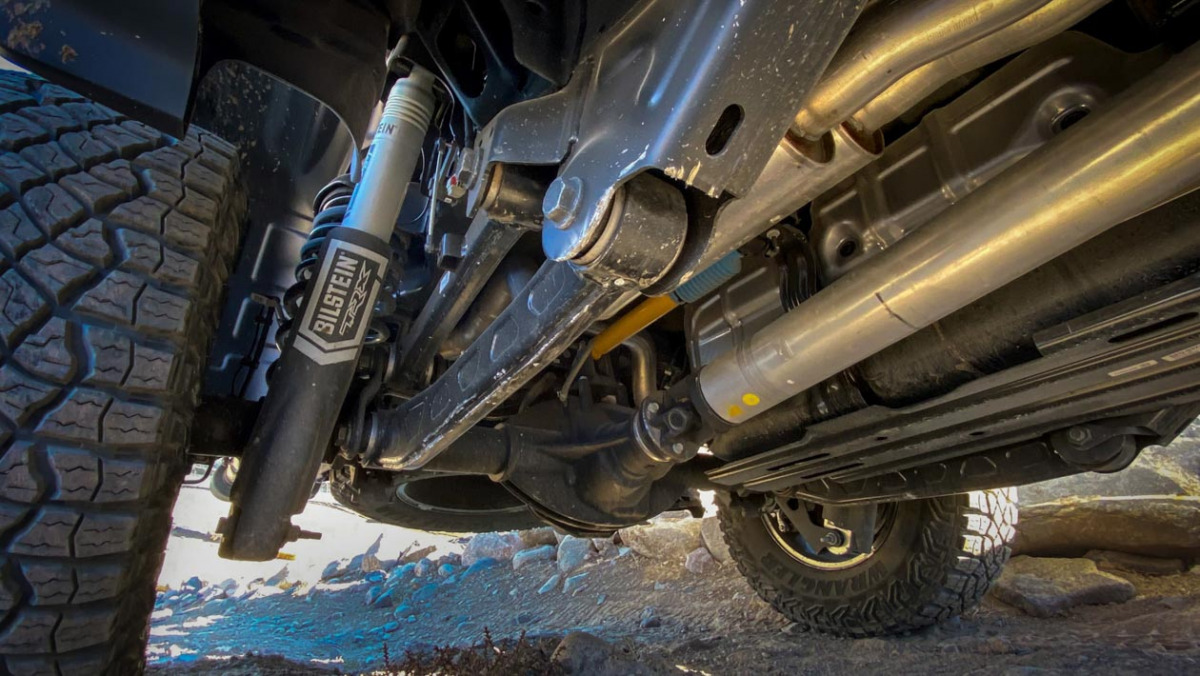 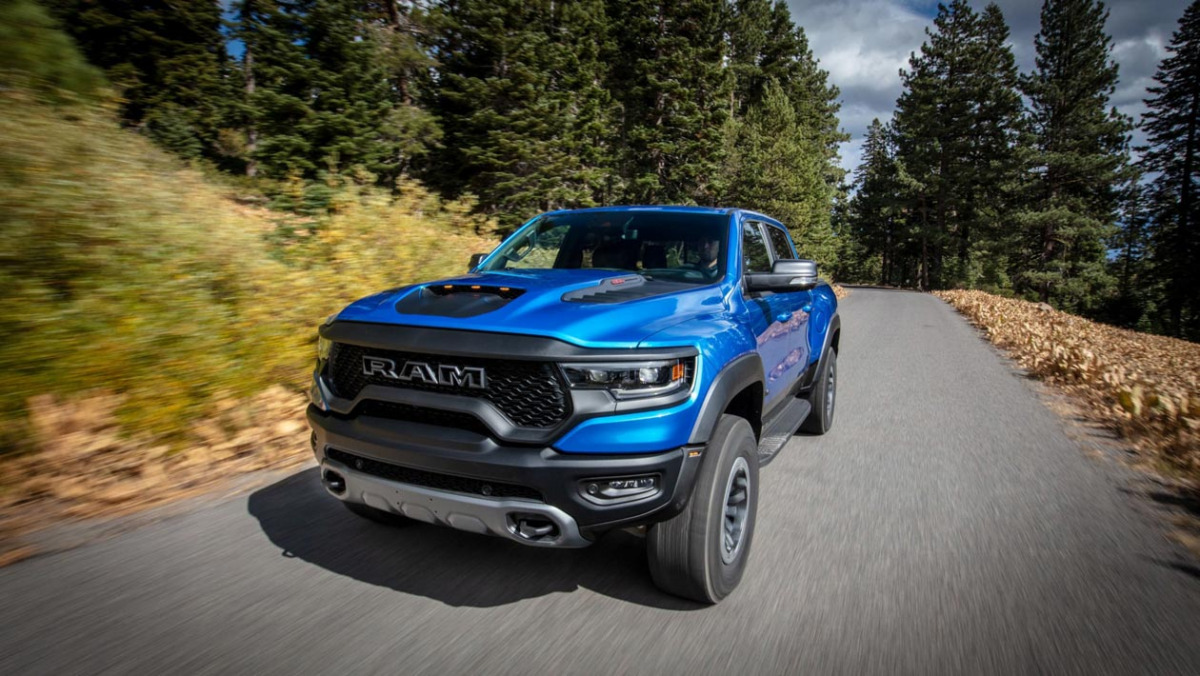 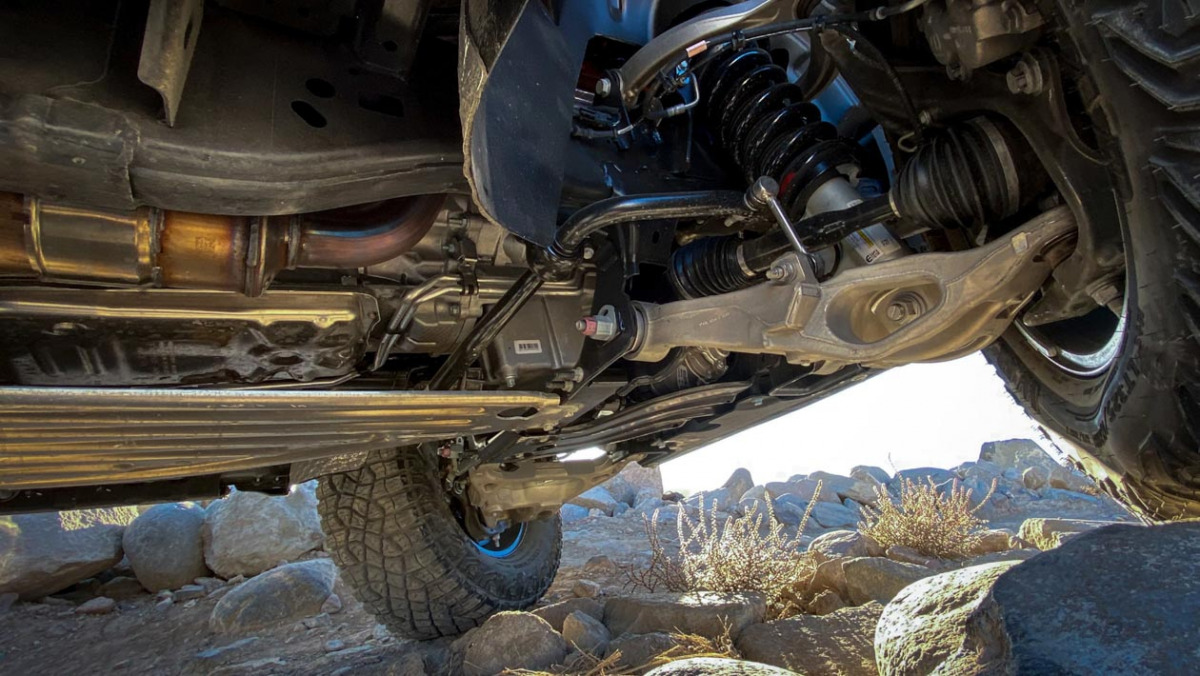 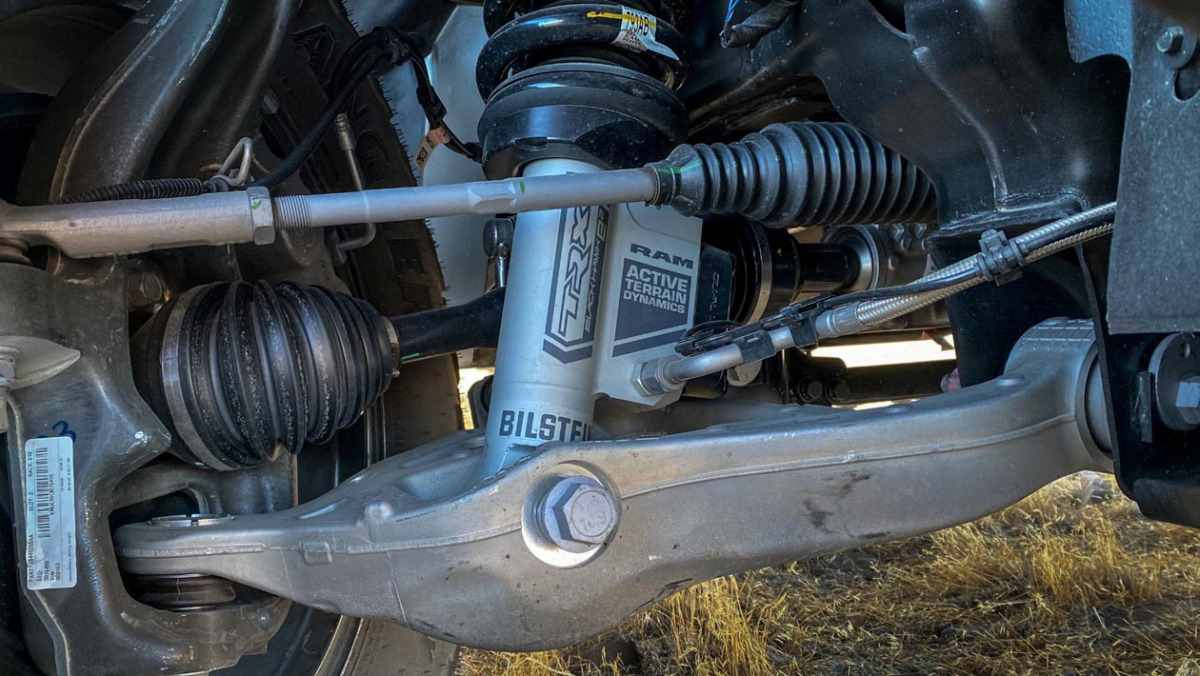 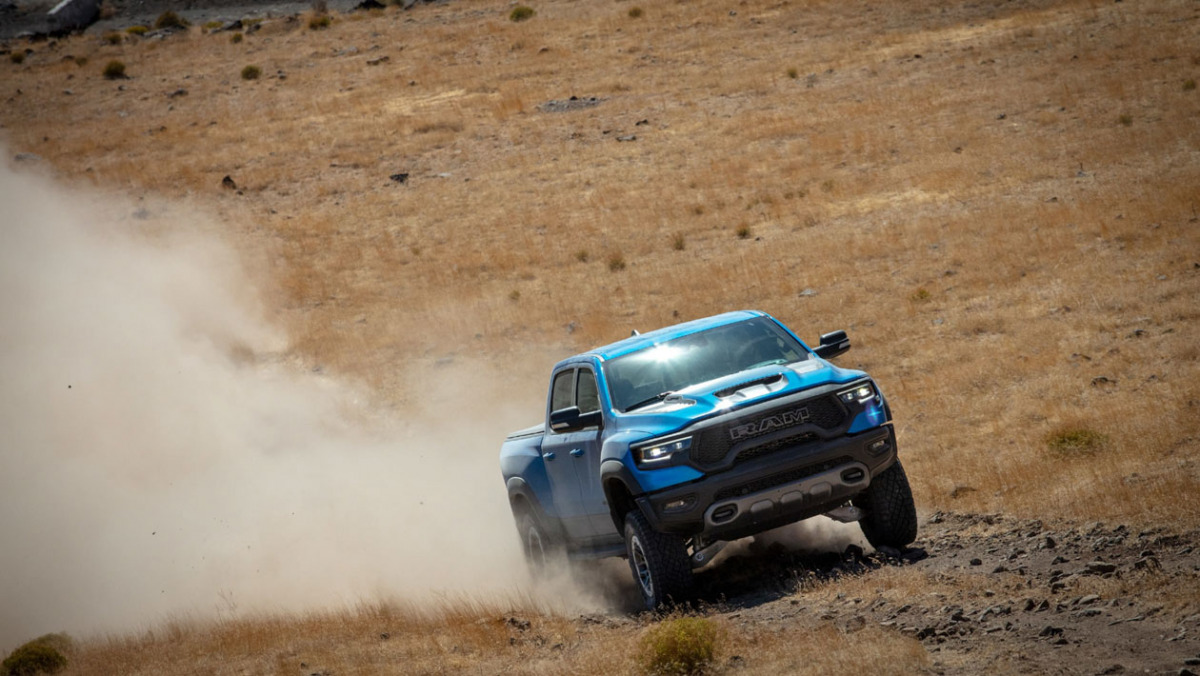 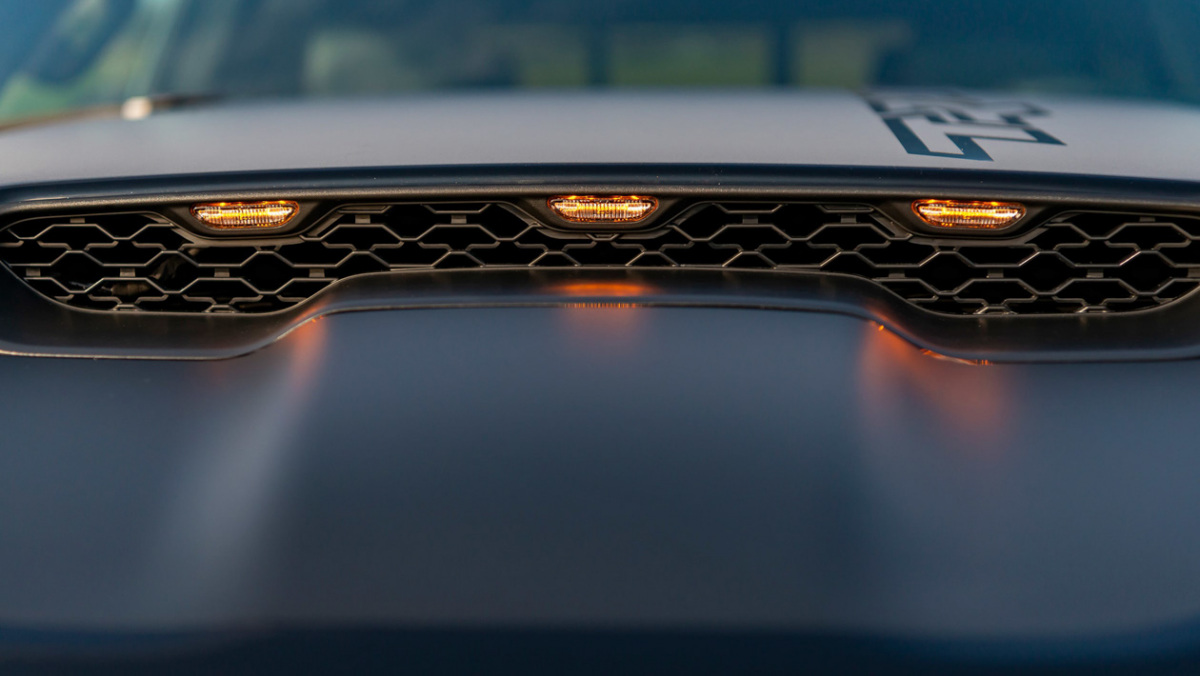 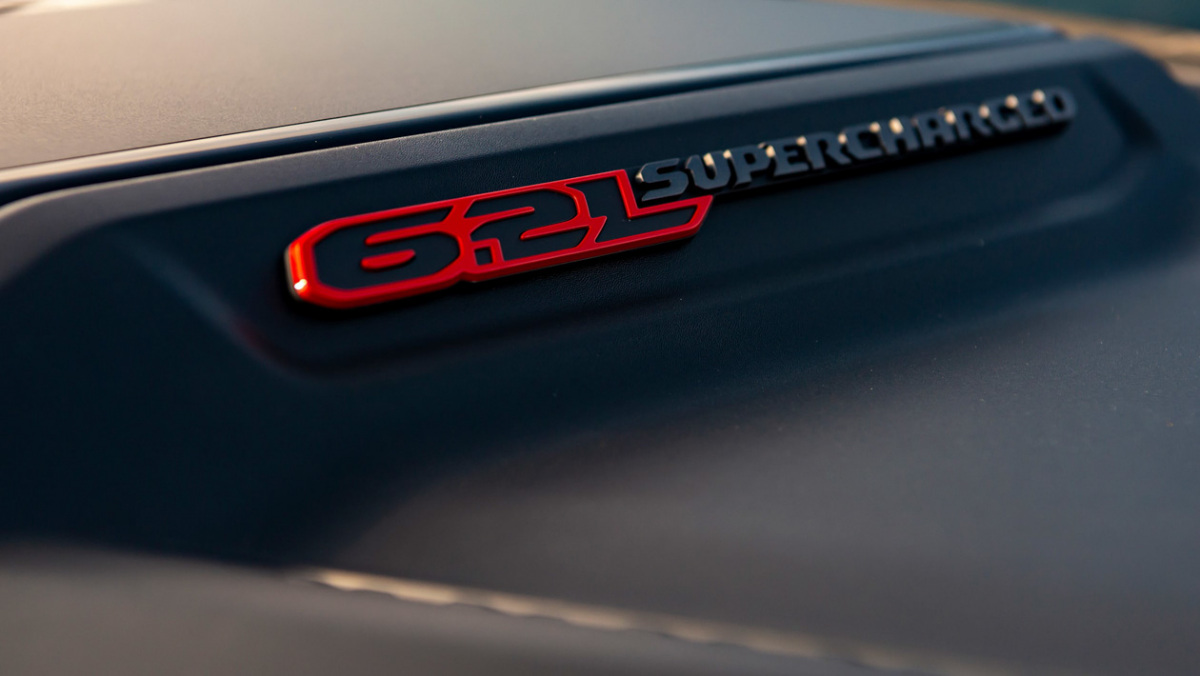 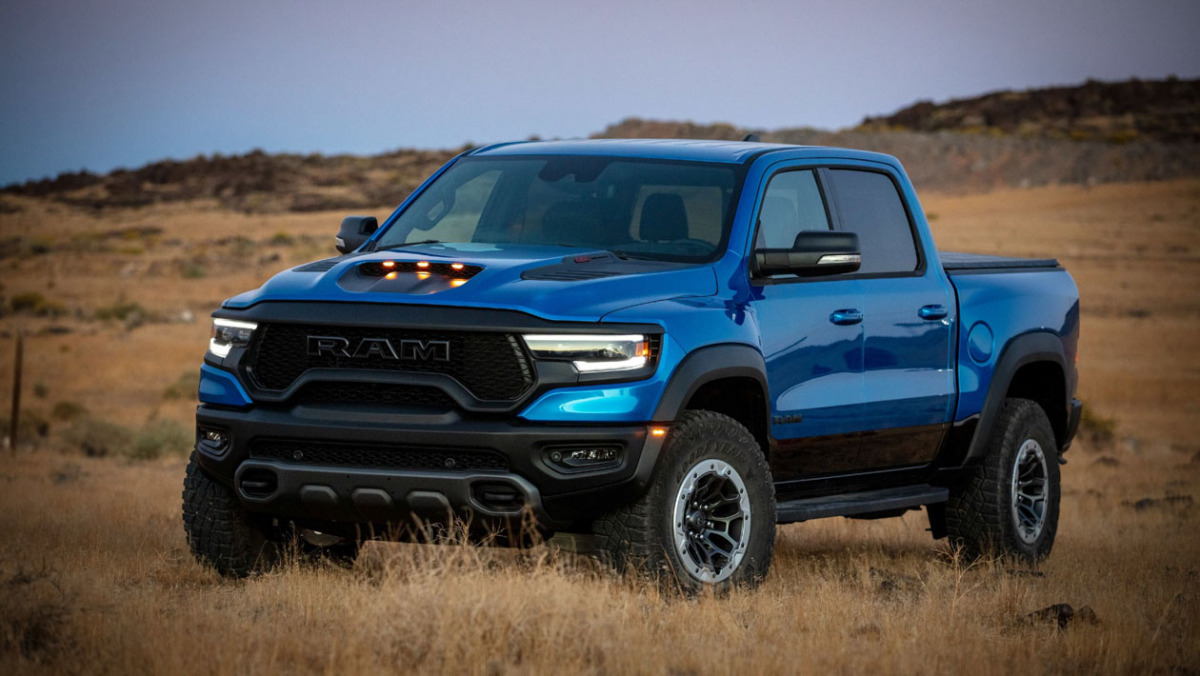 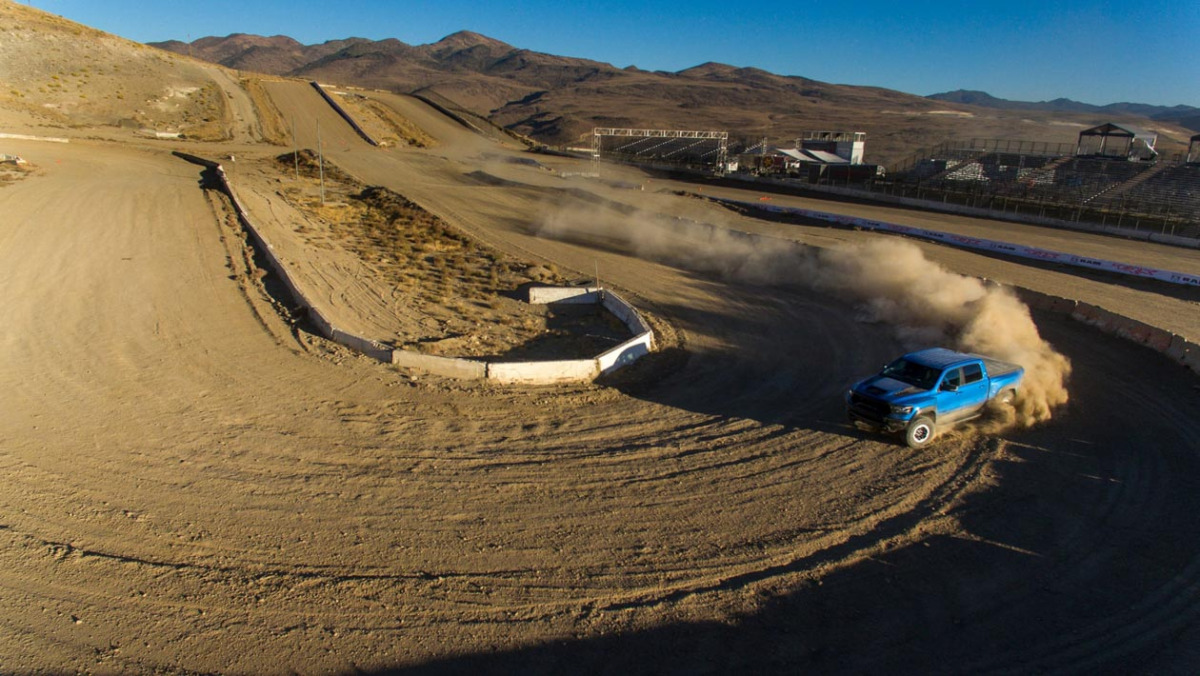 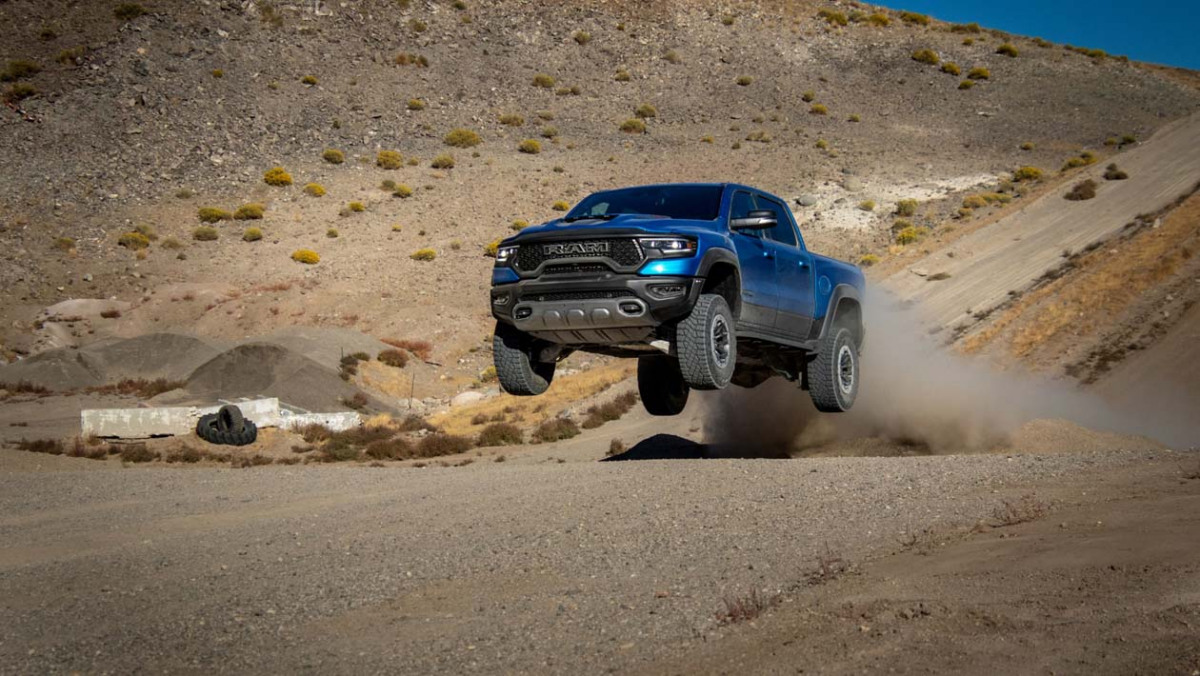 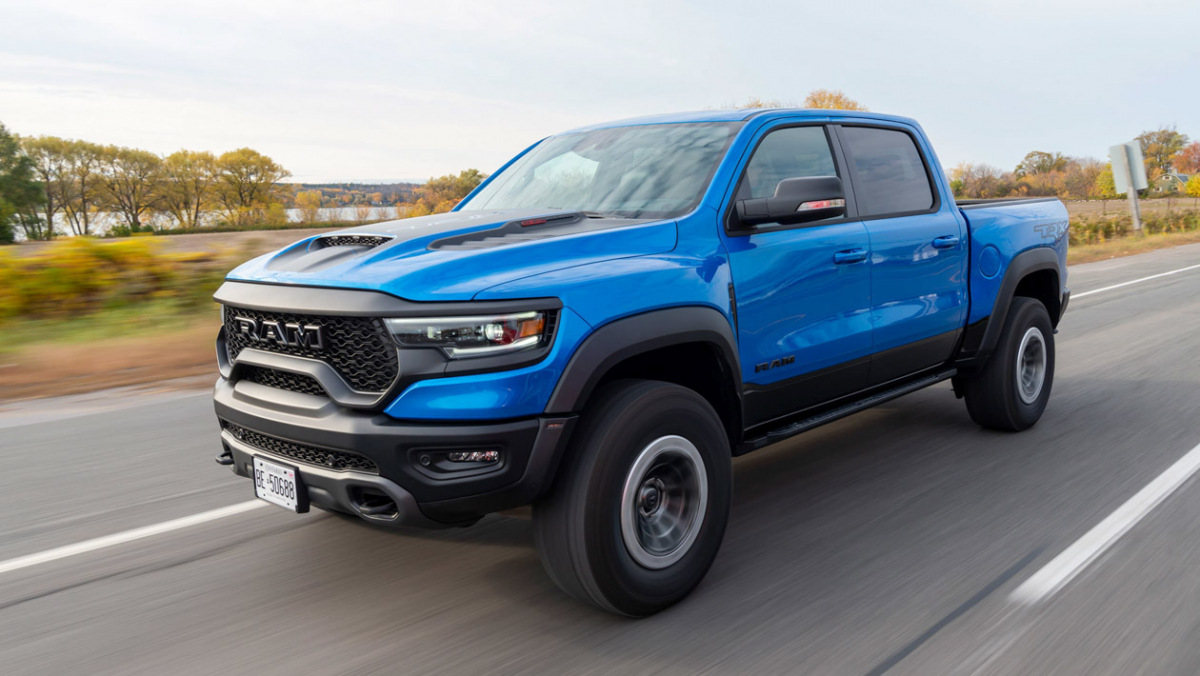 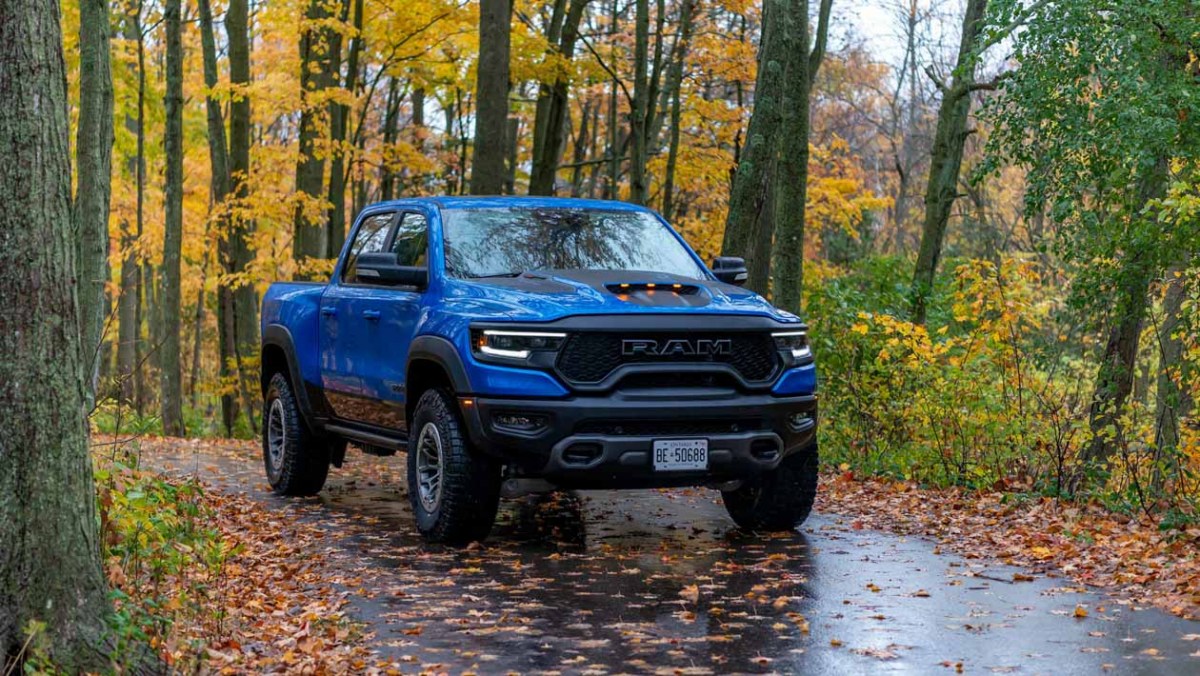 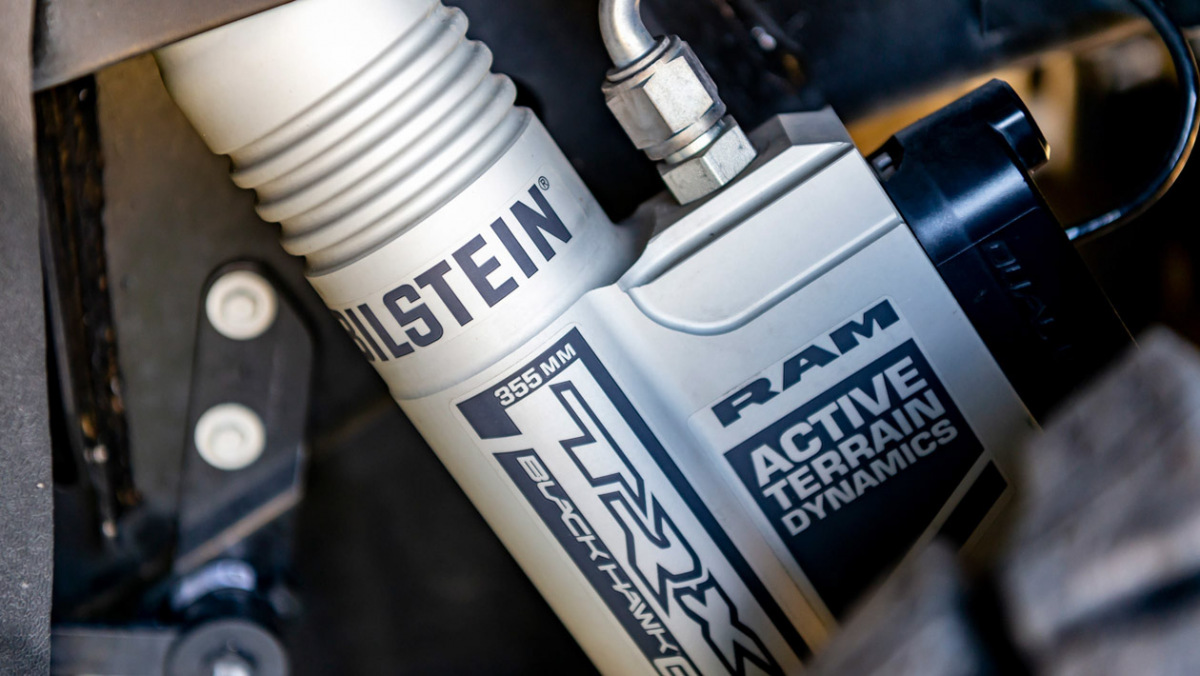 There’s nothing more exciting than waking up early to drive to a trackday. Even better if it’s a ‘proper’ track. Think Spa, Silverstone or the Ring. You’ve checked levels and tyres and planned your breakfast stop en route to the circuit. The pain of paying out several hundred pounds recedes as your adrenaline levels start to gently percolate; the fear of mechanical issues is neatly packaged away in a box deep within the recesses of your brain, and very soon you’ll get to feel the freedom of driving as fast as you dare, surrounded by like-minded friends and strangers who nevertheless feel like brothers and sisters in arms.

To understand the Ram 1500 TRX requires you to capture that feeling and transplant it into a different environment. One very alien to those of us in Europe. It’s Sunday morning. Early. The sun is already taking the chill from the air and another gorgeous day begins in California. You are wisely avoiding one of the endless Cars & Coffee events and instead head out of the city. The freeways are quiet and, as you point inland, you’re pretty soon sharing the road exclusively with Jeeps with lifted suspension and pickups pulling trailers with motocross bikes or ATV buggies. They’re heading to one of dozens of OHVR (Off Highway Vehicle Recreation) parks for a kind of off-road trackday.

And so are you. In a pickup truck with a 692bhp 6.2-litre supercharged V8 and tree trunk-sized Bilstein Black Hawk e2 adaptive performance dampers that soak up so much punishment they should be called Black Magic. In the next few hours you’ll be sliding across dry lake beds in Baja mode, leaping this 2880kg monster over yumps that will send it six feet in the air, and generally doing whatever the hell takes your fancy.

Rock-crawling? No problem. Living out all your Rally Raid fantasies over desert floors and dunes? Absolutely. Nothing is off limits.

These places are vast (Hungry Valley, for example, is 19,000 acres, and if that feels too restrictive you could always head a little further afield to Johnson Valley and its near-200,000 acres of varied terrain) and – get this – free to use. Just roll up, meet your friends, check out a map to see what area you’ll explore – and drive.

No marshals. No noise issues. No angry walkers or cyclists. Just the wilderness and a booming V8 soundtrack. Sounds fun, doesn’t it?

Of course, you’ll have fuelled up before you leave the sealed surfaces behind. Probably twice. The TRX has a 125-litre tank but it’s rated at 23.5L/100km (28.2L/100km for city driving) so you burn through it faster than a fuse on a stick of dynamite. But when petrol is on average 56p per litre that doesn’t seem so painful. And in return you get noise from the bowels of Hades, a 0-100kph time of 4.5sec, 0-160kph in 10.5sec and enough torque to tow a house, smash over anything in your path or, as mentioned before, launch the TRX into the air like a full-on Trophy truck.

The TRX, which is available only as a four-door crew cab, costs from $69,995 in its home market but most will come out at more like $85,000 after options. That’s a very expensive pickup, but the spec is little short of extraordinary. It is very much not the sort of vehicle of which we generally approve, but when you delve into the details you can’t help but be a little bit in awe of Ram’s Hellcat-engined monster.

Yes, the TRX is essentially a near-three-ton permanent four-wheel-drive pickup that’s wilfully inefficient. But it also features those trick dampers designed to ‘tackle off-road terrain at over 160kph’. It has 13 inches of wheel travel at all four corners, a new front suspension system with aluminium double wishbones, an e-diff at the rear and a four-wheel-drive system offering Auto, Snow, Tow, Baja, Mud, and Sand & Rock modes. Baja sends 75 per cent of torque to the rear tyres. It has a reinforced frame, five skid-plates, a unique dual-path intake system with incredibly effective filtration of sand, dust and water, and a Jump Detection mode to protect against sudden spikes in power. Maybe it’s not quite as focused as, say, a GT3 RS for its intended purpose, but it definitely has the engineered might of a Nissan GT-R in its own chosen arena of warfare.

The TRX is huge. Even Americans think it’s huge. At 5916mm it’s nearly 800mm longer than a Bentayga, 327mm taller and 225mm wider. It weighs the same as two and a quarter GR Yarises or just over three Elise Sport 240 Final Editions. Climb way up into the cabin and the impression of size doesn’t fade one bit. Perched way above even the biggest SUVs, gripping the huge steering wheel and surveying the really rather nice interior, everything feels faintly ludicrous. However, there is something strangely gleeful about being in control of something so over the top. When the engine booms into life that excitement builds, too.

The blown 6.2-litre V8 is really, bone-jarringly loud. It’s how you remember the General Lee sounded, except that when you blip the throttle there’s an intense supercharger whine that cuts through the bass. How can it weigh 2880kg and yet have no sound insulation? Who knows? At this moment, who cares?

Fittingly, given the scale and the demented soundtrack, everything the TRX does is exaggerated. The 325/65 R18 Goodyear Wrangler Territory tyres have a 35-inch diameter and, although they’re quiet and precise by off-road standards, they slap and rumble against the surface and the TRX squirms on fist-sized treadblocks. This disconnect, piled on top of the sensation of body and frame being slightly out of kilter that’s peculiar to pickups with separate chassis, means that the TRX is not exactly what you’d describe as ‘agile’ on twisting roads.

The Hellcat engine is hilariously vocal but even 650lb ft can’t quite move the TRX with the vigour you’d expect. The eight-speed automatic gearbox thumps home shifts but the performance just isn’t quite as comical as you’d hope for. It feels quick but nothing like as brutal as, say, the aforementioned Bentayga at full flight. And even in Baja mode the balance, should you choose to ignore the howling tyres, is very much nose-led. Unlike Ford’s super-truck, the genre-defining Raptor, there’s no rear-drive mode here. But then the idea of getting six metres of truck sideways on the road doesn’t really bear thinking about. Instead simply revel in the noise and bathe in the aura of invincibility. You really do just want to aim it at parked cars or small buildings to see if it might just drive clean over the top of them without noticing.

Yet for all the drama the TRX is mildly disappointing after the initial five minutes of exposure. It’s loud and raucous but never feels good for a 4.5sec sprint to 100kph and the weight is all-pervasive. Certain SUVs really do shrug off their size and mass but the TRX never even gets close. It’s more exciting than a Raptor and the chassis has a little less wobble… but the Ford copes better on the road and rear-drive mode almost makes you forgive a flag-waving pickup with a dull 3.5-litre EcoBoost V6, too. Almost.

Then tyres meet dirt, gravel or sand. And suddenly the TRX feels at home. Baja mode allows plenty of tail slip, the supercharger screams its approval and those Bilstein dampers get to work. The TRX doesn’t quite float over the surface but it’s remarkably fluid and breathes with rapid, wicked-looking dips and humps. When the wheels do lose contact with the surface the recovery is quick and decisive and the TRX literally never bottoms-out. This near three-ton missile will sail for miles at five or six feet in the air and reconnect with serene calm. It’s quite an experience to land a jump that your brain tells you should result in dampers bursting through the bonnet, a broken sump and a long wait in the middle of nowhere for recovery, only to find yourself accelerating hard towards the next crest ready to do it all again.

So, should you find yourself in the position to experience this sort of terrain on any given weekend, the TRX is quite the tool. Imagine the joy of a free trackday every weekend, only the track goes for miles in every direction and you can choose any configuration your imagination can come up with. And during the week the noise, faintly absurd aesthetic and the sheer unapologetic lunacy of the Ram 1500 TRX might just keep you amused and make that asking price a little easier to swallow. It is a fantastically stupid passenger vehicle. However, if you truly immerse yourself in this world and commit to weekends jumping dunes and washing sand and grit out of your hair and eyes, there is a better way. Small, light and utterly focused, something like a Polaris RZR is surely the answer. By all means get a pickup and live the American dream. As long as it’s towing a turbocharged ATV behind it, you don’t need to spend quite this much money.

So its $69,995 cost in the US might sound like a bargain considering the amount of truck being purchased, but if your intention is to bring it over to this side of the Atlantic, a best guess is something like the USD value in British pounds once fees, taxes and shipping costs are taken into account.

Once here, you’ll not only have to deal with its sheer bulk – it’s a big pickup, even by American standards – and some, ahem, chunky fuel bills. Even when converted into the more friendly imperial rating we use over here in the region it barely bumps up to 19.6L/100km on the combined EPA cycle. We’d classify anything over 28.2L/100km optimistic.

As for rivals, there’s no one (willing or able) to sell anything like a TRX in the region officially, but if you’re importing a truck anyway, Ford’s F-150 Raptor is the direct alternative. With its twin-turbo V6 engine might be considered less bonkers, but if you’re really keen, Ford’s latest Raptor model is also available with a supercharged V8, only its not road-legal. Even in the USA which is saying something. 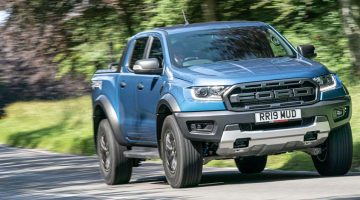